Not lost in time, space or meaning: The Rocky Horror Show, 40 years later 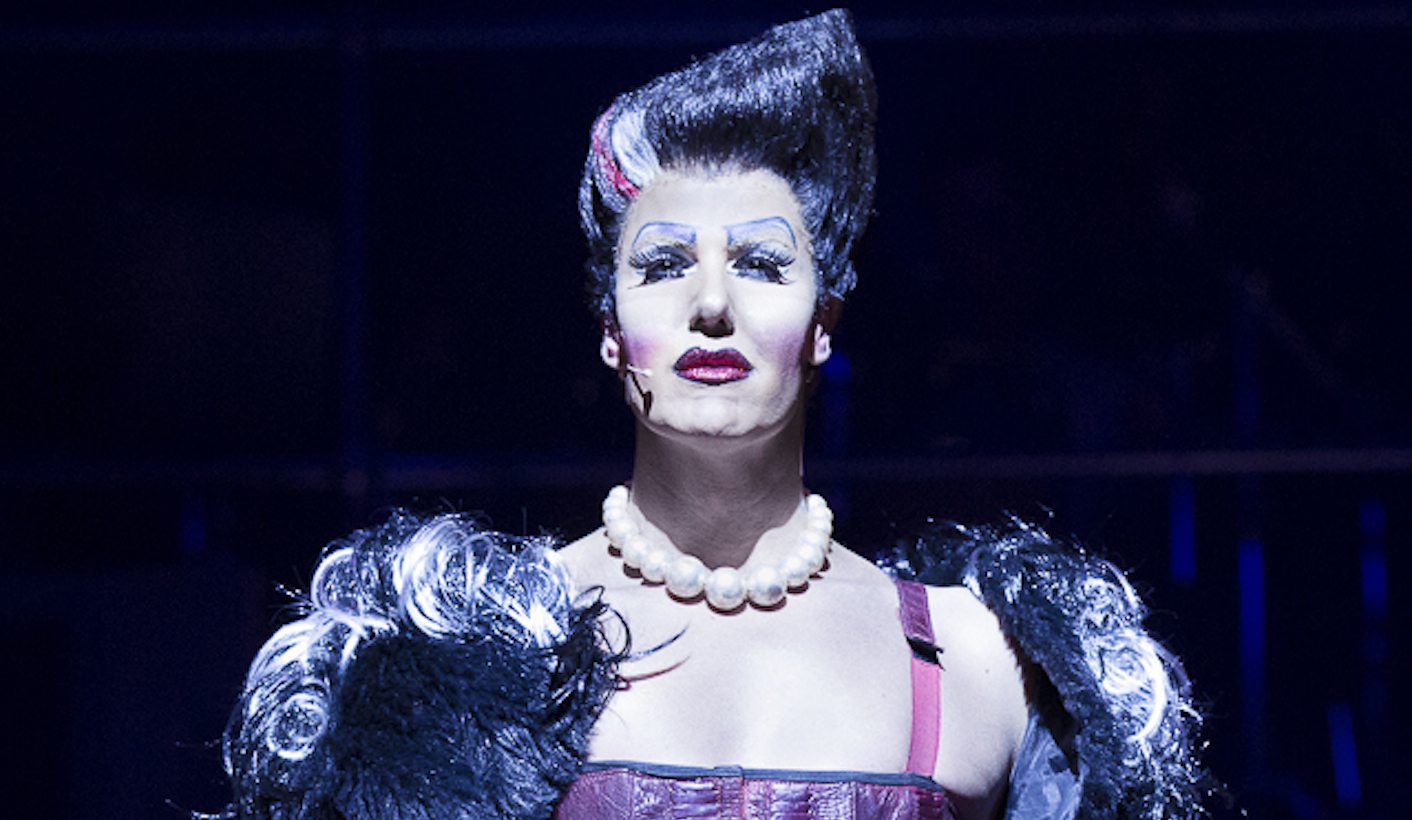 About 40 years ago a handful of lucky South Africans managed to catch a screening of The Rocky Horror Picture Show just before the authorities banned it in the country. Back then, in Apartheid South Africa, the film was hugely transgressive. But does it still have meaning in the 21st century? MARIANNE THAMM took her children to see the stage production at the Fugard Theatre.

Conversation between a mom and her 11-year-old daughter in the car on the way home from the show on a Sunday afternoon (don’t worry, we closed her eyes during the sex scenes):

“Well, it’s about a heteronormative couple, Brad and Janet, who are engaged to be married and who suddenly find themselves and their worldview challenged when they have a flat tyre in the rain and go in search of help. They end up somewhere where fantasy challenges their reality. It’s a bit carnivalesque, you could say. A neutral space where anything is permitted.”

“A couple gets lost and then they learn something about themselves, others and difference when they arrive at a really cool dress up party.”

“Oh, I see. But why are there aliens there?”

“The original film tried to play with several genres – science fiction and horror with a bit of queer camp tossed in. You could say that back then it might have been easier for audiences to deal with polymorphous perversity by rendering it as alien.”

“Why do they kill Frank-N-Furter in the end?”

“I suppose it was because he became too powerful and too abusive. Remember he killed Eddie, his first perfect man. And then he just sort of lost his head, not literally of course.”

“Did you see his fabulous shoes?”

So, here I am 40 years later with my cross-racial queer family. I am surrounded by men dressed in women’s clothing, in the audience and on stage (and a lot of them would self-identify as ‘straight’). There’s even a queer wedding. Nothing is untoward. It is as it should be. For a brief moment I love the 21st century.

Back in 1977 or 1978, I was around 16 when I found myself beholding the thrilling spectacle of Jim Sharman’s film version of Richard O’Brien’s cult musical in a darkened cinema in Pretoria, where it played for two weeks before the country’s shocked censors banned it.

From the first sensual glimpse of those red lips in the opening scene of the film, I felt as if I, and not the cast, had been transported to another planet. It was a place I wanted to go to. Anything to escape the political, cultural and spiritual claustrophobia of the South Africa I lived in.

The soundtrack of the Rocky Horror Picture Show is a deep part of my musical DNA. I know every word, every gesture, every inflection. The shock of seeing the old South African flag in the banquet scene in the film has, for me and with time, become an ironic reminder of that afternoon in the cinema so long ago and the country that thankfully no longer exists.

What started off in 1975 as a small musical comedy has become an enduring “cult” classic, performed still in many corners of the globe. Last year The Fugard Theatre in Cape Town staged a local version, directed by the extraordinarily talented Matthew Wild, and which enjoyed a sold-out run for months on end.

The show’s back with one or two changes to the exceptional cast and here I am experiencing it live for the first time as an adult, a free queer person, a mother and a raging Rocky Horror fan (although I still have issues with the ending and the fact that Brad and Janet – while they have tasted the fruits of freedom, opt to return to their normal lives – or so we are led to believe).

I also can’t help thinking how the local production could have added an “edge” to it if Frank-N-Furter’s perfect man, Rocky, had been black. How this simple switch would have provided a different kind of traction in a piece that is, let’s face it, very white. By hey, that’s just me. (And I was of course thinking about my daughters and what they might internalise…but we’re here for the fun, not the politics of transformation).

Tim Curry has of course indelibly stamped himself on Frank-N-Furter, the sweet transvestite from Transylvania, and it takes some claiming to make him your own. This the extraordinary Brendan van Rhyn does with towering authority. He is a fantastically domineering and funny Frank-N-Furter and my guess is that for the actor, this is the role of a lifetime. He is a delight to savour and watch.

The same can be said for Andrew Laubscher as Riff Raff and Daneel van der Walt as Magenta. Jenny Stead recast as the virginal “slut” Janet, is really almost as good as Susan Sarandon in the movie. Stead is highly watchable in a cast full of scene-stealers and her voice too easily deals with the demands of the songs and anthems. Stead brings tremendous wit and personality to her Janet. Paul du Toit as the “arsehole” Brad too is wonderfully nerdy and nervous.

This is truly an ensemble piece and each player brings to their character a slick and highly watchable performance. TV soap star Terence Bridgett has been cast as the narrator, The Criminologist, an important role in terms of playing the interlocutor for the bewildered audience. Bridgett has opted to play the character with tad too much smug camp – but he brings much self-conscious silliness to the part.

Design by Tina Driedijk, Daniel Galloway and Penny Simpson is breathtaking. There were many times when my children leaned over and asked, “How did they do that?”

Musical supervision and direction by the veteran Charl-Johan Lingenfelder and choreography by Louisa Talbot is flawless. This local production showcases the talents of a range of extraordinarily talented South Africans, which is why this Rocky Horror Show has also deservedly raked in heaps of awards.

It is fascinating to watch people who would usually feel uncomfortable in queer spaces feel so comfortable in this one. Is it because in the 21st century the frisson of transgression of queer sex has been defanged? Is it because the entire spectacle is no longer transgressive enough in a world where equality (for some) is a driving future vision? Who cares? It’s a great night out at the theatre. DM