Letter from Stockholm: The rise of Sweden’s feminist party 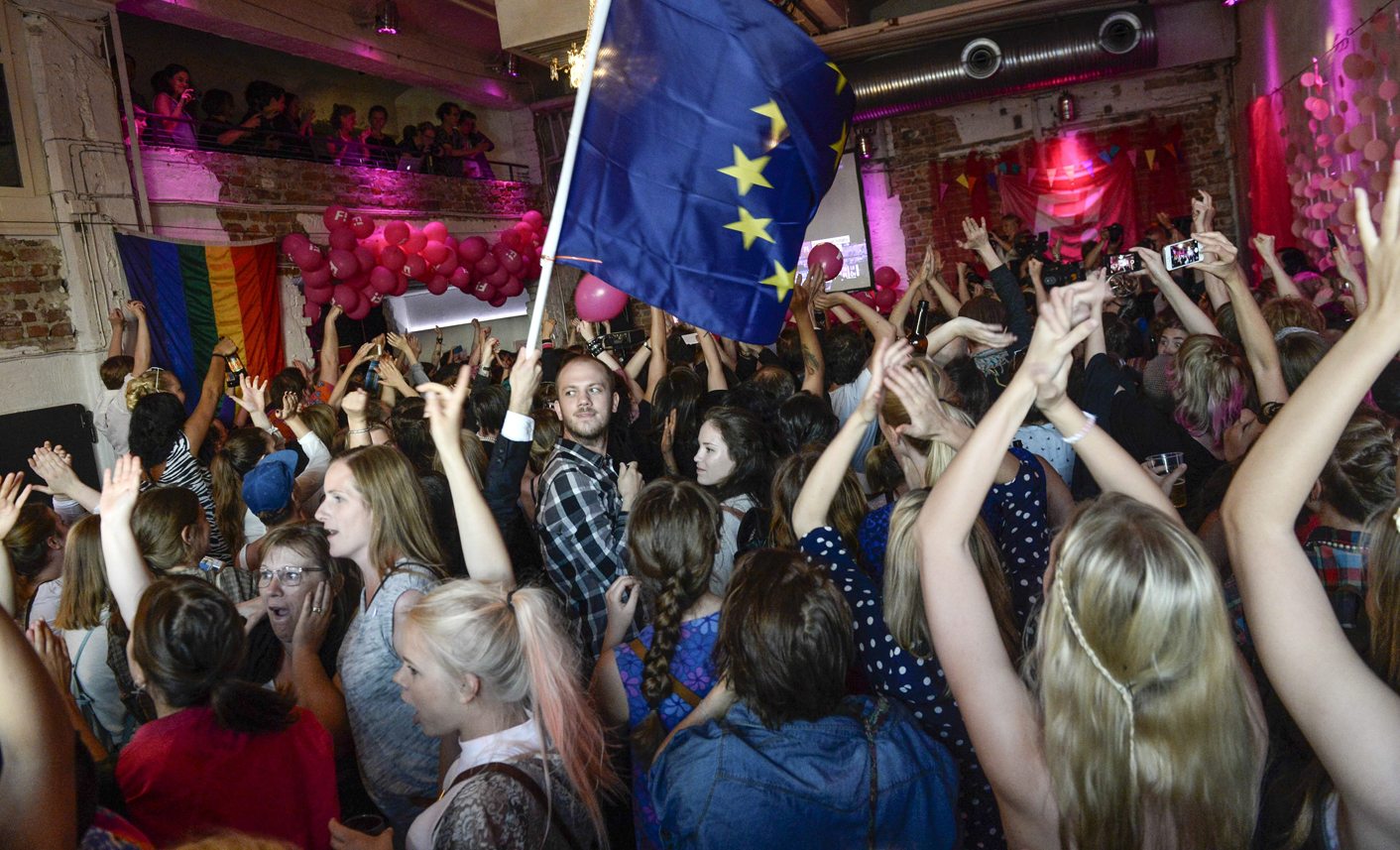 There are a number of special things about Sweden’s Feminist Initiative. For one, it has received generous funding from Benny Andersson – better known as “Benny from Abba”. For another, its leader once advocated introducing a “Man Tax”. But the Feminist Initiative is no joke: earlier this year it became the first feminist political party in history to win a seat in the European Parliament. REBECCA DAVIS investigated why a country already praised for its gender equality would need a feminist party in the first place.

Sweden has one of the highest employment rates for women in the world. There are more women than men enrolled in Swedish universities. A total of 44,7% of Swedish parliamentarians are women. When couples give birth to a baby, or adopt one, parents are entitled to 480 days of parental leave, with the intention being that men and women take equal time to bond with the child.

(In South Africa, by contrast, groups like Sonke Gender Justice have been lobbying for paternity leave for men to be increased to ten days. Then again, some Swedes pay up to 70% of their monthly salaries in taxes.)

Sweden was one of the first countries in the world to criminalise marital rape. Being a sex-worker in Sweden is legal, but paying one is not: a very Swedish solution to trying to clamp down on transactional sex without hurting women.

In recent years it has lost its top place in the World Economic Forum’s Gender Gap Index to other Scandinavian countries, but considered by almost any practical metric you can think of, Sweden is one of the best places in the world to be a woman.

Indeed, so much attention is paid to the wellbeing of women in certain areas that some politicians voice concern that without vigilance it is Swedish men who may suffer. “For instance, there is much more interest within Sweden in breast cancer than prostate cancer,” Dr Barbro Westerholm, a veteran parliamentarian for the Liberal party, told me.

In 1972 the Swedish government took a decision to make gender parity a central issue for Sweden, both politically and ethically. Among educated metropolitan Swedes there appears to be little social stigma attached to either women or men labelling themselves as a feminist – if anything, in fact, the opposite. “But of course you are a feminist, unless you are stupid,” one Swede put it to me with characteristic bluntness.

Yet despite this apparently utopian approach to women’s rights, not everyone is satisfied that enough is being done. Out of this discontent grew the Feminist Initiative (FI), a political party founded in 2005. The FI has thus far failed to win any seats in the Swedish parliament. But then something happened to make people sit up and take notice. In May this year, the FI unexpectedly won 5,3% of the Swedish vote in the European parliamentary elections: enough to secure one Member of the European Parliament (MEP) seat. Suddenly, the FI seemed rather more like a force to be taken seriously.

The FI’s leader is a former leader of the Swedish Left Party called Gudrun Schyman, who has been a vocal political feminist in Sweden for many years. “I think she is the most brilliant politician in Sweden,” Dr Westerholm said. “I just don’t agree with what she wants to do.”

A recovering alcoholic whose honesty about this is thought to be appealing to voters, Schyman has made headlines on numerous occasions. In 2002 she said “the same norm, the same structure, the same pattern” of patriarchy is found in Sweden as in Afghanistan under the Taliban.

In 2004 she was reported as having proposed a “Man Tax” for men to take collective economic responsibility for financial losses sustained due to violence against women.

In 2010, Schyman pulled an izikhotane stunt, though to make a very different point. The FI leader publically set fire to 100,000 kronor (over R155,000), to illustrate how much less Swedish women collectively earn than Swedish men for a minute’s work. The money was donated by a Swedish ad agency.

“I can understand that many are outraged by this,” Schyman said at the time. “Many will say that there are plenty of worthy causes to spend this money on. But we are not a charity, we are a political party.”

The issue of wage inequality between women and men is one of the FI’s rallying causes, party representatives told the Daily Maverick in Stockholm on Friday.

“The situation is still that Swedish women earn 4,400 kronor [R6,849] less [per year],” parliamentary candidate Lars Gårdfeldt said. “Every week women do seven more hours of unpaid work at home than men. Every third woman in Sweden will receive violence from men.”

Gårdfeldt is one of an estimated 20% of the FI’s members who are men. When the FI was formed, he says the party was the target of ridicule from Sweden’s tabloid media, who characterised them by means of the old feminist stereotype as a bunch of women with luxurious underarm hair.

The FI’s Johanna Grant-Axem says that although the government talks a good talk on gender equality, there is often a gulf between rhetoric and practice. One of the laws which looks great on paper but doesn’t work out quite as well as it should in action is that generous paternal leave allocation. Though the idea is that the paternal leave should be shared equally between women and men, the reality is that women end up taking 76% of the leave and men 24%.

But what may have contributed most to the FI’s recent success is not only a concern about gender inequality, but the rise of another party on the far end of the political spectrum. The Sweden Democrats (SD), a far-right anti-immigrant party, has seen their support swell in recent years along with other far-right political movements across Europe. In 2012, a leaked video showed an SD parliamentarian and other party members “verbally assaulting a Kurdish-Swedish comedian and then arming themselves with iron rods”, according to one report.

In times of economic recession far-right parties tend to flourish, and Sweden is no exception. In the 2010 general election, the SD won 20 parliamentary seats. When you mention the SD’s recent success, many Swedes are visibly embarrassed by the resurgence of this political tide in a country which prides itself on its respect for human rights.

It is this concern that the FI appears to have tapped into, by presenting itself as the polar opposite of everything the SD stands for. The FI campaigned in the European elections on a slogan of: “Out With Racists, In With Feminists!”, with its leaders drawing parallels between the threats posed by the rise of the far right to immigrants and to women.

“If you look at their agendas you can see that they want to weaken human rights and it’s always for women and for immigrants,” Schyman told Reuters.

The FI took their commitment to anti-racism a step further by sending a Roma woman, Soraya Post, to take up their seat in the European Parliament. The Roma people, widely disparaged as “gypsies”, face some of the worst discrimination in Europe. Post is Sweden’s first ever Roma MEP.

But of course, the FI wants representation in the Swedish parliament as well as the European parliament. Currently polling at around 3,8%, the party needs at least 4% to be represented in parliament. Grant-Axem says the other Swedish left parties are doing their best to paint a vote for the feminists as a wasted vote. Others say the party does not have the required depth on issues beyond women’s rights. One Swedish journalist told me that despite being a passionate feminist, she would not be casting her vote for the FI in the upcoming elections because “I still care about the economy”.

The Liberal party’s Westerholm voiced the same reservation, pointing to a feminist party established in Finland in the 1990s which splintered under the difference of opinion within the party on issues unrelated to women’s rights – energy, fishing policies and so on.

But whatever happens in the September elections, one effect of the FI’s recent success has been to push other parties to put gender issues higher on their agenda. As a recent article in the Washington Post argues, social movements which become political parties can “change the behaviour of the other parties in the system in ways that movements remaining outside of formal politics cannot”. Perhaps there’s a lesson there for South African activists. DM

Photo: Party workers at the Swedish Feminist Initiative, a feminist political party, jubilate to the exit polls that make the party Sweden’s second biggest party in the European Parliament elections in Stockholm, Sweden, 25 May 2014.  EPA/MAJA SUSLIN