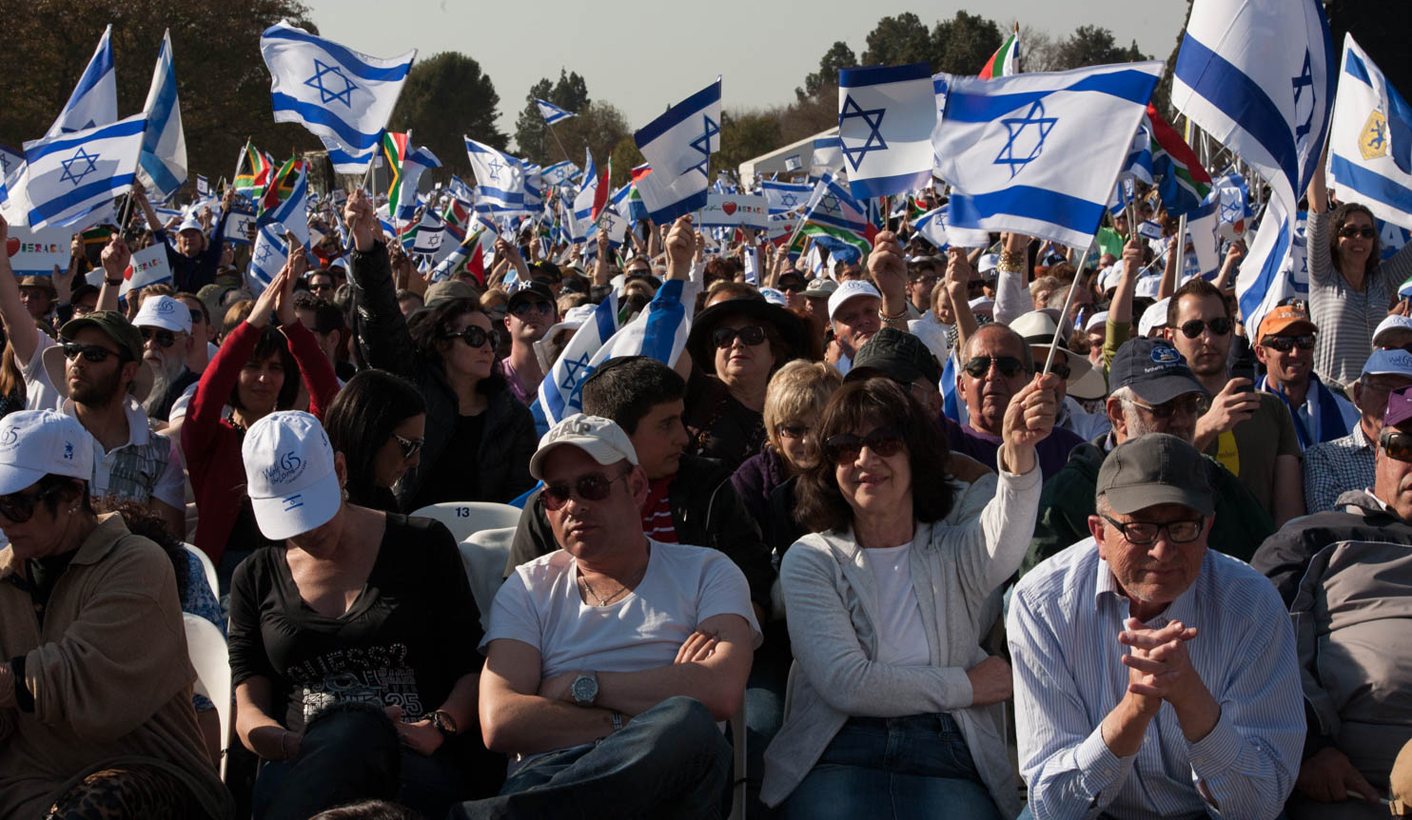 Palestinian groups planned and instigated the war against the democratic and peace-loving Israel, which will always survive despite attacks and criticism from those who support terrorists. That was the message from Israeli supporters at a rally in Johannesburg on Sunday. Not everyone agrees, to say the least. By GREG NICOLSON.

The hassle was probably my fault. I didn’t register for the event in Linksfield and was told to turn back. After some pleading, I pulled over and the car was searched, a bomb squad did its thing. ID and press documents were checked. Then the questions: Why was I there? Where do I live? What do I plan to report on? What are my views on the conflict? Security, police on the outskirts, a huge private security presence inside, was intense. “Don’t incite our people,” said the security officer as I was waved into the Israel solidarity event.

Attended by over 10,000 people, according to organisers, Sunday’s event was prompted by the ongoing criticism in South Africa of Israel, and speakers were on the defensive. A counter-rally against the “celebration of death and destruction”, held by Jewish Voices for a Just Peace, was held outside the park where the event took place.

After almost a month of fighting in Gaza, 1,775 Palestinians have been killed, reported to be mostly civilians, with 64 Israeli soldiers killed and three Israeli civilians. Fighting intensified when Israel sent in ground troops to dismantle the underground tunnels used by Hamas for smuggling into the blockaded Gaza and to launch attacks into Israel.

Speakers said the event was unprecedented in South Africa and claimed the thousands in attendance represented millions across the country who support Israel. Since the conflict flared, there have been protests across the country in support of Palestine and vocal condemnations of Israeli aggression.

Israeli ambassador Arthur Lenk said the large attendance proved false the theory that SA was anti-Israel. “South Africa loves Israel and I’m here to tell you Israel loves South Africa,” he said to cheers. He lauded Israel’s Iron Dome defence system that has provided a defence to the rockets Hamas has fired into the country. “Iron Dome is a super hero. They should make a movie in Hollywood about it because it saves lives. It saves lives of Jews, of Christians, of Muslims, of Palestinians.”

South Africa’s Chief Rabbi Warren Goldstein said South African citizens have a democratic right to support the state of Israel and the event was a response to the anti-Israeli utterances in the news and on social media. Goldstein said the group gathered to say, “We are not afraid. We are proud of who we are… We have the cause of justice on our side.” For generations, people have been trying to intimidate the Jewish people, he added, but they will survive to tell their own story. He received huge cheers when he said the Israeli military does its work with respect for civilians.

South African Zionist Federation chairman Avrom Krengel continued the patriotic agenda. Jewish people suffered thousands of years of persecution, but that changed in 1948 when Israel was established, he said. “We will never be defeated again. We will never be alone again… We shall never surrender again,” said Krengel. “We will never allow ourselves to be herded into ghettos or gas chambers again.” He said the world had turned upside down by supporting Palestinian groups such as Hamas and Islamic Jihad rather than democratically elected Israeli leaders.

The event heard messages of support from the African Christian Democratic Party’s Kenneth Meshoe, the Inkatha Freedom Party, and the Shembe church. Cope members were also in attendance.

A prayer was dedicated to the Israeli soldiers. Speakers condemned Hamas, again and again, as terrorists who are to blame for the conflict and use their people as human shields. It is they who are to blame for the violence and deaths, break ceasefires, and must be de-militarised, speakers said. They emphasised that they want peace – doves were even released – and some speakers said a two-state solution was needed.

First and foremost, however, was the sentiment that Israel and Jewish people are under attack both by rockets and in public discourse and the community needs to unify, show its support, and assert itself above anti-Semitic vitriol.

Outside the Huddle Park grounds in Linksfield, a group gathered to protest against the event. While there was fear of potential violence, the Jewish Voices for a Just Peace demonstrated against the pro-Israeli event in peace. While Sunday’s event was about the Jewish community showing solidarity, not all Jewish South Africans are behind the state, with a petition online calling for Israel’s withdrawal from Gaza and public statements in the newspaper from Jewish South Africans condemning Israel’s use of force.

On Sunday, United Nations Secretary General Ban Ki-moon condemned the killing of 10 Palestinian civilians in a UN school where thousands of civilians were sheltering, the second attack on a UN school in a week. “The attack is yet another gross violation of international humanitarian law, which clearly requires protection by both parties of Palestinian civilians, UN staff and UN premises, among other civilian facilities,” said Ban. “This attack, along with other breaches of international law, must be swiftly investigated and those responsible held accountable. It is a moral outrage and a criminal act.”

Many critics denounce Hamas’ launching of rockets into Israel, but the overwhelming outrage focuses on the humanitarian problems and violence committed against Palestinians. Last week, the ANC’s national executive condemned “the ongoing atrocious Israeli ethnic cleansing onslaught across the occupied Palestinian territories” and said it was committing violence with impunity against civilians. On Sunday, SA Communist Party General Secretary Blade Nzimande condemned “this genocidal campaign” against people looking for land and freedom.

Rights group Section 27’s executive director Mark Heywood said Israel’s military action was not in self-defence but was an “inhumane and illegal war of aggression in violation of all international laws and treaties”. Many Cosatu-affiliated unions have also made statements condemning the actions of Israel.

Amnesty International said on Friday there was mounting evidence that war crimes had been committed by all parties involved. The organisation encouraged both Palestine and Israel to become a party to the Rome Statute and accept the International Criminal Court’s (ICC) jurisdiction. Amnesty said it was encouraged that Palestinian leaders indicated they wanted to join the ICC and had written to the UN Security Council asking them to recommend the ICC investigate the current and past atrocities, which was unlikely to happen with the United States being a key ally of Israel.

Speakers on Sunday thanked President Jacob Zuma for his committed involvement and for sending a South African envoy to the Middle East to discuss the issue. While it’s unclear whether the South African team made any significant advancements, high-level diplomatic discussions pushed by the UN and United States secured a temporary ceasefire on Friday, only for fighting to resume within hours. According to news reports on Sunday, Israeli troops were leaving Gaza and may have completed their mission of dismantling as many of the underground tunnels as possible. Discussions on ending the conflict are set to resume again soon in Cairo.

Families and friends enjoyed the Israeli solidarity rally on Sunday, where speakers seemed to have a blind belief that what the Israeli military is doing is necessary, just and in the interests of peace. The event proved their clearly is support for Israel in South Africa, but the necessary security casts doubt on just how much.

The security, at least, might have been justified. According to the SAPS Twitter feed, on Sunday a Palestinian national was arrested outside the solidarity event with an arsenal of weapons. He had an unlicensed rifle, a revolver, a shotgun and three knives.