Slaying the dragon-slayers: The IDF, Hamas, and the painfully slow death of God 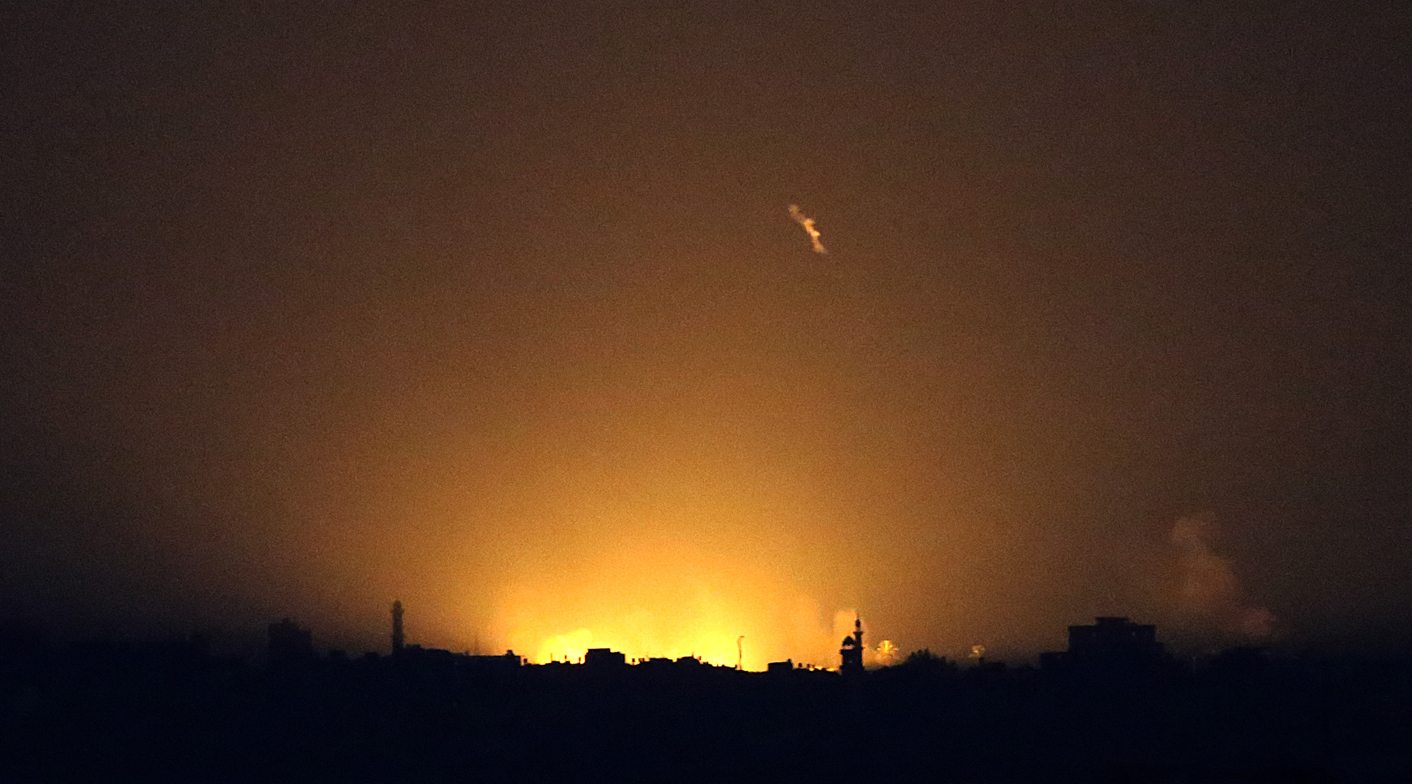 According to Friedrich Nietzsche, who knew a thing or two, humanity killed the God of the Old Testament in 1882. Out in the land of Canaan, the sons of Isaac and Ishmael still haven’t heard. KEVIN BLOOM wonders when the One True God, the God of the poets, will make Herself known.

Brew us the magic in which all limits dissolve,
spirit forever bent to the fire!
The fathomless limit of evil, first, which revolves
also around those who are resting and do not stir

Before they are anything else, these lines from Rainer Maria Rilke’s The Sonnets to Orpheus are a prayer of repentance, an apology to the long-suffering Tao, from the delinquent “us” that is modern humanity. They are at once a heartfelt affirmation of our infinite potential and a heartbroken recognition of our darkest shadow, which, when viewed as a psychic fact, is nothing more—and nothing less—than our collective inability to submit to the rigors of our ongoing evolution. To yield to the authority of history, suggests Rilke, is to return willingly to the classroom of an all-too-familiar hell.

These lines made me think of that guy at the restaurant in Johannesburg last week, who responded to my smile of greeting with his special death-stare for traitor Jews. “Oh yeah,” he said, “It’s you, Hamas!”

Thank God, then, for poetry. And thank God too for the kind of poetry in which the God of Abraham/Ibrahim, the God of vengeance, the God of the patriarchy, is a God dead and buried. Rilke wrote The Sonnets to Orpheus in 1922, four decades after Friedrich Nietzsche, a major influence on his sensibilities, had put the old guy in His grave. “God is dead. God remains dead. And we have killed him,” the philosopher had portentously announced in The Gay Science in 1882. “How shall we comfort ourselves, the murderers of all murderers? What was holiest and mightiest of all that the world has yet owned has bled to death under our knives: who will wipe this blood off us?”

Who indeed? And why, like the cuckolded husband who is always the last to hear, do the sons of Isaac and Ishmael carry on as if nothing has changed?

Somehow, although they may be linked, the answer to the second question comes to mind a lot more readily than the first: because to admit to the death of this “murderous” God is to know that the killer is you, that the demons are inside your head, which kind of takes the joy out of calling someone a heretic or terrorist or Nazi.

From my own limited perspective, one consequence of the latest Gaza conflict has been that my previous harangues against the IDF have caused the pious to hurl such labels at me. What’s more, they have done so with a conviction so pure, a faith so inviolable, that the single response I have managed to muster has been a warm and genuine, “Thank you!” It appears, then, that not only am I a member of Hamas, as per that guy in the restaurant last week, I am also, in turning the other cheek, a Jew who has been corrupted by Jesus. Of course, the Nazi label is a different order of magnitude entirely, and although I haven’t quite earned that one (yet), the fact is that there are a growing number of devout folk worldwide for whom use of the term is now as acceptable as when the Nazis actually existed.

Jews to Jews, Jews to Moslems, Moslems to Jews, Moslems to Moslems, Christians to Jews, Jews to Christians—the projections and counter-projections are as multifarious as they are endless, the psychically launched Swastikas and Heil Hitlers as abundant as they are misunderstood. Dogmatic Abrahamic monotheism, if ever it was on the wane, is making a glorious and wrathful comeback; the fundamentalists are witnessing their long-awaited Apocalypse, the faithful are very soon to be saved. And so the lonely man with no rabbi or priest or mullah, the lonely man who must endure without religion his doubts, is left to lapse into apostasy upon apostasy: if Reichsführer Heinrich Himmler and his Einsatzgruppen were resurrected for a week or two, so as to ride in their tanks through Gaza and southern Israel, would they congratulate themselves on the victory?

The thought-experiment is instructive, if only to show that what’s occurring in this benighted region of the world is not, and has never been, Nazism in its full and complete form. That said, there are a number of good reasons to draw a general comparison between the modern IDF and the armed forces of the Third Reich. Lest my pious brethren assume I am the only one making the comparison, and are perhaps gathering right now a posse to deliver unto me a stoning, I should probably cite the words of Avraham Shalom, former head of Israeli internal security service Shin Bet, who said the following to the camera during the filming of the 2012 documentary The Gatekeepers:

“[Israel has become] a brutal occupation force similar to the Germans in World War II. Similar, not identical. And I’m not talking about their behaviour toward the Jews. That was exceptional, with it’s own particular characteristics. I mean how they acted to the Poles, the Belgians, the Dutch, to all of them… the Czechs. It’s a very negative trait that we acquired, [Israel has become], I’m afraid to say it…cruel. To ourselves as well, but mainly to the occupation.”

This cruelty of which Mr Shalom speaks—and it helps to bear in mind that we’re referring here to a man whose job it was to defend, by any means necessary, the integrity of Israel’s borders—is, according to him, a relatively recent phenomenon. The Gatekeepers, which is a remarkable compilation of interviews with no less than six former heads of Shin Bet, takes the line that Israel lost its innocence in 1995, when Prime Minister Yitzhak Rabin was murdered not by an Arab but by a Jew. The film reminds us, through the lived experiences of these security mavens, that Rabin was the only leader of the Jewish state to ever make a serious and concerted effort to coexist peacefully with the Palestinians.

Which is exactly why he was assassinated by Yigal Amir, a Yahweh-inspired nutjob whose core beliefs were, a) that Israel’s true borders were those as defined by the Patriarch Abraham (that is, from the Nile in Egypt to the Euphrates in Iraq) and b) that the golden dome on the Temple Mount in Jerusalem had to be destroyed before the Jewish Messiah, in fulfillment of the Apocalyptic promise, could come down from Heaven and make everything alright.

Yes, as unbelievable as it may seem, given that we have gone to the Moon and discovered the power of the quantum and all those other wonderful things, we are still here in the collective mud of our man-in-the-sky superstitions. Thank God, then, that the real God is not the Bible School version in the minds of the religious nuts and literalists; thank God that the real God is the unfathomable one in the souls of the mystics and poets—Rilke’s “magic in which all limits dissolve,” Emily Dickinson’s “beauty that is not caused,” TS Eliot’s “still point of the turning world”.

Meaning that we may have found our answer to Nietzsche’s question above. As the mystics and poets have been telling us for millennia, the dragon was never out there, it was always in here. To hunt down the dragon and slay it, to take the hero’s quest literally, has always meant to hunt down and slay ourselves… if we can’t make peace with the dragon, we are ultimately all little Hitlers, having our little temper tantrums in traffic, throwing our little iPads against the wall.

Also, for the haters who’ve gotten this far in the article and haven’t yet vomited into their mouths, the following from the twentieth century mystic Pierre Teilhard de Chardin may very well do the trick:

Some day, after mastering the winds, the waves, the tides, and gravity,
we will harness for God the energies of love. And then,
for the second time in the history of the world,
humankind will have discovered fire. DM

Photo: Smoke rises after an Israeli tanks shelled in the central Gaza Strip, during a military operation in the east of Gaza Strip, 31 July 2014. EPA/MOHAMMED SABER.