Sh*T the EFF will do: Ban genetically modified organisms 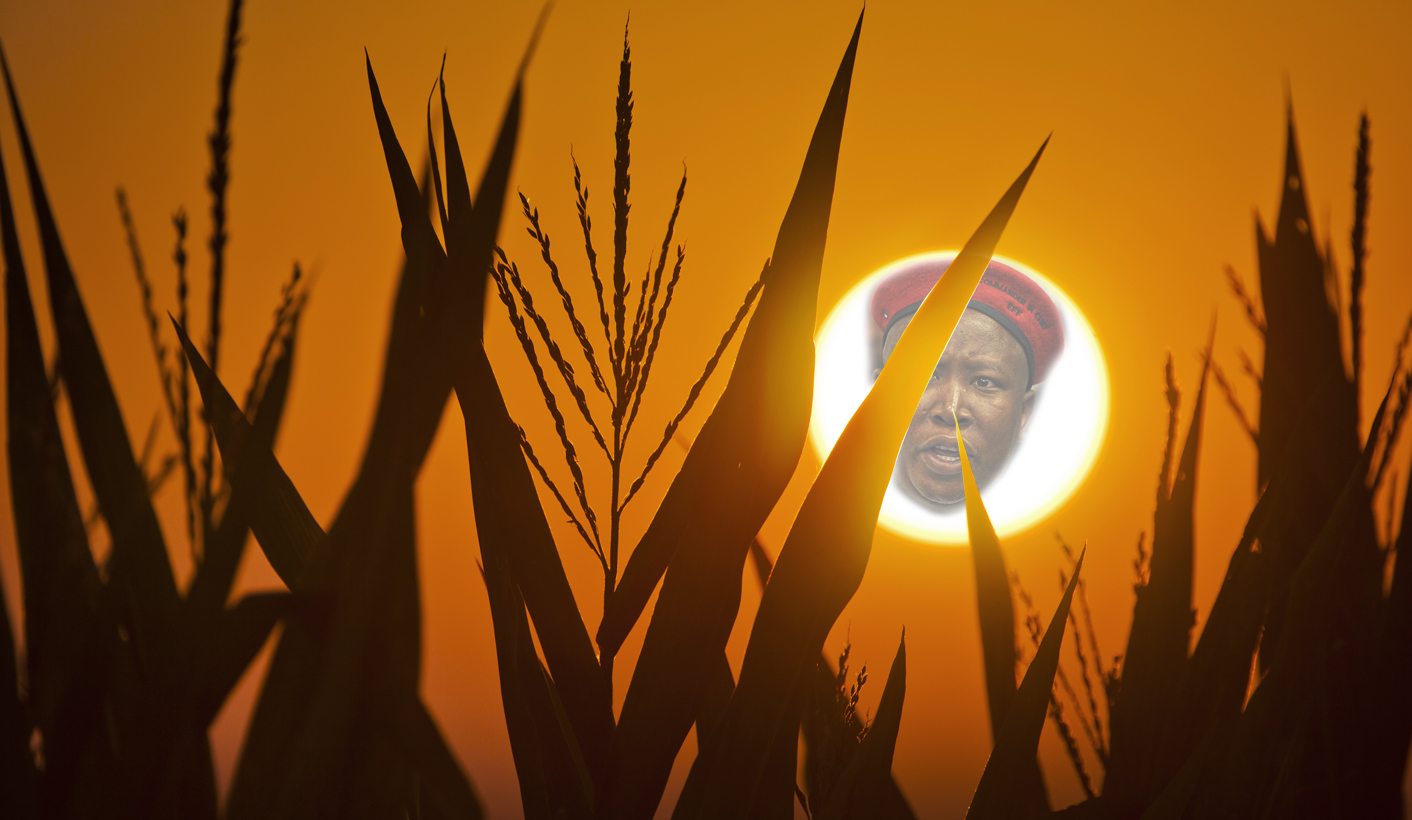 EFF MP and Ideologue In Chief Andile Mngxitama has said that corporate techno-foods amount to “the systematic poisoning of the black body for profit, which has been allowed to happen by the ANC government.” The EFF wants us to eat like its 1899. What does it mean to go against the, um, grain? By RICHARD POPLAK.

Another day, another enemy: on an otherwise quiet Thursday morning, EFF MP Andile Mngxitama went to war with food. Between shout-outs to Palestinians and calls for “our” land back, Mngxitama decried Genetically Modified Organisms (GMO) as the enemy of poor black people. “GMOs are the racist capitalist scheme to poison the world for profits. There is no need for this type of genetic alterations,” he Tweeted. “In SA GMOs are part of the anti black agenda to poison blacks for profits. Maize (+70% GMO) is staple food for blacks. We eat GMOs everyday!”

There’s a Yiddish word for trouble: tsoris. South Africa has plenty of it. Do we really need to pick a fight with our mielie meal?

Strange as it may seem, the use of GMOs has never properly been debated in South Africa, mostly because there always seemed to be something more urgent to print on a t-shirt. Nonetheless, there’s been a fortune of backroom lobbying, academic studying, and concerted NGOing while you were enjoying your morning Franken-toast. When the Genetically Modified Organisms Act of 1997 was passed, nary a maize-eating locust stirred in opposition. In later years, however, critics would come to insist that the legislation was massively skewed in favour of (white-owned monopoly capital) agribusiness.

Ergo, the EFF is unhappy.

In South Africa, all GMOs grow in the shade of the vast Department of Agriculture, Forestry and Fisheries (DAFF). According to DAFF’s mission statement, “[D]epartmental values are underpinned by the ethos of ‘Vuk’uzenzele’ [meaning “wake up and do it yourself”]. The direct interpretation of self-reliance is built upon to capture the spirit of South Africans as people who want to help build a better life for all.” Many things can, and have, been said about GMOs; they don’t quite tap into the individualistic spirit evinced by the soil and the rain and a sturdy dray horse. Nope, the GMO farmer is plugged into the terrifying pace of postmodern technological Progress, tied to a seed brand that comes with a host of necessary accoutrements: fertilizer, insecticide, instructional DVD, etc. In this, GMO’s by their very nature are designed for Big Farming—one doesn’t sow, so much as upload an app.

According to Zakiyya Ismail, consumer campaigner for the African Centre for Biodiversity, every new GMO-shilling hopeful applies to the registrar at DAFF’s David Cronenbergian Biosafety division in order to put a new product to market. They must then follow what anyone in the agribusiness industry would insist is an unnecessarily convoluted procedure of public consultation. Ismail, however, claims that this mandatory process is bogus because of the enormous number of applicants and the lack of meaningful information included in their dossiers. “Everything is confidential,” she told me over the phone. “There’s just too little information for us to consult on it properly.”

There has always one principal argument in favour of GMOs—they solve food security issues by increasing yields while decreasing the cost of production. (That’s mostly by saving on labour, which in this country remains enormously contentious.) But South Africa, along with almost everywhere else on the continent outside of the Sahel, doesn’t suffer from a lack of food per se, but a distinct lack of being able to eat it. According to Ismail, “We had a bumper maize crop in 2012, but that did nothing for hunger alleviation. It doesn’t get distributed to everyone who needs it. There’s lots of unemployment, farm workers are not working, so how can GMOs address hunger in any way?” In other words, there’s no such thing as a free lunch.

We can hardly blame South Africa’s systemic economic dysfunction on a few super-soya beans. But Ismail’s argument is that GMOs are part of a system in which everything is skewed in favour of industry at the expense of the little guy, who simply can’t afford to get into the game. (And lest we forget, under Mngxitama’s liberated Mzansi regime, industrial farms would last about an afternoon.)

Yes, Big Something has always had it out for Small Someone. But are GMO crops poisoning us? Are we going to die because we eat some iGrain? Well, there are all those billion-dollar “organic” industries devoted to keeping hipsters from consuming so much as a blueberry tainted by pesticide or technology. But the Monsantos of the world, while still profiting from the organic “revolution”, insist that their products are entirely safe, and they have found an inadvertent ally in French scientist Gilles-Eric Séralini, who massively overinflated the conclusions of his (horrendous) study of tumour-infested, GMO guzzling rodents. This scandal handed agribusiness a larger version of the cudgel they’ve been using for years: their opponents are pseudo-scientist neo-hippies who couldn’t tell an ear of corn from a hydrangea.

When I reached Mngxitama by phone, he wasn’t buying this line. “My son likes pap,” told me. “Everyday that he eats it, I worry. I am poisoning my own son!” He reminded me that the EFF’s election manifesto clearly stated that, “part of the transformation of food production sector must be driven by a new paradigm—situate the feelings of the people first, and sensitivity to the environment first, before corporate interests.”

His Thursday morning Twitter rant was prompted by a Reuters’ article titled “Brazilian farmers demand Monsanto refund their money for GMO crops that don’t work”. “Those farmers were duped into using GMO,” Mngxitama explained. “This is what those companies do, they dupe you into using pesticide resistant monster wheat, and you must pour more of this stuff into the soil, and soon you are trapped into the seed colonialism of these corporations driving production. It cannot be right for food production to colonized by a food companies.”

The Brazil story is indeed a familiar one: Monsanto and their like are vicious when their interests are threatened, and regardless of the safety of their product, their corporate bedside manner is, basically, a mid-weight knife fighter on four lines of speedy coke. It troubles the Brazilians, just as it troubles many GMO critics, that glyphosate, the main herbicide in industrial production, exacts a hellish toll on the environment, poisoning ground water for future generations while turning the present one into lard-ass butterballs.

And as those Brazilians learned, this isn’t so clearly a right versus left issue. If the neo-libs live and die by open markets and consumer choice, GMOs must be a downer. “Eighty percent of maize and 90 percent of soya in this country are GMO,” Ismail told me. “That means that our food chains are saturated, it all goes into one food chain, it all gets mixed, which then takes away the producer’s and the consumer’s right of choice. And we don’t know that, because labeling is not being applied consistently by producers.”

Welcome to the twenty-first century. But is this genocide by a bunch of guys on John Deeres?

“Oh yes,” said Mngxitama, “this is the systemic mass poisoning of people over time. Capital does not care for lives, and is driven by shock and disaster. If they don’t bomb you, they poison you.”

One thing is certain: as with so much in South Africa, the debate on GMOs needs to be cracked open and a fairer deal needs to be negotiated. At the very least, consumers have the right to know what they’re consuming. And if they happen to feel the better option is starving to death, hey, that’s democracy! “The issue is not being ventilated,” Mngxitama reminded me. “The EFF is the only party that speaks very clearly on banning GMOs. All progressive governments have said no to GMOs. It’s no longer a debate. It’s a question of taking a position. And the ANC and DA have taken a position in favour of multinationals.”

That sound you hear is Cyril Ramaphosa cooing sweet nothings to his fields of alfalfa sprouts.

“You see,” Mngxitama said, by way of signing off, “we are not just people wearing red overalls. We have a clear environmental and ethical policies. We will take this issue to our people, and we will ban GMOs.”

Until then, death by pap. And the less said about the wors, the better. DM

Photo: Corn tassels, which sprout from the top of corn stalks, are silhouetted against an early morning sun outside Eldorado, Illinois, USA, 22 July 2012. EPA/JIM LO SCALZO