The other State of the Nation: Actually, a Good Story to Tell 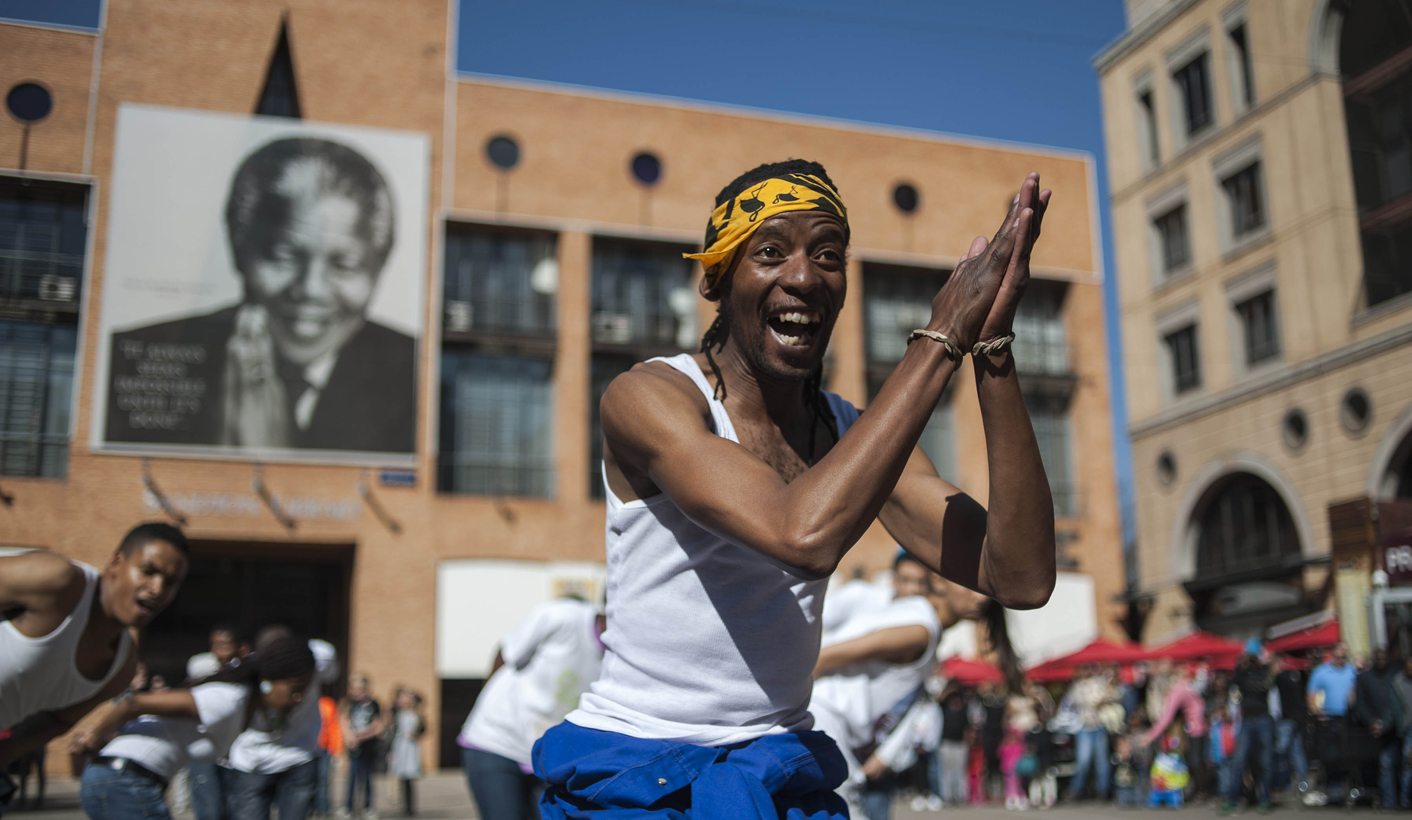 Away from the sound and fury of political rhetoric and point scoring there is a different, and - believe it or not - good story to tell about South Africa’s nine million economically active citizens. Apart from being less concerned with race, all of them are educated, a lot are between 25 and 35, are optimistic about the future, own their own homes and will create wealth through a job in the corporate sector. By MARIANNE THAMM.

If SABC COO, Hlaudi Motsoeneng, is looking for a real good news story, he’d best abandon political coverage and send forth his news teams into the homes and offices of the country’s middle classes – a group of around nine million economically active South Africans – whose habits, dreams and aspirations provide a much more optimistic snapshot of the state of the nation.

Since 2004, the black middle class in South Africa has grown phenomenally from 1.4 million to just over 4.2 million, a graph that the country’s researchers, while everyone agrees the country is still hugely unequal, are saying is one of the most important indicators over the past 10 years.

Overall the country is growing an increasingly “non-racial” middle class with a total of around eight million who earn between R10,000 to R25,000 a month, with an additional one million at the very top end of the pyramid who earn R25,000 or more or “infinity”, as researchers have described this income bracket.

Exactly how we define “middle-class” is, of course, important. There are political definitions depending on the colour of your socks. If you were a Marxist you’d probably define middle-class as the bourgeoisie – an urban professional and merchant class wedged between the aristocracy and the proletariat. If you’re a capitalist, the definition would include the labour ‘aristocracy”, professionals and white-collar workers.

But if you’re a market researcher you’re not really interested in the ideological definition and the formula is pretty simple – follow the money and how it is spent. That, as well as defining your sample by their level of education, investments, income and how this is spent as well as this grouping’s future hopes, dreams and aspirations.

For its recent survey of the country’s some nine million economically active South Africans, online research company, WhyFive, conducted the largest-ever survey, sampling 20,233 South Africans, 49 percent of whom identified as black, 37 percent white, seven percent Indian and eight percent coloured. All of those surveyed earned R10,000 or more. The results are contained in the BrandMapp Survey (formerly Top End Survey), which has yielded some surprising results a few of which are noted here.

Said Brandon de Kock, Creative Director of WhyFive, “Once you earn more than R10,000 a month you are economically active and on a continuum of wealth. If you earn R25,000 a month in South Africa you would, in WhyFive terms, be considered wealthy.”

The sweet spot for the middle class, added De Kock is R15,000 a month.

A Snapshot of the Middle Class

One of the most surprising insights the WhyFive survey revealed is that of the 20,233 people surveyed, 15,558 or a whopping 77 percent felt it was “time we got over the race issue”. Not exactly good news for certain politicians who might keep a race card handy in their back pockets, but then again the middle classes generally don’t wear overalls. Twenty-three percent, however, felt that given our history “it is very important that we continue to be sensitive to the race issue.”

The highest number of respondents in the survey was aged between 35 and 49 (38 percent or 7,674) followed by those in the 25 to 34-year-old bracket at 4,979 or 25 percent. Of those surveyed 6,947 or 64 percent had a diploma while 28 percent had matric, 18 percent a university degree and 15 percent a post-graduate degree, indicating that education is a bridge to employment and the middle class.

An overwhelming majority of those surveyed identified as Christian (84 percent or 16,413 respondents) while three percent were Muslim (645), two percent practiced traditional African beliefs (425), one percent were Jewish (144) while one percent (or 32) thought it was “none of your business”.

Two of the greatest concerns for an overwhelming number of both black and white middle class respondents (82 percent or 16,588) were crime, followed by corruption (75 percent or 15,082). Government incompetence and unemployment also featured as strong concerns for 64 percent while rising food and energy costs were a worry for 58 percent (11,657). Fifty-three percent (10,649) flagged deteriorating education standards as an issue while 52 percent (or 10,596) were concerned for their children’s future. Rising poverty was an issue for 49 percent or 9,976 respondents.

When it comes to debt it appears that South Africans are adopting a head-in-the-sand approach with only 40 percent or 8,041 ticking it as a concern.

When it came to home ownership the survey offered interesting insights with a large section of the middle class, 63 percent (12,825) owning their homes while 37 percent (7,408) rented. Of those who owned homes, 49 percent owned only one while nine percent owned two. Interestingly enough 64 percent (13,023) did not live in gated or security villages while 36 percent (7,209) did.

An enlightening sliver of information for our Minister of Health, Aaron Motsoaledi and his plan for Universal Health Coverage, is that out of the 20,232 people surveyed, 36 percent, or 7,207, subscribed to the biggest medical aid in the country, 30 percent (6000) to other medical aids while 22 percent or 4,446 had no medical aid.

A Snapshot of Entrepreneurs

In relation to entrepreneurship or the “self-employed” the WhyFive survey found that there are about 272,000 (or about 17 percent) of self-employed people among the ranks of the 1,600,000 people with a monthly personal income in excess of R25,000.

According to De Kock, these are people “driving, fuelling and playing a vital role in the economic well-being of our country.”

Nearly 80 percent of entrepreneurs are males and 20 percent of them are black. The survey found that BEE, while it has been a success, “had reduced the desire of skilled black people to start their own businesses and create jobs”.

This was, according to WhyFive, “because as a young, educated, skilled black person it is easier to find a job. So, it’s white males who are starting and owning new businesses, which only serves to reinforce white domination of business ownership in South Africa,” said De Kock.

The largest numbers of entrepreneurs in South Africa were found in KZN followed by the Eastern Cape, Northwest Province and the Western Cape. This could perhaps be best explained by fewer job opportunities in these provinces which forced more people into starting their own enterprises there. Entrepreneurs, the survey found, are older than employees, and also earn more.

How the very rich live

Last year WhyFive conducted the largest ever survey of its kind completed by 21,500 people in the “upper echelons” or “top end” households in the country.

“These are traditionally difficult people to access as the wealthier you are the higher your security fence and the harder it is to get you to fill in a survey,” said De Kock.

The survey revealed that of the 1.6 million “top end” households in the country, five percent have a monthly income in excess of R100,000. The sample represents a minimum of 80,000 individuals at the very tip of the wealth pyramid.

“These are our millionaires and 2,077 of them responded to our 2012 survey. Every single person in this bracket is what we call an economic ‘astronaut’ in an orbit high above the average consumer,” said De Kock.

The database showed that this group is 65 percent male, the average age is 47 and 13 percent of them are black.

“The total top end group shows a leaning towards entrepreneurial activity. But when it comes to ‘astronauts’, a remarkable 73 percent are employed in a company with only 20 percent ticking the self-employed box. These guys have not got rich on their own: they are corporate climbers, the masters of the universe – the kings and queens of conventional commerce,” said De Kock.

An eye-opener, said De Kock, is that this group isn’t just wealthy, they are far wealthier than imagined with an astounding 47 percent earning more than R250,000 a month.

“These extreme levels of income allow them to accumulate substantial assets: the average value of their fixed property is R5.6 million, 39 percent own more than one property and their average share portfolio is worth a tidy R4.9 million. If there’s any good news for the broader economy (apart from whatever taxes they can’t help to declare), it’s that 57 percent owe money on their fixed property, keeping the bond market buoyant. What’s more, 27 percent have been divorced (presumably because they are really ‘married’ to their corporate jobs) so a fair percentage of their accumulated wealth has been redistributed – even if it’s to ex-spouses and legal firms,” he added.

When they’re not making money, these “top enders” listened music, read books and dreamed of travelling. Millionaires didn’t differ much in their tastes although, said De Kock, the response of 63 percent claiming to be ‘interested’ in travel was lower than expected.

The survey indicated that financial savvy was an area of obvious expertise and that 39 percent of millionaires have a “sideline” income in addition to their corporate jobs with 57 percent earning monthly income from their investments. RAs were the most popular investments (58 percent) followed by pension/provident funds at 45 percent and share portfolios at 36 percent.

Said De Kock; “As time passes, we can expect to see a few things happen to the segment – notably a slow and steady shift in the 87:13 ratio of white and black millionaires. But it’s important to remember that what that will represent is an expansion of the segment rather than one group diminishing.”

The most vital thing to remember, said De Kock, is that once you were “in orbit, you really have to mess up spectacularly to come back down to ground.”

“All you need to remain confident about the future and secure in the present – and in that respect, the fact that 67 percent of millionaires feel they are much better off now than they were five years ago – speaks volumes for the upward and onward march of South Africa’s most affluent consumers.” DM

Photo: A young man performs in front of a poster of Nelson Mandela during a performance by a dance troupe in Nelson Mandela Square in Sandton, north of Johannesburg, South Africa, 13 July 2014. EPA/IHSAAN HAFFEJEE