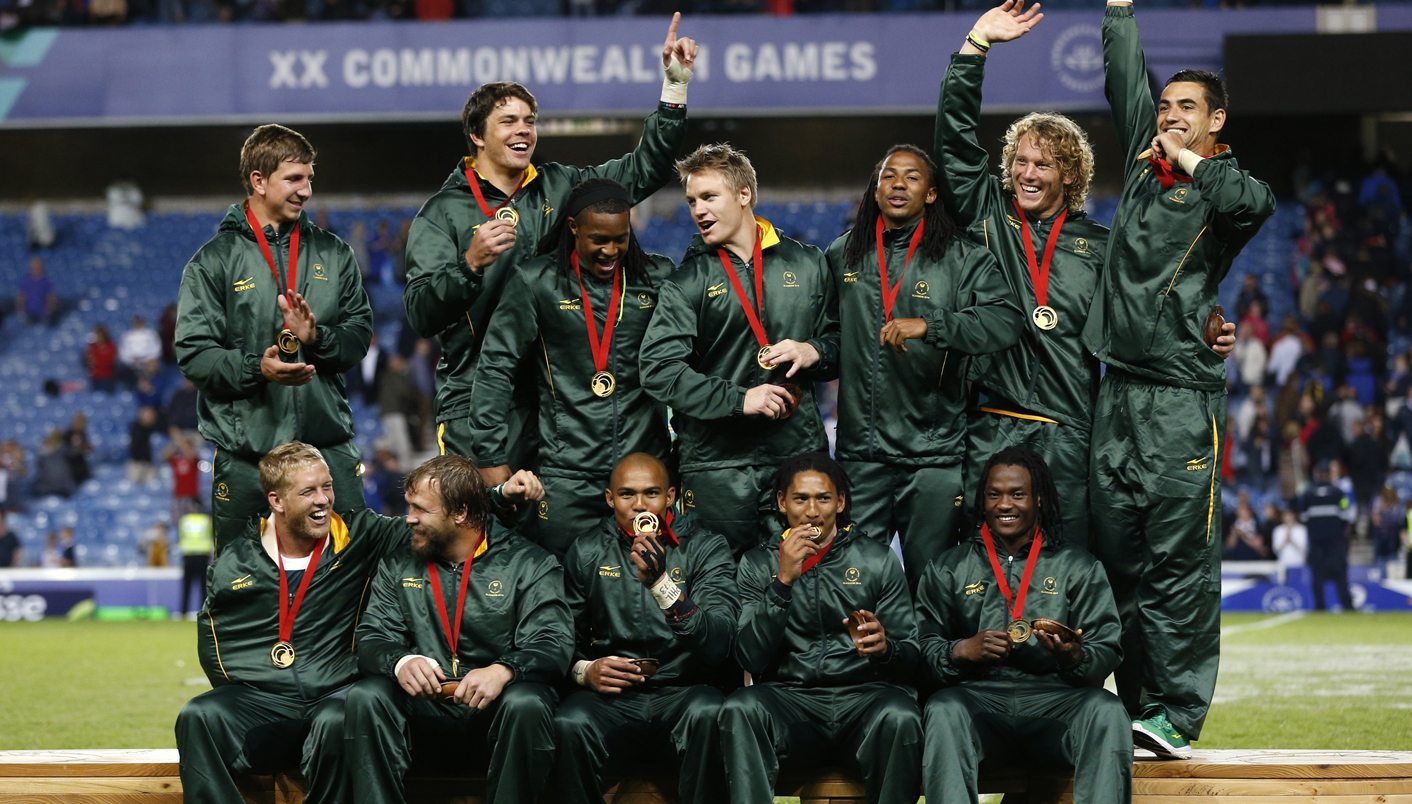 South Africa’s Sevens rugby team claimed gold at the Commonwealth Games on the weekend. It was a nice reprieve from the stagnant Super Rugby matches. And it can only get better from here. By ANTOINETTE MULLER.

No matter how you feel about rugby, it’s hard not to get swept up in a Sevens game. It’s fast, it’s fun, it’s physical, and South Africa are good at it. So good, in fact, that they made history on Sunday night when they won gold at the Commonwealth Games. They faced New Zealand in the final and became the first team ever to beat the island nation since the sport was introduced at the Games.

Sevens divides opinion amongst purists, but from an entertainment point of view, there are few things that come close. This is especially apt when South Africa’s Super Rugby teams have been playing like they’re stuck in the mud. It was a revelation and a welcome relief from what South African rugby fans have had to put up with at times during this season.

The Sevens side’s play was something special and it had commentators from all over the world cooing over their performances. The final against New Zealand had its blips, but there can be little dispute that they were deserved champions. Even when they lost their captain Kyle Brown early to injury, the Blitzbokke did not look fazed or shaken. They held their nerve even after falling behind. Their whole run to the eventual final berth was coated in composure.

Great sporting Games, like the Olympics and the Commonwealth Games, are a completely different beast to the usual way of competing. They’re almost gladiatorial and offer bragging rights to countries who don’t often get to step into the limelight. While South Africa are no strangers to sporting glory, there is nothing quite like winning gold at a major event. Not only is it vital for the team going forward, but it’s also crucial for sparking interest in the sport and ensuring it continues to thrive.

While the Springboks have long been celebrated, the Sevens team has certainly won a few more fans over the weekend. Their performances have also created and reaffirmed a few more sporting heroes.

South Africa centred around Cecil Afrika, the man who could sidestep a Ferrari. He’s only 26 years old, but Afrika has already chiselled out “legend” status in the game. Whether it’s his fleet-footed running on the pitch or facing up to interviews, despite knowing that he stutters, Afrika epitomises everything people crave in a modern athlete. While hero-worship should be done with caution, Afrika has got it all. He is a superb talent, a down-to-earth guy and somebody who is not afraid to take challenges head-on. While athletes have all shown in the past that burdening them with some kind of moral benchmark is unfounded, Afrika makes the seamless transition into being a good role model and athletic enigma. Winning plaudit after plaudit and serving as ambassador for the IRB’s Keep Rugby Clean campaign against doping and South Africa’s Olympic team for the 2012 Games in London, Afrika makes being a star and an all-round good egg look easy.

But he is not the only one. There is no ego in this team. When Neil Powell took over the reins from Paul Treu this year, he said that he still far too often gets distracted by the training sessions. So distracted that he gets involved himself, forgetting that he is a coach now and not a player.

“Sometimes I dive into training sessions, do one or two runs and I blow like crazy,” said Powell, 35, who retired from playing last year.

“I jump into it and then I’m struggling for a week or two after[wards],” he said in an interview last year.

They epitomise the modern-day sporting team. Every day each player’s performance, fatigue and even their mental health is monitored and assessed. Every player fills in a form to help the coaches keep track of how the guys are keeping up with training. Because of the fast nature of Sevens, issues to creep up fairly quickly. If players start to drop weight rapidly, they need to be assessed while a mental coach helps keep the team in check for big games.

It all sounds very robotic, but the team is far from that. The huddles and celebrations after their gold medal win on Sunday was evidence that this is a team who goes far beyond what is ordinarily expected of playing sport together.

In South Africa’s blended fabric of sport and politics it is great bonus, too, that the team is so representative of the rainbow nation. Their success in the great social context of South Africa cannot be underestimated and this is just the beginning. DM

Photo: South Africa’s players celebrate with their medals after defeating New Zealand in the gold medal match of the Rugby Sevens at the 2014 Commonwealth Games in Glasgow, Scotland, July 27, 2014. REUTERS/Russell Cheyne