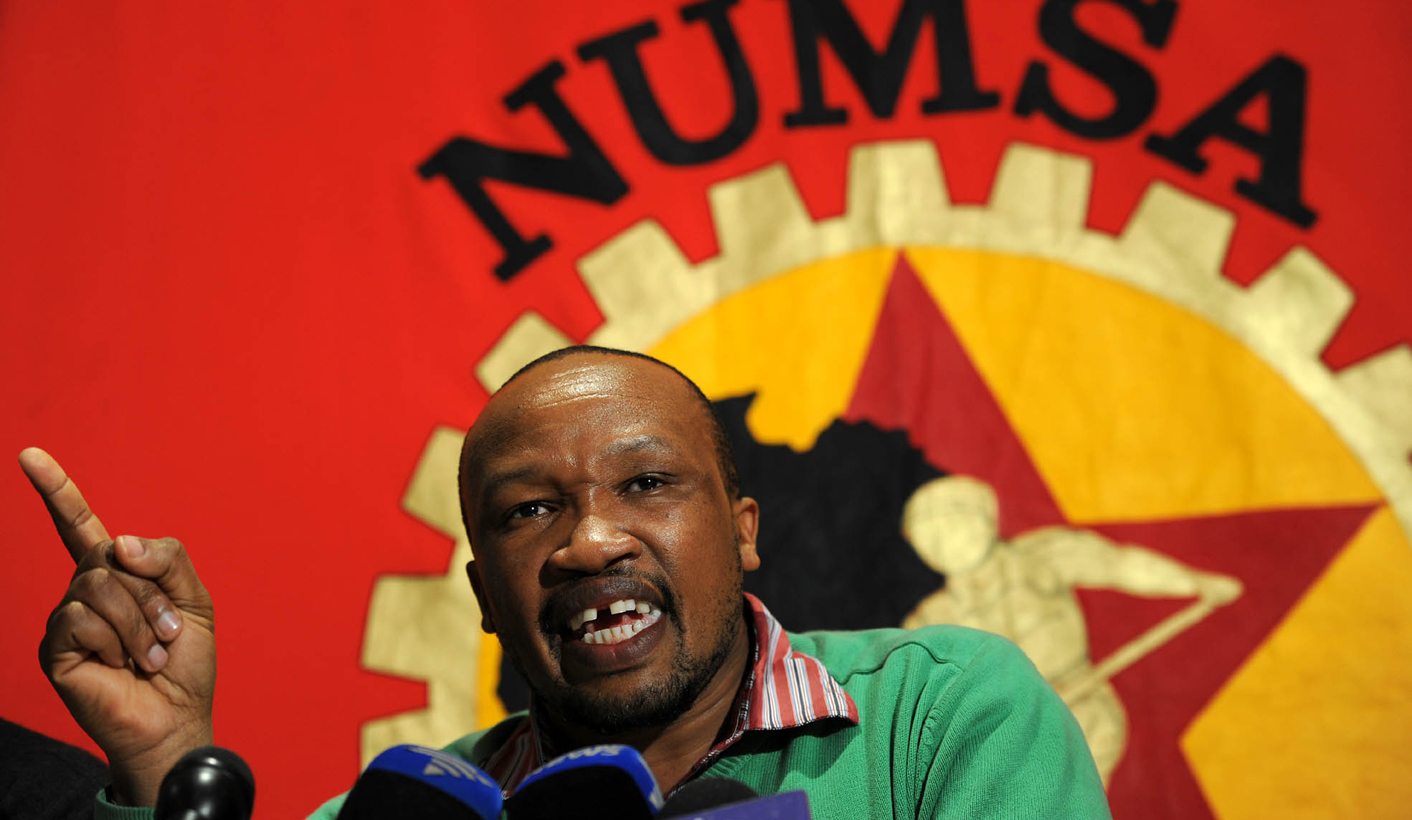 After over 200,000 National Metalworkers of SA (Numsa) members downed tools in the metals and engineering sector at the beginning of July, the union has finally made a deal with employer bodies. Now you can expect more talk about how to avoid protracted strikes in the future. By GREG NICOLSON.

“The settlement offer has been overwhelmingly and unanimously accepted by our members,” said Numsa General Secretary Irvin Jim on Monday, marking the end of another strike in 2014. He was speaking at the union’s Johannesburg headquarters and wearing a slouched, wide-brim hat. Jim said the deal is a “massive victory” for workers.

The three-year agreement, to be signed on Tuesday, includes an annual 10% increase for the lowest paid workers. Higher-paid workers will get increases of 8%. The majority of Numsa’s members are in the lower grades. Employers agreed to discourage and minimise the use of labour brokers and give shop stewards sufficient time off to attend to union and industry matters and pay workers short time through a specific fund.

“We reflected on the strike the whole day yesterday, the impact on the economy, the impact on our members… and we had a resounding mandate that we should settle,” said Jim.

Numsa met with employers on Friday before the union’s national executive committee (NEC) convened on Sunday to discuss the latest offer. Members were summoned to picketing lines on Monday to make a decision on the deal discussed last week.

Before the strike, Numsa wanted a 15% increase along with a R1,000 housing allowance, and also put other non-wage related demands on the table such as the banning of labour brokers. Employer body the Steel and Engineering Federation of South Africa (Seifsa) was offering 7-8%. During the strike, the union dropped its demand to 10% and said it wanted double-digits each year of the deal. Members Daily Maverick spoke to at the launch of the strike said they wouldn’t settle for anything less than 10%.

Last week, the main employer body Seifsa announced its acceptance of a deal brokered by Labour Minister Mildred Oliphant for 10% for the lowest paid categories of workers. However, Seifsa said the deal would only be on the table until 25 July and had to be accompanied by an agreement not to negotiate matters that would impact on the cost of employment at company level. Seifsa CEO Kaizer Nyatsumba said the employer body wouldn’t budge on the issue, which would prevent a sort of double negotiation process, one at collective bargaining level and one at individual companies.

On Monday evening, Nyatsumba welcomed the deal and thanked Oliphant. “We are immensely relieved that the strike is finally over. It is now incumbent on all stakeholders in the metals and engineering sector to work cooperatively together to grow the sector and to ensure that it is internationally competitive. The sector has a very important role to play in the delivery of the government’s ambitious infrastructure development programme over the next few years, and that can happen only when a strong partnership exists between business and labour,” said Nyatsumba. If it weren’t for the minister’s intervention, he said the strike may have lasted longer.

Numsa was able to reach a compromise on the employers’ concerns of “double dipping” negotiations. It said the deal included a successful negotiation of Section 37 of the main agreement, which covers collective and company bargaining, and the union is confident the agreed amendment is legal and won’t disadvantage workers.

Numsa reflected on the matter, which was a sticking point for companies, and said the compromise allowed the union to raise issues that aren’t covered by the main agreement and strike. In companies where Numsa has a bargaining agreement, the union will still be able to raise issues of concern related to matters not covered in the agreement, the union said. Employers wanted a blanket change to avoid the union raising issues during the duration of the three-year wage deal.

“Collective bargaining is facing serious challenges today,” said Jim, noting the socio-economic conditions facing workers and what he said was a lack of government support for small and medium-sized enterprises.

Looking at systems proposed to govern strike action, Jim slammed suggestions that member ballots need to be introduced to start and end strikes. “They must be busy creating jobs… they must create a national minimum wage,” he said on any government intervention to push ballots. He slammed Deputy President Cyril Ramaphosa, who mentioned the ballot issue recently. Introducing strike ballots was a proposal included in the Labour Relations Amendment Bill, but withdrawn after Cosatu protested the issue.

The Democratic Alliance was quick to welcome an end to the strike and said we must now look at the labour relations system. The party’s Ian Ollis said it was time to look at a proposed bill, which would allow violent strikes to be declared unprotected.

While some people looked at the strike in relation to Numsa’s decision not to support the ANC and focus instead on establishing a United Front to push socialism, the union positioned the strike as a fight against Apartheid wage systems and Jim said the deal would help workers face their everyday struggles. He said the offer was a result of “sweat and bitter struggles by our toiling workers” in the effort to confront the colonial-Apartheid wage dispensation.

“The strike was not flexing our muscles. It was a strike to improve the wages and conditions of workers and we’ve just done that,” said Jim.

The strike has had a severe impact on manufacturing output and is likely to lead to continuing poor growth figures in the economy. Carmakers Ford, Toyota, Nissan, BMW and General Motors were all affected as suppliers to the auto manufacturers reduced or stopped output. The building industry also was reported to have seen a slow-down as key materials weren’t available.

According to Nyatsumba, the strike cost the metals and engineering industry R300 million a day, meaning it could have cost the economy billions. Numsa’s strike followed almost directly from the five-month industrial action in the platinum belt, which knocked the country’s economy.

The strike was marred by reports of violence, with many people being arrested on picketing lines for vandalising businesses and intimidating non-striking workers. Numsa claimed that opportunists were using the strike to commit criminal activity under the guise of being members.

While most parties are happy to see the end of the strike, the National Employers’ Association of SA (Neasa), which is smaller than Seifsa, has continually said its members, mainly small and medium-sized businesses, couldn’t afford more than 8% increases. The association wanted a deal tied to a reduction in minimum wage in the industry and said the latest proposals would accelerate job losses.

Numsa was quick to point out on Monday that once the agreement is gazetted by the labour minister, it will apply to all employers. Companies can apply for exemption to the agreement, but must then open their books and show how it will impact their sustainability and survival.

With another costly strike out of the way, it’s time to get back to work. That is, of course, until it starts all over again – as it always does. DM