‘Winnie Mandela Province’ and an independent Afrikaner state: The politics of exclusion in the ‘new’ South Africa 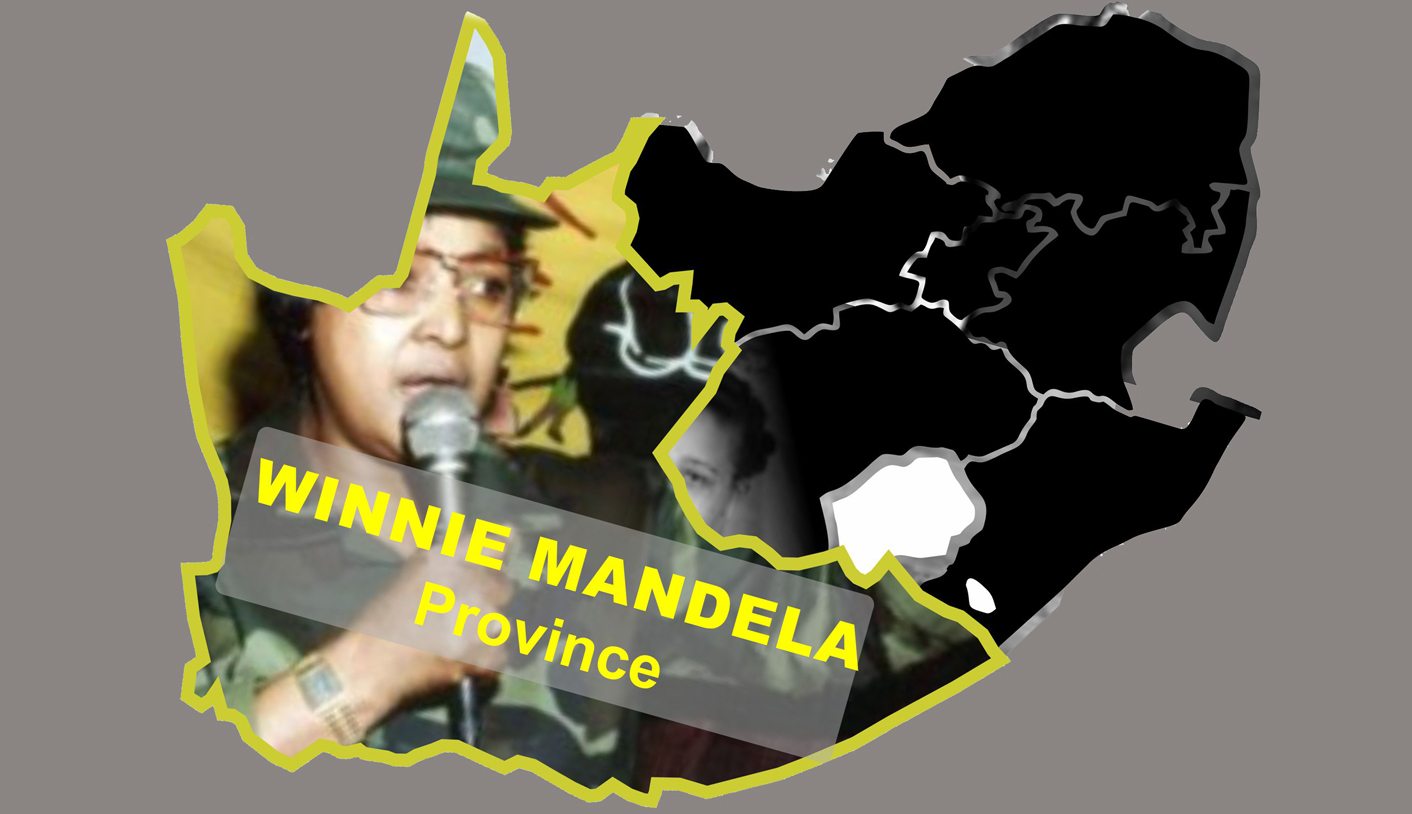 This week, an Afrikaner lobby group announced that they had received a commitment from government to enter into talks about the possibility of an Afrikaner state. In Cape Town, meanwhile, a human rights organization has launched a campaign to merge the Western Cape, Eastern Cape and Northern Cape into one mass they want to call “Winnie Mandela Province”. While neither initiative may have a great chance of success, both cases reflect a distinct sense of exclusion from the political mainstream in different ways. By REBECCA DAVIS.

Andries Breytenbach, the chairman of the Boer-Afrikaner Volksraad (BAV), says it’s quite simple.

And Afrikaners want to be governed by Afrikaners.

It is for this reason that the BAV is lobbying government for the right to establish an autonomous Afrikaner state.

“It’s not a new thing for us,” Breytenbach points out. “The Voortrekkers left the Cape in 1834 to establish their own republics, and became full players in the international world.” It’s not that they specifically object to being governed by a black government, he says. 200 years of white British rule left them just as resentful.

Mandela met with Afrikaners on this issue. Mbeki met with Afrikaners on this issue. An Afrikaner volkstaat remains a pipe dream, though a 2010 Beeld survey found that 56% of respondents would move to a volkstaat if it were created. In 2011, President Jacob Zuma quashed the notion in a Beeld interview, saying: “You can’t create an Orania, you must be part of South Africa and share in what we all share.”

In the same interview, Zuma acknowledged an understanding on the part of Afrikaners for a place where they felt most at home. For him, he said, Nkandla was such a place.

“This is what some Afrikaners need on a psychological level,” Zuma said. “An Nkandla.”

For the likes of Andries Breytenbach, a psychological homeland won’t cut it. He admits that initially they may have to start with something more modest, “a territory with limited autonomy”. But the end goal is an independent Afrikaner state.

Breytenbach says they’re still considering different options for the location of such a state. “It may not be in just one area, but two or three. Because the Afrikaner is spread all over. One might be around Pretoria, another in the Northern Cape.”

Farmable land would be a must, but he stresses that the state would also require normal infrastructure. They will “canvas for investment” to ensure vibrant industry. The state would maintain friendly diplomatic ties to South Africa. “The same as Namibia currently has, or Swaziland, or Lesotho,” Breytenbach suggests.

The BAV approached the Gauteng High Court to try to compel the government to enter into negotiations on the matter of “territorial self-determination for the Boer-Afrikaner people”, but the legal route proved unnecessary. The presidency has confirmed that arrangements are being made for a meeting with the BAV, possibly to take place next month.

Breytenbach thinks that the reason the BAV has a better chance of success than previous Afrikaners campaigning on this matter is its trump card: it is an elected body. In September 2011, the BAV held an election “among the Afrikaner people” – 36,000, he says, voting at 140 points throughout the country – and a “Boer Assembly” of 9 people was elected. (None are women.)

Breytenbach talks about Afrikaners as if both their culture and language is endangered. “It’s impossible for us as a nation to continue to exist where we are outnumbered,” he says. “We are 6% of the total population.”

When he says ‘Afrikaners’, of course, he doesn’t mean “people who speak Afrikaans”, since the latest census results show that the majority of Afrikaans-speakers in South Africa are now black or coloured. Would Afrikaans speakers who are not white be welcome in his state?

“The Afrikaner is a white nation,” he begins. “Whoever governs the state at that time will make laws which can determine who will be there.”

He stresses that Afrikaner identity is not just about language. “Language is but one factor. We know what an Afrikaner is. We are the descendants of Western Europeans who came here. We share a history, heritage, our vision of ourselves. There are Afrikaans-speakers who do not define themselves as Afrikaners.”

It seems strange, given his beliefs, that Breytenbach does not live in Orania, the whites-only Afrikaner enclave in the Northern Cape. Or not so strange: “I live in Kleinfontein,” he says. Ah: the Orania of Pretoria, against the existence of which the DA Youth protested last year.

Many scholars are in consensus that the right to self-determination by ethnic groups should only apply when they are the victims of grave human rights abuses by the ruling government. Afrikaner figures, like singer Steve Hofmeyr, have argued vocally over the past few years that Afrikaners are, indeed, subject to such violations. But it doesn’t seem a card that Breytenbach is particularly interested in playing.

“Human rights abuses do occur against us but that’s not the reason,” he says. “The South African Constitution does not reflect our deepest spiritual values, our culture, our norms. We want a Christian Constitution.”

Someone who isn’t remotely persuaded by Breytenbach’s arguments is Lotta Mayana, the chairperson of a Cape Town-based human rights organization called Sobahlangula. “People calling for [an independent Afrikaner state] don’t want to reconcile with the rest of us,” Mayana says. “They should be able to integrate.”

But Mayana is plotting a re-drawing of South Africa’s internal boundaries of his own, albeit in a very different way. Sobahlangula this week launched a campaign for the amalgamation of the Western Cape, Eastern Cape and Northern Cape into a single province, to be known as ‘Winnie Mandela Province’.

Like the BAV, they have history on their side – in the sense that what was formerly the Cape Province was divided into the three provinces in 1994, with bits also absorbed into the North West province. If their campaign for re-amalgamation were to succeed, the new province would be by far the biggest in the country.

The idea for the campaign came out of the commission of inquiry into the Lwandle evictions, where Mayana gave a brief oral submission calling for the rights of Lwandle residents to be restored.

“What became clear is that the City is not giving services to people they deem not to belong in this province,” Mayana told the Daily Maverick. “That’s why they’ve labelled them as ‘refugees’.” (He was referring to Western Cape Premier Helen Zille’s 2012 description of Eastern Cape pupils who flocked to the Western Cape for better education as “refugees”.)

“In order for us to not make this province exclusive, to share skills and budget, we need to merge provinces,” Mayana said. “But instead of the Cape Province, we make it Winnie Mandela Province.”

Sobahlangula wants Winnie Mandela’s name on the province partly because “it’s time that we honour women” and partly because “she is someone who understands. Someone who knows where we come from, what agendas we need to achieve, that we are looking for economic freedom.”

Mayana’s vision of how the merge of the provinces would lead to greater employment prospects and industry is a little hazy, to say the least. He says what was formerly the Northern Cape can focus on solar energy, whereas the Western Cape will install wind turbines. The land of the former Eastern Cape will be used for agricultural purposes, while all livestock operations will move to the former Northern Cape. Minerals produced within the Northern Cape won’t have to be moved elsewhere for beneficiation.

Oh – and elephants will be farmed in Northern Cape so that their bits can be sold off to China. “There’s big demand,” Mayana says.

Mayana is earnest and likeable in conversation. As I discover later, Sobahlangula’s press statement on the matter is less likeable, railing against “the Jews who are in control of this province”. It’s unclear how seriously he expects the proposal to be actually taken, though he says the organization is circulating a petition in the Western Cape which is being enthusiastically signed.

If it’s a gimmick, though, it’s a gimmick designed to highlight one serious point: the sense of exclusion which Sobahlangula says is felt by the Western Cape’s poorest residents. To them, the organization says, Cape Town is a city where elites “live lavish Hollywood lifestyles at the expense of the poor”.

Black people in the Western Cape, they say, “are segregated from the non-black population: there are separate schools, shopping malls and hospitals for blacks and white people and the services available are based on the colour of your skin”.

In a sense what Sobahlangula is asking is the opposite to the BAV: an end to this kind of segregation, as opposed to its formalization. The BAV wants to be left alone; Sobahlangula wants to move from the margins to the centre. But what both these very different groups are voicing is a profound sense of alienation. Neither feel their needs are being met in the current political and geographical status quo. Government may well chuck both proposals in the rubbish bin, but those feelings aren’t likely to just disappear. DM