Honda Accord: Can bigger be better? 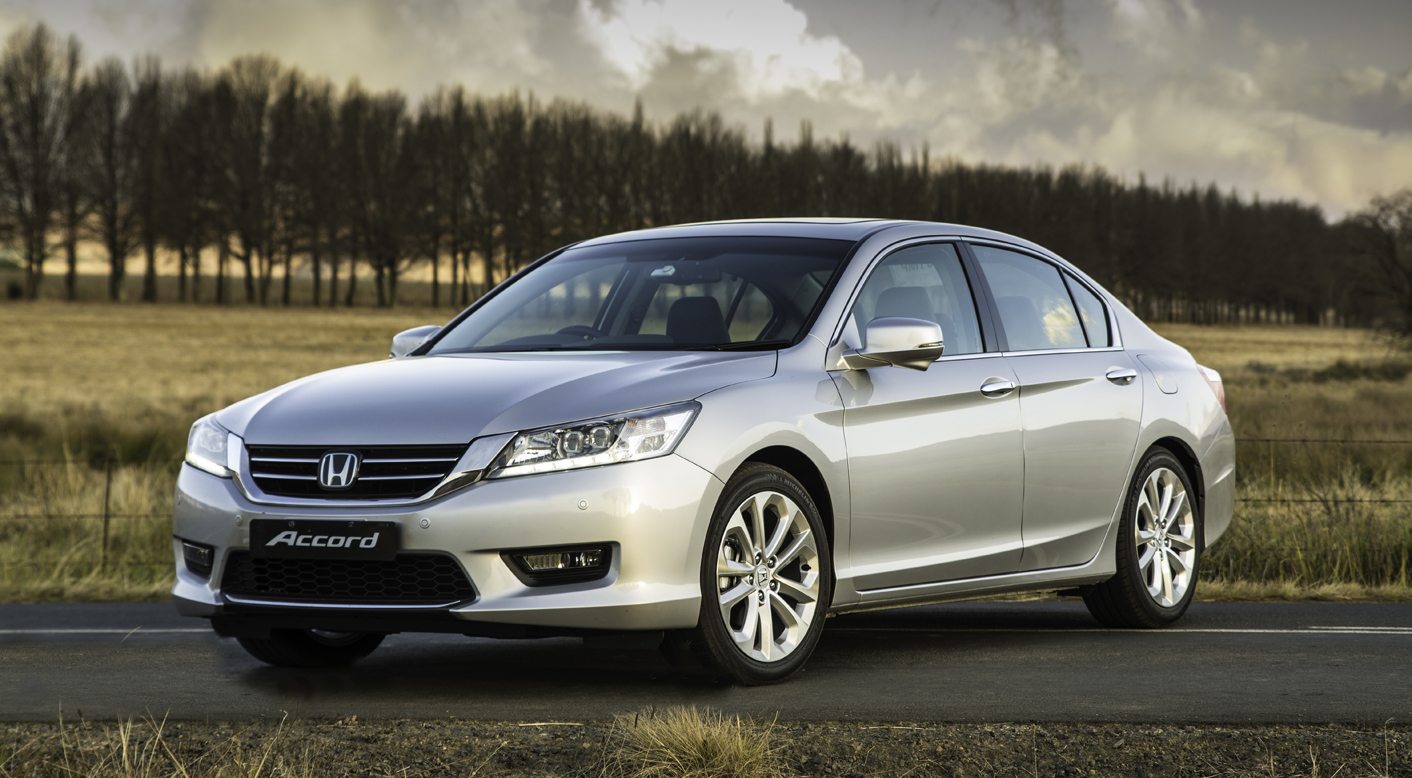 The Honda brand enjoys an elevated status among the motoring public, thanks mainly to a formula of fine engineering and enduring quality, garnished with innovation, individuality, and value. But in South Africa, the Honda Accord has never been a big seller. Can this latest, larger version do any better? DEON SCHOEMAN gets behind the wheel to find out.

Medium-sized sedans such as the Honda Accord, the Mazda6 and VW’s Passat have been fighting an uphill sales battle for a long time.

The problem is that car buyers in this price bracket tend to opt for smaller sedans from premium brands like Audi, BMW, Mercedes-Benz and Lexus. And if they do need more space than those cars, they choose an SUV instead.

It wasn’t always that way, or course. Until the early 1990s, South Africans loved their big family cars. Those were the days of the Toyota Cressida and its replacement, the Camry, as well as the Mazda 626 and Ford’s Mondeo, to name a few.

The advent of the compact premium sedan in the form of the first-generation BMW 3-Series would change everything. Suddenly, a luxury brand was within reach, even if it was smaller, and the allure of an aspirational product simply became too strong.

Besides, those big sedans weren’t getting cheaper to buy, nor cheaper to run. And those on tighter budgets opted for the affordability and practicality of smaller, more efficient front-wheel drive sedans and hatchbacks instead. The glory days of the medium sedan were over.

Why then has Honda South Africa just launched an all-new Accord?

The company reckons that the Accord no longer competes against the German luxury brands. Instead, Accord buyers acquire the sleek, smart sedan because they’re specifically attracted to the Honda brand, and the engineering and quality values it epitomises.

Accord sales volumes may be relatively small in South Africa, but in global terms, it is Honda’s best-selling passenger car. It’s also one of America’s most popular cars, and the most popular nameplate among private buyers. The question is whether the all-new version can boost the Accord’s popularity in the local market.

The first thing you notice about the latest Accord is how big it is, compared to the previous model. But big doesn’t equate to cumbersome in this instance: it’s nicely proportioned, with an aerodynamic shape that manages airflow over, around and underneath the car in the interests of a low drag coefficient. It’s also unmistakably a Honda.

Previous-generation Accords sold in South Africa were European models, which meant they were slightly more compact than the US version, with a chassis tuned for sharper, tauter responses. However, the so-called Euro-Accord is no longer produced, which means that this latest version is actually the larger, US-market Accord.

The result is a car that is significantly longer but only slightly wider than its predecessor. The extra length means that the Accord’s cabin gains more interior space, which Honda here believes is more important to local Accord buyers than a sporty chassis or pin-sharp dynamics.

One thing that hasn’t changed is the Accord’s tactile quality. The paint finish is excellent, doors close with a solid thunk, and shutline tolerances are impressively close.

While the Accord’s larger dimensions may have robbed it of some of its visual sportiness, the interior certainly benefits. Rear occupants are the primary beneficiaries of the extended wheelbase, with plenty legroom and shoulder room. At just short of 500 litres, the boot is generous, too.

But the cabin’s appeal doesn’t rely on the extra space alone. Up front, the treatment is clean and contemporary, with a strong sense of functionality and ease of use. The primary instruments remain analogue, but they’re partnered by not one, but two digital displays, both centrally located.

These can be configured to show average or instant fuel consumption, the audio system status, or to gain access to the various system set-up menus. It’s all very slick and intuitive.

The model under scrutiny here is the entry-level two-litre Elegance, but there’s nothing junior about its list of standard features. Included are the likes of electric windows, mirrors and seats, a multifunction steering wheel, climate control, front and rear parking sensors with rear-view parking camera, Bluetooth connectivity and more.

The seats are upholstered in leather, while the dashboard gets glossy, carbon fibre-patterned finishes and accents – creating an effect that’s sophisticated without resorting to blingy effect. That said, the wood finishes in the flagship V6 model are just too traditional, too stodgy, for a car as modern as this latest Accord …

As mentioned, the example on test here is the most affordable member of the Accord clan, which makes the comprehensive standard equipment list all the more impressive. But considering the new Accord’s more generous dimensions, that two-litre engine seems just a little humble.

As it happens, the drivetrain comes as a pleasant surprise. The 16-valve, four-cylinder unit is well up to the task of propelling the Accord to decent speeds, and endowing it with nippy, if not exactly athletic, reactions.

Part of the reason is the sedan’s fairly trim 1,481kg kerb mass, which means it’s able to make the most of the engine’s 114kW output maximum. The torque peak is a useful 190Nm, which suggests decent midrange shove.

I somehow expected this most junior version of the Accord to feature a manual gearbox, but as it turns out, it’s fitted with a five-speed automatic transmission – which, I suppose, fits in with the positioning of the car as an effortless, comfortable and safe sedan.

However, it’s the gearbox that’s the only real disappointment here. It’s not that the ratio selection is poor – quite the opposite. However, a six-speed transmission would have made more of the urge on offer, and probably allowed for smoother transitions.

Perhaps more pertinently, there’s no sequential manual override on offer – and there are no shift paddles. Proper manual override allows the driver to determine the best gear for any given situation. Shift paddles make that process swifter, and more intuitive.

Both would have benefited the interface between the driver and the Accord 2.0 – and more so because of the Honda’s throttle response.

The Accord employs a so-called drive-by-wire throttle, which in this application responds too sharply, too eagerly, to accelerator pedal input. Perhaps Honda’s engineers were intent on ensuring that the Accord should feel responsive, but the result is a gearbox that gears down at the slightest prompt, chasing up the engine revs unnecessarily, and delaying upshifts too long.

It not only compromises the Accord’s hard-fought refinement, but gets in the way of enjoying the car’s obvious dynamic potential.

Not that this two-litre Accord is a rocket ship – but it’s not a sloth, either. If anything, the sedan feels quicker than the claimed 11.8 seconds for the zero to 100 km/h dash suggests. Top speed is 200km/h, which remains a largely academic figure, given the state of our roads and the questionable standards of driving.

Unexpectedly, the Accord’s chassis offers a ride that is confident, despite is softer set-up. The latter allows the car to soak some of the inevitable bumps, ruts and dips that have become an accepted feature of our local roads, but without robbing the Accord of its composure.

Sure, the steering could be more responsive, but it’s pretty good for an electrically assisted design in a big car. And yes, there is some lean and yaw when cornering with vigour, but never to the extent that it scares or unsettles the Accord’s occupants. In fact, it’s fun to drive this Honda with some intent – which has always been a Honda hallmark, even in this case.

For the thrift-minded, fuel consumption for the combined cycle is a claimed 7.5 litres/100 km, dropping to 5.78 litres in open road conditions. The test average ended up in the mid-7 litres/100 km, which is pretty good, given that we didn’t spare the horses.

By opting for the larger, somewhat softer and certainly more refined Accord, Honda is attempting to carve a very specifically defined niche for the big sedan. The two-litre version may be the most affordable version, but with all that space and plenty of standard kit, it’s also arguably the best, given its sub-R400 sticker price.

However, at well over R500,000, the 3.5-litre V6 flagship is right in Mercedes-Benz and BMW territory, and may find the going somewhat tougher. DM