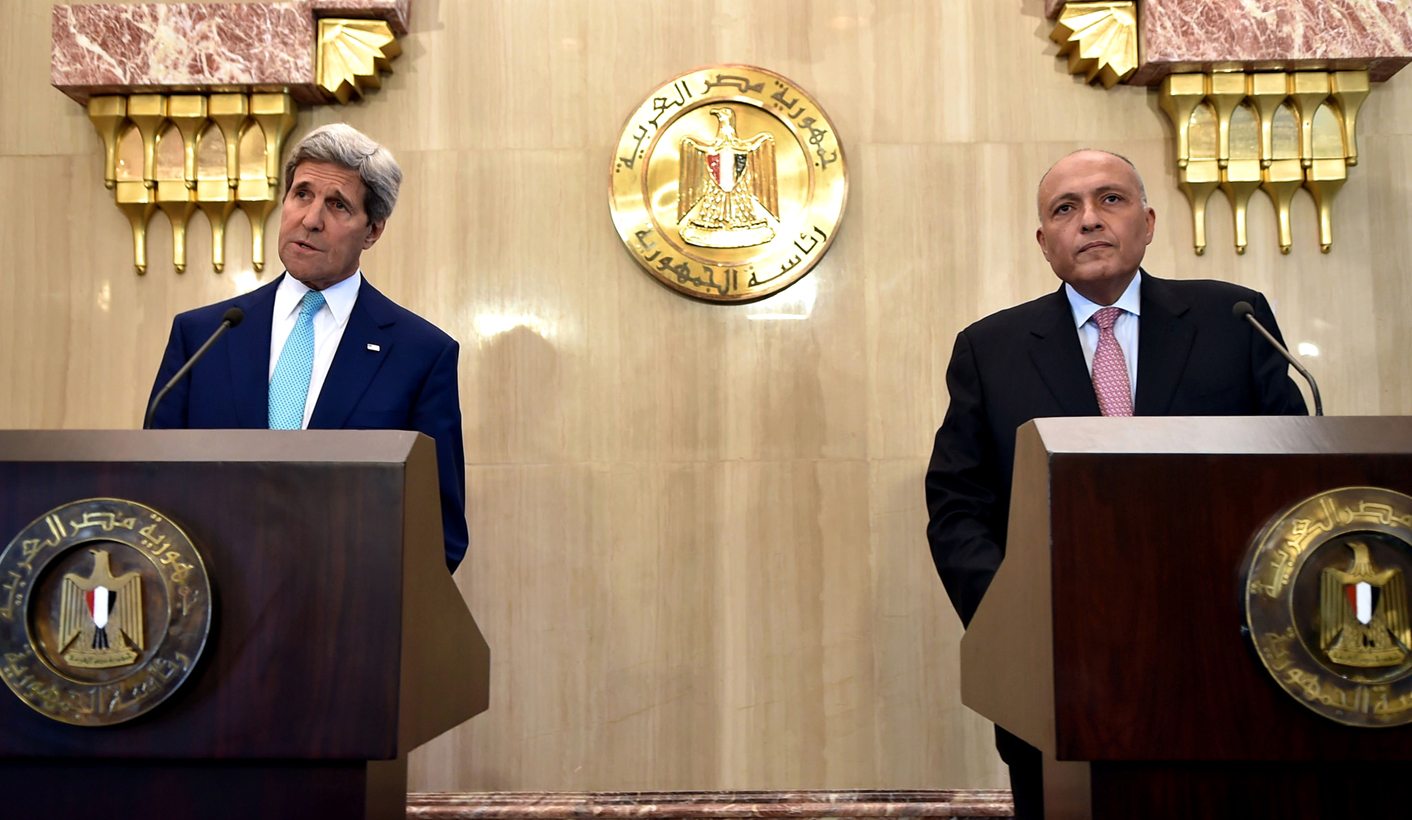 U.S. Secretary of State John Kerry urged Hamas on Tuesday to pursue a negotiated end to its conflict with Israel after what he said were constructive talks with Egyptian officials about their ceasefire proposal. By Arshad Mohammed and Yasmine Saleh for Reuters.

After meeting Egyptian President Abdel Fattah al-Sisi, whose country has some leverage overHamas through its control of a border crossing from Egypt to the Gaza Strip, Kerry said there was still “work to do” to resolve the conflict.

Israel pounded targets in the Gaza Strip on Tuesday and Justice Minister Tzipi Livni, seen as the most dovish member of Prime Minister Benjamin Netanyahu‘s inner security cabinet, told Israeli Army Radio: “A ceasefire is not near.”

More than 600 people have died since Israel launched an offensive on July 8 to halt missile attacks out of the Gaza Strip by Hamas, which has been angered by a crackdown on its supporters in the occupied West Bank and by its suffering economic hardship because of an Israeli-Egyptian blockade.

“Hamas has a fundamental choice to make and it is a choice that will have a profound impact for the people of Gaza,” Kerry told reporters in a joint appearance with his Egyptian counterpart,Sameh Shukri.

“The Egyptians have provided a framework and a forum for them to be able to come to the table to have a serious discussion together with other factions of the Palestinians,” Kerry added, calling the U.S.-Egyptian talks “constructive meetings”.

Hamas has already rejected the Egyptian initiative, saying the plan ignores its demands for the release of prisoners and for a more comprehensive lifting of an economic blockade on the Gaza Strip.

The Egyptian plan does not specify a timeline for easing the blockade, saying “crossings shall be opened and the passage of persons and goods through border crossings shall be facilitated once the security situation becomes stable on the ground.”

In a sign of the intensity of the U.S. diplomacy, Kerry spoke to Netanyahu and to the foreign ministers of Turkey and Qatar after his two-hour meeting with Sisi, according to a senior U.S. official.

Because the United States views Hamas as a terrorist group, they have no direct contact and Washington must rely on proxies such as Egypt, Qatar and Turkey.

U.S. officials view Qatar, a tiny, gas-rich Gulf state that has supported Hamas financially and hosts some of the militant group’s senior leaders, as important to the diplomacy because of its ties to the Palestinian group.

In contrast, the current Egyptian government is deeply suspicious of Hamas because it is an offshoot of the Muslim Brotherhood, the Islamist movement toppled from power in Cairo by then-army chief Sisi last year.

The upcoming Eid al-Fitr festival, Islam’s biggest annual celebration that follows the end of the fasting month of Ramadan this weekend, could provide all sides with a convenient moment to agree to a ceasefire.

Asked about the Eid holiday, a senior Obama administration official said: “It’s a potential opportunity. We want there to be a ceasefire as soon as possible basically, and insofar as that’s a marker that can compel Hamas to the table that would be a good thing, but the bottom line is they’re going to have to stop firing rockets.”

A second senior U.S. official, who spoke on condition of anonymity, said there were several ideas under discussion “on how we can move as quickly as possible to a ceasefire” but gave no details.

“Right now our focus is on stopping the rocket fire so that we can begin a serious negotiation on the key issues. There are a range of options under consideration for a ceasefire. We did not expect to resolve that question today,” the official said.

Kerry also said if any ceasefire took hold, the parties would then have to grapple with the conflict’s underlying issues.

“Just reaching a ceasefire, clearly, is not enough,” he said. “It is imperative that there be a serious engagement, discussion, negotiation, regarding the underlying issues and addressing all of the concerns that have brought us to where we are today.” DM

Photo: A US State Department handout shows US Secretary of State John Kerry (L) and Egyptian Foreign Minister Sameh Shoukry (R) addressing a joint press conference following a meeting with Egyptian President Abdel Fattah al-Sissi (not pictured) in Cairo, Egypt, 22 July 2014. Kerry and UN Secretary General Ban Ki-moon are in Cairo to support Egyptian efforts to broker a ceasefire in the escalating Israel-Gaza conflict. The US is sending 47 million dollars in aid to Gaza ‘to alleviate some of the immediate humanitarian crisis,’ Kerry said 22 July. EPA/US STATE DEPARTMENT HANDOUT