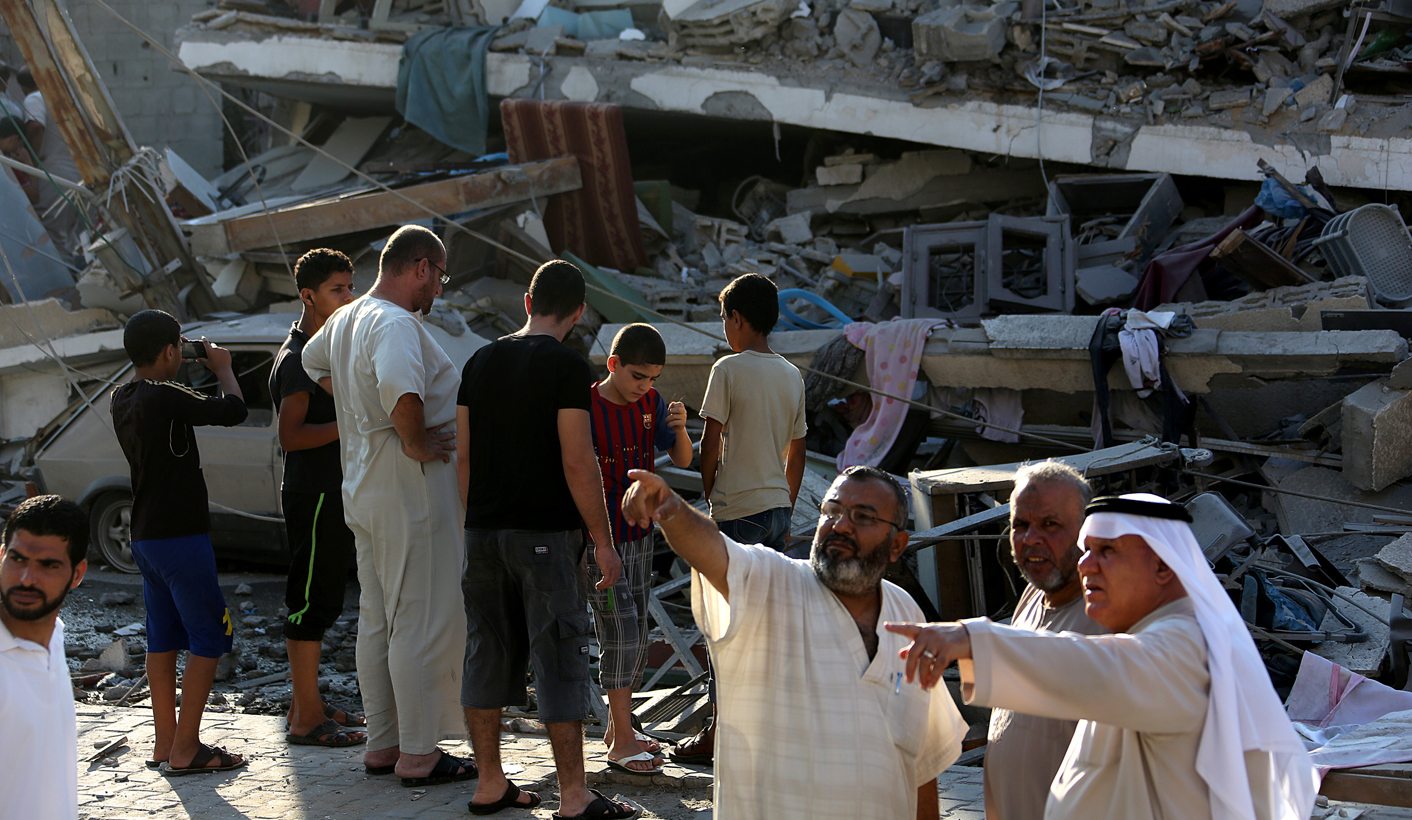 An entire population is trapped in what is essentially an open-air prison. They can’t leave and only the most limited supplies – essential for basic survival – are allowed to enter. The population of the prison have elected representatives and organised social services. Some of the prisoners have organised into armed groups and resist their indefinite detention by firing rockets over the prison wall. However, the prison guards are the ones who have the capacity to launch large scale and highly destructive attacks on the open-air prison. By JONATHAN WHITTALL.

Gaza is one of the most densely populated parts of the world, with 1.8 million people living under siege in the strip.

Humanitarian assistance is still allowed to enter Gaza and there is the possibility for an independent organisation like Doctors Without Borders (MSF) to provide emergency care to the population. But the doors to the prison remain firmly locked. People are not able to flee, to seek safety away from the immediate danger of a large scale offensive.

Everyone pays the price for living under siege and for their acts of resistance. Medical workers have been killed and health structures damaged. In such a densely populated environment, the claims of not targeting civilians in air raids is of little comfort.

There are always limits to humanitarian action. Humanitarian organisations like MSF can treat the wounded, but we can’t open borders or end violence.

These limits are not unique to Gaza. In 2012, MSF closed its projects in the prisons of Misrata, Libya. Our doctors were outraged to be in a position where we were providing treatment to patients that were being tortured by state authorities.

At the time, MSF spoke out strongly: “Our role is to provide medical care to war casualties and sick detainees, not to repeatedly treat the same patients between torture sessions.”

As the violence once again erupts in Gaza, with Israel pounding the strip from the air – and Hamas fires rockets into Israel – MSF is mobilising to again respond to the medical needs that are caused by air strikes on a trapped population. MSF has a surgical team on standby if the capacity of the Gaza health facilities is overwhelmed.

This is not the first time that MSF has scaled up its response to an escalation in violence. Since 2010, MSF has run a post-operation clinic in Gaza city where 80 percent of the patients suffer from severe burns; performs specialised hand-surgery in Nasser hospital, Khan Younis; and provides intensive care training to medical and paramedical personnel of Nasser and Ah-Shifa hospitals.

MSF provided emergency care to the people of Gaza during the ‘Cast Lead’ military operation in 2009 and ‘Pillar of Defence’ in 2012.

However, in previous operations, and at the time of writing, the impact that MSF was able to have has been limited. Part of the reason for this is that Gaza has a well-functioning medical system, even though it is under strain from the siege and could be quickly overwhelmed.

In addition to the limited impact, the voice of outrage of MSF medical teams is drowned out by the propaganda war that erupts each time an operation such as this takes place and by the concerns that too loud a voice of criticism could cut off the organisation’s surgical teams from being able to reach the Gaza strip.

Humanitarian aid and its workers should be given unhindered access at all times – not as a favour but as a legal responsibility. The blockade must be lifted.

Once the bombs fall silent and the people of Gaza pick up the pieces after this assault on their life and dignity, MSF should ask itself whether it can keep working in such an environment. At what point does MSF’s repeated medical action in an unacceptable situation become complicity to aggression and oppression?

Would MSF accept to work in a prison where the guards had thrown away the key and threw explosive devices over the wall into the overcrowded den of human suffering? Should MSF stay and deliver care, while bearing witness  – or walk away in outrage, refusing to be complicit?

Confronting the limits of humanitarianism is a daily reality for MSF field workers. In Gaza, it is made only more apparent by the duration of the suffering and the international political configuration that allows for the sick political stalemates and endless violence to continue.

In the midst of this latest emergency, MSF’s decision is to provide treatment and to try to save lives. During this offensive, Gaza faces a unique set of circumstances, which makes the uncomfortable reality of yet again responding to the needs caused by an Israeli military operation an essential task: the offensive might last longer, with a real possibility of a ground operation, and the Rafah border crossing remains largely closed. These factors will certainly exacerbate the chronic problems facing the Gaza strip in terms of shortages of drugs and fuel.

As the open-air prison of Gaza braces for more airstrikes and ground operations, the limits of humanitarianism will remain all too obvious. People should be allowed to move freely and to seek safety in times of violence, including into Egypt – and the wounded who require more specialised care should be allowed to be referred to the nearest hospitals outside of the Gaza strip when necessary.

Civilians and civilian infrastructure – including medical workers, health centres and ambulances – should never be targeted. Humanitarian aid and its workers should be given unhindered access at all times – not as a favour but as a legal responsibility. The blockade must be lifted.

Yet these most basic provisions continue to go unmet. While the blockade on Gaza remains firmly in place, MSF is continuing to work in an open-air prison to patch up prisoners in between their torture sessions. DM

Jonathan Whittall is the Head of Humanitarian Analysis at Médecins Sans Frontières/Doctors Without Borders (MSF), based in Beirut.

Photo: Palestinians inspect a destroyed house after an Israeli air strike in the Gaza City, 21 July 2014. Tens of thousand of Palestinians living in the area which is in close proximity left their houses in the past days to seek shelter from an Israeli ground invasion. Israel was pressing its ground operation into southern Gaza, after infantry soldiers entered the coastal enclave three days ago in order to end rocket fire and destroy tunnels leading into Israel, the army said. EPA/MOHAMMED SABER