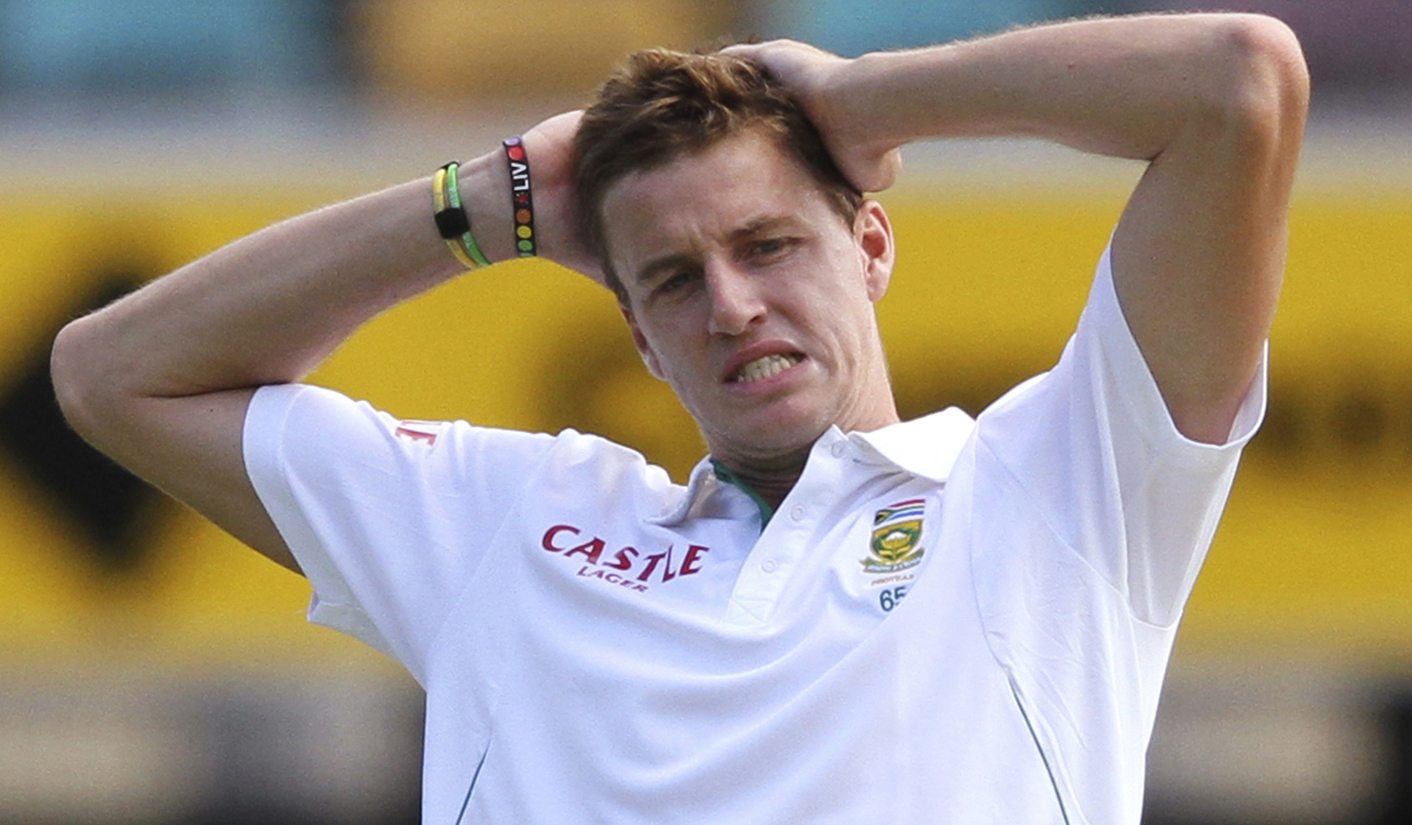 Morne Morkel’s role in the team has always been one of support for his fellow bowlers and he doesn’t often reap the rewards in terms of wickets. That changed in Galle, though, and Morkel showed that sometimes the support act can get the plaudits for hard work. By ANTOINETTE MULLER.

As the celebrations after South Africa’s win in Galle begin to settle down, there will be little time to regroup. The next Test starts on Thursday and the challenge is now to avoid losing and retain the number one ranking they lost to Australia.

There has been much praise for Dean Elgar, JP Duminy, Hashim Amla and Dale Steyn. Morne Morkel’s efforts have been praised, too, as South Africa’s seamers flourished in conditions many expected them to struggle in. Morkel’s seven wickets and his efforts with the older ball were just rewards for a bowler who has been consigned to the supporting role of the team.

Morkel’s place wasn’t exactly under threat, but he has struggled for wickets recently. That was partly to do with Steyn being in the form of his life and partly to do with the kind of role Morkel has been given in the team. Because of the lack of a reliable spinner, Morkel has had to fill the role of containing batsmen, roughing them up and handing over the scalps to his fellow cherry pickers.

In Galle, South Africa still did not have a reliable frontline spinner, but Morkel’s plans and approach was more meticulous than it had been before and he earned his reward with seven wickets in the match – the first time since 2012 that he has managed to take more than four wickets in a match.

It wasn’t exactly a renaissance; it was simply a lesson in what happens when you get the basics right. Morkel really came into his own in the second innings in Galle and for the quick, body language is one of the key parts of the game. It was something that stood out throughout the Test. Whether it was Steyn snarling at players with his bulging veins in his head or Morkel being ferocious with his short balls, South Africa’s attack never relented. Not in their run-ups and not in their energy. The right-armer accepts his role as a support act, but admitted that finally getting some wickets to the bowling figures column was a good feeling.

“I felt I bowled really well for one over in the first innings. To support the bowlers and get a couple of wickets in the wicket column is great,” said Morkel.

He also put in a concentrated effort in to bowl fuller and his short ball battering of the lower order was frightening. He was always pushing batsmen to play, forcing edges and creating pressure. Against Australia, his short ball bowling was equally fierce, but his follow-up delivery, designed to get the batsmen, was often lacking. Against Sri Lanka he looked fiercer, more determined and more thoughtful of how to force mistakes.

Part of the reason the plans worked is because Sri Lanka’s middle order is fragile and vulnerable. The other reason it worked is because Morkel made his plans properly. Having seen against Australia that he is lacking in his length and his follow-up, he is now more street smart. To execute those kinds of skills in conditions which does nothing to aid his bowling craft is incredible.

Skipper Amla deserves praise, too, for using Morkel at right time almost every time. Short, aggressive bursts yielded a wicket in almost every single return spell for the quick. While it was a team effort by the bowlers, it’s a big win for Morkel who, although very tidy, has struggled to find his “mongrel” in Tests. Lack of consistency in terms of extras has also previously been a frustration for the bowler, but there has been a marked improvement in those, too.

Confidence can be a funny thing in sport. Once it’s up and you have earned that self-belief, players often excel beyond the realms of what is expected of them. South Africa’s pace attack have got their tails up after achieving the apparently impossible in Galle.

The venue for the next Test, the Sinhalese Sports Club Ground (SSC) in Colombo, is hardly a friendly playground for fast bowlers. If anything, it’s their graveyard. Chaminda Vaas took 14 wickets in a match there in 2001 and South Africa’s own Brett Schultz snaffled nine back in 1993, but the performances of fast bowlers have been mostly underwhelming, with batsmen queuing up for runs. But South Africa are hardly strangers to adversity. Without Jacques Kallis and Graeme Smith they have already shown that their greatest strength lies in their depth and their ability to rebuild. Legacy has been their buzzword for a long time and, at least for the time being, it seems that legacy is only going to grow.

Just like in Galle, they will have to make do with what they are given: the hot and humid conditions and the pitches which spare no fast bowlers.

“Body language is [the] key for us. If the opposition see that our fast bowlers are fired up it sends a message to them. If the wicket is flat and the ball is soft, we all need to come up with a game plan,” said Morkel.

There is little time to regroup for South Africa. Morkel won’t be spending too much time in the nets. Instead, he’ll put his feet up, do a bit of running, nurse a few blisters and have a light bowl. Then he gets to do it all over again, now with a little bit of extra expectation on what exactly his supporting role entails. DM