Mbeki in the arms deal spotlight 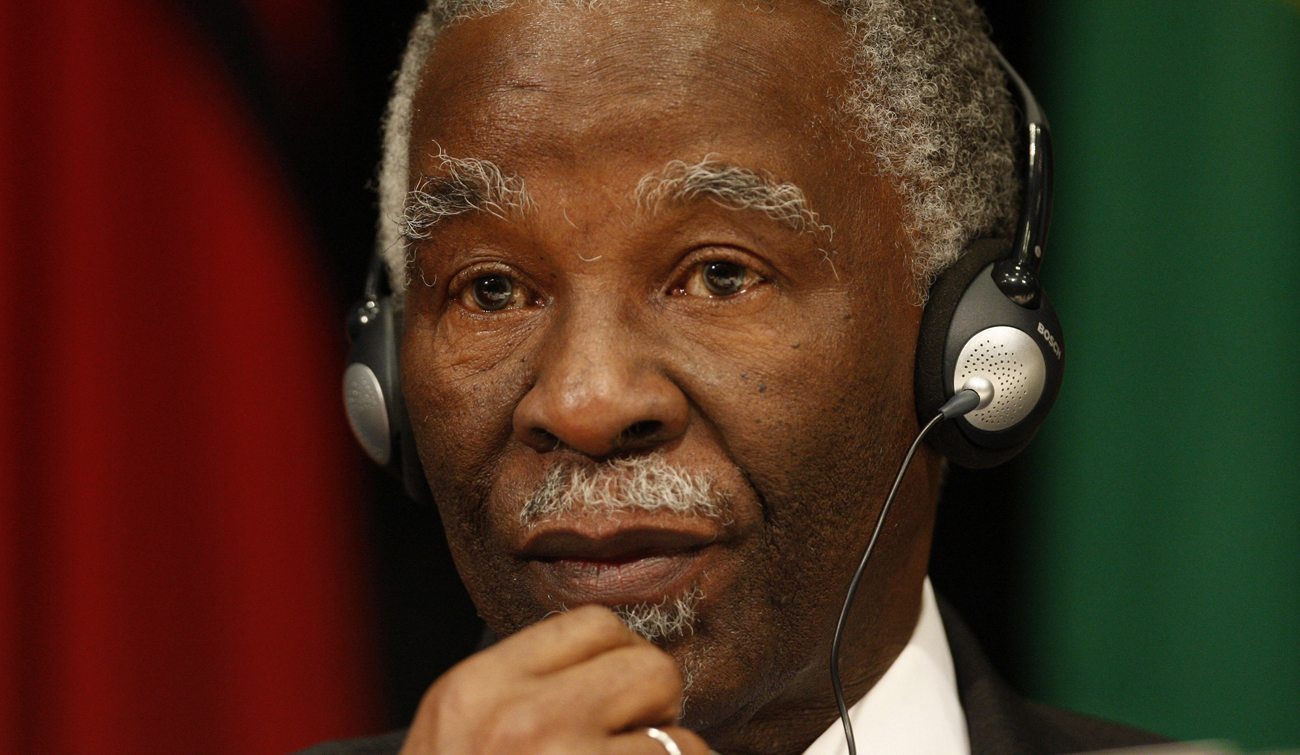 Former President Thabo Mbeki appears at the Arms Deal Commission today to explain his role in the costly scandal. There are questions he has to answer, but GREG NICOLSON worries it’s just another waste of taxpayers’ money. In case we didn’t have enough of that.

Reclaiming dignity. Realising liberation. Uniting Africa. Confronting international subjugation. Mbeki’s 1999 inauguration speech poetically outlined the philosophies underpinning his presidency. “Our nights cannot but be nights of nightmares while millions of our people live in conditions of degrading poverty,” he said. “Sleep cannot come easily when children get permanently disabled, both physically and mentally, because of lack of food. No night can be restful when millions have no jobs, and some are forced to beg, rob and murder to ensure that they and their own do not perish from hunger.”

Since his 2008 recall, Mbeki lives in relative obscurity, sometimes attending to issues of peace and stability on the continent, occasionally emerging to make a local speech, but his legacy has lately been defined by current politics. The DA and EFF say the ANC was all right until President Zuma stepped up. The ANC of today points to improvements made since 2008, such as the strides in dealing with HIV/Aids.

The arms deal is a better starting point to look at the former president’s impact. The R30 billion procurement package seemed like a panacea or at least a partial solution to Mbeki’s key concerns. Well-equipped armed forces could help in peacemaking on the continent, a necessary step in the African renaissance. South Africa’s sovereignty would be better secured and the paternalistic West would see the country as a serious player. Both Apartheid generals and MK leaders would be satisfied – a tidy bit of nation building. To cap it off, the economy would vastly benefit, with promised offsets, investments in the country, of R110 billion from the arms companies and 65,000 jobs. With any luck, that would lead to more investments, higher growth and reduced unemployment.

Addressing the armed forces in September 2008, almost 10 years after the arms deal began, Mbeki was dogged by allegations of corruption. “I want to assure you that the new ships you sail and the aircraft you fly, given to you by our democratic order, were obtained without resort to corrupt means, informed only by the outcome of the widely-consultative Defence Review which decided the needs of our National Defence Force, including the South African Navy.” He continued, “Please rest assured that whatever mischievous story or rumour any among our people and others abroad may choose to propagate, the modern and sophisticated equipment you now control and operate was obtained honestly, based on decisions of our national government.”

These days, the ships aren’t being sailed and the aircraft aren’t being flown. A 2012 Sunday Times report found most of what was purchased in the arms deal is not being used or is severely underused. That’s largely been verified at the Commission. Terry Crawford-Browne, whose dogged efforts to enforce accountability on the issue led to the current inquiry, wrote recently, “As the Auditor General reported to Parliament in September 2000, no consideration was given to the personnel requirements for the arms deal. There are insufficient pilots to fly the aircraft, mechanics to maintain them, or even the money to fuel them.”

According to reports, the state has spent around R50 billion on the arms deal. That’s in the range of 200 times what the state has spent on upgrading Zuma’s Nkandla home. Only a pittance of the promised jobs and R110 billion investment in South Africa ever eventuated from the arms companies (note: never trust arms dealers). The Commission is tasked with looking into why the decision was made to procure the arms, whether the South African government was pressured, why warnings were ignored, whether promises were met and whether corruption took place.

As head of state, Mbeki could be held responsible for the actions of his administration, but his involvement in the saga is, in fact, more direct. He was the champion of the deal. As chair of the committee looking into the procurement of arms, he will face questions on why he and his ministers allegedly ignored the advice of SANDF officials on what they should buy and instead pushed or appeared to favour other arms companies and other options, such as the Gripens from BAE/SAAB. His team reportedly heard in an affordability study that SA couldn’t afford the proposed arm deal and it would have negative economic consequences. The advice was ignored.

Mbeki should also face scrutiny on why he trusted the arms companies to deliver on their promised offsets, the supposed key to the deal. Arms companies often promise to invest in a country to hook the buyer, but it’s known that they don’t always deliver and measuring their work is difficult.

There are also the corruption allegations. Overseas investigations into the deal have suggested an enormous amount of bribery was involved, potentially billions of rand. In 2008 news reports quoting a British Control Risks study alleged Mbeki got R30 million from MAN Ferrostaal in relation to the submarine contracts and gave R2 million to Zuma and the rest to the ANC. The party and Mbeki have dismissed the allegations.

The former president also has a case to answer after the deals were done. Locally, the Standing Committee on Public Accounts, the Auditor General, and an investigative team all looked into the arms deal after allegations already emerged in 1999 that corruption took place. Mbeki is accused of blocking the investigation from uncovering the truth of what happened. When German prosecutors wanted to charge arms deal company ThyssenKrupp after the country’s tax authorities rejected its attempts to claim bribes as a business expense, it’s reported that the South African government refused to cooperate with investigations into their dealings here.

In his biography on Mbeki, Mark Gevisser wrote, “If the arms deal has become the poisoned well of post-Apartheid South African politics, then it was Thabo Mbeki himself who initially contaminated the water – even if this was done with the best of intentions.”

The arms deal was posited as being intimately tied to Mbeki and his goals of African unity, continental assertion, economic development, and challenging international power relations defined by the West. Instead, it set taxpayers back billions and gave the SANDF useless things they don’t use and some useful things they don’t have the resources to use.

Worse – the arms deal was signed in a time when democratic South Africa still seemed on a march to practically realising its freedoms, to putting an end to Mbeki’s nightmares. Instead, another nightmare was created. Money that should have been used for development was diverted to weaponry. Investors who were already skeptical of the country had a perfect example of corruption to cite. And, perhaps worst of all, 15 years later almost no one has been held accountable, leading people to believe that nothing can be done about corruption.

It’s unlikely that the Commission in Pretoria today will let the responsibility fall on Mbeki or even allow the toughest questions. So far, it’s been little more than another waste of taxpayers’ money. DM