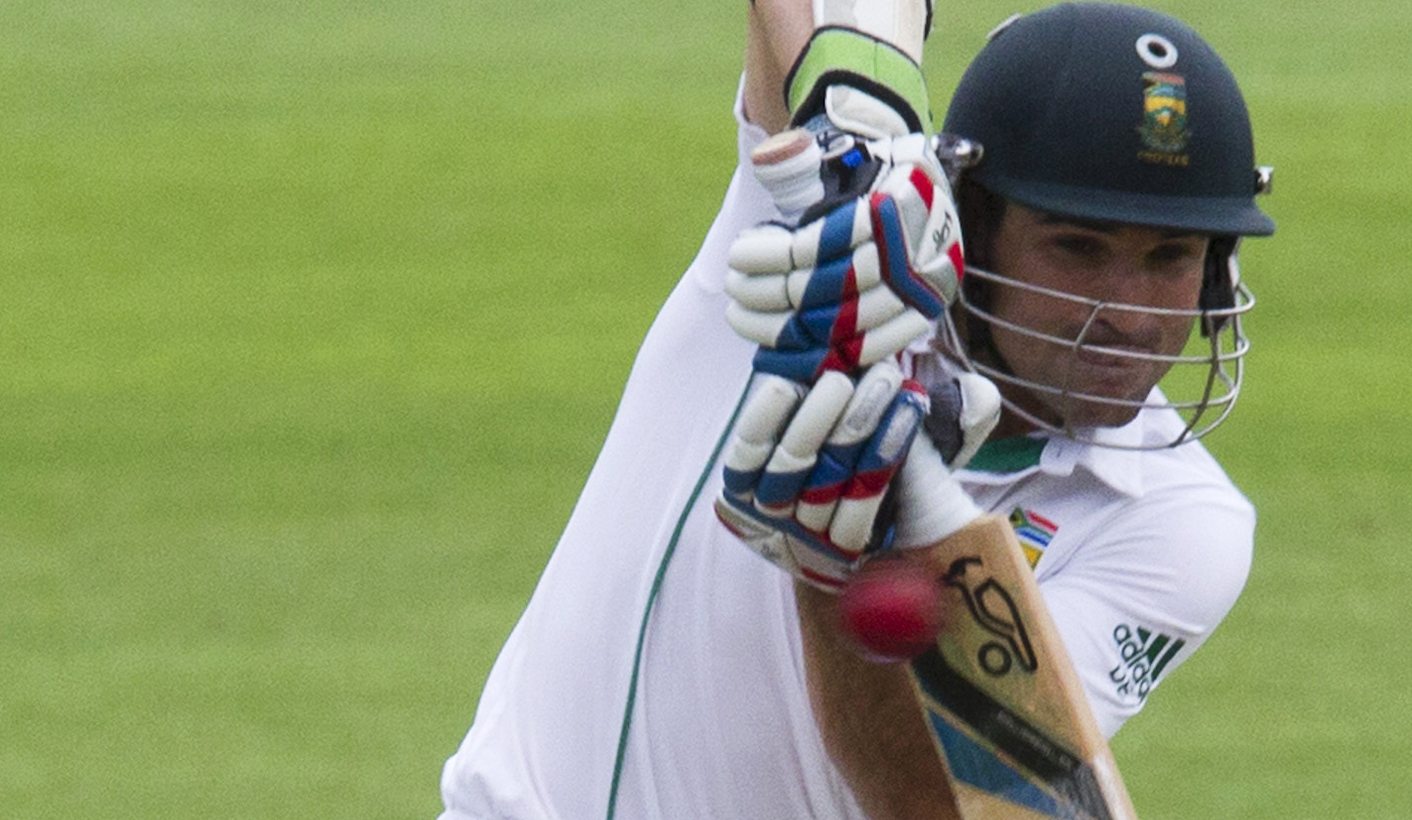 South Africa started day one of their first Test against Sri Lanka with mixed results. A century from their newly baptised opener and a mini collapse saw the Proteas go from 190-1 to 268-5. This already has all the makings of an epic Test. By ANTOINETTE MULLER.

South Africa began their era of new openers, new captain and now a new keeper, too, with some mixed results. There was an attacking opening hour, there was a hundred for Dean Elgar, and there were some runs for Faf du Plessis and a few lives for AB de Villiers. Then they went from 190-1 to to 266-5 by the close of play, a mini-collapse which could almost rival England.

Hashim Amla and AB de Villiers stuttered with the new captain guilty of a soft dismissal and De Villiers being foxed by a peach of a delivery from Suranga Lakmal. Du Plessis, too, was caught out thanks to some clever thinking from Dilruwan Perera, who shortened his length after seeing Du Plessis get away with it before.

Still, South Africa has reason to be pleased. Elgar, who for so long was made to float around the South African order, showed that there is such a thing as being comfortable in a batting position. That he had not played competitive cricket since South Africa’s domestic season ended back in April hardly seemed to matter. Elgar, the first South African opener to score a ton on Sri Lankan soil, played the perfect knock. Not only did he subdue the sceptics for the time being, his approach was nearly faultless. With the luxury of being able to attack the new ball – something which rarely happens in South Africa, he galloped along to his fifty without being extravagantly risky. He sealed his ton with a six and roared in delight while motioning to the dressing room. Elgar wasn’t under any immediate pressure to perform, after being dropped from the central contracts list at the same time as clattering the Australians around in PE, but Smith’s retirement handed him another chance.

It wasn’t quite the quintessential Test hundred. There were just 29 singles and running two thrice in his knock and, despite a frustrating 139 dot balls, Elgar seemingly always knew how to orchestrate a boundary to release some of the building pressure. This team has sometimes been accused of being too reliant on its “star” players, but that is not entirely true. Since January 2012, nine players have scored all 35 of South Africa’s centuries. The bulk of those have come from Amla and De Villiers, but Elgar finally looks like he has all the makings of regular contributor himself.

Right now, though, the visitors cannot let their foot off the clutch. South Africa is in a precarious position. With Dale Steyn sent out as night watchman and rookie Quinton de Kock at the crease, tomorrow will shine yet another spotlight on just how impressive their depth is. De Kock, who has an outstanding one-day record and has played just one Test, doesn’t have anything to lose.

He is part of South Africa’s future planning and was ushered into the team last year with the backing of coach Russell Domingo. He didn’t exactly have a memorable debut, but cricket’s formats are intrinsically linked and cross-over batsmen make for some of the most gloriously entertaining players, as Australia’s David Warner has shown.

Failure is hardly going to cost De Kock his spot in the Test team at this stage, but success, even just a little inkling of it, would elevate and confirm his status as one of the most exciting young talents in South Africa, for those who might still doubt him. Building an innings with caution and trepidation is something he has not had chance to practice much. He’s played just 21 first-class games and domestic cricket can hardly be compared to playing on turning tracks in the sub-continent.

Steyn, JP Duminy and Vernon Philander are all apt with the bat, but ideally the bulk of the runs need to come from De Kock and Duminy; stretching the bowlers too far in the Galle heat will be cruel.

First innings totals at Galle have been inconsistent of late, ranging from 200-odd to Sri Lanka’s 570-4 declared recently. It is nearly impossible to say what will or won’t be a good first innings score. Elgar mentioned at the close of play press conference that 400 was “probably a good score no matter where in the world you are playing”, but it will take some serious lower order rear guard to get there. They are not in trouble yet, but they are in a situation that has become somewhat familiar: a little bit sticky, a little bit nervy and the perfect opportunity for a future start to shine. DM