Budget vote debates: The bits you need to know 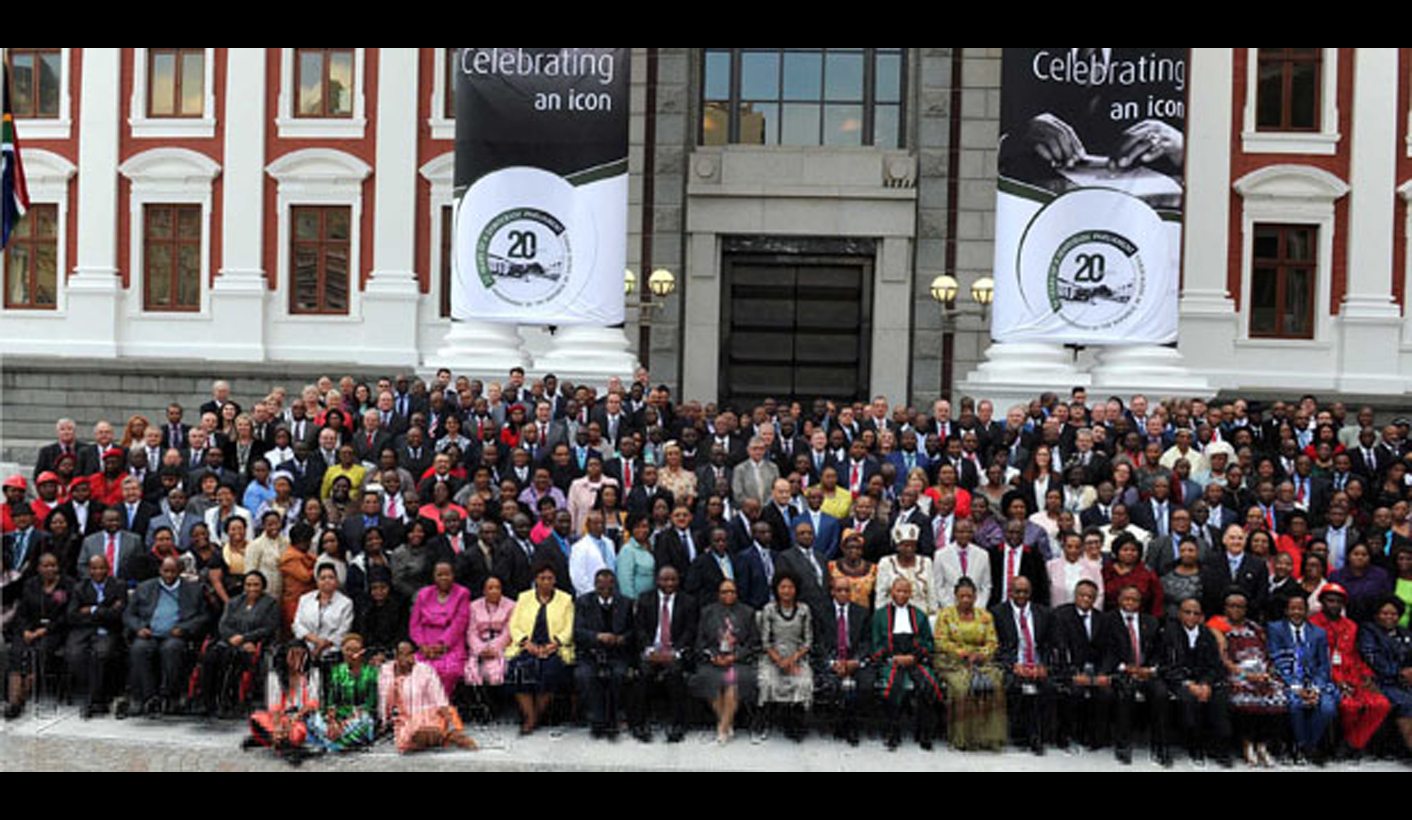 Due to Parliament’s inexplicable decision to rush through multiple budget vote debates on the same day, we saw ministerial press briefings and debates stretch from early on Tuesday morning to late into the night. Given this state of affairs, we’re left with little choice but to summarise proceedings. Heavily. (Don’t worry – we’re not turning into Buzzfeed.) But REBECCA DAVIS takes you through the interesting bits from yesterday’s bumper Parliamentary session.

Angie Motshekga is considering making History a compulsory school subject. “A country that chooses to hide its heritage and historical footprints from its children takes the risk of having them repeat the mistakes of their predecessors,” the Basic Education Minister said yesterday. As a result, the department is undertaking research in other countries on the feasibility of making History compulsory. Motshekga believes that positive effects of this move may include contributions to “nation-building, national pride, patriotism, social cohesion and cultural heritage”.

Do not say, as one unnamed colleague did: “If only History would make Angie non-compulsory”.

Basic Education is getting more money than ever. The overall budget for 2014/2015 sees an increase of over R2 billion from last year, which Motshekga says “confirms government’s commitment to education”.

Despite all this dosh, government seems to be increasingly exploring partnerships with business and foreign bodies to try to fix education. Motshekga said that by the end of the year, Vodacom will have paid for 60 digitised “teacher centres”. And the British Council has worked together with the Department of Basic Education to develop educational resources for English First Additional Language.

The DA wants Motshekga to smack down SADTU. DA Shadow Education Minister Annette Lovemore urged the government to show the SA Democratic Teachers Union who’s boss, accusing SADTU of interfering with appointments and its members of refusing to undergo competency tests and escaping accountability. “Use the courts, do whatever it takes, but make SADTU understand it does not run education in this country,” Lovemore said.

Communications Minister Faith Muthambi doesn’t want to talk about Hlaudi. Muthambi must have been naïve if she thought she could appear before a bunch of bloodthirsty journalists and think they would restrict questions to matters pertaining to the budget of the Government Communication and Information System (GCIS). Predictably, the weather in her pre-budget debate briefing was partly Hlaudi. But Muthambi was giving nothing away about the fracas that has erupted over the appointment of acting SABC COO Hlaudi Motsoeneng as permanent in that position.

Muthambi claimed that she had not been notified about the DA’s intention to seek a high court order setting Motsoeneng’s appointment aside. When asked if she thought Motsoeneng’s position was defendable in a court of law, she replied: “We’ll cross that bridge when we come to it.” Muthambi added that when she approved the recommendation of the SABC board on Motsoeneng, she “saw nothing untoward”.

Everyone loves a ‘Faith’ pun. It’s literally irresistible. “When the President appointed the Cabinet in May, he put his Faith in Communications,” said the DA’s Gavin Davis, hinting punnily that her appointment was a strategic cadre deployment. A few minutes later, it was the turn of the EFF’s Mbuyiseni Ndlozi: “The EFF does not have faith in you, Honourable Faith”. Hopefully everyone’s got it out of their system now.

It’s still not entirely clear what the reconfiguring of the GCIS will mean. As of May’s Cabinet announcement, the old GCIS has been “disestablished” and replaced by the new Department of Communication, which will house the GCIS, Brand South Africa, the Media Development and Diversity Agency (MDDA), Independent Broadcasting Authority of South Africa (ICASA) and the SABC. Cynics say this is to allow government to more efficiently oversee the production and dissemination of propaganda. Muthambi said the reconfiguration would allow “new possibilities” for “more effective and meaningful communication with citizens”, though her address was low on details as to how.

The Justice Minister says Thuli’s office must work more efficiently. Minister Michael Masutha, speaking in response to the Public Protector’s complaints that her budget is inadequate, said that there were cases that could be handled by other bodies instead – like the South African Human Rights Commission. Madonsela’s office should enter into arrangements with such entities “in the interest of contributing towards efficiency”, and to avoid overlap, Masutha said. But he denied that there was any government plot afoot to “clip the Public Protector’s wings”.

The Deputy Justice Minister wants to know what Thuli’s been up to, anyway. Deputy Justice Minister John Jeffery expressed some dissatisfaction that the department only hears about some high profile investigations undertaken by the Public Protector, given that her office completed more than 24,000 reports last year. “What were they about? Do any of you know?” he asked journalists. Nobody replied, but it seemed to be a rhetorical question.

2024 is going to be awesome for South African women. Maybe. That’s because Justice Minister Masutha announced that it would take a full ten years for 106 dedicated Sexual Offences Courts to be set up. If only they hadn’t decided to scrap them in the first place.

Oscar is lucky. There’s a backlog of 30,000 cases on the South African court rolls, the Justice Department said. Bright side? That’s an improvement on last year, when there were about 34,000.

The housing situation is bad and sad. Human Settlements Minister Lindiwe Sisulu admitted that the delivery of housing across all provinces has “dropped drastically”, by an average of 25% over the past five years. The problem, in crude terms, is that too many people are moving to South African cities, and there isn’t enough land available for them. “We are ill-equipped to deal with this rate of urbanisation”, Sisulu said, though she promised 1,5 million homes over the next five years.

The so-called housing “waiting list” ain’t working. Finally cottoning on to what civil society groups like the Socio-Economic Rights Institute (SERI) have been saying for ages, Sisulu says they need to overhaul the allocation system, because there isn’t a “credible database” to work from at the moment. She claims a new, improved housing database will be up and running within 100 days.

Everybody thinks they deserve a house. Sisulu admitted that the government has over-promised and under-delivered. “I myself was alarmed when looking through a housing waiting list, to see how many 18-year-olds assume that government owes them a house,” she said, criticising an “unfortunate culture of entitlement among our people”.

Sisters will be doin’ it for themselves. Sisulu said that in August, 1,956 houses will be built in each province for women, by women, because “when you need a man for a job, get a woman”.

Lindiwe Sisulu loves Max du Preez. In her speech Sisulu paid tribute to “the pale native, Max du Preez” because he is apparently an “ardent supporter” of the ministry’s plans.

Those new immigration regulations are staying. Home Affairs Minister Malusi Gigaba said that the new rules were necessary to regulate movement in and out of South Africa and ensure national security. The regulations have caused particular concern among Zimbabweans, whose Special Dispensation, which allowed Zim nationals to work in South Africa, will expire at the end of the year. Gigaba said he was “mindful of the anxiety among the Zimbabwean nationals in possession of this special permit” but that he would only make his mind up on the matter in August.

The state might want to get busy fracking itself. Mineral Resources Minister Ngaoko Ramathlodi said that if the state wanted “to walk into the shale gas arena on its own, it should be possible for the state to do so, side by side with the private sector”, and that the government was “looking at that”. Ramathlodi wouldn’t be drawn on a date for publishing the regulations for shale gas exploration, but said they were ready to go. He said government was consulting with Karoo communities and interest groups like the Treasure the Karoo Action Group.

Mining companies better hurry up with transformation. Ramathlodi threatened mining companies who did not comply with minimum 26% black economic empowerment, as specified in the Mining Charter, with having their license withdrawn.

The EFF has a powerful pro-nationalisation ally: Nelson Mandela. Julius Malema ran out of time to give his full speech on mining, but the text concludes with a reminder that Mandela said in 1990 that “nationalisation of mines is ANC policy, and any change to such a policy is inconceivable”. Malema is not wrong, but apparently Madiba changed his mind after a few trips to Davos.

You’re in deep trouble if you disrupt water supplies. Minister of Water and Sanitation Nomvula Mokonyane said that the government intended to “act radically” against people who collude with water-truck owners to make money. Radically yet lawfully, we trust.

The wage-gap needs to be narrowed. Labour Minister Mildred Oliphant said that it was “urgent” to tackle “the wage gap between top executives and ordinary workers” because it currently poses the greatest threat to our labour system. She was low on details as to how this would happen.

Scuba diving is the future. But white men must stop hogging it. One of the apprenticeship programmes Oliphant announced was to “facilitate the entry of women into the Scuba diving fraternity which is still being dominated by men, specifically white men”.

The word ‘strikes’ appeared only once in the Minister of Labour’s speech. And she was quoting President Zuma’s State of the Nation address when she used it, saying: “Given the impact of the untenable labour relations environment on the economy, it is critical for social partners to meet and deliberate on the violent nature and duration of the strikes”.

EFF wins ‘insult of the day’. Spokesperson Mbuyiseni Ndlozi referred to Hlaudi Motsoeneng as a “mythomaniac”, defined as a person with “an abnormal or pathological tendency to exaggerate or tell lies”. Motsoeneng was sitting in the gallery at the time, but he just smirked. DM

Photo: Some of the new members of Parliament during the family photo outside the National Assembly. 21/05/2014. Kopano Tlape GCIS.