Banking on BRICS: The developing world gets a credit card 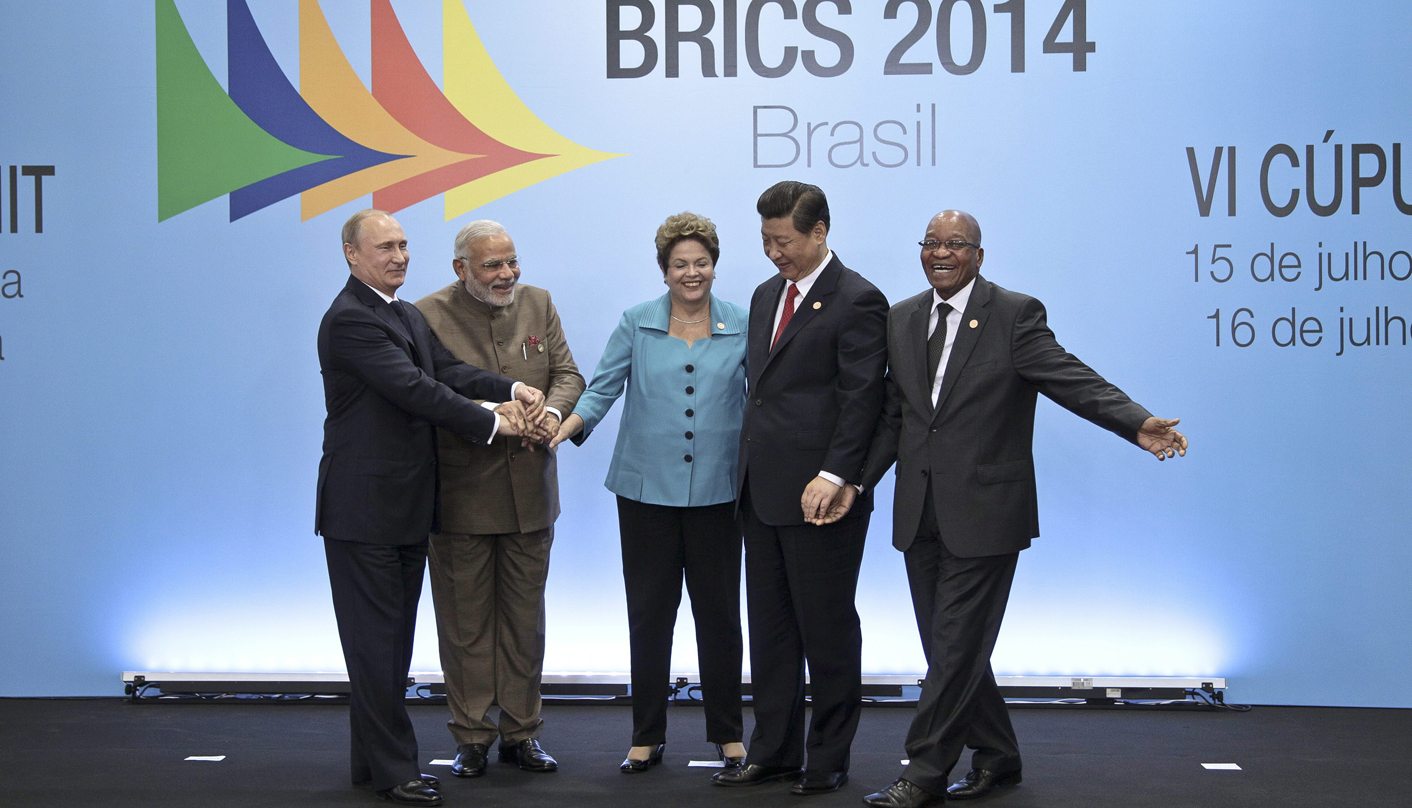 A twenty-first century truism: you know you’ve made it when you’re due for a headquarters in Shanghai. So it is with the imaginatively named New Development Bank, a.k.a. BRICS Bank, a lending institute designed to end Western global dominance and finally assert the rise of the South. Or something. By RICHARD POPLAK.

The world is a funny place. At the turn of the century, one of the evil geniuses at Goldman Sachs came up with a fancy acronym to sell his clients on the financial charms of the formerly toxic Brazil/Russia/India/China bloc. These countries, insisted Jim O’Neill, would by 2042 outrank the six biggest Western economies, and thus define the global future. O’Neill is an enormous, galumphing Mancunian, and no one who mattered at the time who wasn’t Lloyd Blankfein believed him. (O’Neill is, after all, a Manchester United fan). But in faraway capitals, in which policymakers and presidents were becoming fat on ecstatic growth rates and a commodities boom driven by the Chinese reinventing the term “commodities boom”, it all made sense. Before long—or, more precisely, in September 2006—the foreign ministers of the four rising giants met in New York City to hash out something of a plan. The first formal BRIC summit took place in Yekaterinburg, Russia, in June 2009, and by December of the following year, mite-like South Africa was invited to join, presumably as an African gateway, making it BRICS.

Everyone laughed. Some are still laughing. “BRICS is really just marketing—it’s nonsense!” explained Charles Dumas, a big-name London-based economist. But in 2001, China’s GDP had just zoomed in front of Italy’s on the growth superhighway. Today, with China ranked as the world’s second biggest economy and in the wake of the European sovereign debt crisis, the idea of Italy as an economic powerhouse is almost laughable. BRICS represents 40 percent of the world’s population, and almost all of its growth. Without addressing the irony of being concocted in one of America’s biggest, baddest money shops—i.e., that their acronym is an American funded invention invented to make American funds richer—BRICS leaders are bullish, bullish, bullish. O’Neill’s thing has become a thang. And now the thang wants its own bank.

And so in the wake of the World Cup Final, in the newly famous city of Fortaleza (where Brazil triumphed for perhaps the last time ever, a lucky 2-1 edging of Columbia), the grandees of the developing world met on July 15 to rubber stamp their approval of the New Development Bank, a lending institution designed to roll back the hegemony of the IMF and other Bretton Woods institutions insistent upon liberalisation and democratic noise-making before signing a cheque. There was talk of the NDB at South Africa’s BRICS summit in Durban last year, and the chatter amongst the punditry was that it would never happen. But now it is a reality, or as much of a reality as it can be without having lent a dime. And while the contents of its vaults are, to quote Patrick Bond in this publication, “pitiable”, the gesture cannot be mistaken for a lame one.

Here’s how it would work: each BRICS would kick in $10 billion in initial capital, for a $50 billion loan book. The bank would also establish a reserve fund, into which China would pour $44 billion, South Africa $5 billion, and the other BRICS $18 billion a piece. The entity would then fund large infrastructure projects in developing countries that the IMF or World Bank would otherwise ignore, at lower rates of interest, with fewer annoying conditions. The NDB would also function as a ballast during times of financial crisis by providing a currency reserve. Say, for instance, that the Federal Reserve in the United States tapers Quantitative Easing (AKA bond buying), and raises interest rates. If—nay, when—that happens, investors piling their cash into developing economies in order to reap bigger returns will flee back to America. It’s a game that has exposed the weakness of developing economies; India experienced a currency crisis last year when the Fed intimated that QE would be tapered. A currency reserve should, in theory, ameliorate those shocks by providing a pool of cash with which to stabilise the rupee.

But there are other, even more compelling reasons for the BRICS to build a bank. For one thing, there is the geopolitical signal it sends to the IMF and its allies, warning them that times are changing. The United States remains the IMF’s largest lender and therefore retains veto power, but Congress has repeatedly refused to usher in reforms that would allow more say for developing nations. Every day, the developing world drifts further from the IMFs ambit, and therefore from the West’s influence. BRICS believes that the NDB would step into the breach.

Moreover, the BRICS need to be assembled into more of a house. The United States and China’s bilateral trade reached $579 billion last year, while India and China—neighbours, mind—traded just $65 billion. It makes no sense, unless of course one factors in the deep tensions that remain over the disputed Arunachal Pradesh region. Narendra Modi, India’s new Prime Minister, seems to have less patience for ancient territorial disputes than he does for building India into a manufacturing powerhouse—and for that, he’s going to need money. Again, the NDB could be his credit card, and one that isn’t wholly Chinese. (There are still major cultural and legal barriers to borrowing from Chinese state-owned policy banks.)

The NDB’s numbers, however, are miniscule. President Jacob Zuma noted last year that the BRICS countries need at least $4.5 trillion in collective infrastructure development over the next five years if they hope to enter the big leagues. Fifty billion dollars barely touches the sides. But what if the NDB successfully finances a few signature dams and bridges, and helps usher Guinea or Suriname into the middle-income ranks? It’s a long shot, sure. But “[t]he plans of the emerging-market bloc of BRICS to establish a development bank usher in a long-awaited and helpful alternative to the Western-dominated institutes in global finance,” insists Xinhua.

In this, to be sure, the BRICS bank will be a game changer. DM