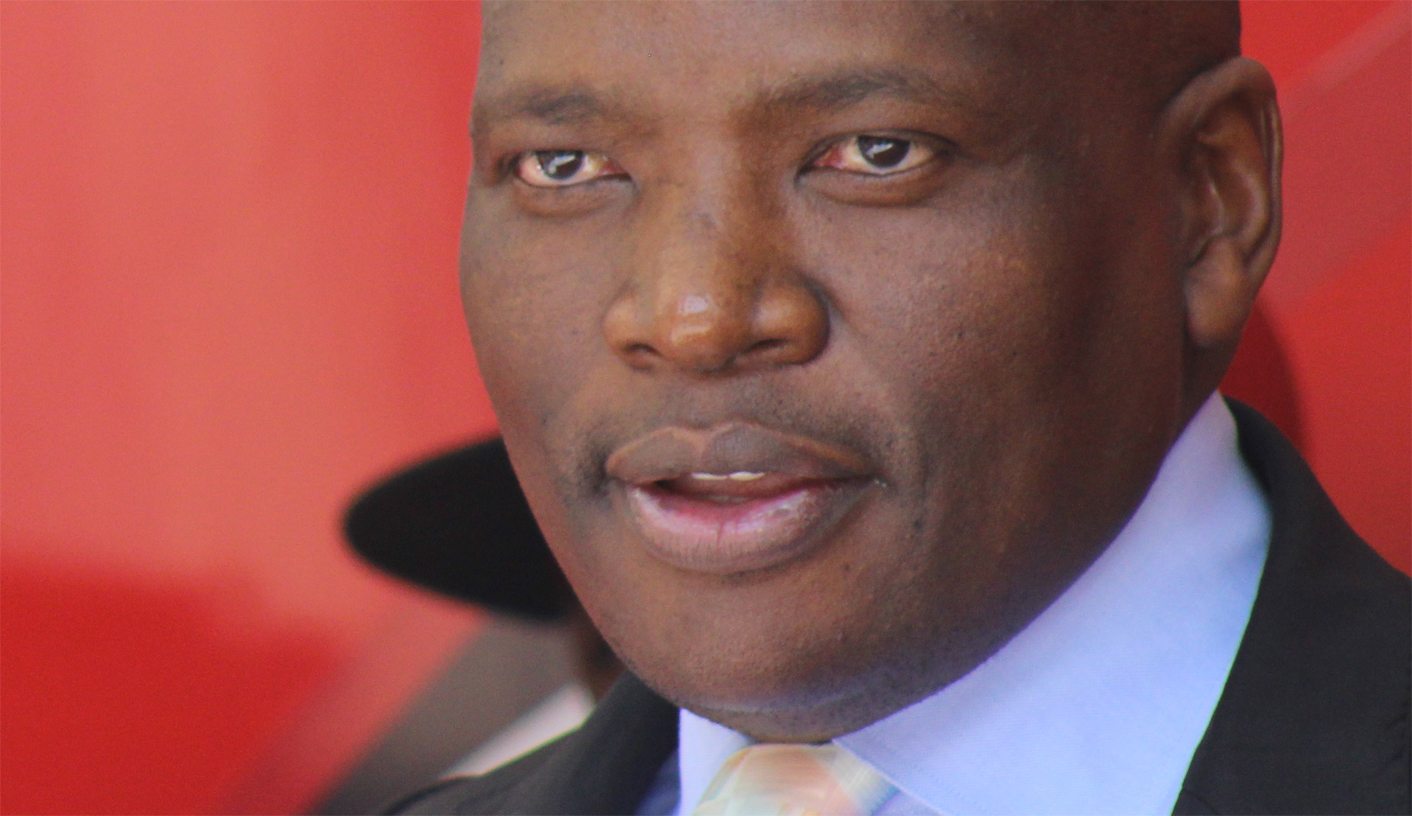 Hlaudi Motsoeneng is the new, permanent Chief Operating Officer of the SABC. All hail the new COO, then. Or not. Even by the standards of our “public” broadcaster, he is someone who has created more controversy than just about anyone else. He is, to use his phrase, the “engine room” of the corporation. Which is why just about every controversy going attaches to him. The fact that he has been appointed, the outcry, the way in which it was actually done, and the way forward from here, are all going to reveal an awful lot about how power really works in this country, and about why when the wrong thing happens, you have to have deep pockets and lawyers on call to put it right. By STEPHEN GROOTES.

When rumours first circulated that Motsoeneng was being given some big job, they were denied. But then the new communications minister herself, Faith Muthambi, made a public statement. Public, in that a piece of sound of her speaking was uploaded only onto the SABC’s website. In that statement she confirmed the SABC board had decided to appoint Motsoeneng to the position permanently (he had been there in an acting capacity slightly longer than Phumla Williams has been acting government spokesperson, and for much longer than Kgalema Motlanthe was president). She then also said that she had, with the power vested in her as communications minister, etc. etc., confirmed the appointment. And then came the cherry. With that, she said, she was now confident that with Motsoeneng at the wheel, the SABC would become the leading broadcaster in Africa.

Right. So we know where she stands on Motsoeneng, then. Well, this week, anyway.

Because last week, she went to Parliament, and told the Portfolio Committee on Communications that the SABC would implement the findings and recommendations of the Public Protector’s report into Motsoeneng. That report made what a judge would call “serious findings”. In short, there were three of them. That Motsoeneng lied about his qualifications and thus shouldn’t have been appointed as acting COO in the first place (he doesn’t have a matric certificate); that once he took the post he increased his salary three times in one year, along with the salaries of several others; and that he purged senior managers from the corporation in a way that unfair and illegal, thus costing the corporation millions in legal fees and settlements.

So, basically, he is, like Menzi Simelane before him, and perhaps Mxolisi Nxasana, someone neither fit nor proper for his post.

Of course, what he has in common with those two people is that he is beginning to look more and more like a presidential appointee. It’s hard to work out why else he would have been appointed to his new/current/old position in face of so much protest and threat of legal action that is guaranteed to end badly.

As the SABC is a corporation, it is governed, in as much as it is governed by anything, by the usual corporate governance rules and laws. As a result, the board is the organ that made this decision.

While it was first claimed this went seven-five in Motsoeneng’s favour, it actually seems to have gone six-five. In other words, the board is clearly split, nearly down the middle, on this issue. It is, even by SABC standards, a relatively new board. This was its first big decision. To be split this way, so early on, is bad news for the body as a whole.

To make matters more interesting, several of its members are lawyers in some way, shape or form. Those with legal experience who were on the losing side of this may well think that the time has already come to jump ship. They stand to gain very little from staying on. While the meeting fees may be very nice, in the end, they have reputations to protect, and those reputations are only going to be tarnished by this kind of thing.

Already the Save our SABC Coalition (a group of NGOs, but with the backing of Cosatu to give it some political heft) has suggested on Talk Radio 702 that this appointment process was in itself illegal, because the job itself wasn’t advertised beforehand. Which would seem to prove the point of Motsoeneng’s critics: this was a stitch-up job where only one person was ever going to be considered, no matter that the findings against him.

For many people, the story here is not so much about Motsoeneng and the SABC, but about the willful disregard of the Public Protector. As a Chapter Nine institution, its recommendations are supposed to be followed and implemented. Government, and the president himself, have time and again promised to respect her findings and rulings.

The political calculation here is that when it comes to the SABC, it really matters; so much, in fact, that it is worth ignoring Public Protector’s constitutional role.

Having said that, the SABC itself is losing audience, and losing it pretty fast. Just last week it admitted that its viewership figures had gone down from 57% of the TV audience to just 53%. Considering that there are only a couple of million DSTV decoders in the country, that means many, many people are watching e-TV. And that the SABC is simply becoming less and less important. As more and more people have more media options, its diet of unprofessional programming is going to lose more and more viewers. Still, any media manager would still kill to have over half the country’s audience. But they wouldn’t be as desperate as any political manager, which is what this is really all about.

The Economic Freedom Fighters have already hinted they might go to court over this appointment. They are likely to win. It is surely irrational to make an appointment like this that goes against the findings of the Public Protector in such a disdainful fashion. And of course, there are the cooperative governance rules that may have been ignored as well. Within the EFF there is also one of those flamboyant beasts, a former SABC Group Chief Executive. And Dali Mpofu would just love to hurt SABC in court.

In the longer run, though, while Motsoeneng may have more power now than he’s ever had, there is still a CEO to appoint. By appointing such a flawed candidate to the position of the COO, the board just made the job of the CEO much harder. Few people are likely to want that post, knowing Motsoeneng is supposedly beneath them, but actually running the show with protection from above.

And, of course, there is the character of Motsoeneng himself. He is proud of not being sophisticated. When asked why he believes journalists should have to be licensed, he cannot muster an argument. And he doesn’t care. He didn’t even bother to deny the claims he’d been “given a wife” by Venda traditional leaders. And quite happily admitted to stopping on-air conversations about the ANC’s Mangaung Conference.

In the end, finally, in some mad, unpredictable explosion, that kind of swagger isn’t likely to end well. It may be some time, but the closer he flies to the sun, the closer he comes to some sort of sticky political end. It may be a court decision, it may be the fact that he personally became politically too expensive for his masters, but the Comet Motsoeneng has a built-in limited shelf life. DM