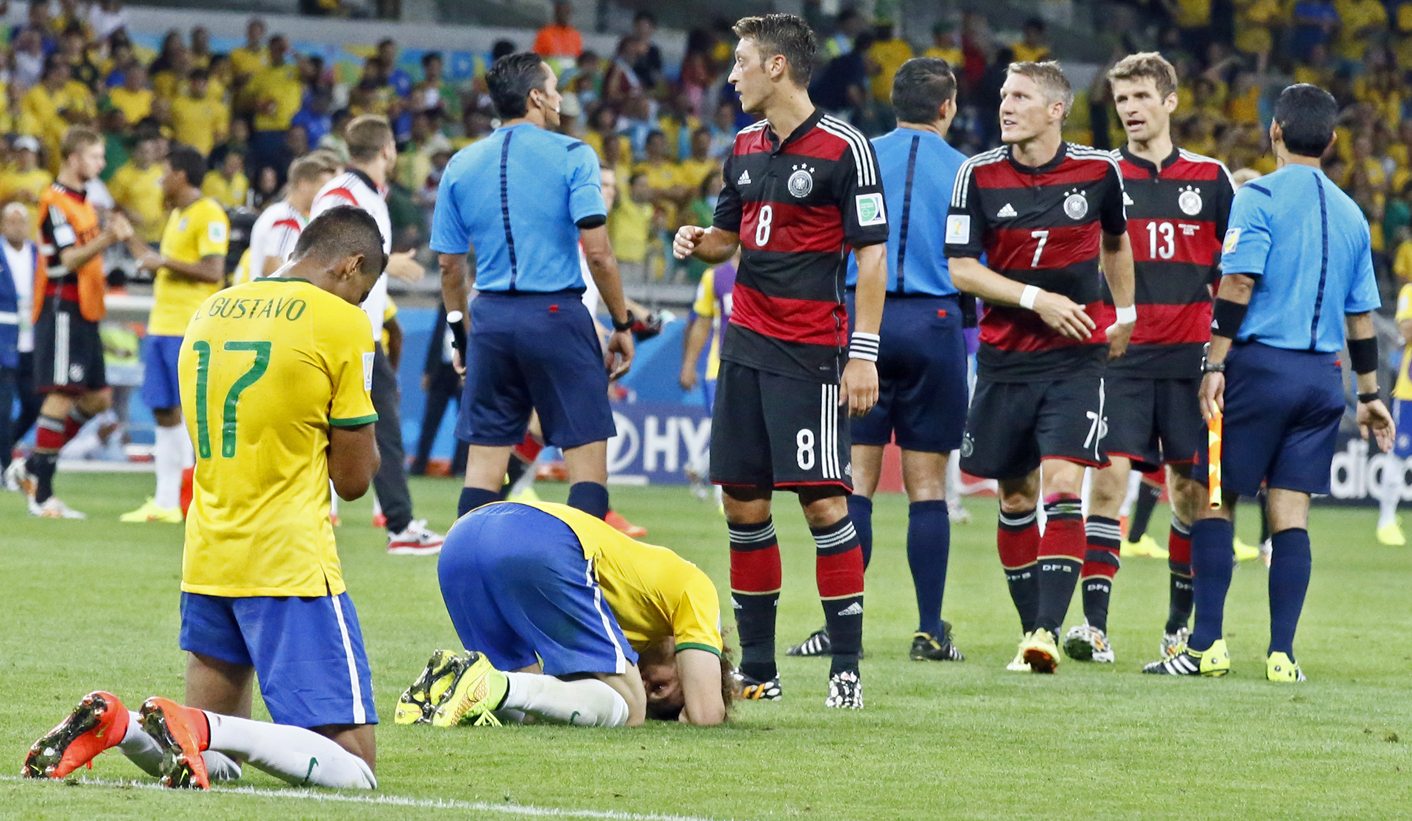 Germany made it to the final of the 2014 World Cup with an emphatic 7-1 win over Brazil in Belo Horizonte on Wednesday. It was a hopeless showing from the hosts, but out of this world from Germany. By ANTOINETTE MULLER.

Like an earthquake, it could not be predicted and like religion, it could not be rationalised. The odds on Germany being 5-0 up by half-time in their semi-final against Brazil in Belo Horizonte on Wednesday night were 2,000-1.

But sport does not lend itself to scripts or odds, especially not when the one team has been preparing for this for two years while the other has been playing the victim.

The lead up to Brazil’s humiliation was tainted with a public mourning of a player who had suffered an injury. It was like Neymar had died, not simply exited a World Cup. The public outcry, the jersey during the anthems, the fuss about his impact, everything only served to fester as an inferiority complex for the hosts.

Brazil’s shaken psychology following the loss of Neymar is perhaps comparable to 1998, when Ronaldo had an epileptic fit before the final. Ronaldo convulsed and was taken to hospital just three hours before that shambolic result.

Ronaldo was not going to play that day, but after spending some time at a hospital, he was eventually put up to the task. But Brazil were under-par. All the pre-match confidence had disintegrated and they lost 0-3 to France, notably conceding two goals from corners. Mário Zagallo, then coach of the team, admitted that the preparation was “abnormal”. The shock of a fit might be much more complex to process than losing a player through a tackle; Neymar’s influence was on par with Il Fenomeno’s. A a team losing their talisman can be detrimental. But these are pro sportsmen. Sport might love theatrical misery, but it does not mean one should bow to it.

Germany had been struck down with flu in the lead up to the match and while they had shown blips, particularly against Ghana, they learnt from their mistakes. Joachim Löw, for all his stubbornness, made the tactical changes he knew would drive his team forward in the semi-final.

But Die Mannschaft had been in training for this moment long before it presented itself. Quietly, for the last two years, they’ve been making sure they are ready for this.

No European team has won any of the previous six World Cups in Latin America, but where there is an anomaly, there is reasonable counter theory.

Over the last two years, about 50 students at Cologne’s sport university had been compiling a giant data base of players across the world. Scouting reports and meticulous detail of Brazil and its players and other opponents Germany would face had all formed part of their preparation for this tournament. Clichéd as it might be, this was German efficiency at its best.

Every run, every newspaper and every single little detail available has been put together for every team Germany would face. It’s like a German version of Football Manager, only far more nuanced.

Wednesday night started off as quite ordinary, with both sides pushing and attacking and Fred existing for reasons only known to Luis Scolari. But that all changed very quickly. It took ten minutes for Germany to open the scoring. After winning a corner, Thomas Muller was left completely unmarked at the edge of the box and all he had to do was volley home.

The piece of thread that had been flapping around for Brazil was now being tugged and pulled and just 13 minutes later, the frailties would completely unravel. Brazil went from 2-0 after 22 minutes to 5-0 after 29 minutes through sheer talent, unselfishness and complete and coherent vision. As present as the German attack was, that is how invisible the Brazilian defence had been.

By now, Germany looked almost embarrassed to be scoring so fluently and so easily. Sure there were celebrations and they might have believed that they could quite easily dismantle Brazil, but even Germany had an air of disbelief about them.

After such an emphatic first half, the second was always going to be a little bit more subdued. Germany were happy to bide their time, but they were not happy to show any sympathy. André Schürrle had come on as a substitute and made it 6-0 in the 69th minute with yet another disastrous defensive blunder from Brazil.

By the time Germany made it seven to nil, the first country to ever score seven a World Cup semi-final, the Brazilian crowd had bestowed the ultimate humiliation on their own. They were giving the opposition Oles. German’s football was beautiful, fluid and perfect.

As the game petered towards stoppage time, there was some consolation for Brazil as a rare mistake from Manuel Neuer allowed Oscar to score the most pointless of World Cup goals. German’s response was furious and frustrated, which says a lot about their standards.

Brazil were hopeless, hapless, embarrassing and this result, perhaps, was one of the most shocking results in World Cup history. This wasn’t an underdog upsetting the apple cart. This was Brazil, a team who had gone unbeaten in 39 years at home in competitive matches. It’s a team which has not lost at home since being defeated by Paraguay in friendly back in 2002.

By the time the final whistle blew, Brazil’s players were in tears, their fans were booing them and fans were rioting in Sao Paolo. Some might never recover from this – and the worst part is that Brazil can’t even go home. DM