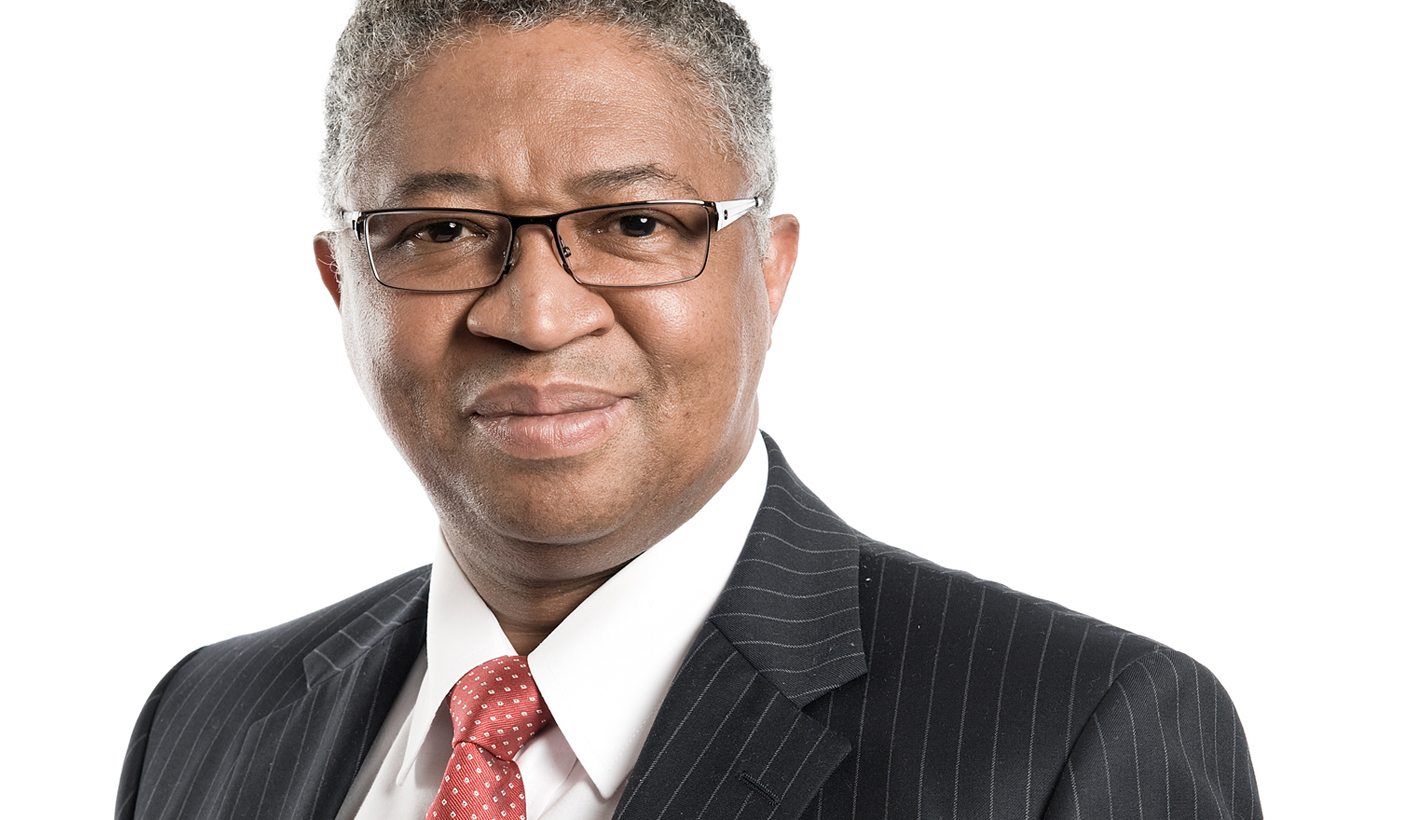 While family, friends, colleagues and dignitaries paid tribute to Stellenbosch Rector and Vice Chancellor Russel Botman at the weekend, Afrikaans singer and self-proclaimed activist, Steve Hofmeyr, triumphantly tweeted that he had just sung Die Stem to a crowd of 45,000 gathered at the “Innibos National Cultural Festival” in Nelspruit. While the two events may appear random and unconnected, they offer an entry point into an increasingly necessary national debate about the meaning of transformation in a constitutional democracy. By MARIANNE THAMM.

The thing about a sermon is how those at whom it is aimed interpret it. Good pastors have a gift for snagging particular undercurrents without ever overtly needing to verbalise the real issues at hand. But what was abundantly clear at the funeral service for the late Professor Russel Botman that took place at Stellenbosch University’s D.F Malan Memorial Centre on Saturday is the sense that Botman faced increasingly sustained resistance and pressure.

University insiders know who was exerting this pressure but Botman himself only days before he died said he firmly believed that those who opposed his vision for transformation constituted a minority of the University’s council, a statement which, in the light of his death, bodes well for the institution.

That Botman’s casket was carried out of a centre named after a man who viewed the university as an exclusive Afrikaner enclave of higher learning was not only akin to a cosmic joke but perhaps a reminder of the long road ahead.

Recently Botman had commented, “Stellenbosch has for a long-time not stood for DF Malan’s idea of a higher education just for the Afrikaner volk.”

In his tribute to Botman on Saturday Reverend Setri Nyomi, Secretary General of the World Communion of Reformed Churches, quoted John 10:10: “The thief does not come except to steal, and to kill, and to destroy. I have come that they may have life, and that they may have it more abundantly.”

Interpreting the passage, Nyomi suggested it should not be understood as “spiritual words to be read in church on Sunday and then say Amen and then go back home to business as usual”.

It was a challenge, he suggested, to “the oppressive forces of the day, both religious and secular, including the forces of empire and other strong influence whose actions lead to injustice, suffering and the death of many ordinary citizens”.

Nyomi said that like the passage, Botman had embodied “hope” – “a hope that we can describe as resilient hope, a hope embedded in the certain knowledge that transformation benefits all of society and not just some is what is good for our times. This hope believes that evil will not have the last word.”

That Professor Botman was under severe pressure the week before his sudden death from a heart attack on 27 June is not in dispute. (See Daily Maverick 2 July). Reports in the Afrikaans media the previous weekend, quoting anonymous council members, had threatened ominously that he would be facing a “motion of no confidence”. The reports also suggested Botman would be facing resistance to, in particular, his Centre For Inclusivity, established, said Botman “as part of a strategy to create an institution that would help to cultivate a welcoming culture, equality and diversity and to help [the university] transform and flourish”.

Botman survived a heated council meeting on Monday, 21 June and gave a candid radio interview to Radio Sonder Grense on the Tuesday. Shortly afterwards a complaint that Botman had “misrepresented the university” in the interview was lodged via an email to Stellenbosch University Registrar, Johann Aspeling (Aspeling is on leave and the university have been unable to confirm the complaint). On Friday Botman had lunch with University of Stellenbosch Chancellor, Johann Rupert. Afterwards he reported that he had felt unwell. He died later that night.

Six weeks earlier, on 14 June, Botman had spoken at a significant reunion of the “Lusaka Maties”, a group of 18 progressive Stellenbosch students who had dared to defy the administration in 1989 to attend talks with the then-banned ANC in Lusaka. The highly controversial meeting marked a turning point for the university, Botman said, adding: “We are still riding the waves of these changes.”

Listening to Botman’s welcome (view video here) it is not difficult to read between the lines to determine that the rector was calling on critical voices and progressive forces – such as those represented by the Lusaka Maties – to help take up the difficult, delicate and ongoing challenge of transformation.

“We are not here just to think back but to help us think about where we are going and what we must achieve,” Botman said.

He said the Lusaka delegation had faced the wrath of the then-Rector, Mike De Vries, who had written afterwards to the Ruiterwacht, the youth wing of the Broederbond, saying the visit was “a low point” and that the university would be “hurt” by the action. He added that they, as Afrikaner youth, should preserve four “civilising values” of the university, including the Christian religion, a healthy relationship with authority, disciplined freedom and a sense of responsibility, including a respect for marriage.

De Vries’ missive said Botman (in what can now be read as an aside) proved the “disconnect between values and reality. It does not help that you acknowledge values that you live differently.”

This weekend Jacob Rooi, writing in Rapport Weekliks, recounted how Botman’s predecessor, Professor Chris Brink – the first “outside” rector who was not a Stellenbosch University alumnus or a member of the Broederbond and who initiated “transformation” at the institution – was “kept on his toes”, and how at one function, the master of ceremonies had reminded him: “Just remember, Professor, this is OUR place.”

At the heart of all of this is a much larger issue of national importance that has flared and sometimes raged since 1994 – the question of identity, culture and language, particularly Afrikaans, in relation to the transformative Constitution of the country.

Prior to 1994, Afrikaner identity was constructed in what can be best illustrated as a pyramid. At its base is a language that was developed by slaves who found themselves in the kitchens of Dutch settlers. The first known writing in Afrikaans is in fact in Arabic. In 1909 an Academy was established to promote the language among white descendents of the Dutch settlers and in 1925 it was adopted as one of two official languages of the Union. The creation of a national Afrikaner identity also rested on several other tiers in the pyramid, a history, common culture and at it’s apex, religion (which led to the creation of political power – Apartheid). All of these levels were supported and reinforced by a variety of institutes, language unions and other “cultural” bodies. By 1930, writes Herman Gilomee in The Rise and Possible Demise of the Afrikaans as Public Language, there were fewer than five million people who spoke it as a first language.

By 1977 it had become the only non-European/non-Asiatic language to have “attained full university status and to be used in all branches of life and learning … All other university languages have their main basis in either Europe or Asia”.

In the 1980s theologians like Russel Botman and Allan Boesak – the so called “liberation thelogists” and authors of The Confession of Belhar – managed the extraordinary feat of discrediting internationally the very strand of religion Afrikaner nationalists had used to justify Apartheid.

After 1994 Afrikaners found themselves in newly democratic South Africa, living with a mutually agreed Constitution that is ultimately transformative and which guarantees the rights and freedoms of all its people.

While still retaining considerable economic power, without the first three layers of the pyramid – an apparently unique religion, culture and history – all that is left is language. And it is this that has become the heated battleground. It is this and also the precise nature of “transformation” that is being contested.

Dr Ingrid Tufvesson, who was fired as the executive adviser on transformation at the highly controversial North-West University in February last year, has written lucidly on the issue of transformation in a paper titled “The Politics of Loyalty: Accountability, Transformation and Redress in South African Higher Education” published by Acrawsa (The Australian Critical Race and Whiteness Studies Association).

“By ‘transformation’ I mean the conscious process of contextually specifying the multiple areas that require change in order for there to be no equivalent of the past in the present, because the past has been commonly agreed to be unacceptable and has compelled the need for change in the first place.”

Tufvesson writes that in the process of trying to understand why, “despite internal and external rhetorical commitments to transformation by universities, their management, staff, and students can actually decide and behave as though there is no common agreement on either the need for change”.

In May this year the management of North West University decided not to publish a damning report by a task team chaired by Leon Wessels into various “cultural” practices at the university, including initiation and orientation rituals as well as the use of a Nazi salute after Afriforum and Solidarity threatened legal action saying the report (read full text here) bordered on “hate speech”.

(Easily the biggest open-air concert on earth! For the first time Innibos had to close gates. And then I took that politically incorrect chance and sang DIE STEM…and 45,000+ people stood up and belted it out at full volume. I could barely swallow. That no one has forgotten that song or ever will. I am bursting with pride. Thank you.)

He added, “What is important to a society is that we are at our best when we talk and listen to each other and we exchange positions. We are at our most intelligent when we are open to the world around us.”

Zaaiman employed the Quaker saying, “You speak truth to power when power hurts” and urged the young Stellenbosch students who had come to hear the panel of Lusaka Maties speak not to sit on the sidelines but to “get our hands dirty”.

Like Jonathan Jansen, Rector and Vice Chancellor of the University of the Free State, Russel Botman embodied the gentle subtlety with which this potentially hugely divisive issue needs to be addressed. And there are many who are prepared to continue Botman’s legacy in the light of his torrid last week and the huge void left by his death.

And while much of the English media has focused on the more sensational aspects of a series of incidents at former exclusively Afrikaans institutions of higher learning, it is a mater of national importance that, at its heart, threatens the bigger democratic project. Alienating young, white Afrikaans speakers from broader, diverse South Africa poses a danger for the entire post-Apartheid society.

“It will send people rushing into the arms of the EFF,” said one commentator. DM