Dalai Lama at 79: A tiny slice of Tibet… in Centurion 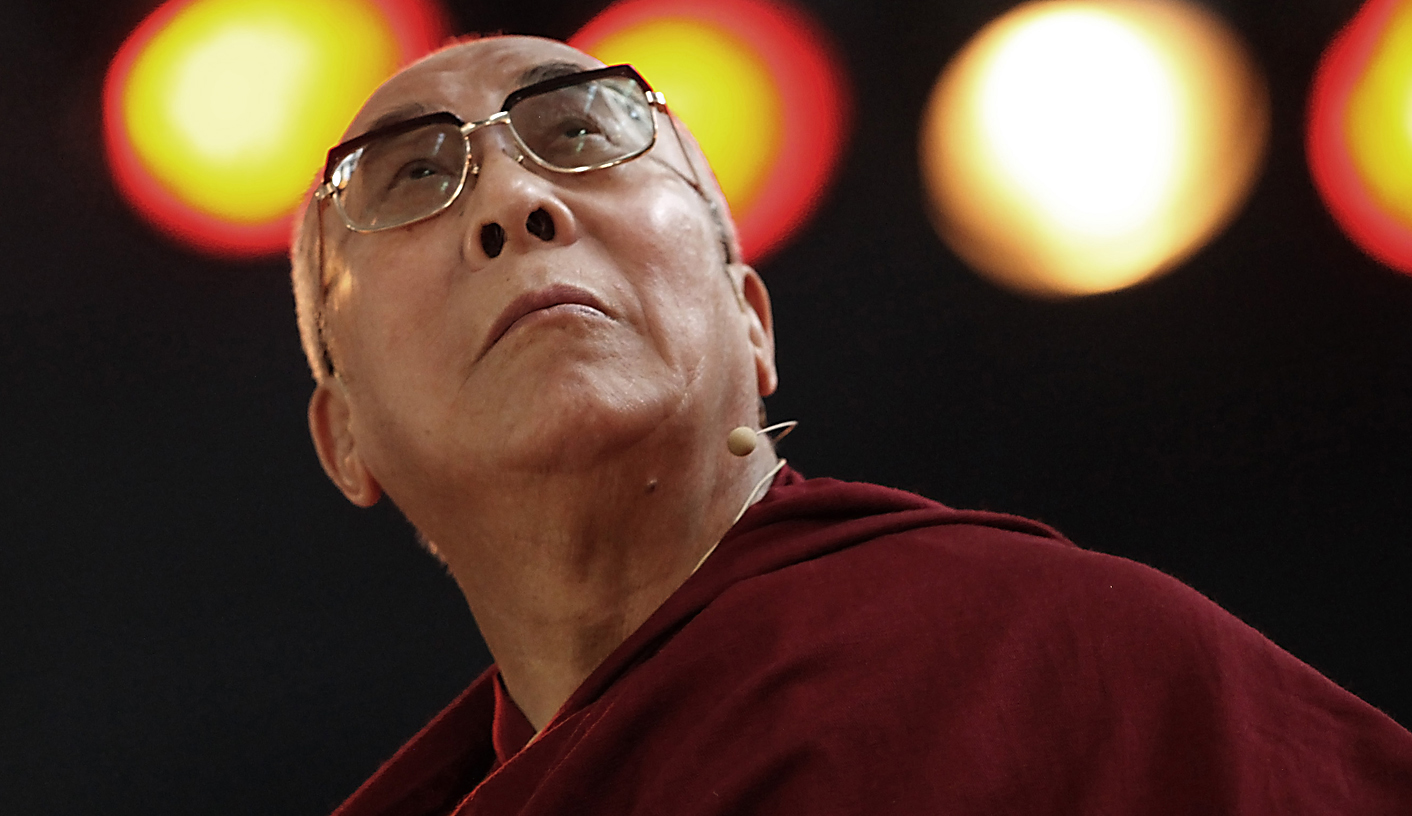 There is, believe it or not, a little slice of Tibet in Centurion’s otherwise unremarkable suburbs. SIMON ALLISON was there to celebrate the Dalai Lama’s 79th birthday, and find out what Tibet’s government-in-exile and its newly-appointed representative is doing in South Africa.

A quiet residential suburb in Centurion may seem an unlikely place to celebrate the 79th birthday of His Holiness the 14th Dalai Lama. It is. Let’s face it, this suburban home is about as far away from Dharamsala as it gets, even with the ribbons of multi-coloured Buddhist bunting on the lawn and the elaborate shrine in the corner.

Yet, believe it or not, here sits a tiny outpost of the Dalai Lama’s temporal dominion, in the form of the Office of Tibet, a de facto embassy for Tibet’s government in exile. Here also resides Nangsa Chodon, head of the office and newly-appointed representative in South Africa of the Dalai Lama himself. And descending on her garden on Sunday to mark the auspicious occasion was an eclectic collection of pro-Tibet activists, a very few supportive diplomats and, as one attendee quipped, the “entire Buddhist community of South Africa” – actually not more than a few dozen doyens of local Buddhist centres, although the joke wasn’t wrong by much. Probably.

As a global issue, Tibet has fallen off the international agenda in recent years (assuming it was ever really on it in the first place. And no, mooning over Brad Pitt in Seven Years in Tibet doesn’t count). China’s occupation of the territory has taken on an air of permanence, and human rights violations, while still routine, fail to make headlines anymore. Even the spate of self-immolation protests – where people set themselves alight, usually fatally – haven’t really got much attention.

Nonetheless, the fight to preserve Tibetan language, culture and religion continues. Even in Centurion. The Daily Maverick spoke to representative Chodon, just two weeks into the job, about the challenges of her new position, how it feels to be a permanent exile, and what happens when this Dalai Lama dies.

Daily Maverick: The relationship between South Africa and Tibet’s government-in-exile hasn’t always been easy. Although the Dalai Lama was once welcomed by Nelson Mandela himself, and has visited South Africa three times, he was denied a visa to visit SA in 2011 – apparently in a bid not to offend the Chinese. What’s the current relationship like?

Nangsa Chodon: We still hold a very strong relationship with the government, although in current years there has not been very much direct contact or prosperity in the relationship. We feel it is very important to keep our office here going. It was set up in 1996 [at Nelson Mandela’s invitation], with the purpose that we exchange history. After all, South Africa’s history is similar to Tibet’s. It has also gone through an occupation. The only difference is that South Africa is now a free country, whereas Tibet is still occupied. That is the only difference. Otherwise the feelings and the nature of occupation, everything that South Africa underwent is the same as Tibet. And we being human beings should have support from people who have experienced the same problems. We expect more support from them. We don’t need to explain to South Africans how the loss of your country feels.

DM: South Africans know a thing or two about exile. During our struggle, the ANC in exile would have hosted many events similar to this one. When were you last back in Tibet, and how does it feel to be representing a country that are not allowed to return to?

NC: I left Tibet when I was two or three. After the exile, we never returned to our homeland…there is no way that we can go freely to Tibet. The first problem is the passport. We exiles are neither Indian nor Tibetan [Chodon travels on a specially-issued Indian travel document].

Photo:  Nangsa Chodon, head of the office and newly-appointed representative in South Africa of the Dalai Lama himself. (Simon Allison)

The Chinese have made certain offers that whoever would like to come back to their homeland is most welcome…but what actually was happening is if we go to Tibet, we go through imprisonment, lots of questioning, and brainwashing against the Dalai Lama. Even at the cost of our life we would never like to go against His Holiness when he has been so kind and loving and is living himself as an exile. So we Tibetans holding any kind of post in the Tibetan government would not go back. And because we have no passport, how do we travel to Tibet? That has become a foreign land for Tibetans living in India.

Of course we feel a bit lost, and have a desire to see our homeland. But then coming into exile, seeing the life of His Holiness, we have no regrets. We Tibetans have to struggle hard at every stage. My generation is still better, we got some education…but my parents’ life in exile was terrible. They had no shelter, no food, did not know the climate or the people. Early refugee life was terrible in the beginning. But the Indian government was kind…in the past 50 years we have brought prosperity to our exile. Our home away from home is more developed than what we had in Tibet.

DM: What do you make of the spate of self-immolation protests since 2009?

NC: The self-immolations are a result of the treatment from the Chinese right from the beginning in 1959 to this day. It’s happened since 2009 that the first man self-immolated, but it’s not the result of that year, or that circumstance. It is an old disease, [a symptom] of the chronic pain in the hearts of Tibetans in Tibet that they have suffered too much, that they have no human rights to exercise their religion and culture.

The people who have self-immolated are mostly monks and nuns in the monasteries. Since 2009 there have been a lot of restrictions on the practice of traditional religion in these monasteries, and then people could not bear it. And of course people are waiting for His Holiness to be able to come back to Tibet. So that was a cry of desperation. There have been 130 people that have self-immolated, and 112 died on the spot. All of these had the same pain, and the wish for his Holiness to return to Tibet and to gain freedom for themselves. They self-sacrificed themselves for the nation of Tibet, and with prayers to His Holiness. This is the result of 55 years of PRC [People’s Republic of China] treatment towards Tibetans and Tibet.

DM: What are the political aims of Tibet’s government in exile?

Ever since we came into exile in 1959, Tibetan people as well as the leadership have been struggling and hoping and striving for independence. But since this was very hard and next to impossible, we are now seeking the Middle Way.

The Dalai Lama saw that Tibetan language culture, language everything is declining. So he thought…it would always be better to live in harmony with the Chinese. Tibet is a vast country, with good resources, why can’t Chinese people live there too? He brought out a formal proposal of what we call the Middle Way.

This Middle Way approach talks mainly about the Tibetans living under the rule of China, but as an autonomous body with legitimate autonomy in Tibet to exercise its religion, language, culture and so on. Other areas, mainly the foreign policy, would be controlled by the Chinese. This Middle Way approach is designed in such a way by His Holiness that it represents the interests of both the Chinese people and the Tibetans. We are not fighting for independence as of now, and we want to live under China, as a part of China, but we need genuine autonomy in certain areas.

DM: South Africa has just lost Nelson Mandela, our own global icon. Are Tibetans starting to worry about what happens when this Dalai Lama dies?

NC: Of course every Tibetan is very concerned. Every year we make long life prayers, a special way to request the Dalai Lama to live long through religious prayers and rituals. But despite that, His Holiness is old enough. But as of now, he’s always been healthy and he can go round and give his messages to the world. As far as spiritual leadership is concerned…the reincarnation question is a strange one for the rest of the world, but we believe the Dalai Lama will certainly reincarnate because he is indispensable for the Tibetan people. No matter we have no country, but he will be born somewhere.

This Dalai Lama has been really, really special. He had to take such big responsibilities. The invasion, facing China, taking the responsibility of leadership all at very young age. We don’t fear because he is an extraordinary leader. His wisdom is extraordinary even among the Dalai Lamas. But we hope for his long life. He has said that with his present health, he hopes to be able to work for humanity for at least 110 years, so we are not worried for now! DM

Photo: Tibet’s exiled spiritual leader the Dalai Lama attends a conference called “Living Together with Responsibility and Cooperation”  in Sao Paulo September 17, 2011. The Dalai Lama is on a three-day visit to Sao Paulo. REUTERS/Nacho Doce