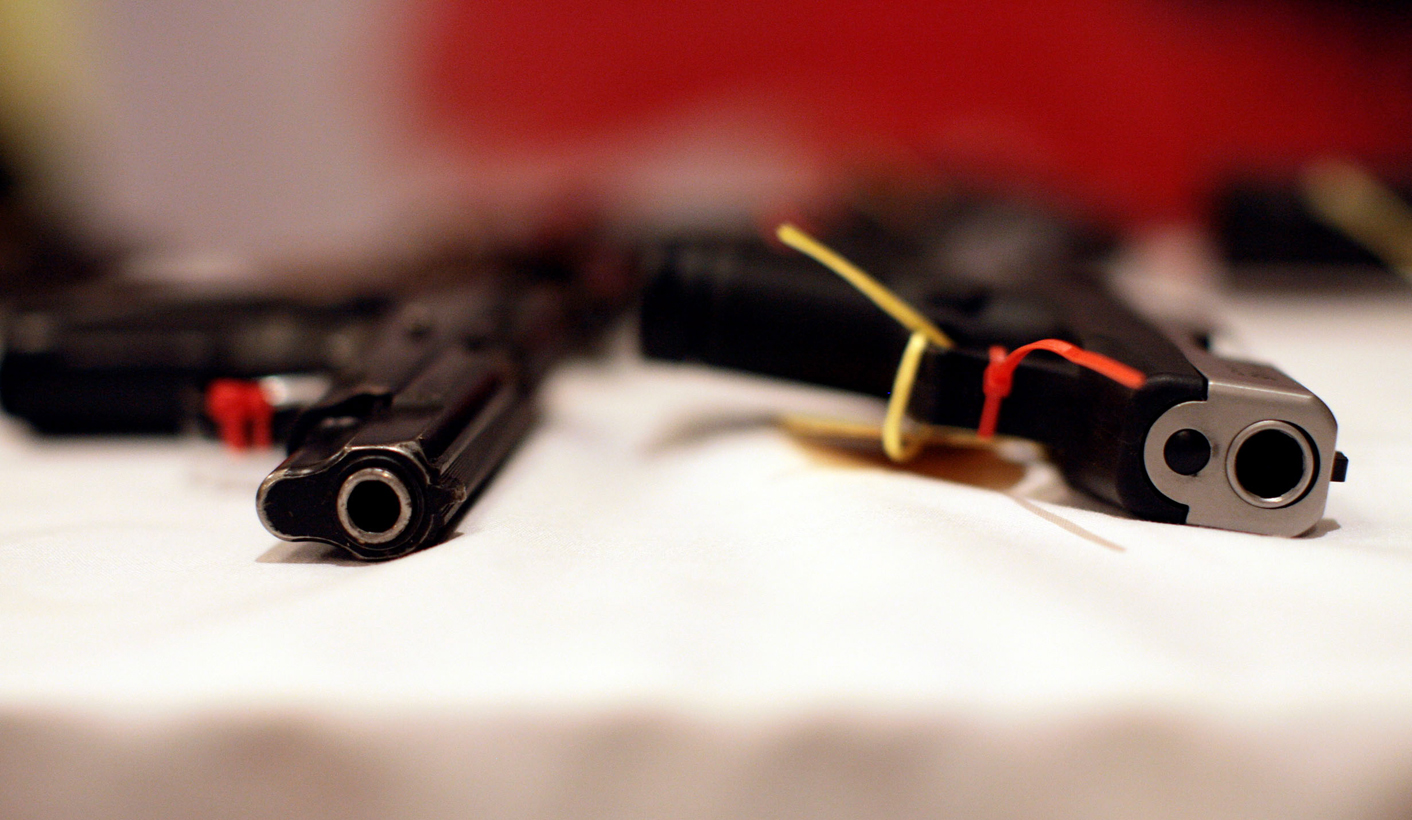 In a media statement emailed to Nhleko and National Police Commissioner Riah Phiyega, GFSA asked that a forensic audit of all licences issued since 2010 be completed before any new licences be processed.

The call was prompted by the arrest of three policemen from the Central Firearms Registry alongside Ralph Stanfield, suspected gang leader of the 28s, in Pretoria last week. The policemen have been accused of fraudulent gun licensing, including to Stanfield himself.

All were released on bail from the Magistrates’ Court in Cape Town on Tuesday. The case will resume on 4 September.

These arrests are not the first of their kind. In its email to the Police Commissioner and Minister of Police, GFSA called them “yet another example of a breakdown in the firearms control management system involving the CFR, gun dealers, training institutions and police stations” and proceeded to list recent evidence of endemic fraud and corruption.

The list includes two separate instances in May 2014 alone in which firearms—respectively confiscated and handed in during a 2009 national firearms amnesty—are suspected to have been leaked by corrupt police officers into criminal hands. The latter incident has cued the Hawks to launch an investigation into the possible sale of firearms forfeited under the 2009 amnesty.

GFSA’s email also recalls the upset delivered to the Central Firearms Registry on 14 July 2013 when its two most senior officials, Section Head of Central Firearm Registry Brigadier Mangwane, and Section Head of Firearm Compliance Brigadier Mahlabane, were suspended for bribery and corrupt licensing revealed during a Hawks investigation into one of Africa’s largest firearm distributors, Johannesburg’s Dave Sheer Guns.

GFSA first called for a licensing moratorium following the July 2013 suspension. According to Claire Taylor of GFSA, the suspension compounded their concerns about a nine-month period between November 2010 and August 2011 in which, to relieve a serious backlog in licensing applications, the CFR processed 1,048,341 firearm applications, according to the South African Police.

“GFSA believes that police did not undertake background checks and haphazardly approved applications during this period,” Taylor told GroundUp. “We cannot be sure that the people who were approved for gun licences during this time are fit and proper, because due process was not followed.”

At the time, then-Minister of Police Nathi Mthethwa called a moratorium “unnecessary,” and established a Committee of Enquiry to look into “unscrupulous dealers in firearms and illegally-operating firearms training institutions.” The Committee was originally given six weeks to report its findings and recommendations; one year later, its results have yet to be released despite repeated requests by GFSA. Taylor says that GFSA’s next option is to invoke the Promotion of Access to Information Act. The new Minister of Police could not be reached for comment.

Lieutenant General Solomon Makgale, Head of Corporate Communications for South African Police Services, also received GFSA’s plea in a Tuesday email. He says that there are no plans to implement a moratorium or a complete forensic audit. Still, he says, “We take seriously the concerns and recommendations of Gun Free South Africa. We are going to audit all licences approved by the individuals arrested and review our systems to ensure that we strengthen the approval process further.” Regular spot-checks of accredited firearm training institutions, dealers and police stations are among a number of steps SAPS plans to take in rooting out corruption and fraud, Makgale says.

According to Makgale, more arrests are underway. “This is just phase one of the entire project,” he says. “We are busy gathering and finalising other evidence against civilians, applicants, firearm institutions, and even members of our own police force.” Arresting corrupt officers, Makgale says, “is a bittersweet pill.”

Makgale’s allusion to further internal corruption, much like last week’s arrests, points to the heightening urgency of the South Africa’s broken firearm control system. “How many illegal gun licenses have been issued between the arrest of CFR’s two most senior officials last year and the three more this year?” Taylor asked. “We’re calling for a moratorium to stop the system now, so that we can identify and close the loopholes.”

John Welch of the South African Gunowners’ Association said that though SAGA, too, has been anxiously awaiting the results of the Committee of Enquiry’s investigation; they would never support a moratorium. “Are we moving back to a police state?” said Welch. “Over my dead body.”

“We are fully in favour of any reasonable measure to clear corruption and fraud, but we cannot agree with any suspension of the licensing process,” Welch told GroundUp. “If there is going to be a forensic audit, let it be done alongside the scrutinisation of new applications.”

Welch views a moratorium as untenable when it comes to one of the primary reasons South Africans cite for gun ownership: self-defence. “Attaining a firearms license currently takes up to 90 days—if not more. If a moratorium delays that further, and a person who has applied for a license is killed or injured, is GFSA going to acknowledge that they are responsible for that?” said Welch.

The answer is likely no. A September 2000 study commissioned by GFSA entitled ‘Are South Africans Responsible Firearm Owners?’ concluded that South African gun owners are four times more likely to have their firearms used against them than in self-defence. The statistic alludes to the crux of this regulatory breakdown: guns being diverted into criminal hands.

“In a way fraud and corruption is seen by police as a lesser issue than things like police brutality and police killings,” Taylor says of this. “Maybe it is, but not in relation to firearms, because it means that criminals are being armed. When a person is killed by a gun that has been leaked into criminal hands through fraud and corruption, the police have blood on their hands.”

Taylor’s view may be grounded in legal precedent. In the 26 September 2013 Supreme Court Ruling on Minister of Safety & Security v Hamilton, the court found the police liable for damages suffered by a gunshot victim, given that they had failed in their “legal duty to exercise reasonable care in considering, investigating, recommending and ultimately granting [the assailant’s] application for a firearm licence.”

Pointing to the 2000 Firearms Control Act, the legislation credited by GFSA with the reduction of South Africans gun violence between 1998 and 2009 from 34 deaths per day to 18, Taylor says South Africa has “one of the best gun control acts in the world.”

“This is something we were doing right,” she says. “Let’s not reverse the trend.” DM

Photo: Firearms confiscated by the South African Police Service are displayed during the launch of a three-month gun amnesty in Pretoria, South Africa 11 January 2010. EPA/STR