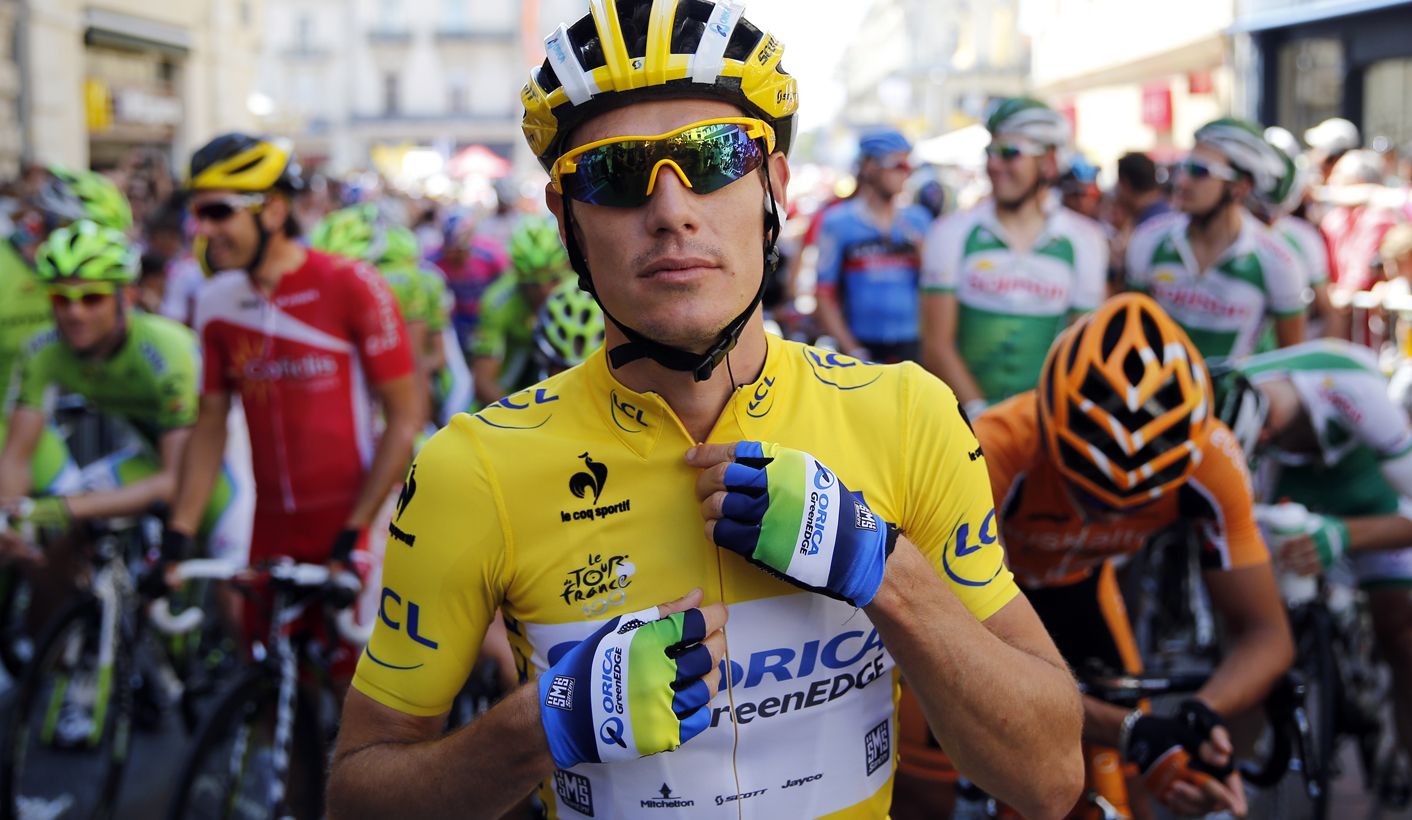 Here we go again. Another South African cycling luminary; another positive doping test. Just when everyone was beginning to think the sport was cleaning up (just kidding), Darryl Impey, who wore the Yellow Jersey in France last year, is taken down. By RICHARD POPLAK.

Cycling, unique to all sports, has developed its own literary genre: the non-apology doping statement. The genre follows a very strict formula, in which a statement of fact is presented—the test is positive—followed by ignorance of the circumstances under which the fact became a fact—I didn’t even know that were was a drug called steroids—and the insistence that all will be cleared up in good time—by next week, you’ll see, this will all go away and the testers will hang their heads in shame.

The Shakespeare of this particular poetic formulation is not who you’d think it is, but rather Floyd Landis, the disgraced American 2006 Tour de France, followed closely by fellow American dissembler Tyler Hamilton. Both men were giants of the genre, denying the undeniable for years before finally “owning up”—a genre by itself. (Of which Lance Armstrong is the Shakespeare).

But give Daryl Impey his due: the statement on his website, posted yesterday after his team, the Australian outfit Orica-GreenEDGE, dropped him from their Tour de France roster, is near perfect. Impey wore the Yellow Jersey at last year’s Tour for stages six and seven, which ipso facto makes him one of the most successful South African athletes of all time. He has had a fabulous career, one that ominously includes a 2010 stint on Team RadioShack, now famous for its continuation of Armstrong’s doping career. Although it’s difficult to believe that anyone on RadioShack didn’t dope, there was reason to hope that Impey was racing clean over the past few years. That was not, apparently, the case.

Further to the announcement of the Tour de France team and in the interests of full disclosure, I confirm that on 23 June 2014, I was notified by William Newman, the President of Cycling South Africa, about an adverse analytical finding for Probenecid following an in-competition test at the national time trial championships on 6 February 2014.

I had no knowledge of Probenecid nor have I ever taken the substance knowingly in any manner. I am committed to drug-free sport and fully intend to take all steps necessary to clear myself of any suspicion.

The notification came as a complete shock to me just days before the start of the Tour de France, particularly since anti-doping tests conducted on me on 8 and 9 February 2014 yielded no adverse results.

I immediately flew back to South Africa and was present at the analysis of my B sample on 27 June 2014, the results of which confirmed the initial analysis.

I am extremely distressed by the finding, as I have always raced clean throughout my career. Every result that I have achieved to date has been as a result of hard work and dedication on my part.

I notified my team immediately after being informed by Cycling South Africa of the adverse finding. I would like to thank them, my family and friends for their support during this difficult time. I remain confident that I will be vindicated and proved innocent of any wrongdoing.

Judged by the standards of the form, this is a classic. But like you, I can spot a few instances of Truthiness in the open tracts of mush. Impey claims that he had “no prior knowledge of Probenecid”. The drug is so commonly used as a masking agent, and has been used in this capacity for so long, that this is sort of like Impey claiming that he has “no prior knowledge of mountain bikes”. It’s like Jacob Zuma claiming that he doesn’t know what “corruption” means. Drugs tend to have big, complicated names—Probenicid has four syllables—so this sort of “I was using what?” defence can occasionally fool the credulous. But no. Probenecid is cycling’s baby aspirin.

The results came as a “complete shock”, insists Impey, mostly because further tests conducted on “8 and 9 February 2014 yielded no adverse results”. As reasonable as that sounds, professional cyclists get tested between 25 and 100 times a year—that’s almost twice a week—and if they tested positive on every occasion, it would get awkward for everyone. Probenecid has a half-life of about six hours, which is why it has been used for so long in the first place. Those two negative tests, as Impey knows all too well, have no relation to his positive test.

A RadioShack rider stating that “I have always raced clean throughout my career” is like, well, you insert your own “as an ANC politician, I have governed clean throughout my career” joke here. This was probably the time for Impey to describe his (potential) past misdeeds, explain to his fans why he might have doped in previous years and why he is doping now, and insist that once he has served his suspension, he will come back to the sport renewed and rested, ready to stay away from the syringe.

But he didn’t. And this is, of course, the problem: we cannot trust our politicians, we cannot trust our leaders, and we cannot trust our sporting idols. Impey does not live in a culture of owning up, but one of dodging the truth. He does not understand guilt, because guilt is a mutable term, and only properly applicable when all appeals to credulity have run dry. In this, Darryl Impey is a South African through and through.

There is, of course, a chance that, like a bad dream, none of this has really happened, and it’s all a big misunderstanding. But there are almost no examples of such an outcome, Pedro Delgado being cleared of using Probenicid on a technicality during his 1988 Tour win notwithstanding. It’s a shame, but we must amend the record alongside Impey’s name, due to a result that puts his entire career in doubt, aided and abetted by the fact that he refuses to come clean. DM