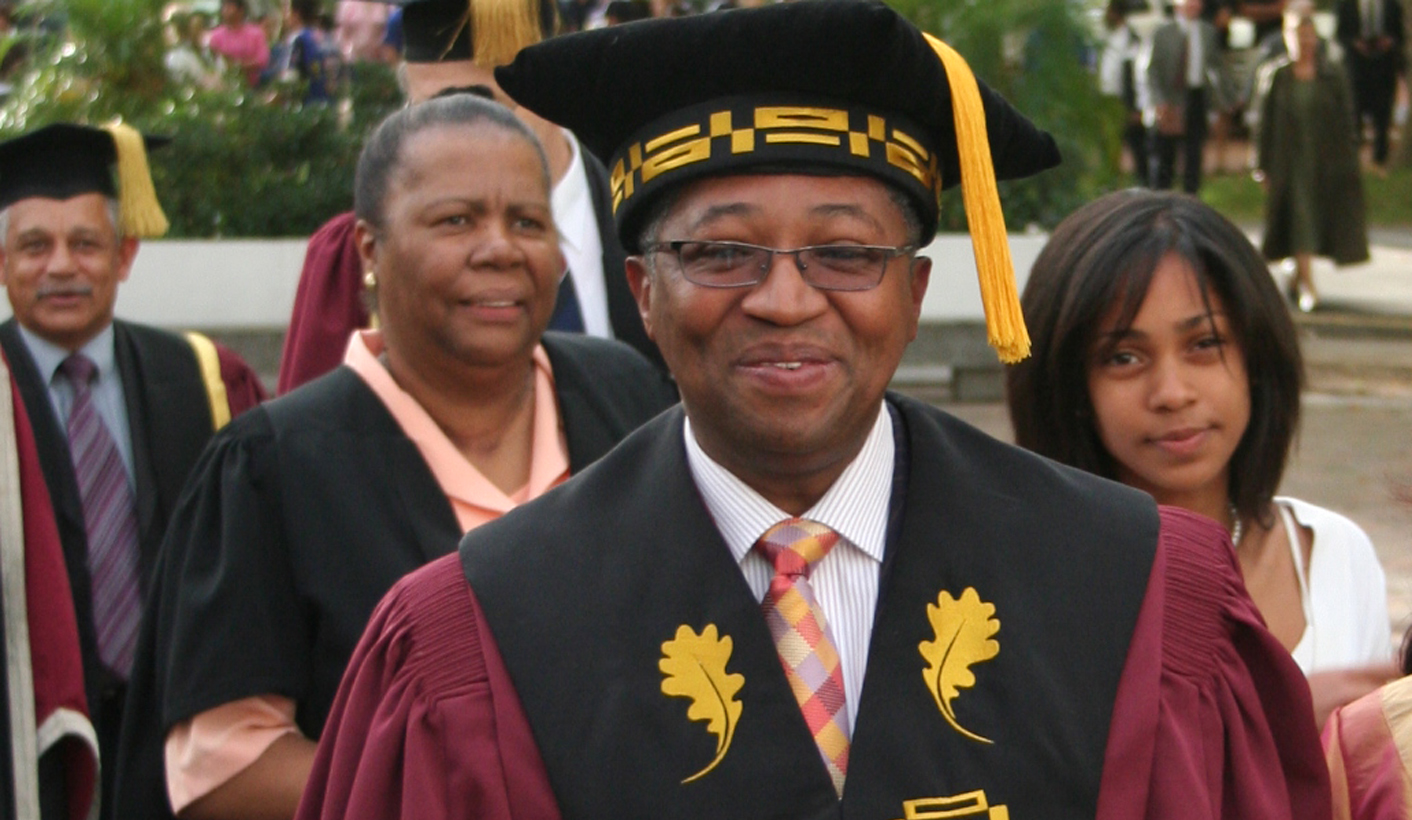 One of the grandest battles fought during the Apartheid era took place on sacred ground in the Calvinist Reform churches of South Africa. It was a theological, spiritual and ideological struggle that pivoted around the use of religion and the Bible by Afrikaner Christian Nationalists to justify the “separation” of human beings by “race”, on the one hand, and black liberation theologists who interpreted the same texts to condemn this belief ultimately as an “institutional sin” on the other. In the end we know which side won. Stellenbosch University Rector and Vice Chancellor, Professor Russel Botman, who died unexpectedly of a heart attack at the age of 60 last week, played a vital role in that struggle. MARIANNE THAMM attempts to pay tribute.

There is a touchingly beautiful story Professor Russel Botman told shortly after he had been appointed as the first black Rector and Vice Chancellor of the University Of Stellenbosch in 2007.

It was an historic appointment. The University of Stellenbosch, founded seven years after the establishment of the Theological Seminary of the Dutch Reformed Church in 1859 in the leafy town, became a home for the Afrikaner intelligentsia and the cradle of emerging Afrikaner nationalism that would soon shatter the lives of the black majority.

Six out of seven South African Prime Ministers between 1910 and 1971 were graduates of Stellenbosch University including DF Malan, J G Strijdom as well as the architect of Apartheid, H F Verwoerd.

Botman recounted to a journalist for the local Afrikaans language newspaper Die Burger, how his mother had supported his family by working as a typist for the “coloured” Nederduitse Gereformeerde Sending-Kerk in Bloemfontein while his father completed his studies in theology at the University of the Western Cape (UWC), established in 1959 as a tertiary institution for those classified as “coloured”.

In 2000 Botman had joined the University of Stellenbosch as Professor of Practical Theology and Missology, transferring there from the University of the Western Cape where he had been Dean of the Faculty of Religion and Theology.

He recalled that in that year his aging father had accompanied him to his office on the Stellenbosch campus.

“His feet were quite lame from diabetes and I asked him to sit and wait for me while I went on ahead. When I looked again I saw him sitting in an office two flights up. He told me how years ago he had come here to find a book he had needed for an assignment. They told him that they didn’t lend books to people of other races. And he said to me ‘I climbed up here because I just want to sit and see where my son is today’.”

The journey for Russel Botman, from his early years in Bloemfontein to Vice Rector and Chancellor of one of the most prestigious universities in the country as well as a respected internationally known theologian, thinker, leader and reconcilliator was a long and hugely significant one.

Botman, along with several other South African religious leaders, including Bishop Desmond Tutu and the Rev Allan Boesak (and many others) ultimately used theology to completely discredit, shame and dismantle the policy of Apartheid, which had been justified by its architects as being founded on “religious principles”.

Botman attended the Kliptown Senior Secondary School in Johannesburg before enrolling at the University of the Western Cape. In 1976 he was the public relations officer of the Student Representative Council of UWC where he led students after the 1976 Soweto uprisings.

He later recalled that the political and theological debates of that time had sparked the inspiration for what was later to become the Confession of Belhar, a “statement of belief” that would lead to the declaration of Apartheid as “a heresy”. The Confession of Belhar has subsequently become one of the “standards of unity” of the United Reform Churches in Southern Africa (a merger of three black churches) and has also been adopted in Namibia, Belgium as well as forming the basis for the Christian Reformed Church of North America’s Ecumenical Faith Declaration.

In an address to the General Synod of the Reformed Church in America, Botman recalled that “the theological engagement with the central issues underlying the Confession of Belhar started on a beautiful day in Cape Town in the second semester of 1978, two years after the tragic events of 1976 when Hector Petersen and other children were shot on the streets of Soweto by the Apartheid regime. We were then still struggling to make theological sense of the resistance to Apartheid. Our professor of systematic theology, Jaap Durand, called us to order, saying, ‘You have been quite explicit about the legal, sociological, psychological, and political science reasons for your judgment on Apartheid. I want to challenge you to find the theological essence of the judgment on Apartheid’.”

Botman and his fellow students pondered the question and turned to the work of a Swiss Reformed theologian, Karl Barth, including his ‘The Doctrine of Reconciliation’.

At the time, the question was also being considered by the synod of the Dutch Reformed Mission Church, led by Rev Allan Boesak.

At the heart of the matter was the interpretation of Dutch theologian, Dr Abraham Kuyper, who later became prime minister of the Netherlands between 1901 and 1905.

Afrikaner Nationalists and theologians who were clustered around Stellenbosch University adopted Kuyper’s “creation theology” and used it to develop a “grand natural theological foundation for separateness” or in other words to justify Apartheid.

While the anti-Apartheid struggle occurred on many fronts – from within Parliament by opponents of the government such as Helen Suzman, to the ANC in exile, to the anti-Apartheid movements of the UK and Holland to internal resistance – it was religion and theology where the battle for the soul of South Africa was fought.

In a 1999 article for the Public Justice Report titled “Blood Thicker than Justice” Botman noted that the “liberative” influence of Kuyper had initially been uncovered and stressed by a group of South Africans organised in 1981 as the Alliance of Black Reformed Christians in South Africa (ABRECSA).

And it was Allan Boesak who interpreted Kuyper’s underlying notions of “social justice” grounding the ABRESCA charter in Kuyper’s legacy, specifically the notion of social justice.

Botman was ordained in 1982 and became a Minister of Religion in the Uniting Reformed Church in Southern Africa in Wynberg. He also managed the Battswood Educational Institute’s community arts centre, a primary school with 21 teachers and 900 learners as well as establishing the Battswood Educare Centre for learners from divers religious and racial backgrounds.

He was detained along with many others at Victor Verster Prison during the 1985 State of Emergency. A year later Botman as well as Rev Allan Boesak and others formulated The Confession of Belhar.

One of Botman’s abiding concerns, apart from reconciliation and transformation, was the notion of economic justice.

In his 1999 report Botman concluded, “the transition to a new democracy in South Africa was deeply affected by neo-liberal perspectives on power, especially economic power. The forces of global exclusion have taken the place of Apartheid, thereby replacing a racial problem with a dominant class issue. These forces share a common victim-blindness and a culpability for sacrificing their victims to a false faith.”

Botman faced many issues of transformation during his tenure as Rector and Vice Chancellor of Stellenbosch University. He was perfectly placed to lead the institution into the 21st Century and had embarked on various initiatives to transform the once “cradle of Afrikaner nationalism” into a space for educational excellence and critical thought.

In his inaugural address Botman touched on the controversial issue of Stellenbosch University’s language of instruction, Afrikaans, reminding those gathered that while Afrikaans was associated with “pain” most people who speak the language in the Western Cape are black.

“Afrikaans is the hope for a better life for a large number of people across our country. As a developed academic language, it also represents hope for the development of all our other indigenous languages. The university therefore takes seriously the place and promotion of Afrikaans in a multilingual context.”

Botman committed himself also to “improving the racial profile” of the university and welcoming more black students “in their full diversity.”

His untimely death will leave a huge void, but his legacy as one of the most significant (but gentle) warriors for education and justice is secure.