Africa is a country, football edition 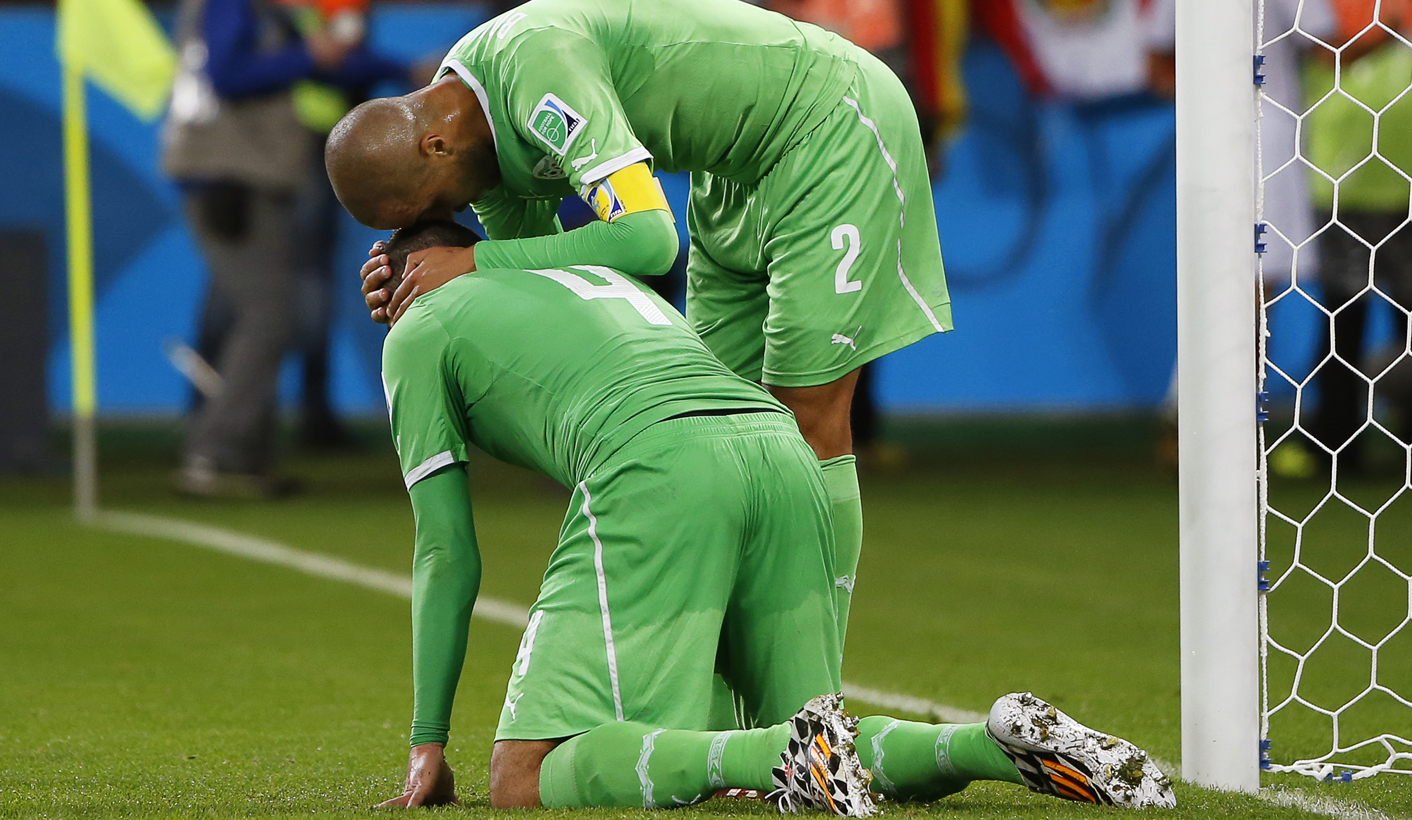 Africa remains divided along many lines, from race and religion to ethnicity. But alongside all this, there is nothing that unites the continent quite like sport. All African teams are now out of the World Cup, but the fact remains that the continent often becomes a country where sporting events are concerned. ANTOINETTE MULLER spoke to some fans to find out why.

On Monday night, Algeria, the number one-ranked team in Africa, came in for some lazy analysis. This ranged from their being labelled “underdogs” to being called “plucky” and whatever other patronising terms pundits could come up with. Algeria might not be on par with Germany on paper, sure; but to insinuate that they were vastly inferior is not going to help progression.

As the saying goes: if you judge a fish by its ability to climb a tree, it will live its whole life believing that it is stupid. Algeria is not the only team being been slapped with the “underdog” tag, although it has held its own in spite of payment and other administrative issues. African teams have done themselves proud at the World Cup in various stages.

Even with limited spots at the finals, Africa only got bumped up to five qualification spots in 1998, yet teams have surprised and entertained and won fans from outside of the continent. To call Algeria an underdog insults its efforts to improve and fails to recognise its achievements.

It’s something that gets fans of African football hot under the collar and there is nothing that unites Africans quite like sporting achievement on any level. When Chris Froome won the Tour de France in 2013, South Africans and Kenyans were eager to claim him as one of their own because his success symbolised something that differs from the way Africa is usually perceived.

With the World Cup, a cursory glance at Twitter and Facebook would have painted a picture of just how strong that sense of belonging is for Africans when it comes to sport. Pan-Africanism is alive on the sporting field.

Yet outside of sport, Pan-Africanism is a concept that is still struggling to take foot. When South Africa isn’t arguing with Kenya over visas, the president is having a go at the roads in Malawi. Far too often, one country spends much of its time pretending or thinking it is better than the other. Yet put up a World Cup and that changes. It might sound shallow, but when there is a global showpiece on, Africa becomes a country for many sporting fans. Why?

The general theory is that it stems from Africa’s history with its colonial overlords. You don’t need to dig too deep to discover just how much of that brutal history is shared between the countries in Africa. But there is also a sense of African countries often being told they are inferior or patronised by media.

A World Cup presents a chance to compete on equal footing and show the world the continent is better than how it is portrayed. Yaya Toure has often said that he is Ivorian first and African second and he represents the continent as well as his country.

It’s a strange concept that doesn’t really exist elsewhere. Europeans or South Americans aren’t going to start cheering for rivals as feverishly as Africans support most teams from the continent. Beyond a sporting context, Gerald Olende, a fan from Kenya, believes that the lack of participation plays a part.

“The number of slots given to African countries in the World Cup is not proportional to the number of countries in the continent, so traditionally we support the few countries representing Africa. It may be different, for instance, if we had 10 or 13 representatives, but the moment we have five out of 54 nations,” he says.

Beyond that, he also believes that Africa’s common history unites the continent, but outside of sport, there is a broader need and will to do well globally.

“Africans do have a lot in common, from the colonial history, early exclusion from the global economy and current low to middle income economic status. There is definitely an African dream out there and it stretches beyond sport and extends to greater participation in the global economy, too,” says Olende.

“I’m old enough to remember Cameroon against England at Italia ’90. It’s my first memory of a live football match. I think it stands out because of how much everyone around me was emotionally invested on Cameroon winning. It’s the first time I remember being hurt about the outcome of a football match and the first time I remember identifying as African,” recalls Moses Muchapirei, a fan from Zimbabwe.

Muchapirei also feels that how Africans feel they are perceived by the world plays an important part in Pan-Africanism in sport.

“Pan Africanism is an important idea but it can also be dangerous. I know that African people are bound by a perception that the world sees them as inferior. How real this is, I can’t tell. But the perception is definitely real,” he says.

“As such, celebrating the achievements of fellow Africans serves to defy those perceptions. It’s definitely not racial in my opinion. In Zimbabwe we were always proud of our cricket team in the 90’s. It was pretty much all white. We always got behind the black brothers at tennis. Nick Price’s achievements were celebrated with relish. Kirsty Coventry was given a national order of merit by Robert Mugabe. I would have rejected it if I were her but the point is our Bob knew how much her achievements meant to the people,” he adds.

Dylan Blake, a third generation South African, believes that although the conception might seem superficial, it is an important part in moving forward and getting countries to bond beyond global sporting events.

“If you’ve lived in South Africa for the past decade you can see how horrifying xenophobia can be, and even more so since a lot of those countries whose residents have come to SA to seek a better life for whatever reason supported a lot of displaced South Africans during Apartheid,” Blake says.

“Anything that can improve the relations between the common person from different countries in Africa and help everyone realise we’re all in the same boat and the only way to improve everyone’s lives is to work together, no matter what race, religion or country, is good in my books. Unfortunately it seems to happen only once every four years, [so] the trick is to keep it going in between ‘continent relation building’ events,” he adds.

Shahid Ahmad, a first generation British-Indian, believes that it is exactly this that can be so confusing for some outsiders. He only recently discovered the concept of Africa being a country for World Cups and while he understands the deeper connection, it’s the lack of support on the bigger scale that is lacking.

“I do understand why there may be a stronger bond between African countries. I’m no historian nor do I wish to sound patronising but as a ‘newer’ continent I’m sure Africa feels stronger together. But, admittedly from a long way away, I don’t see any evidence of it. Where are the political friendships? Where is the support from one African country to another when there is trouble, whether that is terrorist related, humanitarian or corruption,” says Ahmad.

That unity is exactly what could help propel the continent forward, if it’s harnessed properly. Cedric Abrahams is a third generation South African, with great grandparents of Jewish Lithuanian descent, but he strongly identifies as African and believes there are big benefits to Pan-Africanism beyond sport.

“Many clichés spring to mind: strength in unity and so on, but there are truisms at their origin. There are benefits, such as trade and beneficiation of raw materials, to promote growth on the continent. Growth can benefit all Africans if we could move beyond narrow and selfish interests,” says Abrahams.

Outside of Africa, the teams have also won over fans. Shivam Manghnani, a soccer fan from India, fell in love with Ghana after their 2010 World Cup performance and has since made a concentrated effort to follow African football. He’s taken to watching Africa Cup of Nations tournaments and understands how the concept of “For Africa” can come across as lazy and patronising, but also sees the positives it holds in the long term.

“As an outsider to the continent I can see why people find ‘for Africa’ very patronising. I don’t think this should be the case because if various African sides do well, then in the long term we could see even more participation for other African teams which will then boost infrastructure in the continent. However I do think sometimes the patronising goes too far and all African teams are grouped under the same stereotype (e.g. poor defensively),” explains Manghnani.

Lazy stereotypes, “the African way” jibes when news of strikes over pay gets out and “doing it for Africa” are all concepts that toe a fine line between being shallow and truthful. The concept that Africa is a country during the World Cup might be somewhat superficial, but in the greater scheme of things, sport’s role in society cannot be denied. It would be obtuse to expect everyone to get along all the time, but if the continent can show so much support for each other on the sporting field, surely there is hope that someday in the future, the same can happen off it? DM

Photo: Algerian players Essaid Belkalem (bottom) and Madjid Bougherra (up) show their dejection during the FIFA World Cup 2014 round of 16 match between Germany and Algeria at the Estadio Beira-Rio in Porto Alegre, Brazil, 30 June 2014. Germany won 2-1 after extra time. (EPA)