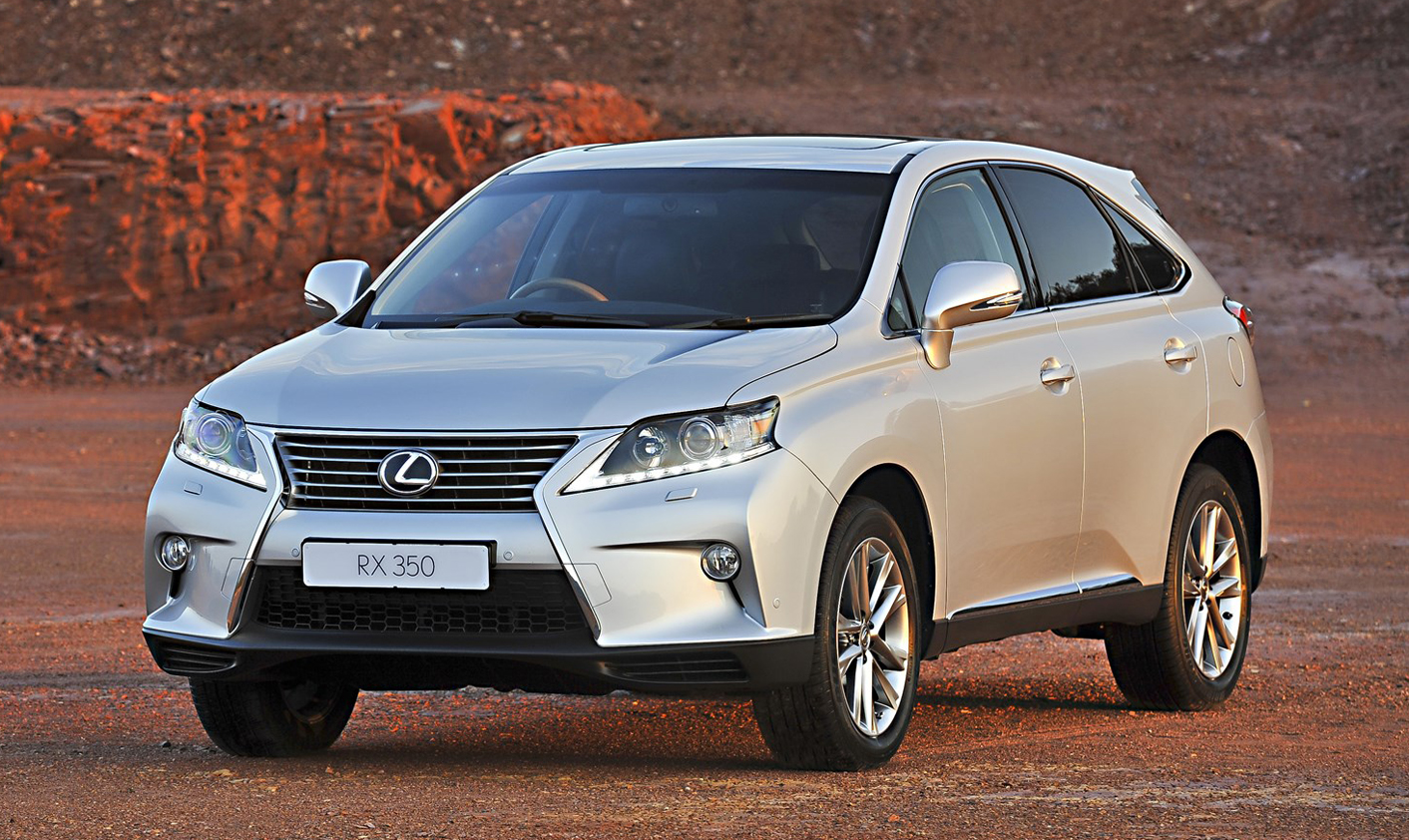 It’s taken the Lexus brand a long time to emerge from the shadow of its Toyota parent, and to establish itself as an admired, if relatively small (read exclusive) player in the premium vehicle segment. Rather than taking the German Big Three head on, Lexus is creating cars that reflect the individuality of the brand. The recently spruced up Lexus RX350 is a perfect case in point. By DEON SCHOEMAN.

You could blame the South African obsession with SUVs on several factors.

There’s the allure of driving a 4×4 in a country where adventure beckons off the beaten track. But there’s also the fascination with vehicles that are big, and powerful, and yes, secure in a world fraught with kamikaze taxi drivers, road rage, and the blue light brigade.

On a more pragmatic level, there are also attractions such as space, versatility and practicality to consider. But most of all, SUVs are a symbol of status, and of success.

To be seen behind the wheel of a fancy 4×4 is confirmation of wealth and good fortune. Size, it seems, does count in some cases!

Enter the Lexus RX350. By full-size SUV standards, this luxury all-terrainer looks surprisingly sleek and svelte. It’s tall without being oversized, while the ground clearance is ample, if not nearly as elevated as some of the more serious go-anywhere machinery.

The styling, while conforming to the basic SUV configuration, has developed a much more distinctive character since the first RX350 arrived on the scene. Most notably, the front-end treatment is now dominated by the so-called spindle grille that has become a hallmark of current and future Lexus design.

Together with larger, hungrier air intakes and reprofiled, edgier headlight clusters, the result is less generic and more confident appearance – vital in an age where brand consciousness dictates that an unmistakable identity is a key element of overall desirability.

Other visual highlights include 19-inch alloy wheels, which suggest some sporty intent, but also confirm that the RX350’s all-terrain talents aren’t geared for the really rough stuff, but rather designed to ensure unflappable poise in a wide range of driving conditions.

The rest of the aesthetic treatment remains familiar RX territory: the sloped roofline culminating in a subtle roof spoiler, the high waistline, and extensive colour coding with chrome accenting. The only nod to the SUV’s off-road intentions is the contrasting, scuff-resistant black finish for the lower sills, the rear apron and the front lip spoiler.

Compared to the usual luxury SUV brigade – the BMW X5, Mercedes-Benz ML-class and Audi Q7 – the RX350 is a slim and trim machine, suffering less from ostentation and bulk than its German rivals. Instead, there’s a sense of elegance which could be deemed too plain and too conservative by some, but will be considered classy by others.

Talking of which: the Lexus RX350 under scrutiny here has some extra tricks up its sleeve. Designated Special Edition, this latest addition to the RX line-up is an attempt to inject further exclusivity to an already upmarket package, while also offering a sprinkling of advanced tech.

Perhaps the most obvious element of the SE package is the use of bamboo finishes on the steering wheel rim, the centre console, and the door panel armrests. I’m not really a fan of wood in cars unless they’re classics, but the bamboo treatment looks and feels surprisingly attractive, and it exudes a sense of rare authenticity.

The SE treatment includes the standard fitment of adaptive front lighting, which swivels the xenon headlights when turning into corners to enhance visibility. Then there’s the head-up display, which projects navigation directions, vehicle speed and audio information in the driver’s field of vision.

The projected satnav instructions are particularly useful, because you no longer need to glance at the navigation display to verify the audio prompts.

Have I mentioned the 15-speaker Mark Levinson sound system that’s been tailored for the specific acoustic properties of the RX, and delivers 7.1 surround sound? It can even make music streamed from your iPhone sound pretty decent.

All of this is in addition to the RX350’s usual full-house array of standard kit, which covers most of the luxury bases: leather upholstery, heated and ventilated front bucket seats, auto-activated headlights and windscreen wipers, Bluetooth telephony, and a full-colour display which acts as the interface for key vehicle functions and the RX’s infotainment system.

On that subject, Lexus is persisting with the use of a mouse-like device to navigate the display’s menu-based interface – and it remains as fiddly and unintuitive as before. It’s one area where Lexus trails the opposition.

And while we’re pointing fingers, the pedal-type parking brake reminds me of old-school Mercedes-Benz models, and by now, Lexus should have moved on to the electronically devices which have long become the luxury car norm.

I liked the motorised tailgate, although if you’re in a hurry, it seems like a long time before it opens or closes. It provides access to a fairly generous cargo space – certainly big enough for family luggage, or a couple of golf bags.

There’s also no shortage of space in the cabin, with generous accommodation for four or even five occupants. The rear seats are adjustable, and can also fold flat to create extra cargo space in case of an extended shopping spree.

The technical underpinnings of the RX350 Special Edition remain identical to those of the standard EX version, which means there’s a 3.5-litre V6 nestled under the SUV’s bonnet. Credited with 204kW of maximum power and a 346Nm torque peak, the petrol unit is lusty enough to endow the Lexus with swift dynamics.

Admittedly, the engine’s delivery is on the peaky side, compromising in-gear tractability and requiring generous use of the rev band. But there’s always enough urge on kick-down to get past slower traffic.

Not that outright performance is top of mind when it comes to SUVs, but lively responses are always useful, be it around town, or when cruising on the open road. The Lexus claim of 8.0sec for the 0-100km/h sprint time, and a 200km/h top speed, seems entirely feasible. A six-speed automatic gearbox delivers the kind of smooth, seamless shifts you’d expect of a luxury SUV.

The ride quality is excellent, thanks to a MacPherson strut-based front suspension, and a double-wishbone rear configuration. There’s enough damping to soak up the worst of South Africa’s roads, but linked to ample control to prevent the Lexus from feeling soggy, despite its two-ton kerb weight. The steering feels too numb, but frankly, the RX350’s target market is unlikely to care.

For all its city-slicker looks and sophistication, the RX350 is endowed with all-wheel drive, which is useful both on and off the road. It adds confidence to off-road excursions, and the Lexus will happily tackle gravel roads, making the most of the all-wheel drive’s traction and its 180mm ride height.

Without a transfer case and low range, this is not a real off-roader in the Toyota Land Cruiser league, but the RX350 will get you places a normal road won’t, and it will do so in style. The all-wheel drive also delivers extra traction and composure during on-road use.

And on the road is where most RX350’s will spend most of their time. Like so many luxury SUVs, it’s all-terrain capabilities are considered a bonus rather than a necessity, and most owners will be attracted by the SUV’s luxury, space and elevated stance.

In its latest guise, the Lexus RX350 continues to provide a smart and desirable alternative to mainstream luxury SUVs. Its mix of style and individuality continues to attract a discerning buyers who prefer something a little bit different from the norm.

Of course, those with an environmental conscience may want to opt for the equally comprehensively equipped, but hybrid-powered RX450h – although, it has to be said that an eco-friendly SUV sounds like an oxymoron to me!

The RX350 Special Edition, however, delivers further levels of exclusivity compared to the normal EX, and may just become the 4×4 of choice for all-terrain fashionistas. Designer khaki, anyone? DM