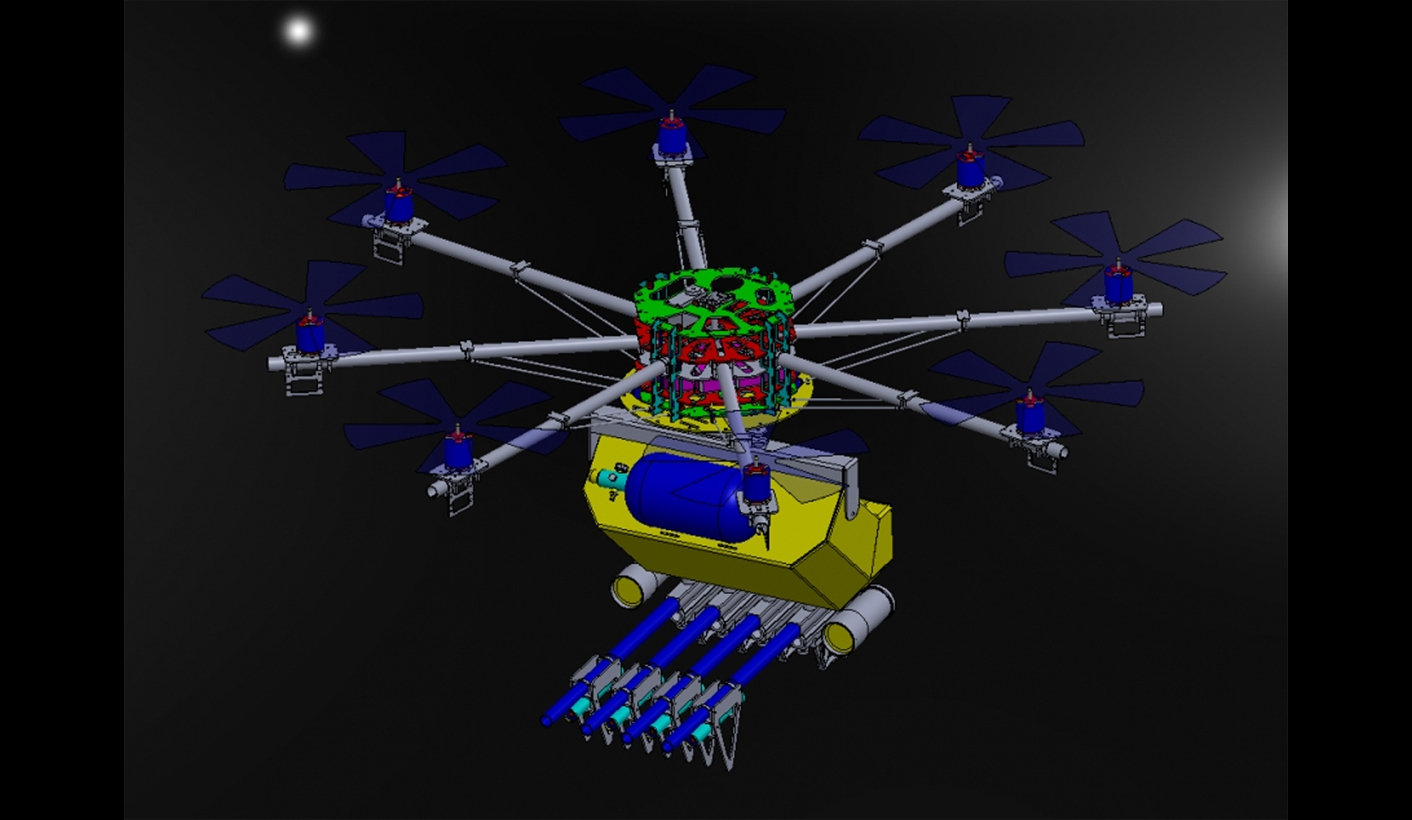 South Africa’s Age of the Drone is upon us. Last week, news broke of an innovation called the Skunk Riot Control Copter, developed by a South African company called Desert Wolf. It’s designed to shoot miners with pepper spray balls at the rate of 80-per-second. Our labour relations could use work, but this seems a bit extreme. It’s time to start thinking long and hard about the local use of Unmanned Aviation Systems, before things get too peppery. By RICHARD POPLAK.

The era of the drone began for me with a rhinoceros. Or, rather, lots of rhinoceroses—dead ones, rotting slowly in the African bush, their horns whisked off to parts unknown. For a certain segment of the population, there is no greater sign of human savagery than the sad corpses of those slaughtered creatures. Rhino were once as thick on the ground as rats, but now find themselves in a double-bind: they are slow and sedentary and thus easy to shoot, while their power is manifest in horns said to contain medicinal properties that, consumed under the right conditions, can result in a fabulous erection.

The wild, or what passes for the wild these days, is nearly impossible to police. The Kruger National Park is the size of Israel, and short of walling the area off from the rest of the world and manning checkpoints at every point of entry, Israel has nothing to teach SANParks. Or, rather, Israel has one thing to teach—militarise the skies, and turn the Earth into a grid minutely observed from the relative luxury of an office cubicle. Which is perhaps why two years ago I received a call from an acquaintance regarding a programme that would protect South Africa’s dwindling rhinos from death, with death.

The proposed rhino drones would not be armed with missiles or lasers, but high-def infrared cameras. They would fly observational sorties 24/7 over poaching zones and transmit any suspicious activity to a highly mobile ground force equipped with the mod-cons of the trade: night vision goggles, high-powered snipers’ rifles, body armour, Navy Seals beards. The poachers would hunt rhinos, and the drones would hunt poachers. Unmanned aircraft would become just another species in South Africa’s bustling avian ecosystem; perhaps birders would one day excitedly exclaim Look! A predator drone! and produce a careful tick under dronus maximus predatorius, or some other designation.

The story eventually came to nothing, but I was instinctively troubled by it. I’d rather poachers didn’t shoot rhinoceroses, but I also happen to believe that poaching’s root causes don’t lie in the demand for rhino horn so much as the poachers’ socio-economic circumstances. No one who enjoys even a minimum level of comfort would risk slinking out into the wild with an AK-47, facing terrors unknown, regardless of how much money is on offer. Yes, there will always be professional poachers, and yes, our parks will always need protection. But instituting death from above—providing our government with powers that traditionally belonged to the gods, and later to God—seems like a form of suicide. If we can’t trust the government to redress the age-old unfairness that rings our game parks like the remnants of dirty bathwater, how the hell are we supposed to trust them with the tools of the surveillance state?

There are, of course, many benign uses for drones, which are more properly termed Unmanned Aircraft Systems, or UAS. They can be employed to survey geological sites, or to dump water on forest fires, or to look for lost kittens in the Drakensberg. But they are enormously powerful tools that can fundamentally change how the government acquires and processes information. Armed, they are the almost perfect killing machines. Anonymous, silent, undetectable, they are the most sinister harbinger of the coming age of the machines, which is why even those of us who aren’t ranking members of the Taliban are so terrified of them.

For the South African Civil Aviation Authority (SACAA), the most obvious issue with these aircraft is that they’re aircraft—no one wants an SAA Airbus 340-600 landing upside down in Sandton because some asshole put a UAV tail on his errant wife. The current legislation does not provide for the certification, registration or operation of UAVs, which means that the footage of the Oscar Pistorius trial opening ceremony—shot from a drone with a Go-Pro—was illegal, and subject to a R50,000 fine. But the SACAAs Director Poppy Khoza is in something of a rush to push legislation through. Said Khoza recently: “We are […] cognizant of the urgent need and demand for UAS usage for commercial and many other reasons. Hence, the SACAA has allocated the necessary resources to the UAS programme to ensure a speedy integration of drones into the South Africa airspace.”

It’s the “many other reasons” that should make South Africans uncomfortable. It’s not just that a drunk child can saunter into a hobby shop and for next to nothing purchase and equip a drone that would rank alongside any multi-billion-dollar Cold War-era surveillance programme for efficacy. It’s that the legislation would do zip to protect South Africans from the government using these machines against them. And they will be used, if they aren’t being used already.

Which brings us to a company called Desert Wolf, pride of Tshwane, and their latest innovation.

Technology, aviation and weapons’ companies have been making and selling drones and their accessories for at least a decade. But no product comes quite as close in vileness to the Skunk Riot Control Copter, created by local heroes Desert Wolf. South Africans are an unhinged bunch, and the development and marketing of such a weapon so soon after the Marikana massacre could be either gross insensitivity or superb capitalism but is, in fact, both. Why would a government that exhibited no hesitation in killing 34 of its citizens not buy something that has four high-capacity gun barrels, capable of shooting up to 4,000 paintballs, pepper spray balls and solid plastic balls at rates of up to 80 balls per second, along with blinding lasers, loud hailers, and an iPod dock for the playing of awesome tunes? (I’m kidding about the last item. I think.)

According to the Desert Wolf website, the Skunk Riot Control Copter was developed with Marikana in mind. “Our aim is to assist in preventing another Marikana; we were there and it should never happen again.” (They were there????) According to the company’s Managing Director, Hennie Kieser, Desert Wolf has already sold a Copter to “an international mining house”. If said mining house plans to operate their new toy in South Africa, they would be breaking the law. But in this country, mining houses operate in collusion with the government, and have powerful men working as their houseboys. They exist in a sub-legal netherworld as deep and dank as their mineshafts, their directors and shareholders and boards immune to prosecution. Bringing them—or anyone—to justice following a bout of Skunk Riot Control Coptering would be impossible. (See: Marikana).

One doesn’t want to be alarmist about these things, but Holy Fuck! South Africans need to insist on enlightened legislation regarding UAVs from the SACAA. While making sure the new laws don’t cripple reasonable commercial usage, we need assurances that weaponised drones will never be used against the citizens of this country. If that means we can’t zap poachers with sidewinder missiles while they take aim at a rhino, so be it. The dangers of putting such toys in the hands of government and their hench-companies listed in faraway countries—countries with strict UAV legislation, BTW—is too great. To survive, rhinos must develop the ability to cut and run. To survive, we must limit our ability to fly. We are not gods, or God, but men and women, and our toys will kill us if we allow them to. DM