Homophobic Namibian fighters: What the EFF? 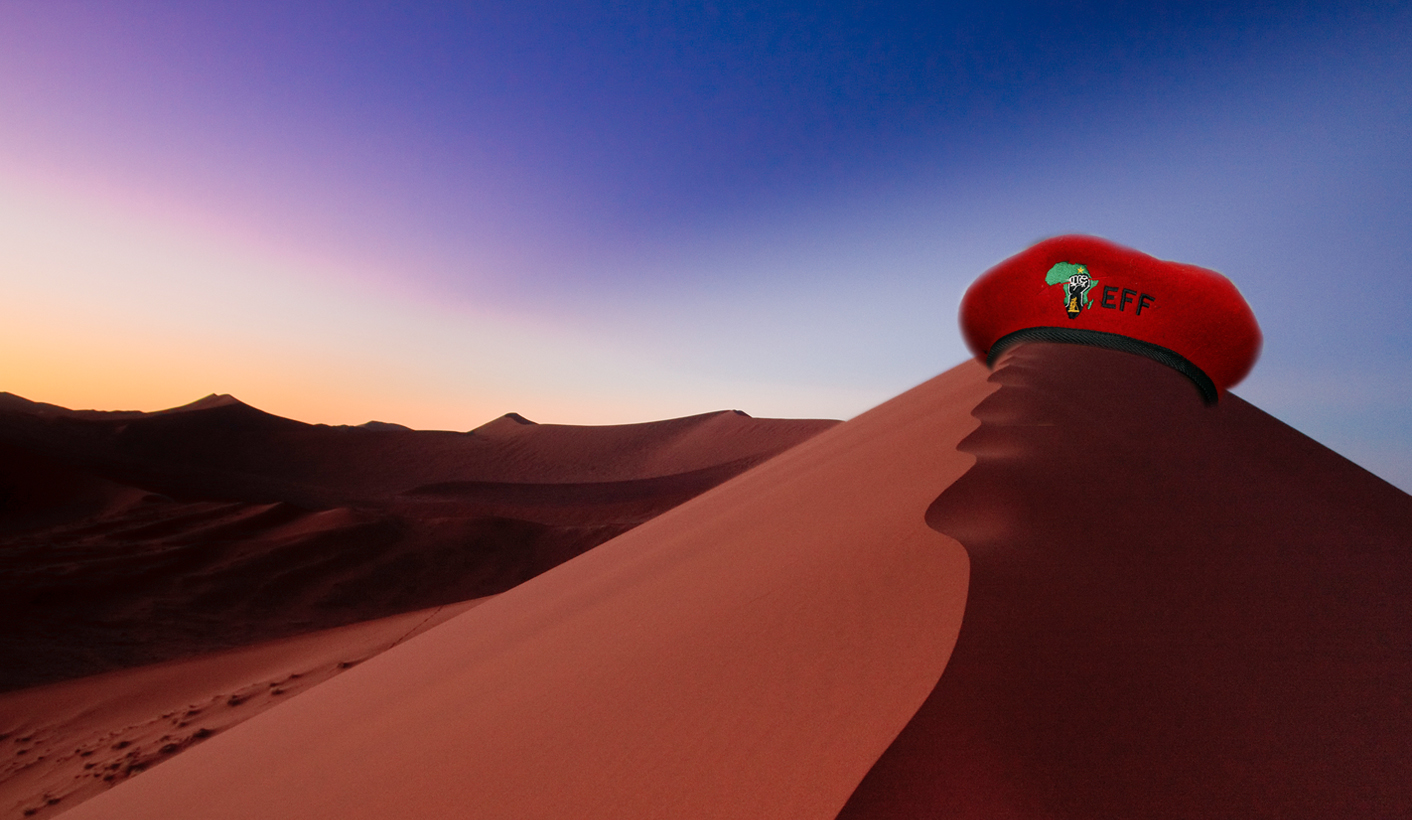 It has been widely reported that a Namibian version of the Economic Freedom Fighters has been established. Despite denials of official links, they look like the South African fighters: same red overalls, same red berets, exact same logo. They also talk like the South African fighters: same rhetoric about emancipation of the working class and the nationalisation of mineral resources. But there’s one notable difference. The Namibian gang hate gays. The South Africans claim to love them. So why aren’t they distancing themselves from their homophobic doppelgangers? By REBECCA DAVIS.

It was on Monday that a new political force hit Namibia. At Hoseo Kutako International Airport in Windhoek, the birth of the Namibian Economic Freedom Fighters was announced. Self-styled Commander-in-Chief Epafras Mukwiilongo and sidekick Kalimbo Iipumbu did the announcing, to about 25 people who were reportedly handed NEFF T-shirts and berets.

A press release circulated in advance of the launch described the new party as “radical and revolutionary”, and its emergence a “dramatic development”. Its political inclinations are radical left, anti-capitalist and anti-imperialist, according to Mukwiilongo.

Some of NEFF’s reported rhetoric sounds deeply familiar to anyone who’s been following the rise of the EFF in South Africa. They want to see the nationalisation of Namibia’s mineral resources – “We are a very rich country that can take care of itself if the government ensures industrialisation and processing of our minerals in Namibia,” Mukwiilongo told reporters. They object to “foreigners” benefiting from the Namibian economy. They say the ruling Swapo party is in bed with capital.

In a telephonic interview with the Mail & Guardian on Wednesday, Iipumbu confirmed that they had travelled to South Africa to meet Malema for an “information meeting”.

The Namibian newspaper, meanwhile, went so far as to quote a passenger on the same flight as Iipumbu and Mukwiilongo as saying that she saw Malema at OR Tambo International Airport in Johannesburg before their flight left. The implication was clearly that Malema was seeing the two fighters off.

The big deal is that the NEFF, which aims to contest Namibia’s November elections, is not just running on a platform of hating The Man. They also hate homosexuals. Like, a lot.

“Today, the imperialists are influencing our nation through homosexual practices,” Mukwiilongo told journalists. “The NEFF is committed to uniting all Namibians to root out this evil practice.” He also announced that he had been in Uganda recently, where he had succeeded in raising funds from “international anti-homosexual organisations”.

Homosexuality is already illegal in Namibia, in case you’re wondering. The country’s government indicated earlier this year that it would also not allow Ugandan gays fleeing persecution to apply for refugee status in Namibia.

When the NEFF says it wants to “root out this evil practice”, then, it clearly means that the party would like to go beyond merely criminalising sodomy. By contrast, their “sister” organisation, the EFF, claims to quite literally love gays. All of them.

“We love all the gay people in South Africa and the world,” Malema told a crowd in Polokwane last November.

In January this year, the EFF fleshed out their position. “The EFF is against the oppression of anyone based on their gender, gender expression, or sexual orientation, meaning that we are against patriarchs, sexism, and homophobia in all of its manifestations,” a statement railing against Uganda’s anti-gay bill read.

“Criminalisation of same-sex love is a relic from Western colonisation,” the same laudable statement continued. “Why are African countries clinging to these antiquated laws against same-sex love? Why do African lawmakers seek to further strengthen a discriminatory law in a democracy? We make a plea to African countries to uphold the human rights and dignity of lesbian, gay, bisexual, bisexual, transgender and intersex people.”

An April poll by Ipsos for the Sunday Times found that this gay tolerance carried through to the party’s voters, too. More supporters of EFF (35%) said that same-sex couples should have the right to marry than supporters of any other political party. (Only 31% of DA supporters and 29% of ANC supporters were in favour of gay marriage, the same poll found.)

Yet EFF’s Namibian counterparts launch their party with some serious gay-bashing vibes. What gives?

On Twitter, Julius Malema seemingly approvingly retweeted a tweet on Tuesday which read: “Julius Malema inspires Namibians to start [their] own Economic Freedom Fighters”, with a link to a news article in which the homophobic stance of the NEFF was made clear.

When challenged on Thursday morning as to why the EFF would support such a homophobic party despite their own pro-equality stance, Malema tweeted in response: “We are not part of such things”.

Vague, and confusing, given all the reporting about the EFF’s collaboration with the NEFF, so the Daily Maverick called up NEFF Commander-in-Chief Epafras Mukwiilongo. Over a crackly phone line from Windhoek on Thursday afternoon, he told us that any suggestion that the two organisations were affiliated was “a brutal lie”.

Repeated attempts to reach EFF spokesperson Mbuyiseni Ndlozi for official comment on Thursday failed. All attempts by other media outlets earlier in the week to get Ndlozi to clarify the nature of the ties between the two parties were seemingly also unsuccessful.

EFF MP Andile Mngxitama refused the opportunity to definitively distance the party from the NEFF, tweeting in response to a query that “NEFF must be engaged, not condemned”. He also suggested that “the enemies of Africa are busy using the ruses of anti-homophobia to re-colonise Africa”.

Malema may be denying any formal collaboration with the NEFF, but his flirtation with Namibia has been well documented and stretches back a few years. A rhapsodic 2013 article in the Namibian Sun quoted University of Namibia politics lecturer Hoze Riruako: “[Malema] has opened the doors and a window of opportunity for other African youth involved in politics, in Africa and Namibia, to challenge the mother parties.”

Malema is known to have had supporters among the Swapo Youth League in particular, which has allegedly caused unhappiness from the parent body because Swapo is aligned to the ANC.  In 2012 Swapo-affiliated individuals invited Malema to deliver a memorial lecture, but he was later reportedly banned from giving the talk by Swapo leaders who feared he would use the platform to criticise President Jacob Zuma, causing a possible diplomatic row. (Malema denied ever being invited.)

Last month, Malema said he no longer had any relationship with either Swapo or its youth league, but he delivered a message of solidarity to aspirant Namibian revolutionaries. “I would advise Namibian youth to overcome their fears,” he told the Namibian Sun. “We are aware that our struggle for economic freedom is not only for South Africa alone.” DM