Seven years for journalists doing their job: What do these verdicts tell us about the new Egypt? 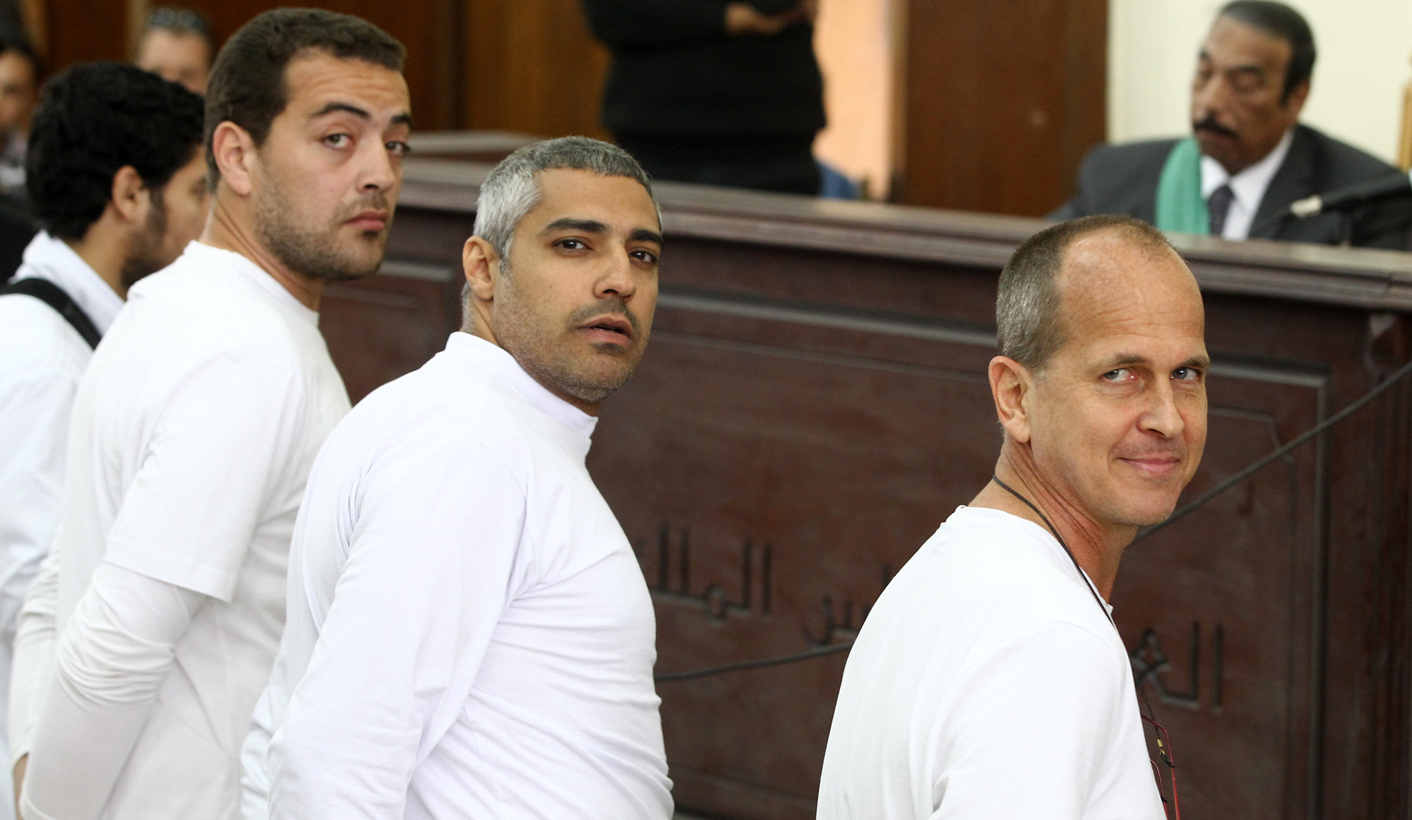 Three Al Jazeera journalists have been sentenced to a long time behind bars after a sham trial in Egypt found them guilty of aiding a terrorist group. While the verdicts are shameful, they are also instructive, offering an unprecedented glimpse into the heart of this new, untested Egyptian regime. By SIMON ALLISON.

On Monday, six months after their arrest and a shambolic trial later, three Al Jazeera journalists were sentenced to seven years in an Egyptian prison. Peter Greste, the Australian foreign correspondent; Mohamed Fahmy, the Canadian-Egyptian acting Cairo bureau chief; and Baher Mohamed, an Egyptian producer, were found guilty of aiding and abetting a terrorist organisation, and damaging Egypt’s national interest. Baher Mohamed was given three extra years on a separate charge involving possession of ammunition.

Their real crime? To try to report on a protest march organised by the Muslim Brotherhood, an illegal organisation in post-revolutionary Egypt (never mind that a Muslim Brotherhood candidate won the first-ever free and fair democratic elections in 2012). “This is a devastating verdict for the men and their families, and a dark day for media freedom in Egypt, when journalists are being locked up and branded criminals or ‘terrorists’ simply for doing their job,” said Philip Luther, Director of the Middle East and North Africa at Amnesty International.

Employees of Al Jazeera, the Qatar-based news channel, were devastated by the decision. They had been expecting an acquittal (and who can blame them? The prosecution had so little evidence that they were reduced to showing photographs from Greste’s family holidays, and playing clips from unrelated stories).

“Today three colleagues and friends were sentenced, and will continue behind bars for doing a brilliant job of being great journalists. ‘Guilty’ of covering stories with great skill and integrity. ‘Guilty’ of defending people’s right to know what is going on in their world,” said Al Jazeera English managing director Al Anstey. “There is no justification whatsoever in the detention of our three colleagues for even one minute. To have detained them for 177 days is an outrage. To have sentenced them defies logic, sense, and any semblance of justice.”

The unexpected verdicts do, however, reveal much about the still new and relatively untested Egyptian government of President Abdel Fatah el-Sisi.

First, and perhaps most significantly, is that it underlines once again that there is no independent judiciary in Egypt. The courts and their judges are political animals, and take their cues from the executive. It is telling that while the Al Jazeera trio got 7-10 years for their alleged offences, former Egyptian President Hosni Mubarak got a paltry three years for the embezzlement of public funds. He has not been called to account for any of the human rights abuses committed during his long reign.

Second, it shows that freedom of expression is an entirely abstract concept in modern Egypt. Proper journalism has simply become too dangerous. More than 65 journalists have been detained since the military seized power in July 2013. While many of these have since been released, at least 16 are still in prison. It’s not just journalists, either. Blogger Alaa Abd el-Fattah, considered by many to be the defining voice of Egypt’s 2011 revolution, was sentenced along with 24 other defendants to 15 years in jail on charges of attacking a police officer and illegally protesting. Meanwhile, the satirist Bassem Youssef – Egypt’s answer to John Stewart – has taken his show off air, saying that the “present climate in Egypt is not suitable for a political satire programme”.

Third, it shows exactly where Egypt’s international priorities lie – and it is bad news for western government who thought that Sisi might be more pliable than his Islamist predecessor. Australian leader Tony Abbott lobbied hard for Greste’s release, while US secretary of state John Kerry personally interceded with President Sisi. Both of them were ignored. For Kerry, the verdicts are “a humiliating, public slap in the face,” according to the Guardian. Also in trouble with the new regime is Qatar, which was an enthusiastic backer of the Muslim Brotherhood-supported government. Al Jazeera, as a wholly state-owned enterprise, is sometimes seen in the Arab world (not always accurately) as a Qatari mouthpiece; hence why Al Jazeera journalists were singled out.

On Monday, after the verdicts were issued, Kerry described them as chilling, and promised to raise the matter again with Egypt’s foreign minister. He will doubtless be chilled too by the US’s apparent lack of influence over the new administration, and may be tempted to reconsider the $1.3 billion given by the US to Egypt in annual military support.

For Greste, Fahmy and Mohammed, the next stage is to appeal the decision – and place their fate once again at in the hands of an Egyptian court. If this fails, then their only hope is for a presidential pardon. Given his tough record so far, however, President Sisi seems unlikely to show mercy. DM