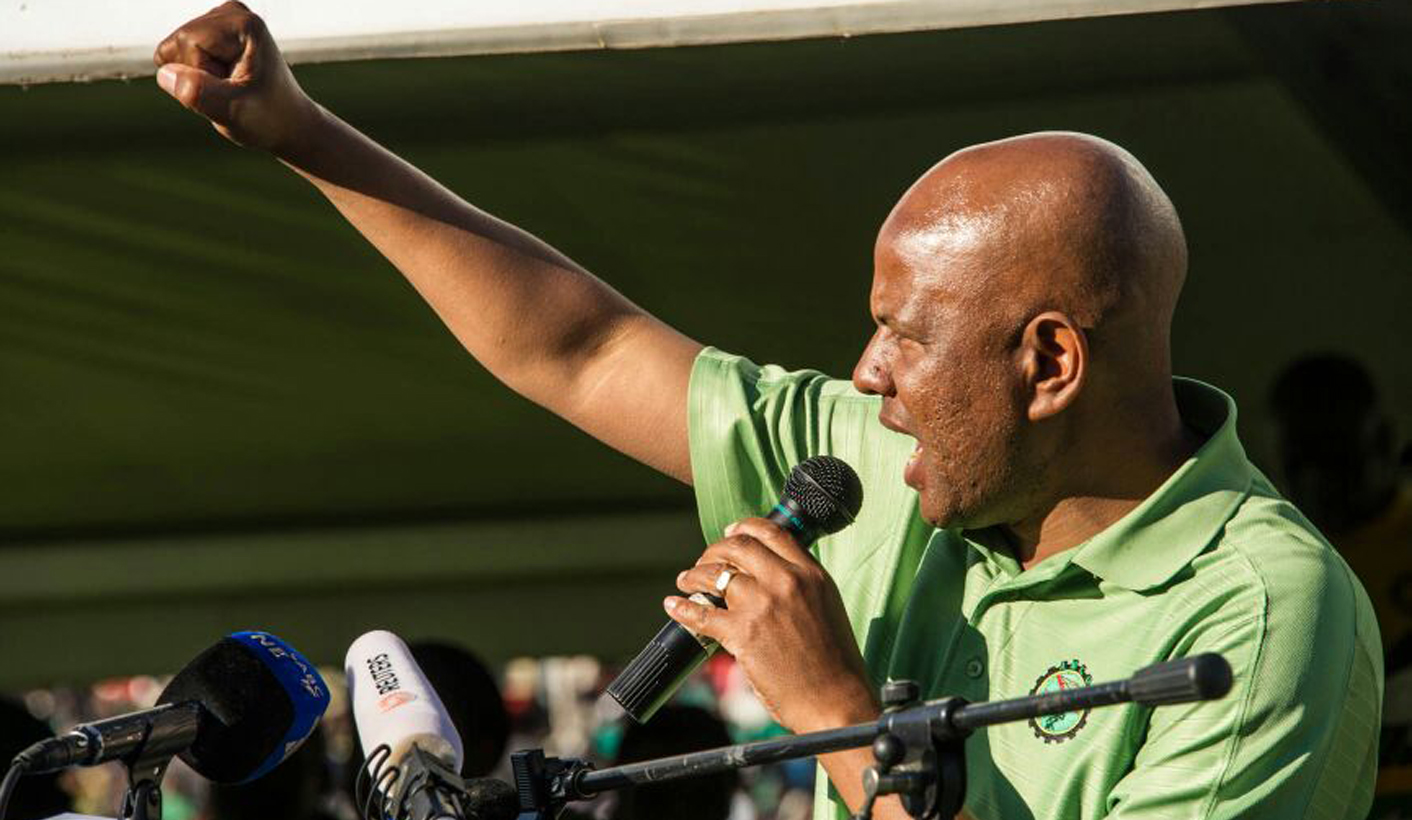 AMCU President Joseph Mathunjwa says the platinum strike is officially over. During the five-month strike at Lonmin, Impala and Amplats, the economy suffered, workers and their families went hungry and SA’s credit rating dipped. Union members say it was worth it. By BHEKI C. SIMELANE, THAPELO LEKGOWA & GREG NICOLSON.

Amplats miner Andy Matwa received a call from his family on Monday night. They heard he was going back to work and couldn’t contain their excitement. “No more starving for us and our families,” said Matwa, elated. After five months without a salary, the AMCU member will now start paying off what he has borrowed to survive. But for Matwa, it was worth it.

“Man, for me it was no longer about me and my colleagues, but also about all the mineworkers before and those that will come long after we are gone. We have levelled the pitch for everyone and I’m excited to have been part of such a historic struggle for better pay and that not even once had I betrayed my colleagues, not even under extreme financial strain. I can’t wait to return to work on Wednesday after so long,” said Matwa on Monday night.

One of over 70,000 AMCU members on strike since 23 January, his feelings were common among mineworkers on Monday as union leader Joseph Mathunjwa confirmed at a meeting in Rustenburg’s Royal Bafokeng Stadium that a deal had been reached and employees were due to go back to work this week.

The union met platinum producers individually last week to work out details of a deal generally agreed upon earlier in the month. While we’re still awaiting specifics, the agreement should see the two lowest paid categories of employees receiving annual increases of R1,000 per month in basic pay for two years, with R950 after that. The higher-paid categories of workers will get 8% increases for two years, then 7.5%. Pension fund contributions, overtime, holiday leave and shift allowances will increase at inflation. The living-out allowance would remain constant at 2013 levels, which, essentially, allows for the boost in the offer of the basic pay increase.

Thousands of AMCU members filled the stadium on Monday, urging Mathunjwa to sign the deal. Mineworkers who began celebrating on Sunday night said they had been buying tobacco and cheap food for months, but in anticipation of a deal being reached they were spending the last of what they had. “Now we are back to smoking cigarettes and no more buying expired food in tuck shops. We will now eat well inspected food that will not make us sick,” they said in Rustenburg.

The wage agreement will last for three years and Mathunjwa said Lonmin had agreed to reinstate the 236 essential services staff fired during the strike. In the next month, Amplats will assist struggling workers with food parcels, transport and help with financial advice for employees.

Mathunjwa, who during the strike has earned the nicknames Gwebi Indlala (End Poverty) and Pelepele (Chillies), claimed the deal was a victory for workers across the country. “The platinum sector will never be the same. What other unions have failed to do over many years, you have achieved in five months,” he told workers.

Amplats safety officer Madiba Bukhali said he was proud to be a part of the strike. “This day was always going to come. I’m just happy for all my younger colleagues who persevered in the face of immense financial suffering and extreme hunger, but they too can look back at this time and say they have done it. For they have been part of the history that has even claimed many of our colleagues [in the Marikana massacre].

“Everyone can look back at the time and feel great to have been part of the whole process. On Wednesday morning I’m going back to work in what I can describe as a huge relief to all of us. It’s been a gruelling five months, worthwhile but a big achievement for me and my colleagues,” Bukhali said over the phone on Monday.

Other workers said they had proved a point. “We have taught many people that mineworkers are not idiots like they thought. This is not the generation of our fathers. It is us now and we will not face the same hardships as our fathers. Working in the mine is going to be more fashionable; now everyone will want to work here,” said an AMCU member in Rustenburg who didn’t want to be named.

According to the platinum producers, AMCU raised new demands last week which they claimed were unaffordable. The length of the agreement was a point of contention and reports said the union wanted a R3,000 return-to-work payment and a moratorium on retrenchments. AMCU is holding a press conference on Tuesday to explain the agreement in detail. According to a website established by the producers, companies have lost R23.9 billion in revenue and employees R10.6 billion in wages.

Further progress towards an agreement has been made, the platinum companies announced in a joint statement on Monday, but speaking for the companies, Charmane Russell said they were waiting for AMCU’s formal response. Mathunjwa has said employees should be back at work by Wednesday, which will begin the process of getting the mines to be operational.

The turning point in the strike seems to have come after the brief intervention of new Mineral Resources Minister Ngoako Ramatlhodi, who brought the parties together after negotiations were deadlocked. He suggested the living-out allowance could be reduced to allow the basic wage to rise; government, meanwhile, would speed up the provision of decent housing in mining areas.

On Monday, the minister’s spokesperson Mahlodi Muofhe welcomed the agreement and said he hoped South Africa could now get back to work. The ministry is excited that its intervention helped get the parties to the table and contributed in some way towards an agreement, said Muofhe. The platinum strike was the key cause of the recent decline in GDP.

Ramatlhodi’s intervention was welcomed by both the union and the platinum producers, but left the ANC uncomfortable. Speaking to the SABC on Monday, Deputy President Cyril Ramaphosa said the state shouldn’t be directly involved in negotiations. In the future, government could seek legislative changes to break deadlocks in industrial disputes, Ramatlhodi has suggested.

While the platinum strike comes to an end, Johannesburg’s Labour Court on Monday upheld an order that prevents AMCU from striking in the gold sector. If the union embarks on industrial action at Sibanye, Harmony and AngloGold Ashanti, workers will not be protected from losing their jobs.

AMCU, which represents fewer than 20% of workers in the industry, argued it should not be bound by the 2013 collective agreement reached by the majority union, the National Union of Mineworkers (NUM), and UASA and Solidarity, at mines where it is dominant.

The union argued the majority principle, which gives a majority union the right to conclude labour agreements, was unconstitutional as it prevented the right to embark on industrial action. Further, it said individual mines rather than companies as a whole should be used to determine which union the employer bargains with. The employers, meanwhile, said allowing a minority union to strike could throw the industry into disarray. The Chamber of Mines’ Elize Strydom said on Monday the industry would continue to use centralised bargaining.

While gold producers may have dodged a bullet, platinum is reeling from the longest strike in South African history. Mathunjwa said the work wasn’t over and called on members to defend their union and their gains as the struggle continued. DM

Photographs by Thapelo Lekgowa from Monday’s AMCU gathering in Rustenburg.