Post-SONA Debate: The President Yawns Back 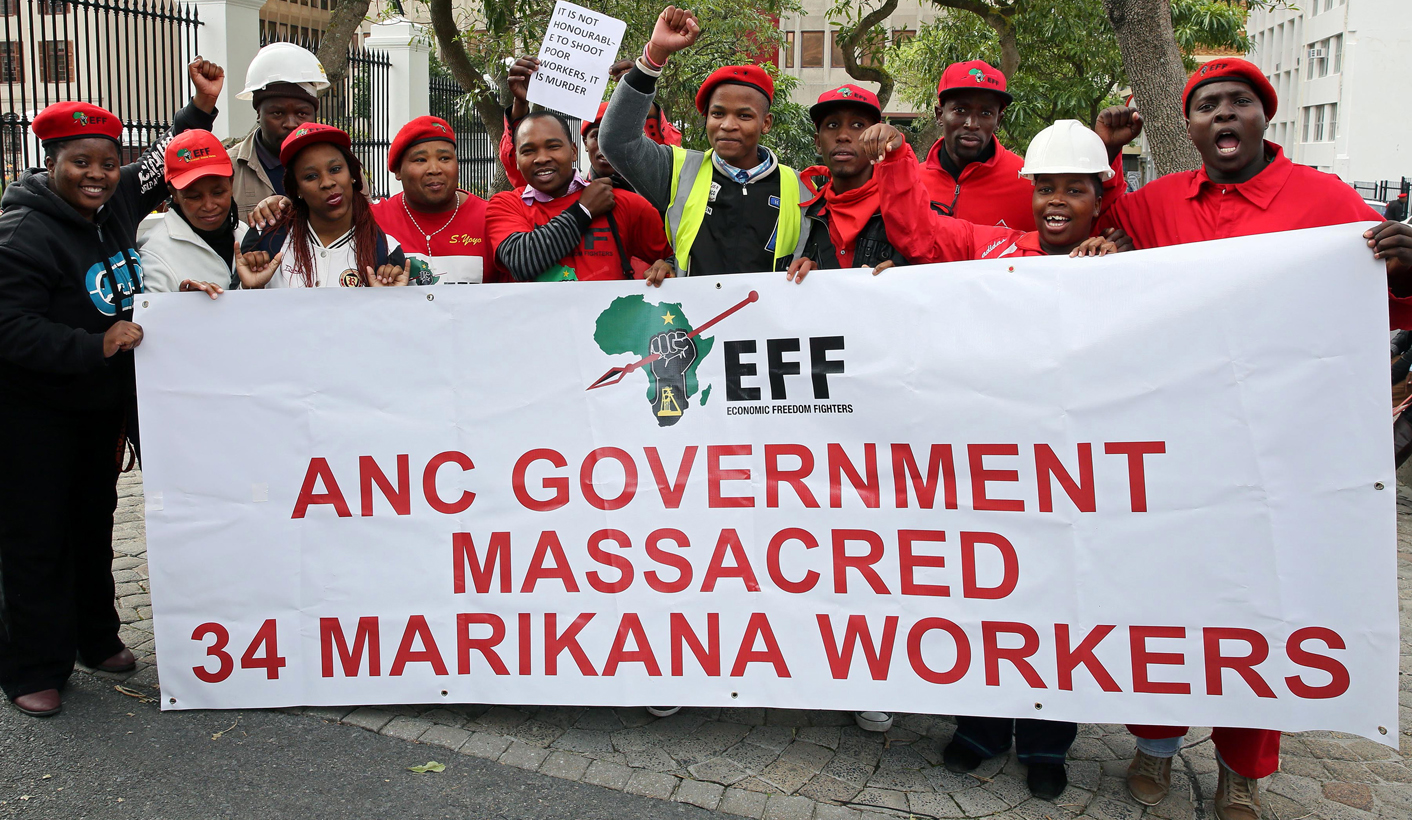 On Friday, President Jacob Zuma had a second bite at the State of the Nation cherry: the opportunity to respond to two days of highly acrimonious debate in the National Assembly. Did he come out fighting? Did he smoothly allay concerns? Did he smack down the bolshy parliamentary newcomers? No, no and no. What Zuma delivered was essentially a second, even drier, version of the State of the Nation Address – while EFF supporters took to the street outside parliament to call for his head. By REBECCA DAVIS.

Julius Malema and the EFF took up their seats in the National Assembly on Friday morning as if Thursday’s events had been a bad dream. As if Malema had not refused to withdraw his statement that the ANC government massacred the Marikana miners; as if chair Thandi Modise had not ordered him to leave the Assembly; as if Malema’s MPs had not followed him out, yelling “Murderers!” at those left behind.

Malema’s expulsion only applied to the remainder of Thursday’s parliamentary session, but that doesn’t necessarily mean he’s out of hot water. On Friday, Modise described the EFF’s behaviour as “disruptive and unacceptable”, and a contravention of parliament’s rules. Modise said that she would be consulting Hansard (the parliamentary record) and the debate recordings, and that the matter might have to be pursued under the Powers, Privileges and Immunities of Parliament Act.

If this is the case, Malema might be suspended, fined or required to apologise – though he was in no mood for any of the above on Friday. But Friday wasn’t supposed to be about Malema or the EFF, though they ended up stealing the show again due to President Zuma’s uninspired response to the post-SONA debate.

Zuma’s response followed two days of fiery exchanges in the National Assembly, but there was no fire evident when the president mounted the podium to address his critics. Zuma summarized the contributions of various ANC Ministers: South Africa needs radical socio-economic transformation, again without clarifying what that means; the priorities of the National Development Plan will be fast-tracked; the delivery of public services will be improved. To this end, officials will pay unannounced visits to Home Affairs offices, police stations and hospitals.

Economic growth was again stressed as vital to the country’s future, with Zuma reiterating the growth target of 5% by 2019. The president again urged the private sector to do their bit through making internships and apprenticeships available to the country’s youth.

Zuma briefly dealt with a number of concerns raised by opposition MPs. The DA’s Stevens Mokgalapa had queried the claim that the government opens one school per week in the Eastern Cape. Zuma stuck to his guns on this assertion, saying that 40 schools had been completed by November 2013. Despite Zuma’s certainty, a report by Africa Check says the claim is misleading, because in some cases schools were “opened” months after they were operational, or long before construction was actually completed.

In response to several MPs, Zuma acknowledged that poor Maths and Science results were a problem in South Africa’s education system, and said the Department of Education was working to ensure that Maths would be offered as a subject in all Grade 12 schools and that all posts for Maths and Science teachers would be filled “as a matter of urgency”.

The ACDP’s Kenneth Meshoe had suggested that the government was throwing money at municipalities without offering concrete solutions to management problems. Zuma said that more “tangible technical support” will be provided to municipalities, including assistance with budget-preparation and revenue collection strategies. This would ensure that all municipalities are “able to provide simple services such as providing lights and water, cutting grass, ensure functioning street and traffic lights, consistent refuse removal and credible billing for services”.

Describing the “land question” as “emotive”, Zuma said what was necessary was “cooperation among those who must obtain land and those who must release land”, without elaborating further.

The President also thinks our sporting performance as a nation needs work. Bafana Bafana, consider yourselves lightly rebuked: “It cannot be acceptable that we should be missing from the Soccer World Cup,” Zuma said. He also called for all South Africans to support the development of the national Netball Premier League.

While Zuma was waxing lyrical about netball, there were EFF supporters outside parliament toyi-toying with signs that literally read: “Zuma must die”. It seemed that Zuma might actually conclude his speech without a single mention of Malema or his party – which may have been an effectively cutting gesture of disdain. But right at the end of his response, he finally got round to the matter, without ever using the words “EFF” or “Malema”.

Zuma said he would be “missing an important point” if he did not remind parliamentarians that their duty in the House was to enrich and further the discussion with their contributions. Parliamentary opposition should aim to be constructive, he said; viewers could tell which politicians really had the best interests of South Africa at heart, and which were bent on reducing the debate to individual personalities. He concluded with an appeal to the gathered MPs to move South Africa forward.

It was a dignified smackdown, if you can even call it that. In a press conference convened after Zuma’s address, the EFF leadership showed no signs of feeling remotely chastened.

Malema professed himself satisfied with the stir the EFF has already made in just a few days of parliamentary proceedings. He indicated that the party’s MPs had no intention of being bound by parliamentary rules, because they are enforced by ANC figures like NCOP Chair Thandi Modise who are both “biased” and “crooks”.

“No one, not Thandi Modise, not [Speaker] Baleka Mbete, not even Zuma, can tell us how to conduct our struggle,” Malema said. “I’m not here for the rules of parliament. What rules? There are no rules in the revolution.”

Malema said that it seemed to them that the definition of “unparliamentary” language was to say things which were uncomplimentary to the ANC, whereas parliament should rightly be a “festival of ideas”.

“We don’t think there was anything unparliamentary about what we said or did,” Malema said. If parliament attempted to impose any disciplinary action on the party, Malema indicated that they were prepared to take the matter to court, because they would respect the rulings of judges rather than ANC deployees.

Malema also said that the EFF had objected to the ANC’s description of DA parliamentary leader Mmusi Maimane as a “hired commodity” because “we stand up for black people everywhere”. The Daily Maverick asked Malema how his protectiveness towards Maimane squared with the fact that he had been among the first to call former DA parliamentary leader Lindiwe Mazibuko a “tea-girl”.

“Mmusi Maimane is a tea-boy,” Malema responded. “They are all working for Madam. But they must all be defended.”

As is his way, Malema also mixed some stirring feminist statements with some casual sexism of his own. Dealing with reports that SABC COO Hlaudi Motsoeneng had been given a woman as a gift by Venda leaders, Malema expressed shock and outrage: “Mr Hlaudi has just received a gift in the form of a human being,” he said, asking where the ANC Women’s League were at this time. “How can Hlaudi just decide to become Boko Haram?”

It was a much-needed public criticism of an issue that has been hitherto shrouded in silence from public figures. Yet minutes later Malema referred to the ANC’s Lindiwe Sisulu as “the Barbie doll”.

Asked for his opinion on Zuma’s health, Malema said he did not want to “entertain” the matter, and called on those close to Zuma to instruct him to quit. “We are beginning to get used to Cyril [Deputy President Ramaphosa], because during [Zuma’s] sick leave he was everywhere,” he said. “No-one misses [Zuma’s] input. There has never been a moment when they say, ‘Hey, we are stuck here because we need the president’s input’.”

This first parliamentary week may have been all fun and games, but the real work of parliament now begins, in the sitting of parliamentary committees – where all the serious stuff actually gets done. Malema said that the EFF was eagerly anticipating the role they would play on the committees. But he was adamant that the fighters won’t be sitting back.

“More fire is coming,” Malema said. “We are not here to play.” DM

Photo: Economic Freedom Fighters (EFF) demonstrate outside Parliament in Cape Town, Friday, 20 June 2014. EFF leader Julius Malema was asked to leave the National Assembly after refusing to withdraw controversial comments in which he accused the ANC of murdering mineworkers in Marikana in August 2012. Picture: Nardus Engelbrecht/SAPA