Disorder in the House: The Mmusi and Juju show has arrived 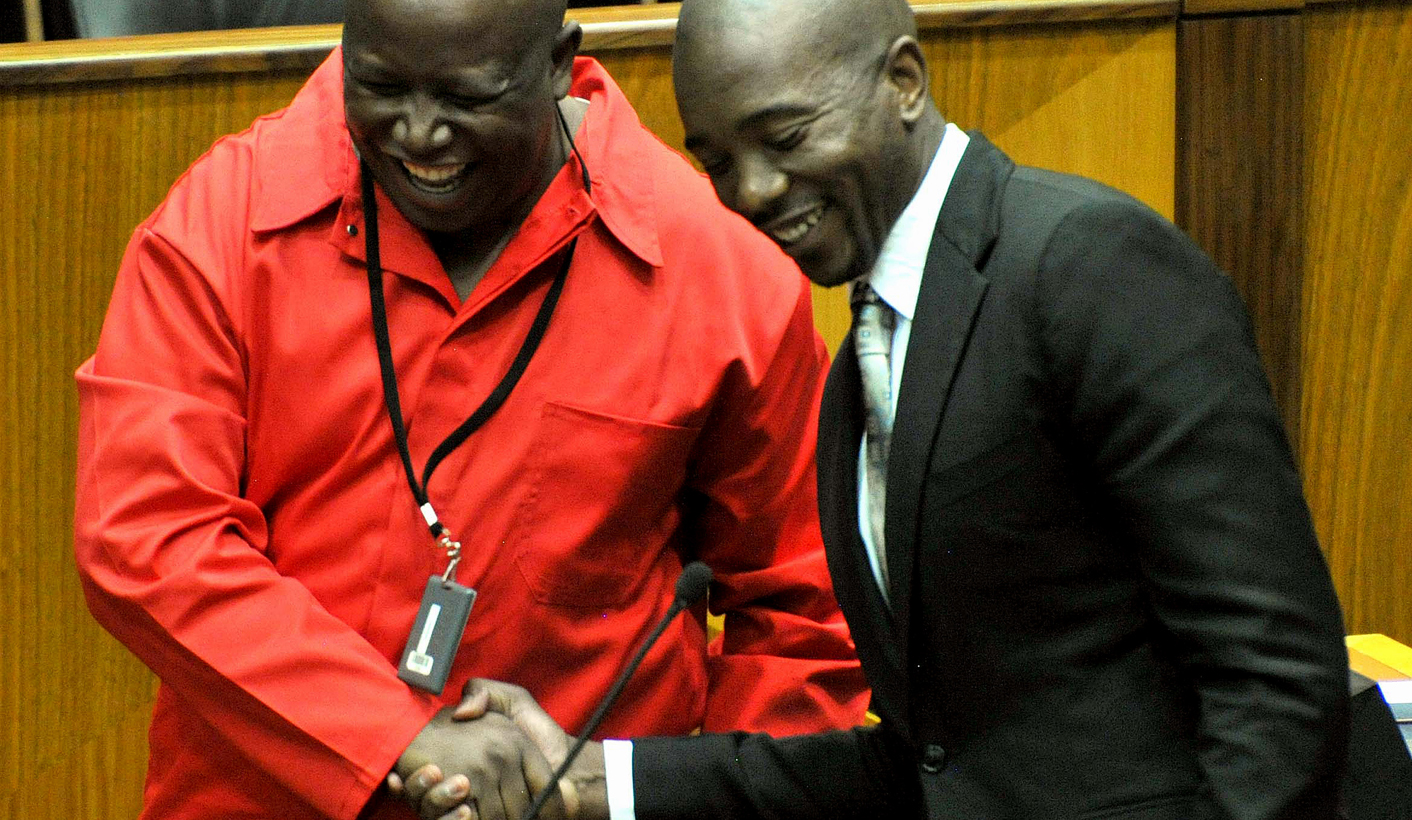 For the ANC, Wednesday’s debate on President Jacob Zuma’s State of the Nation Address was meant to be about rallying around Number One and defending the announcements he made the night before. But it was always going to be an uphill battle knowing the new red army and the rejigged blue team were out to stage The Roast of Jacob Zuma. Debutants Mmusi Maimane and Julius Malema definitely announced themselves, and Malema, as anticipated, brought the House down. The ANC was forced to tell the enfant terrible and “pin-up boy of the suburbs” who’s boss. By RANJENI MUNUSAMY and GREG NICOLSON.

In his maiden speech to Parliament, Economic Freedom Fighters (EFF) leader Julius Malema did what he came to do: make an impression, show that he is not prepared to play by the rules and give President Zuma a hard time. Malema certainly knows what buttons to press to rile the ANC.

Dressed in the EFF’s trademark red overalls, Malema started off his address saying he thought it would be difficult to carry out his mandate “against the party which taught me everything I know today about politics”. However, on seeing former the former minister Marthinus van Schalkwyk and Deputy President Cyril Ramaphosa in the ANC benches, he realised “we are not opposing the ANC we joined”.

But most of Malema’s venom was directed at the president. “Your speech yesterday was uninspiring and lacked the central theme, Mr President. No one will remember what you said last night, except that we should clean on Mandela Day, which was the only emphasis you made and maybe because you thought it was the simplest subject you had to deal with in the whole speech last night.”

Malema also went for the jugular on the issue of radical economic transformation – knowing the ANC is battling to explain what this means and how it translates practically.

“Mr President, you tried to speak about radical socio-economic changes in your speech last night but nothing you said was radical; instead we heard a repetition of what has been said before… You and your party should stop playing with semantics, especially when it relates to radical economic agenda, because you lack courage and you have sold out the revolution.”

Malema went on: “You don’t have what it takes to lead the struggle for economic emancipation of the black majority, particularly Africans. You are extremely scared of white people, particularly white monopoly capital.”

As expected, Malema, who prides himself on militant populism, ran into trouble in terms of the parliamentary rules and had to be repeatedly warned by Chairperson of the National Council of Provinces, Thandi Modise, who was chairing the debate, to play nicely. At one stage Malema sailed close to the wind, challenging Modise’s ruling and saying that he would refuse to be told what he could say. He eventually let up to continue his speech.

Democratic Alliance (DA) parliamentary leader Mmusi Maimane, who also made his debut address on Wednesday, seemed to make a concerted effort to be gracious and gentlemanly, even saying to Zuma, “It is good to have you back in good health.” This is a marked difference from his predecessor Lindiwe Mazibuko, who according to the DA’s internal research, was perceived as being “too aggressive”.

Maimane’s brief, however, was also to tear into Zuma’s speech. “I am sad to say that the President’s address yesterday evening was an opportunity missed. It was the speech of a leader out of touch with the plight of the people he has the privilege to serve.”

He said the extent of the unemployment crisis received no mention in the president’s address. “How can he say we are a nation at work, when millions of people are, in fact, out of work?” Maimane also said there was “no plan whatsoever to immediately tackle the crisis of electricity supply”.

Speaking on corruption, Maimane raised the Nkandla security upgrades, for which Mazibuko was the flag bearer, calling for the Parliamentary ad hoc committee to be re-established. “South Africa is very well versed in scandal after scandal that is attributed to our most prominent citizen, the Honourable President… Until the Honourable President fully explains himself on the undue benefit from state funds, to his personal private property, amounting to millions of rands – South Africa cannot trust in his word.”

If Maimane and Malema tried to put the ANC on the ropes during the debate, Human Settlements Minister Lindiwe Sisulu provided a vicious defence, drawing more point of orders than even Malema.

“The opposition’s general election strategy was based on innuendo, malignant attacks, rumour mongering and outright slander against the people’s organisation,” said Sisulu. She called Maimane a black “commodity” for “the madam” and wondered how he could come from Soweto, “a revolutionary place”. DA-governed areas have the worst racial inequalities, she claimed.

Sisulu also had a lecture for the EFF leader: “Honourable Malema, welcome to this House, where [having] manners is a very important part of our conduct and where your tongue is governed by the rules of Parliament. It will be a tough place for you.” Hitting back at Malema’s point that Zuma’s speech was less than memorable, Sisulu said: “The reason why you do not remember the president’s speech is because it clearly flew far above your head and your ability to grasp what was said.”

United Democratic Movement leader Bantu Holomisa was not spared Sisulu’s lashing, despite his moderate comments to the House. She accused him of “running and begging miners in Marikana, ‘hey, remember me? I’m that dictator who freed you from Matanzima, vote for me’. It paid off, because he is back in Parliament, having learned nothing, because he is repeating himself over and over again, Sisulu raged.

In his speech, Holomisa had suggested a sort of economic Codesa to discuss the developmental agenda and also called for a wide-ranging commission into issues in the mining industry.

Zuma looked quite bemused during the debate, bursting into laughter with the rest of the House when Maimane took an unexpected dig at the EFF, saying “wearing a beret does not make you a revolutionary”. While Zuma is used to being hauled over the coals, Ramaphosa had a range of bewildered expressions during the debate.

The first day of the fifth Parliament was certainly worth the ticket price. With numerous points of order, pot-shots and low blows, the line-up of speakers brought new energy and dynamism to Parliament. By the end of the day, tempers were fraying and the EFFs Andile Mngxitama had the House in a ruckus when he referred to Malema as “commander-in-chief”. This was challenged by the ANC, who said that Zuma was the only recognised commander-in-chief.

The boisterous start to South Africa’s fifth Parliament might fizzle out as the rookies settle in, or this might be a term of constant head-butting.

Zuma will respond to the debate on Friday and it will be interesting to see if he acknowledges the new antagonists. Or it could be left to the ANC henchmen to hit back when the debate continues on Thursday.

One thing’s for sure, though: the Young Turks have definitely arrived. DM