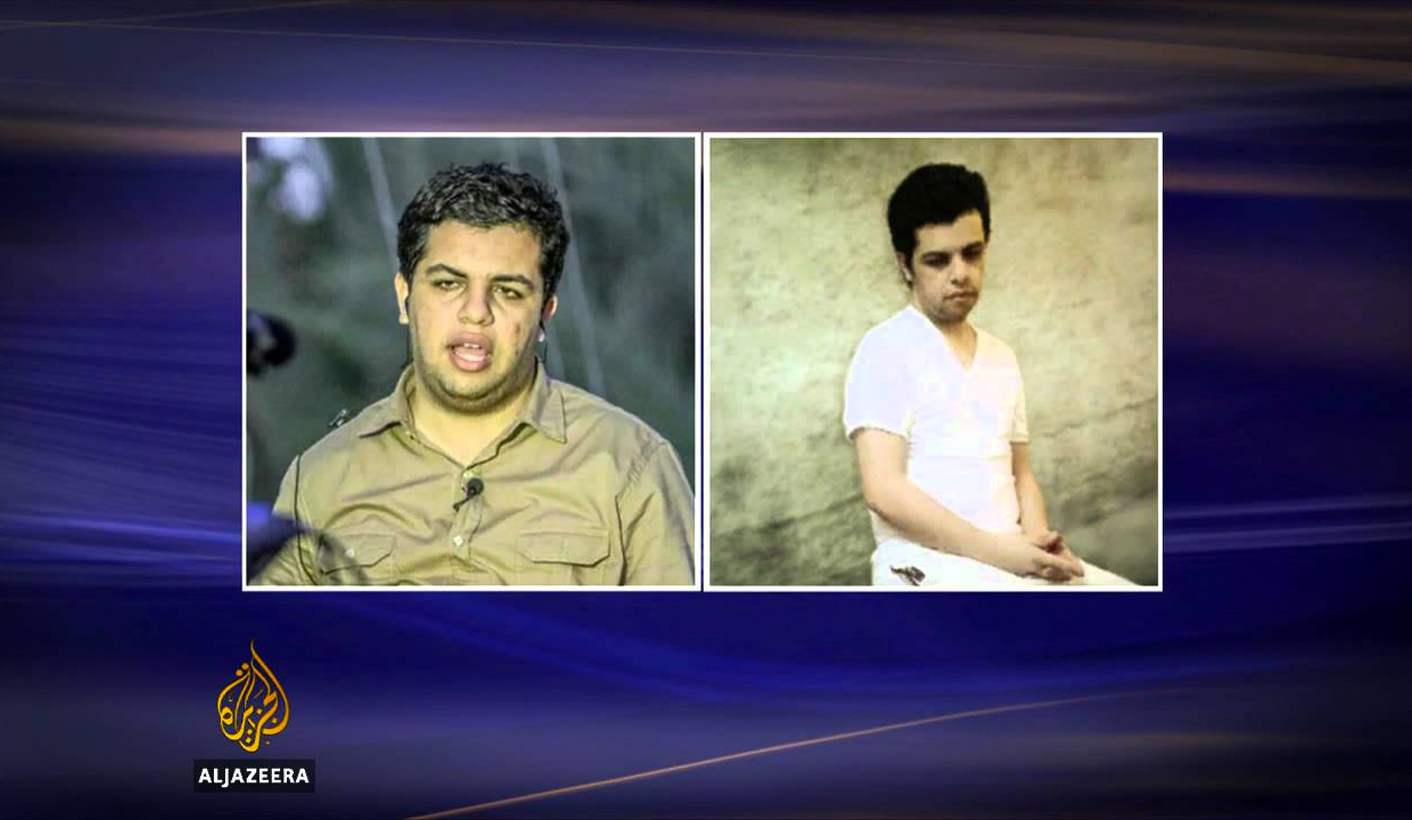 After 147 days on a hunger strike, a detained Al Jazeera journalist has been released by Egyptian authorities on medical grounds. In 304 days in prison, he was not charged with a single crime. While his family celebrate, with good reason, for journalists in Egypt his release is the exception rather than the rule in a country that has given up any pretence of press freedom. By SIMON ALLISON.

Finally, some good news coming out of Egypt. In an unexpected – but long overdue – show of mercy, Egypt’s prosecutor-general has ordered the release of Al Jazeera journalist Abdullah Elshamy and 14 other prisoners on medical grounds.

Elshamy had been imprisoned without charge for 304 days. He has been on hunger strike for 147 of these, surviving on nothing but water and the occasional glass of juice. The effect on his health has been devastating, as these before-and-after pictures show: Elshamy’s round face and chubby cheeks are gone, replaced by the tight, sallow complexion and sunken eyes of a concentration camp victim.

“This is a relief rather than a cause for celebration. Abdullah has been through a terrible ordeal for over 10 months. He’ll want to spend time with his family and recuperate. When he’s ready, we look forward to seeing him back in action, doing the vital job of journalism that he so clearly loves,” said a spokesperson for Al Jazeera.

Elshamy was arrested in August last year while covering a protest by supporters of deposed President Mohamed Morsi. The protest was dispersed by police, violently, and Elshamy was caught in the drag net. He had committed two cardinal sins in the eyes of the new military regime, led by then-Field Marshall (and now elected president) Adbelfatah al-Sisi.

His first mistake was to work for Al Jazeera, the Qatari news channel which is considered both anti-military and pro-Muslim Brotherhood. Al Jazeera’s local affiliate was subsequently banned. His second mistake was to give any attention whatsoever to the opposition protests. In the new Egyptian context, talking with or reporting on the Muslim Brotherhood is considered an act of subversion; impartial, independent journalism is treason.

Three of Elshamy’s colleagues have also learned this lesson, the hard way. Languishing in jail on vague, trumped-up charges are Al Jazeera journalists Peter Greste, Baher Mohammed and Mohammed Fahmy, who were arrested in December 2013. Unlike Elshamy, these three have actually gone to court, but the chaotic and often inexplicable nature of the proceedings has just served to underline the farcical nature of the judicial process. In one of the last hearings, prosecutors presented a scratchy recording of the famous Gotye song ‘Someone that we used to know’ as evidence in the case – without explaining how or why it implicated the defendants. In another moment of sheer absurdity, the judge wished the detained journalists a “happy World Press Freedom Day”. He wasn’t joking.

The verdict in the trial of Greste, Mohammed and Fahmy is due next Monday (June 23). Al Jazeera are cautiously optimistic of an acquittal. On the balance of facts, an acquittal is guaranteed. On the balance of political interest, however – which seems to be more important to Egypt’s courts than any notion of justice – their fate is far from certain.

It was in Egypt, remember, just a few months ago that a court sentenced an unprecedented 683 people to death for their alleged support of the now-outlawed Muslim Brotherhood. And in the same courtroom, just a month before, another 529 people were given the same sentence for their alleged participation in the murder of one policeman during protests in the city of Minya. All but 37 of the earlier verdicts have since been commuted by religious authorities, but this doesn’t make the original decision any less ridiculous – at least on the surface.

As the Daily Maverick noted at the time, there actually was method to the court’s apparent madness. Its decision fed into a concerted effort by the military regime to marginalise the Muslim Brotherhood, and push its members further and further away from the moderate centre. In doing so, the military regime gave itself all the legitimacy and credibility it required to maintain its grip on the state (a grip that has continued in the form of al-Sisi’s presidency).

There is method too in the crackdown on journalists, which is not limited to Al Jazeera employees alone. “Things were never good for the press in Egypt, but they have worsened significantly since former President Mohamed Morsi was ousted last summer,” commented Courtney Radsch, advocacy director the Committee to Protect Journalists. “…at least six journalists have been killed since Morsi’s ouster and 16 journalists are currently imprisoned. Dozens more have been detained and released, creating a climate of fear and repression that has dampened the ability of journalists to cover political developments and the most recent election.”

Which is exactly the point. Al-Sisi won the May election with an overwhelming majority (although turnout was low), supported by a tame, tethered media that towed his party’s line. A non-free press might not be good for Egypt, but it’s certainly good for Al-Sisi and the cabal of general and Mubarak-era bureaucrats that now run the country. Regardless of Elshamy’s release, and regardless of the verdict in the Al Jazeera case next week, don’t expect conditions for journalists working in Egypt to improve any time soon. DM