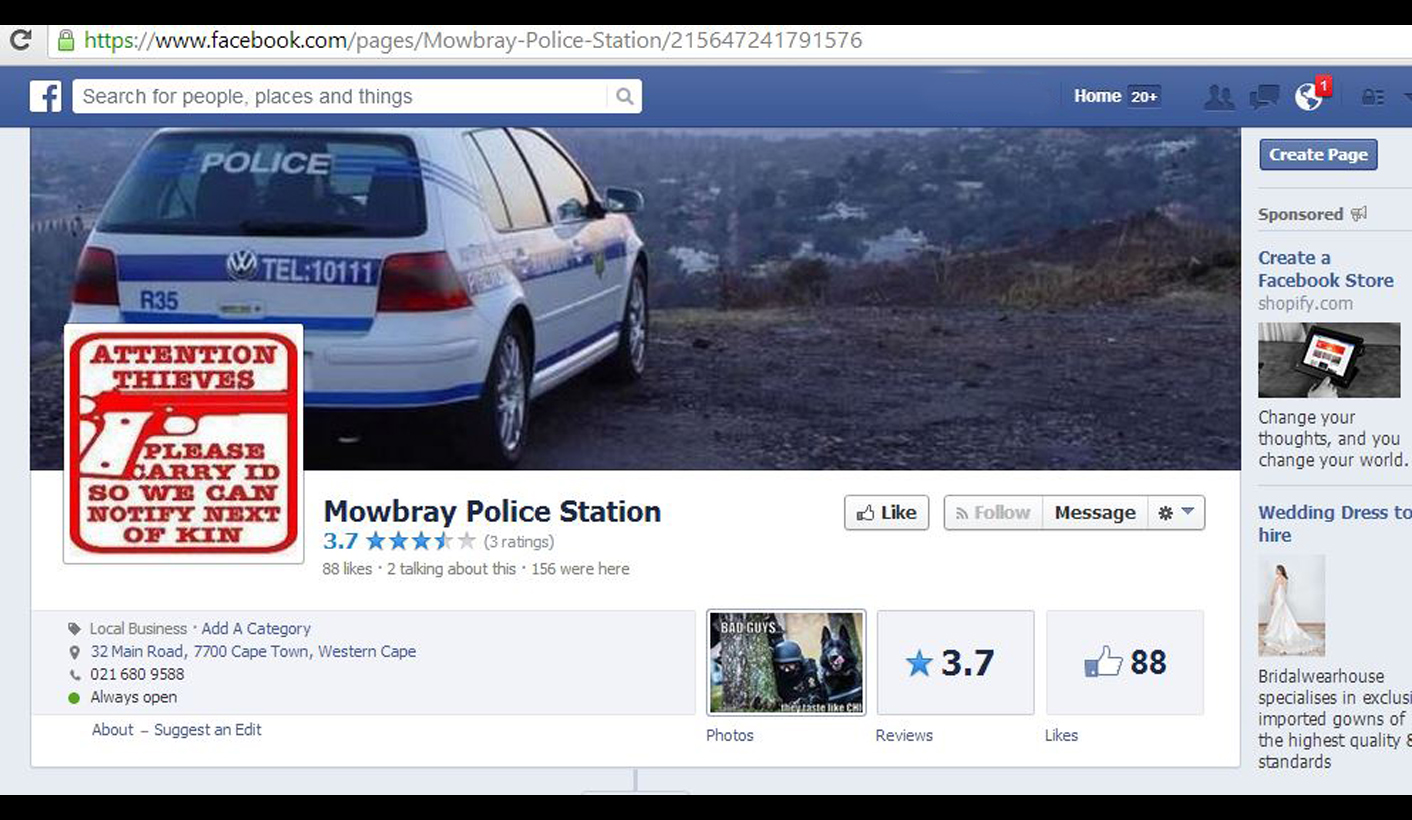 Few would dispute that the South African Police Service has an image problem. High-profile cases of police brutality over the past few years have fuelled the perception of a trigger-happy and ill-disciplined force. Social media isn’t helping: a Facebook page which appears to represent a Cape Town police station reinforces the sense of a violent and brutal internal police culture. By REBECCA DAVIS.

Mowbray Police Station, in Cape Town, appears to have its own Facebook page, brought to the Daily Maverick’s attention this week. Established in 2012, it is not updated very often. It has been used in the past to post news relating to POPCRU, the police union, and to call for donations for the station’s year-end function. The site’s administrator has also posted to respond to queries, such as how to apply to become a SAPS member.

But the major function of the site seems to be to share police-related photographs and “memes”: images with text superimposed which spread rapidly online. There is a noticeable theme: the content which is shared on the Facebook page valorises a decidedly “hardline” approach to law enforcement.

The site’s profile picture is a mocked-up warning sign, with an image of a gun, which reads: “ATTENTION THIEVES. PLEASE CARRY ID SO WE CAN NOTIFY NEXT OF KIN”. The implication is that thieves caught should expect to die.

One photograph features a riot-geared policeman next to an Alsatian licking his chops, and bears the legend: “BAD GUYS…they taste like CHICKEN”.

“Due to the price increase on ammo don’t expect a warning shot,” reads another. “Sorry, but times are hard.”

It might be easier to laugh off these postings as a form of stress-relief for battle-scarred police officers, or just a kind of macho posturing, if they didn’t closely reflect what many people suspect to be SAPS’s actual modus operandi.

The quip about warning shots, for instance, echoes an entirely non-humorous statement made by erstwhile Deputy Minister of Safety and Security (now Minister for Women in the Presidency) Susan Shabangu in 2008:

“You must kill the bastards if they threaten you or the community. You must not worry about the regulations. I want no warning shots. You have one shot and it must be a kill shot.”

A year later, President Jacob Zuma made similar comments to a meeting of police station commanders in Pretoria. “Police have no time to fire warning shots,” he was reported as saying. “If they do [fire warning shots] we will be burying a lot of police officers”.

In Rehad Desai’s Marikana documentary, Miners Shot Down, there is chilling footage of police officers excitedly conversing after having opened fire on striking miners and witnessing the effects of their shooting as the dust clears. One police officer compliments another that he shot his target with “nice skill”. 2012’s Marikana massacre compounded the view of SAPS as heavy-handed, but numerous other instances of police brutality have come to light since then.

Sometimes these cases have only been highlighted because a bystander happens to have shot amateur footage of the scene. This was the case in March, when cellphone footage of two Cape Town policemen assaulting a suspected robber was posted online. The footage showed police punching and kicking a naked man in his genitals while an observer shouted “police brutality!”

The last annual report of IPID, the Independent Police Investigative Directorate found that the number of cases of brutality and criminality against police increased by 37% over 2012/2013. One of the cases that received the most attention was that of taxi driver Mido Macia in February last year, who was dragged behind a police van in east Johannesburg and later died in a holding cell.

At the Institute for Security Studies (ISS)’ annual crime conference in August 2013, Crime and Justice Programme director Gareth Newham reported that brutality cases recorded against SA police officers increased by 313% between 2001/2 to 2011/12. “It appears police misconduct is met with impunity,” Newham said at the time.

President Jacob Zuma, in an interview with the Independent group in February this year, professed himself to be discontented with police brutality.

“No, I am not happy,” he said. “I don’t think anyone can be with trigger-happy police. It’s not good at all.”

When the Daily Maverick phoned the Mowbray Police Station on Wednesday, using the correct number listed on the Facebook page, we were told that the person responsible for maintaining the Facebook page was unavailable.

Western Cape police captain FC van Wyk instructed the Daily Maverick to forward the details of the page for comment, but failed to respond thereafter.

The DA’s Shadow Police Minister Dianne Kohler-Barnard didn’t mince her words on the matter. “To the average police officer who deals with violent crime on a daily basis, posts like this may well be ‘amusing’, but for the average SA citizen this is exactly the sort of culture they have come to fear,” Kohler-Barnard told the Daily Maverick.

“Comments made about not firing warning shots, and about casual killing, are not jokes. SA citizens have been brutalised, raped and murdered by police officers, and the full knowledge that there are nearly 1,500 known convicted criminals in their ranks, carrying firearms, should have had whoever set up this site pause for thought.”

One thought sticks in the mind. If this is the kind of content deemed appropriate for public-facing communication from SAPS, one wonders what kind of stuff does the rounds behind closed doors. DM