The doubled-edged sword of Africa’s achievements at World Cups 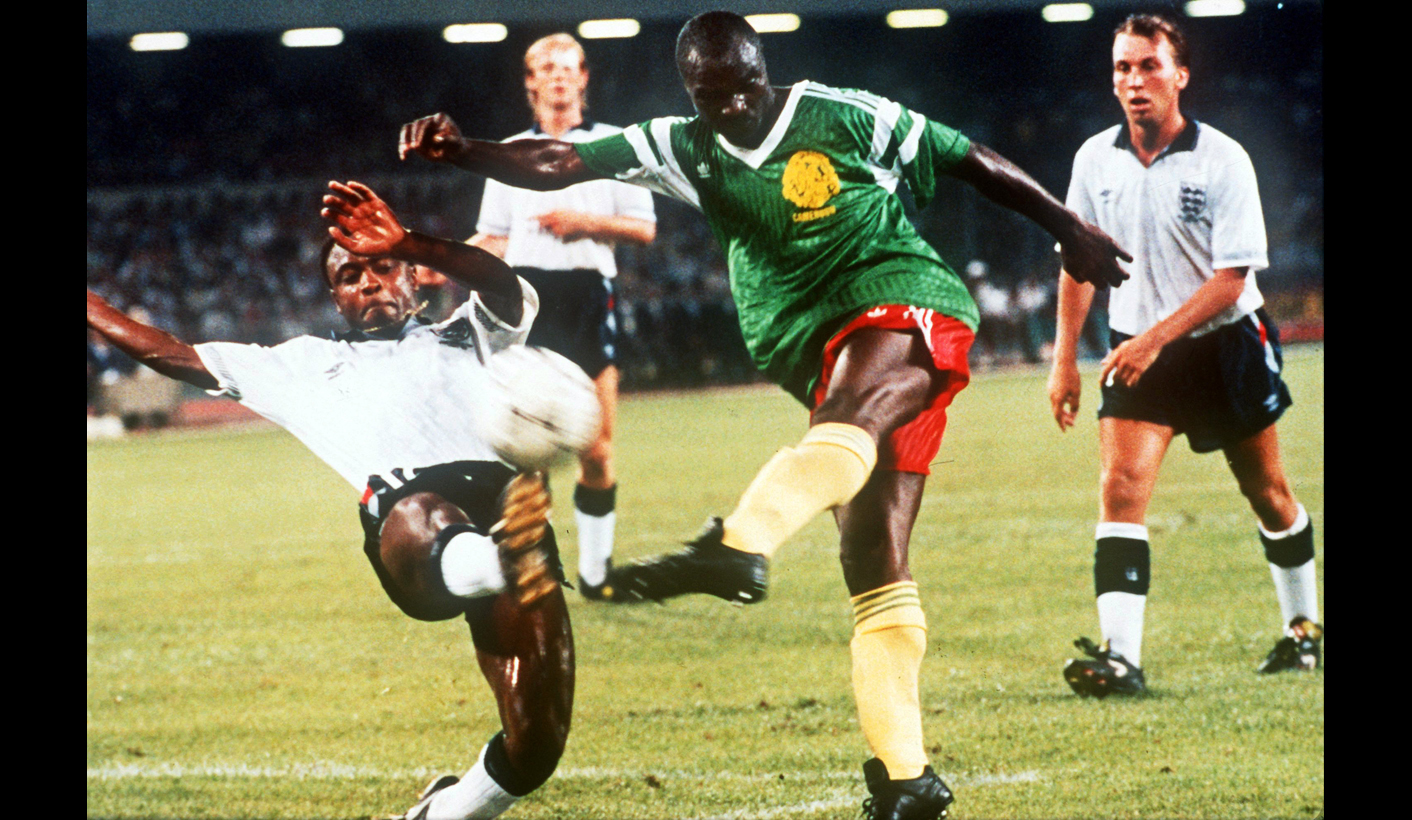 African teams have had some great moments in World Cups throughout the years, despite many difficult challenges. There is much that deserves to be celebrated, but also much that should be mourned. The reasons for Africa not reaching its full potential at World Cups are varied. By ANTOINETTE MULLER.

In 1990, Cameroon were the darlings of the Soccer World Cup. With Roger Milla’s hips not lying, a win over Argentina and the team’s eventual run to the quarter-finals, all of this opened the door for an additional African team to qualify for the tournament four years later. But Africa’s success dwindled for some time and it would only be 12 years later that the world would sit up and take note again.

Over a decade later, Senegal were the surprise package at a predictable World Cup. Like Cameroon before them, they started off their campaign with a win over the defending champions France and would eventually be knocked out in the quarter-finals.

Then, in 2010, Ghana had one of the most impressive runs for an African team in World Cup history and were on the brink of becoming the first semi-finalists, only to have their dreams shattered by a missed penalty in the dying minutes.

With another World Cup around the corner, Africa’s teams will once again hope to impress on the global stage. Pele had predicted that an African side would lift the World Cup before the end of the 20th century, but that has not happened. While Africa is well-represented at the finals this year with Algeria, Cameroon, Ghana, Ivory Coast and Nigeria carrying the hopes of the continent, it’s unlikely that any of these teams will go on to lift the trophy. Ivory Coast’s golden generation have the best chance of going far, but they are notorious for their struggles in crunch matches.

But why have African teams struggled so much at World Cups? Spot allocation is one theory. As a continent, Africa has 53 countries with 48 of them competing. It gets only five non-automatic places at the competition. Europe gets 13 places. It used to be even worse, with Africa only allowed two places in the early years of their return. There is no equality of opportunity for African teams to make history and write themselves into the memory books.

Everyone will remember Milla’s hip-shaking, but George Weah, arguably Africa’s most talented son, never even had a chance to play at a World Cup. There are others, too, who have missed out on their chance at glory.

Often when they do get that chance, it is marred with controversy. The elimination of Algeria in 1982 is one of the most curious cases of an African team being on the receiving end of dubiousness. Having beaten both West Germany and Chile, Algeria slipped up against Austria, but still had a chance of advancing, unless West Germany beat Austria 1-0 or 2-0.

The Germans went ahead early on against Austria and once both sides realised how the score would benefit them, play slowed. Shots, tackles and sprints were nowhere to be seen. It caused outrage form the media and fans with one Austrian commentator going so far as to tell viewers to turn off the TV. The competing teams were not bothered by their actions and no immediate action was taken by Fifa. There were calls for the game to be replayed or at least for the Europeans to be punished, but the governing body did nothing. It did change the future approach, though, ruling that the last pair of group games must be played at the same time.

Many will argue that it was simply tactical, while others will call it blatant match-fixing. While severe punishment would have been hard to prove, some sort of comment from the powers that be would have been welcomed. What would the lack of reaction have been if the team eliminated on the back of such a showing was somebody like Argentina or France or England?

The treatment of teams from the continent by officials is certainly questionable. But there is also the oddity of how success is often portrayed.

African success is viewed as a novelty, despite many great achievements by its players. That success is also often diluted with patronisation. Yaya Toure had recently said that African players do not get as much recognition as they should. It caused outrage in many quarters, but the man had a point. While Toure and co are competing against the likes of Luis Suarez, Lionel Messi and Cristiano Ronaldo for the big awards, neither Toure nor Drogba were ever named Premier League player of the month. One can understand how Toure might feel irked, but that his frustration is also coupled with playing in an era that is brimming with superb talent.

The current Ivory Coast team is one of the best ever, despite their penchant for choking in clutch games. Yet they will probably not be remembered as such because of their failures on the world stage.

Yaya Toure has won the African Player of the Year award thrice. Didier Drogba has won it twice before. Drogba is a record-goal scorer. Toure is a midfield beast who was integral in helping Manchester City to the title this year. Cheick Tiote has blossomed at Newcastle and Wilfried Bony is equally growing in stature.

Like many other players, though, they have struggled significantly when making the shift from club to country.

Africa has never had more than one African side in the knockout stages and John Barnes, who represented England at the 1986 and 1990 World Cups, believes that a mental tweak is required.

However, the issue is more complex than that. Barnes also knows that the treatment from officials often leaves African football disillusioned, something which has been echoed by Samuel Eto’o.

“The only problem in Africa is our leaders, who do not respect us. Until we are respected, other (continents) will never have any consideration for us,” Eto’o told the Confederation of African Football (CAF) website.

But there are two sides to this story. Eto’o was barred from the national team for instigating a boycott over unpaid bonuses two years ago. Cameroon also refused to board a plane this year because of a bonus dispute. While they might have a valid point, it’s not going to help the cause or the projected image. Many will view it as prima donna behaviour.

However, Weah, the only African player to win World, European and African Footballer of the Year awards, agrees that the governing of the sport needs an overhaul.

“Former players govern European football while those without passion or knowledge of the game rule in Africa. Footballers rather than officials should travel business class on flights because they are the ones going to play,” he said.

Others, like Bosnia-born Algeria coach Vahid Halilhodzic, theorise that a combination of political influence as well as a struggling socio-economic environment adds to Africa’s struggles.

Politicians do stick their noses in footballing business and Halilhodzic believes that because of the desire to want to play in Europe, many African players often forget their team.

To counter this and for Africa to succeed globally, a clear pathway to success needs to be carved for its players. Academies are forever appearing across the continent, but many players would still far rather compete in Europe than in their domestic leagues. Growth of leagues will take time and will require serious investment. The interest is certainly there to justify the investment.

Support for African football is somewhat unique in the way that most of the continent tends to rally together around its teams. Africa is not a country, but African football certainly is. This rarely happens in other aspects of its business. We are African whenever there is a World Cup on and many will latch onto a favoured African team when their side is not present or knocked out. You rarely hear Europeans talk about being “European” or teams carrying the “hopes of a continent”. That interest from the masses needs to be harnessed. Once the potential is realised, the sport will boom. Until then, there’s always hoping for something special from a number of special players representing their teams. DM

Photo: A file picture dated 01 July 1990 shows Cameroonian soccer legend Roger Milla (C) in action against England players Paul Parker (L) and David Platt (R) during their quarter final soccer match of the 1990 FIFA World Cup between England and Cameroon at the San Paolo stadium in Naples, Italy. In background England’s Mark Wright. England won 3-2 after extra time. Roger Milla, who was born in Yaounde, Cameroon, will celebrate his 60th birthday on 20 May 2012. Milla, who played in three FIFA Soccer World Cups, was the star of the Cameroonian national team at the 1990 World Cup in Italy, scoring four goals as they became the first African side to reach a World Cup quarter final. EPA