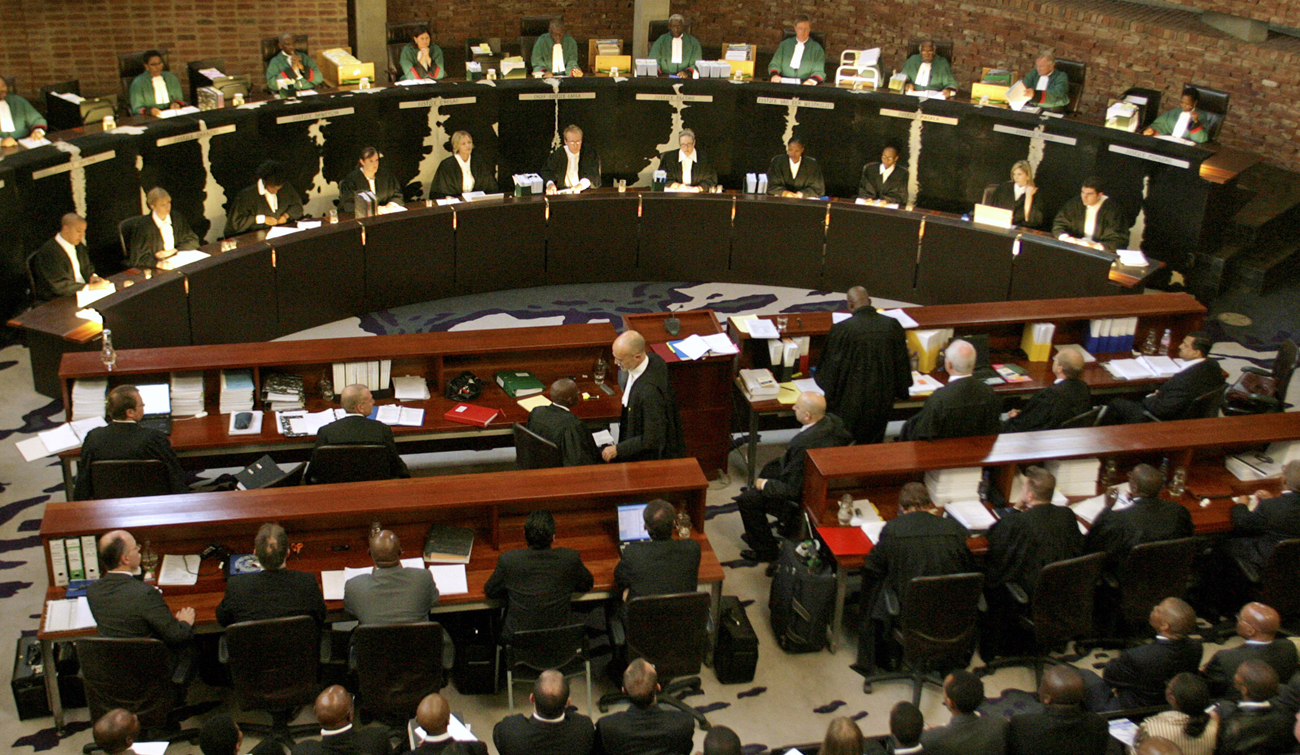 Judges matter. This is, of course, the reason why many people have been getting so anxious about Chief Justice Mogoeng Mogoeng’s utterances about law and religion: because judges not only have the power to decide the fate of those who appear before them accused of a crime, but their statements are accorded a special heft due to their position in our society. But particularly when it comes to sentencing discretion, South African judges sometimes reveal themselves to be deeply fallible. It’s one reason why we should all keep a beady eye on who gets appointed to the judiciary – and how. By REBECCA DAVIS.

The proceedings of the Judicial Service Commission often don’t get as much media attention as they should, considering that the JSC is the body tasked with the hugely significant job of selecting South Africa’s judges. Partly this is for logistical reasons: the JSC doesn’t have a website, for instance. Their media statements announcing vacancies on the bench aren’t particularly widely circulated. Many South Africans, it’s safe to say, have only the haziest idea of how judges actually get appointed.

This was one of the points repeatedly returned to at a ‘Judges Matter’ conference in Cape Town on Thursday, organised by UCT’s Democratic Governance and Rights Unit (DGRU). The way the process actually works is as follows: Nominations are made following the JSC’s announcement of vacancies; these are sifted through; a shortlist is announced; organisations are given the opportunity to make comments on the candidates or express support; open interviews are held with the candidates.

But despite the transparency of the last part, there are stumbling blocks to attentive public engagement with the process. The DGRU’s Tabeth Masengu pointed out that the time-frame between the announcement of the shortlist and the commencement of the interviews is often too short to allow for in-depth research on the candidates and their track records. Certain candidates – “the famous ones”, as Masengu put it, like Jeremy Gauntlett, who has missed out on a judicial position five times – tend to dominate what little media airtime is given to the JSC process.

And despite being open to all, it’s not like the JSC interviews are the hottest ticket in town. “The fewer people who attend JSC hearings, the less scrutiny there is on them,” Masengu said.

On some occasions, the JSC seems to simply fail to do “due diligence” on the shortlisted candidates. The Open Democracy Advice Centre’s Alison Tilley cited the example of magistrate Sibusiso Msani, shortlisted by the JSC this April for a position on the KwaZulu-Natal bench. It emerged that Msani had used his position to delay paying maintenance for three children, claiming that DNA tests were uncertain even though they showed a 99,99% match between him and the children. This was worrisome not just because of Msani’s potential abuse of his position, but also because he seemed to reveal a lack of understanding about DNA testing despite having to preside over cases where DNA evidence would be relevant.

The paternity issue was only raised on the day of his JSC hearing because someone happened to email the commission the day before, Tilley said. “If we say the process is broken, that’s what I mean.”

Another issue Tilley brought up is that shortlisted nominees who have served as magistrates, acting judges or judges previously only have to submit a number of their previous judgments to the JSC, so it’s natural that they put their most impressive foot forward. There is no database which allows you to access all past decisions in one place.

This is significant because, particularly when it comes to crimes of gender-based violence, the language of judgments – as well as the sentences imposed – can be deeply revealing of a judge’s views on gender and sexual behaviour.

“Where gender and law meet, where the intersection is most transparent, is rape judgments,” Tilley said, suggesting that these judgments could provide a litmus test as to judicial attitudes.

There is evidence to suggest that South African judges sometimes use shockingly misplaced language in their rulings on these matters. We’ve been reminded this week of Mogoeng Mogoeng’s reference to a rapist’s “tender approach”, for instance. One of the JSC’s shortlisted candidates in April had written a judgment describing a rape complainant as a “gold-digger”, to give another example. Because judges are supposed to tell us “what really happened”, and we trust them to do so, their personal bias can easily masquerade as objective fact. In this way, judges can effectively play a very destructive role in perpetuating myths about rape.

“Patriarchal prejudice can look and sound a lot like what the law says, when in fact it is only a judge’s opinion,” the Women’s Legal Centre’s Sanja Bornman suggested.

Sentencing also offers a glimpse into a judge’s views on these matters. South African judges are given discretion when it comes to imposing sentences, but there is a minimum sentencing framework which they are supposed to adhere to, Bornman explained. Rape, for instance, carries a minimum life sentence if: the person was raped more than once by the accused; was raped by more than one person in common purpose; was raped by someone convicted of more than two offences of rape; or was raped by someone who knew they are HIV-positive. It also carries a minimum life sentence if the complainant was under 16; physically disabled or mentally ill; or subjected to grievous bodily harm in addition.

If, however, there are “substantial and compelling circumstances”, these can justify the imposition of a lesser sentence. Among the factors that should not constitute substantial and compelling circumstances are: the complainant’s sexual history; a lack of physical injury; the accused’s cultural or religious beliefs about rape; and the existence of any form of relationship between the accused and the complainant prior to rape.

This is all worth spelling out in some detail, because Bornman says it is “astounding” how often judges deviate from this framework in sentencing. She cited the case of S v Sehlake, in which the defendant had raped a four-year old girl – which, according to the sentencing framework, should have automatically warranted a life sentence. He received a sentence of 12 years instead because the High Court judged that substantial and compelling circumstances in this case included that he was a first-time offender; his father had abandoned his family; and the complainant had received no serious injury.

In the case of S v Van Oudtshoorn, the 57-year-old appellant had been convicted of raping his two daughters between the ages of nine and 12. Among the factors that the North Gauteng High Court found relevant was that “the appellant obviously lacks proper insight into and understanding of his conduct – why it is unlawful and why society regards it as unacceptable”. He clearly considered that “he was entitled to do what he did,” the high court judgment noted, was not corrected by his wife, and “this is a very important factor to be taken into account in his favour”. He was sentenced to an effective 15 years in prison.

Bornman cited a further instance in which a life sentence was set aside in the case of the rape of an 11-year-old, taking into account aspects like the 11-year-old’s supposed “rebelliousness” and the fact that she had discussed sexual intercourse with a cousin.

Lucy Jamieson, of UCT’s Children’s Institute, pointed out that these cases by no means constitute the most extreme examples her unit encounters.

With this worrying situation as background, conference attendants agreed that one of the factors the JSC should be paying more attention to is aspirant judges’ perspectives on gender issues, potentially using rape judgments as an assessment tool. Advocate Susannah Cowen noted that one of the reasons why judge appointments are tricky is because so much of the assessment is qualitative, but one concrete aspect that can and should be attended to is past sentencing records.

Another issue raised is that women are still under-represented on the bench, with Masengu noting that currently just 32% of the judiciary is female. This is partly because equivalent support structures for women are lacking, it was suggested, with women also being less likely to be encouraged to see themselves on a judge’s path. Nonetheless, it was acknowledged that merely appointing more women, or black people, is on its own no guarantee of a transformed judicial philosophy.

Among the potential steps suggested by conference participants – drawn mainly from academia and civil society – was that the performance of judges and magistrates should somehow be recorded and measured, possibly through the establishment of some sort of database. The appointment process for magistrates, which is shrouded in mystery, should also be rendered more transparent. If JSC resources were increased – perhaps allowing for a website – it would also facilitate public engagement with the process, it was suggested, as well as potentially giving the commission’s members more time to do their work.

On one point all were agreed: the need for the message that judges matter to be vocally, and frequently, reinforced. DM