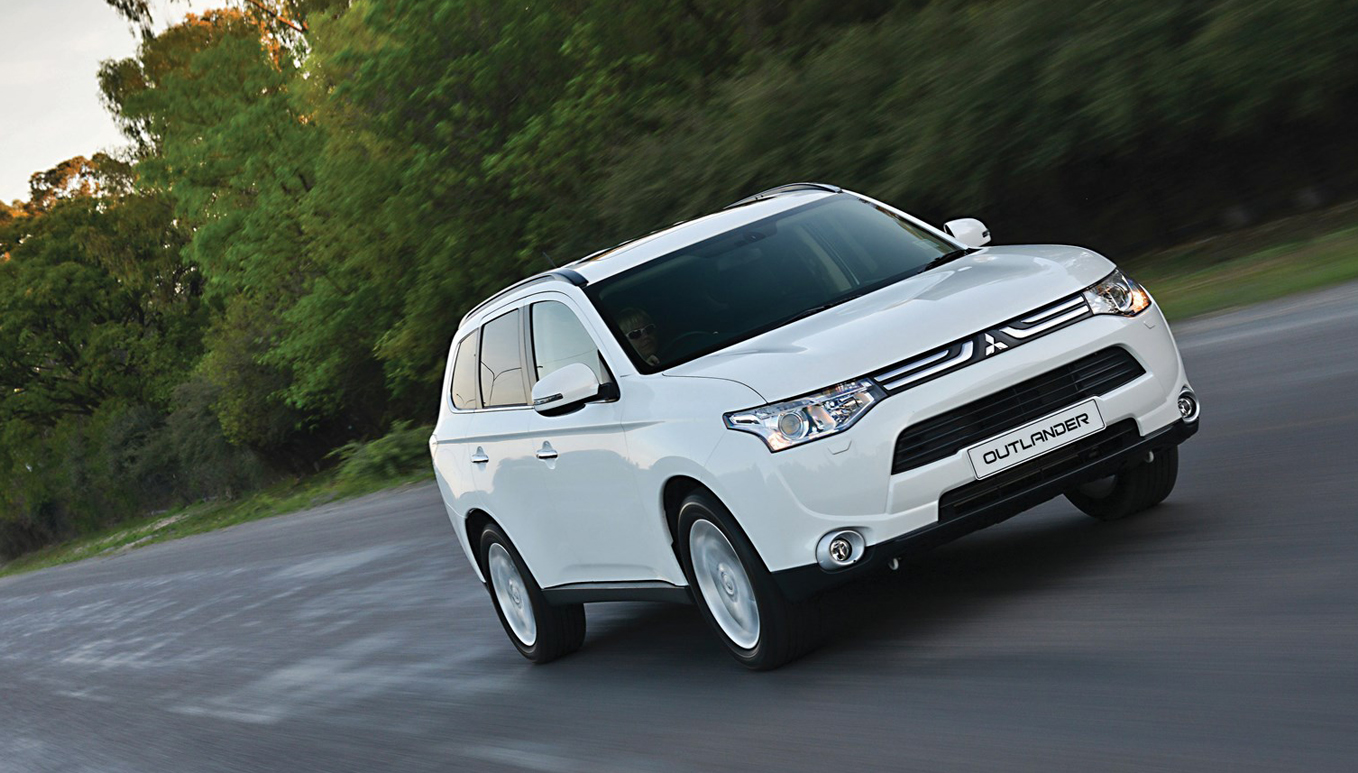 The Mitsubishi Outlander is a pedigreed player in a closely contested segment. The medium-sized soft-roader offers seven seats and a full-house interior, clean and slipstreamed styling, and an electronically controlled all-wheel drive system. But compared to its rivals, its strongest selling proposition is value for money. Does that make the latest Outlander a compelling buy? DEON SCHOEMAN finds out.

How things have changed. Today’s Korean cars are right up there with the best. They’ve been designed, developed, engineered and executed in-house, and they’re proof of how quickly an industry can progress from fledgling to famous.

What relevance do Korean brands like Hyundai and Kia have in a review of a Japanese product? Well, the product in question is the Mitsubishi Outlander, a medium-sized SUV with two strong Korean rivals: the Hyundai Santa Fe, and the Kia Sorrento.

The Outlander has a pedigree that stretches back over several decades, while the Santa Fe and Sorrento nameplates are relatively recent additions to the softroader fray. They also look keener and fresher, with designs that exude both style and character.

Dare I say it? This may be the latest, all-new version of the Outlander, but in pure design terms, it looks more conventional, more conservative, than its Korean rivals. The shape is generic rather than expressive, with only the front-end treatment offering any real visual character.

At least, the slim, faux grille, garnished with chrome and the Mitsubishi brand mark, confirms the identity and origin of the Outlander. The clear-lensed xenon headlights add sophistication and sparkle, while the large lower air intake (real, this time) contributes a measure of welcome aggression. Integrated fog lamps and comprehensive colour coding provide the finishing touches.

The profile view is much less inspiring, with the bulbous smoothness of the shape providing very little of visual interest. The alloy wheels are handsome, but seem a little lost in the generously proportioned wheel arches – and that despite the standard 18-inch wheel size.

The new Outlander’s silhouette also confirms that this is a big vehicle. It’s overall length of 4,655mm is substantial, exaggerated by the extended overhangs front and rear. The 190 mm ground clearance is useful even by softroader standards.

The rear is a strange melange of bling (textured, shiny plastic bits around the tail light clusters) and sensible practicality. The tailgate is motorised, and opens nice and wide, making access to the boot easy.

Talking of which, the flat-floored luggage compartment conceals a hidden talent: two pop-up seats that can be raised in a flash, and while the result is short on legroom, those seats are good enough for youngsters on a school run, for instance.

Raising the seats leaves very little space for luggage, so treat the Outlander as a five-seater when travelling long-distance. There’s a generous 477 litres of cargo space to play with, and if that’s not enough, the 60:40 split middle seat row can also be folded flat, boosting the loading area to an impressive 1,608 litres.

In fact, there are many reasons why the Outlander’s cabin is arguably the highlight of this package. Space and versatility apart (you can seat three adults in the centre row), the comprehensive level of the standard kit is what will impress the value conscious.

The interior upholstery is real hide, the leather-trimmed steering wheel has multifunction controls, and for gadget freaks, there’s a touch-screen display that provides menu-based access to a comprehensive list of features and functions.

Pity then that the upmarket, sophisticated ambience of the cabin has to be compromised by the horrible, fake wood accent strips that look completely incongruous and out of place – especially since the centre dash gets a much smarter, gloss black finish. That’s something the Koreans would have done a decade ago.

This latest Outlander is powered by a 2,4-litre four-cylinder petrol engine. Equipped with fuel injection and variable valve timing, the power plant is good for 123kW at 6,000 rpm and 222Nm of torque at peaky 4,100 rpm.

But here’s the bad news: the engine’s urge is transferred to the wheels via a Continuously Variable Transmission (CVT). CVTs are meant to be more efficient than normal gearboxes, because they offer infinitely variable gearing that always finds the best match between engine speed and load.

The problem is that they can sound strained, with little relation between the engine speed and the vehicle’s progress – an effect that’s a bit like a slipping clutch. In this case, the engine’s peaky nature, and the relatively heft weight of the Outlander, conspire to make this so-called ‘rubber band effect’ sound even worse.

The Outlander is equipped with gearshift paddles, which allow selection of six virtual steps, in lieu of actual gears. The result is certainly more natural than running the CVT in normal, automatic mode, but the shift reactions are slow, and sixth is so tall that it’s hardly ever usable.

You always find yourself using maximum revs to encourage the Outlander, but the result isn’t exactly in the performance league. Mitsubishi doesn’t publish claimed performance figures, so mine are merely estimates: I’d predict a 10 to 11 sec 0-100km/h acceleration time, and a 175km/h top speed. As for fuel consumption, I ended up with an average in the mid-11 litres/100km bracket, but the claimed combined cycle number is 8.2 litres/100km.

The standard four-wheel drive system operates automatically and seamlessly, with almost no driver intervention required except for a mode selector button in the centre console. In ‘Eco Mode’, the system actually sticks to two-wheel drive in the interests of efficiency, but Auto Mode is the most versatile, sensing slip and traction loss, and distributing power between the front and rear axles if and when required.

That composure also extends to on-road use: the suspension is compliant without becoming soggy, with decent damping taking care of the dips and bumps, while firmer spring rates ensure control. Thus, the chassis scores a thumbs-up.

Considering that the Outlander will be a family vehicle for many buyers, safety is a further important agenda. A five-star Euro NCAP rating confirms the soft-roaders status in that regard, together with traction and stability control, hill start assistance, ABS anti-lock brakes with discs all round, and multiple airbags.

So, the new Mitsubishi Outlander is a big of a mixed bag. It excels in some areas, and disappoints in others. Top of the thumbs-down list has to be the CVT gearbox: I’m convinced a normal manual transmission would transform the driving experience by allowing more precise, more circumspect control.

On a more subjective note, the styling is bland an unimaginative, especially when compared to its Korean rivals. And the soft-roader could do with more pep and response, too.

The plus points include all-terrain capabilities that are impressive in the soft-roader context, an interior fit for royalty in both comfort and standard equipment terms, and the versatility of those two extra seats – even if they lack ultimate legroom. There’s also the Mitsubishi reputation to consider.

But here’s the clincher: you get the full Monty for R429,000, which is very competitive in this segment – and especially so given that it includes all that standard equipment. The result is a compelling value proposition – the kind of value that’s hard to ignore.

Does it put the Outlander at the top of its segment? No. But value for money can be very persuasive indeed, and for those content to live with the whine of the CVT, and the lack of dynamic sparkle, while enjoying the luxury, the space and the ride, the Mitsubishi Outlander is arguably the most sensible option. DM