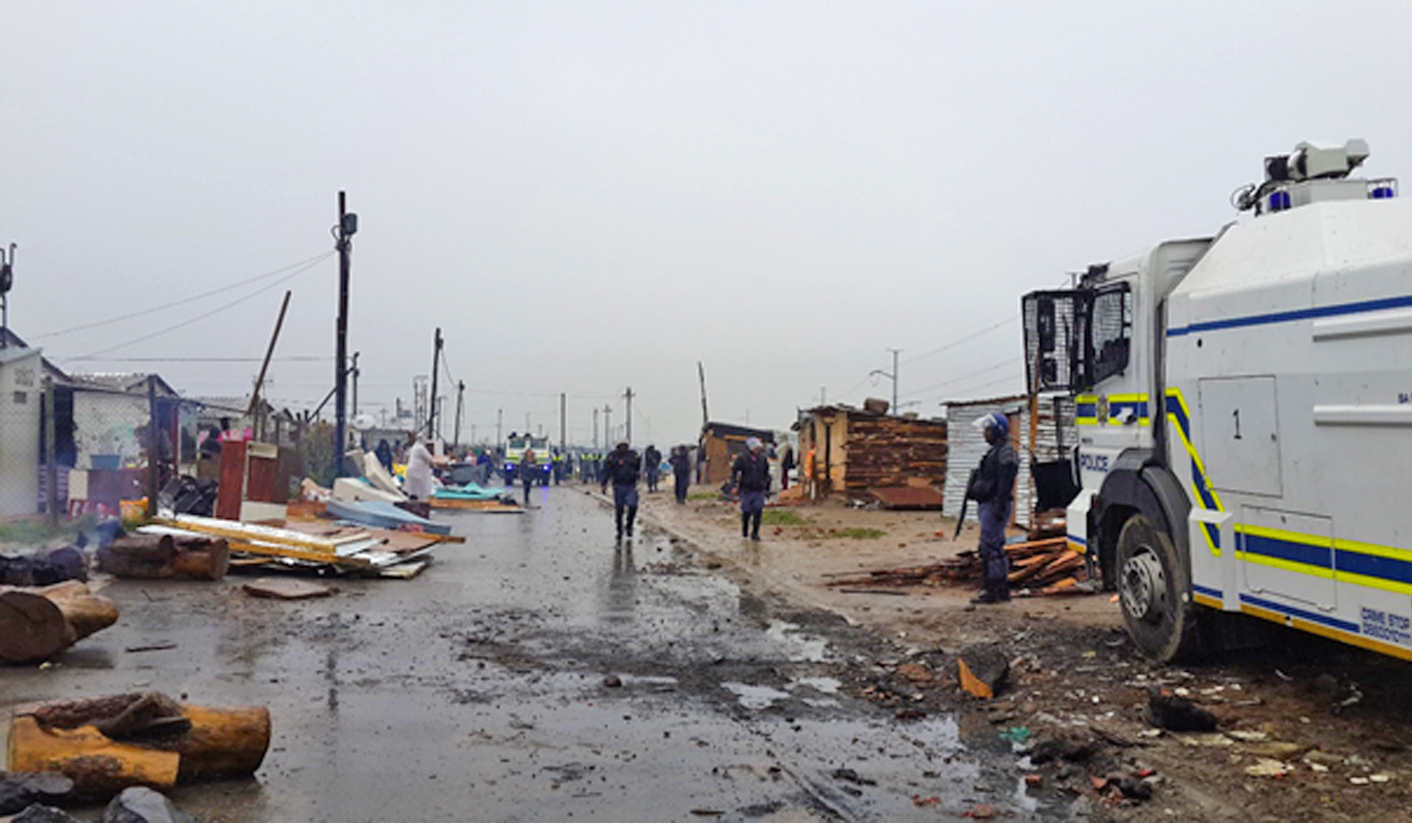 Hundreds of people were left homeless at Nomzamo settlement in Strand on Tuesday. Shacks were smashed down while their owners watched. By Pharie Sefali and Adam Armstrong for GROUNDUP.

Sonwabile Sango came home from work on Monday to find his shack demolished and his possessions gone.

“I came from work late yesterday afternoon and I just saw police and people wearing green vests destroying our houses. I asked where are my belongings and no one seemed to know. I lost everything and I have been wearing the same clothes for two days now and I do not know what’s going to happen to me,” said Sango.

He was one of hundreds of people whose homes were demolished this week after the South African National Roads Agency (SANRAL), which owns the land, acted on an interdict obtained from the Cape High Court earlier this year, preventing people from illegally occupying the land.

A home is demolished.

The Sheriff of the Court enforced the interdict with the help of private contractors on behalf of SANRAL, tipping the shacks over and pulling them apart.

This morning more than 30 shacks were destroyed while owners watched helplessly. At times the crowd and police clashed. Teargas was fired and those closest to the police fled. Some residents were sprayed with a water cannon. SAPS and City of Cape Town Law Enforcement officers were on hand to implement the interdict.

People had to leave their belongings on the roadside because they had nowhere else to put them.

One woman was arrested standing in front of her house, as the men demolishing the shacks approached her home. She cried, asking where she was going to sleep. She said that she had no place to go. Law enforcement officers arrested her, as she was allegedly obstructing the evictions. Her shack was destroyed, while she was being held back by the officers. She cried as she watched.

Sisanda Malibo, who is now homeless, said she was worried as most of her belongings were missing. She lost her identity document. “I am poor and I stayed here not because I had a choice but because I was desperate. I had few belongings but now I have nothing. I have a five-year-old baby and some of her clothes were stolen during this eviction. It’s winter and we do not have a way forward, nor do we know where we are going to sleep. And my bag is missing and I do not have any money. I do not even know what we are going to eat tonight.”

Law enforcement stands between residents and the people doing the demolishing.

Albert Mvoko has been staying in the settlement for two months and is shocked at how the officials are treating them. “These police and the men destroying our shacks like to see us suffer because they are enjoying what they doing because we are black. I have never cried before but with what I am seeing today, any man would break down. We are stripped of our dignity and we are helpless.”

Mvoko continued, “It is so weird how all this is happening after the voting. I voted for a good leadership and this is what I get – nothing. When they wanted us to vote they never told us about evictions. Instead they promised better living conditions.”

Residents move out of their homes with their belongings.

The City’s mayco member for Human Settlements, Siyabulela Mamkeli, said three community facilities would be available to residents for a week.

“With the imminent onset of cold weather, people affected by SANRAL’s action can be sheltered while necessary arrangements for alternative accommodation are made. It must be stressed that many of those affected appear to be young people from backyards, and it is likely they can return to their families or find other alternatives,” he said.

Community Hall where residents will be temporarily sheltered.

Mamkeli said that although the City would help with accommodation, it did not condone illegal occupations. “It must be stressed that the people were aware that their actions were illegal. The City cannot incentivise illegal land invasion by providing alternative accommodation, as we have a duty to protect the rights of those people who are on the housing waiting list,” he said. DM

Main photo: Police in riot gear. On the one side of the road are the shacks to be demolished. On the other are people’s possessions strewn alongside the road.

All photos by Adam Armstrong.