GroundUp: Accusations fly as Nomzamo informal settlement is turned to rubble and mud 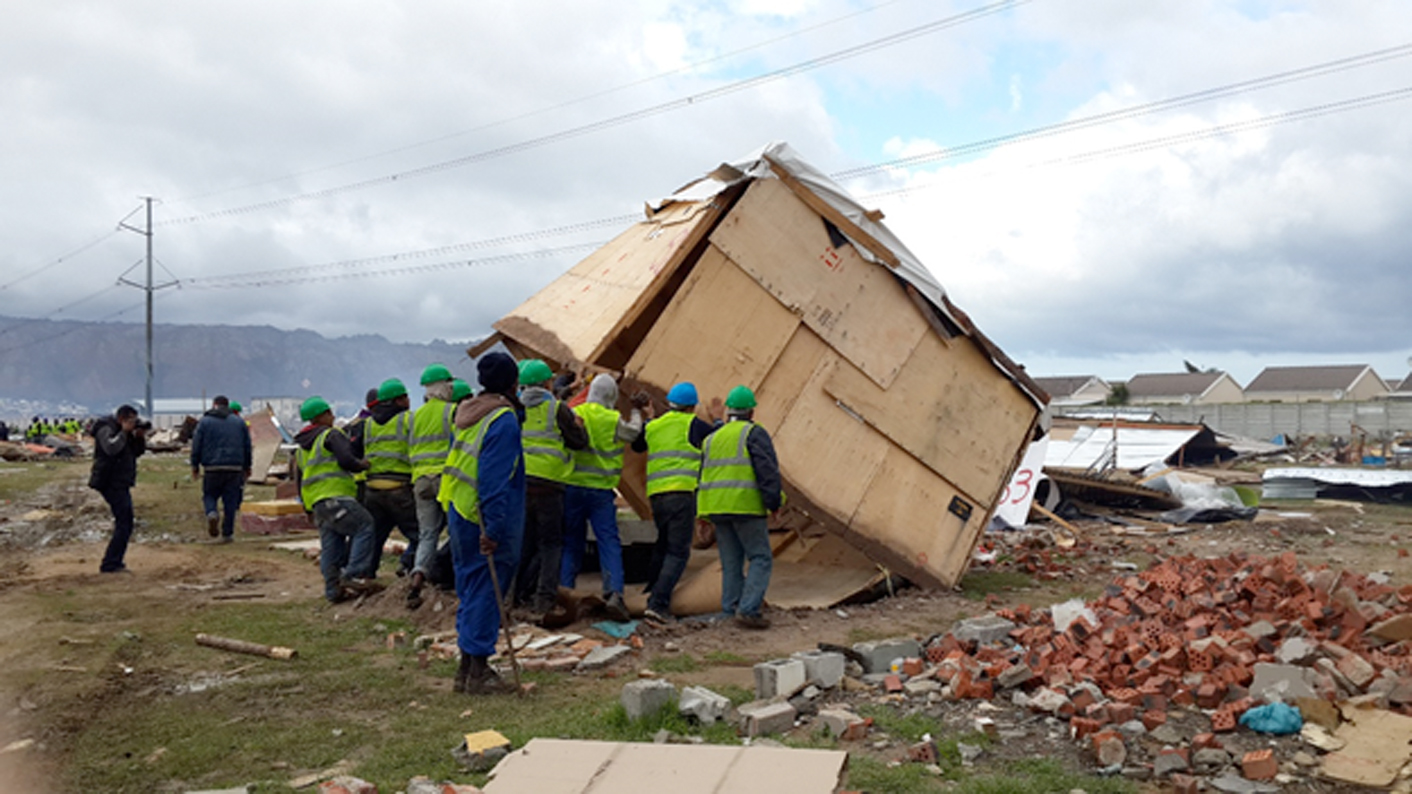 “The law is the law,” said a spokesman for the South African National Road Agency Limited (SANRAL) yesterday as hundreds were left homeless in the rain after the demolition of their shacks on SANRAL-owned land near Strand. By Barbara Maregele and Adam Armstrong for GROUNDUP.

Vusi Mona, spokesperson for SANRAL, explained that the land where the Nomzamo informal settlement has been built was to be used for a bypass on the N2, to allow traffic to flow freely around Somerset West.

Asked about the timing of the evictions, Mona said, “There is no good time for this to be done”. But he said SANRAL was carrying out the letter of the law.

The rain, he said “is a red herring”.

The Western Cape High Court granted SANRAL an interdict on 24 January to stop occupation of the land. But lawyers representing Nomzamo residents are assessing whether the demolition of the homes this week was in fact lawful.

On the front of the interdict used by the Sheriff of the Court, the word “draft” was scratched out with a signature next to it.

The court order with the word “Draft” scratched out.

Dozens of families have been left without homes in the wet and cold weather as the interdict was reinforced by the Sheriff of the Court with the help of police and a private security company following a failed attempt earlier this year.

Mona said the City of Cape Town had pulled out of an agreement to relocate the Nomzamo residents on other land, after a dispute over the proposed R10 billion N1 and N2 Winelands Toll Road project.

He said when the offer to buy the other land was close to finalisation, the City had withdrawn its participation.

“We put an offer on the table to buy another piece of land and donate it back for the people to be relocated to. This was on condition that [the City] provide the people with all other services once they have moved to the land. They wrote to us on 31 August 2011 saying they could not continue with the plan until the intergovernmental dispute over road tolling had been resolved,” he said.

“I don’t understand why they did that because the two issues are not related. We can fight out the matter of tolls in court, but here poor people are suffering. We need to look after the poor now. SANRAL’s mandate is to see to road maintenance issues, not to provide services like sanitation and housing to people living illegally on our land. If we were wrong, the court would never have granted us the eviction order in the first place,” he said.

The aftermath of the demolitions. Photo by Adam Armstrong.

In a statement earlier this year, he said SANRAL had been advised by the City to buy suitable land for the Nomzamo residents.

“In the 2004/2005 financial year, SANRAL allowed the City to provide a certain number of container toilets in the settlements. These toilets have unfortunately been vandalised and damaged beyond repair. The ward councillors requested that the City provide additional services. SANRAL refused to allow the City to provide these services and used the dispute for the proposed N1 and N2 Winelands Toll Road Project as the basis for their refusal,” he said.

Mamkeli said numerous attempts to get the full cooperation from SANRAL had failed.

He said the City had repeatedly advised SANRAL to protect the land against further occupation.

An argument erupted on Twitter yesterday afternoon between – among others – Zackie Achmat (director of Ndifuna Ukwazi), Paul Boughey (Chief of Staff to the Mayor of Cape Town) and Premier Helen Zille, when Achmat placed a letter online from the City to SANRAL.

The letter, dated 22 January 2014, informs SANRAL that the “the structures and occupants pose a danger to themselves and the public in terms of Health and Safety”. It cites the Prevention of Illegal Eviction from and Unlawful Occupation of Land Act. It gives SANRAL 14 days to “rectify the situation, by failure of which you might be rendered responsible for all legal costs as contemplated in [the Act]”.

Letter sent by City to SANRAL in January.

Provincial MEC for Human Settlements Bonginkosi Madikizela said the understanding from the City was that negotiations broke down when the City filed an objection to the toll roads.

“There are many dynamics at play here. While we sympathise with those residents and need to put our heads together to come up with a solution, we also need to respect the court’s decision. We can’t create a precedent for people to think it’s okay to break the law in order to be prioritised. There are many law-abiding people who have been waiting for houses for a long time,” he said.

“We are trying to get clarity around the interdict as it is not an eviction order. At this stage we are trying to determine whether the homes built subsequent to the order granted in January are the only ones affected or not. It not clear how long all of the structures have been here for,” he said.

Kramer said a lawyer had been appointed to deal with the demolition of the shacks.

The order used by the Sheriff of the Court this week called on people intending to occupy the land to provide reasons why a final order should not be granted. The “rule nisi” granted by the court on 24 January was extended to 17 March.

In an affidavit dated 1 April, the residents said they had moved to Nomzamo settlement because they could no longer afford to pay rent as backyarders. Some had been there since December 2013.

Negotiations between City officials, Bishop Michel Hansrod of the Western Cape Religious Leaders Forum, a ward councillor and the leaders of the evicted community resulted in a community hall being opened in Strand to shelter people for the night.

At a mass meeting at the hall last night, it was announced by a community leader that an 18-month-old baby allegedly shot in the morning with a rubber bullet by police, had died. GroundUp has not been able to confirm this or had a chance to obtain comment from SAPS.

The National Minister of Transport, Dipuo Peters, addressed the mass meeting. She apologised to the community “on behalf of SANRAL and government”. She said that the residents must move back onto the land until an alternative is found. DM

Main photo: A home is demolished. Photo by Adam Armstrong.