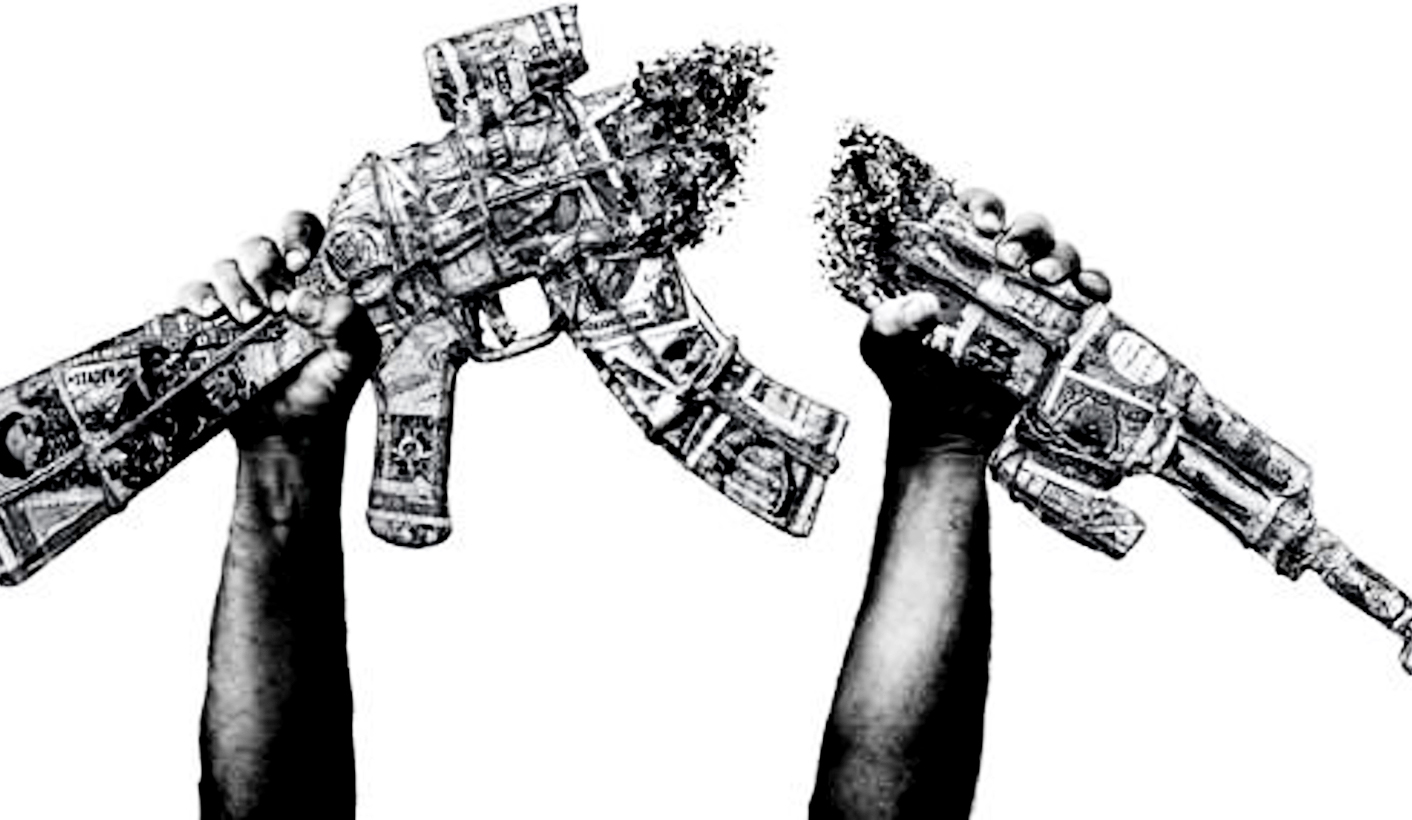 Is there anything ordinary people can do to halt or retard the insidious global arms trade, that murky “parallel world of money corruption, deceit and death”, as activist Andrew Feinstein has described it? This year marks the centenary of the First World War, The Great War, “the war to end all wars” in which, thanks to the global arms trade, an estimated 15 million people died and 30 million more were injured. To mark the 20th anniversary of democracy in South Africa as well as the centenary of the deadliest conflict in human history, War Resisters’ International, founded in 1921 by conscientious objectors to the First World War, will hold its first conference Africa in Cape Town from 4 – 8 July. By MARIANNE THAMM.

In 2007 the International Network Against Small Arms (IANSA), Oxfam and Safeworld released “Africa’s Missing Billions”, a groundbreaking report that for the first time quantified (over and above the human misery) the tremendous economic cost of armed conflict to Africa’s development.

“Around $300bn since 1990 has been lost by Algeria, Angola, Burundi, Central African Republic, Chad, Democratic Republic of Congo (DRC), Republic of Congo, Côte d’Ivoire, Djibouti, Eritrea, Ethiopia, Ghana, Guinea, Guinea-Bissau, Liberia, Niger, Nigeria, Rwanda, Senegal, Sierra Leone, South Africa, Sudan and Uganda.  The sum is equivalent to international aid from major donors in the same period. If this money was not lost due to armed conflict, it could solve the problems of HIV and AIDS in Africa, or it could address Africa’s needs in education, clean water and sanitation, and prevent tuberculosis and malaria,” the report concluded.

One of the key drivers of conflict in Africa is of course, the global arms trade (the most common weapon used on the continent is the Kalashnikov assault rifle) while 95% of weapons found in conflict zones in Africa come from outside the continent.

In the foreword to the Missing Billions report, Liberian President Ellen Johnson-Sirleaf remarked, “This report goes on to highlight the global nature of the problem of one of the key drivers of armed conflict – the proliferation of weapons. Concluding that nearly all of the weapons used in African conflicts are not made in Africa, the need for global action to control the trade in weapons and prevent weapons, especially small arms, reaching Africa’s conflict zones is brought into stark relief.”

A snapshot presented in the survey by a Kenyan doctor shows the true “cost of one bullet” after rebels shot and shattered the jaw of a young Congolese boy, the son of a diamond prospector. It took a year for the 17-year-old boy to save enough money to have a steel plate inserted into his jaw during a nine-hour operation that cost US $6,000.

War Resisters’ International was founded after the devastation of WW1 and has more than 80 affiliates in 40 countries. WRI provided international support for the End Conscription Campaign in South Africa the early 1980s and the organisation says the decision to hold its 2014 conference in Cape Town was made “in recognition of the 20th anniversary of South Africa’s transition from Apartheid to constitutional democracy”.

The first part of the War Resisters’ International ‘Embrace Nonviolence’ process was the establishment in 2012 of a network of African citizen’s groups using nonviolent methodology to counter the cycles of violence on the continent. These networks have since been developed through a series of bilateral visits as well as Internet contacts, including webinars.

In what is hoped will become the metaphor and symbol for the Cape Town conference (co-hosted locally by the Ceasefire campaign) with its theme, “Small Actions, Big Movements – The Continuum of Nonviolence”, a giant AK-47, specially designed by artist Ralph Ziman, is to be installed on the Grand Parade in front of the City Hall, where some 250 international delegates will attend the conference.

The “Broken AK-47”, wrapped in money, symbolises the devastation caused by the international arms trade, and it is hoped that the installation – which will be a flattened one-dimensional rendering of the broken weapon stuck to the asphalt parking lot – will be picked up by satellite and transmitted as a viral message not only promoting WRI but also Cape Town as the World Design Capital 2014.

Ziman, who now lives in Los Angeles and who directed the explosive 2008 film Jerusalema, left South Africa as a 19-year-old in 1983 to avoid conscription into the SADF.

For Terry Crawford-Browne, activist and journalist and member of War Resisters’ International, the image and the symbolism of Ziman’s artwork, when placed on the Grand Parade between the Cape Town Castle on the one hand, and the City Hall on the other, is enormous. The history of colonialism and conquest, he says, would have been very different had the Castle, fashioned out of rock quarried from Robben Island, not been built. The City Hall, built in 1906 to celebrate the “glory of the British Empire”, also symbolised imperial conquest.

The Cape Town organising group for the WRI conference is headed by Nozizwe Madlala-Routledge, who said that “[t]wenty years after our first democratic elections, South Africa still faces many problems, including street violence, small arms, xenophobia, economic injustice – an opposition to these ills are mounting with civil society using creative unarmed methods.”

She added that Africans had had enough of increased militarism throughout the continent “too often supported by powerful politicians” and were tired of “business as usual”.

Cape Town City Council has donated the use of the City Hall and various international or continental networks are offering support for the conference, which will officially be opened on Friday, 4 July by Cape Town Mayor, Patricia De Lille.

Speakers will include Ahmed Kathrada, Omar Barghouti (Palestinian Campaign for the Academic and Cultural Boycott of Israel, Palestine) Sahar Vardi (New Profile, Israel) Jenni Williams (Women of Zimbabwe Arise), as well as a representative of the Africa Diaspora Forum (yet to be announced).

Topics to be discussed will include the interconnections between various types of violence, from international war down to daily violence (domestic, street, hate crimes); how to use nonviolent action to construct durable democracy and a culture of human rights, how communities defend themselves nonviolently against extractive industries or mega-energy projects as well as how to use education for nonviolence and peace building.

Theme and discussion groups will probe issues such as military alliances and interventions, domestic violence, war profiteering, the militarisation of youth, dealing with the past as well as nonviolent community struggles and civil resistance.

While data complied by researchers of the Peace Research Institute in Oslo has shown that the last decade has seen fewer war deaths than any decade in the past 100 years, the continued cost of war, both in human lives and in terms of the economy, certainly when it relates to Africa and the “asymmetrical guerilla wars” on the continent, cannot be underestimated.

Ultimately the War Resisters’ International conference hopes to build networks of mutual support for nonviolent citizens’ action against the continuum of violence globally.

“We see this as a form of social capital for long-term peace building,” said Crawford-Browne. DM