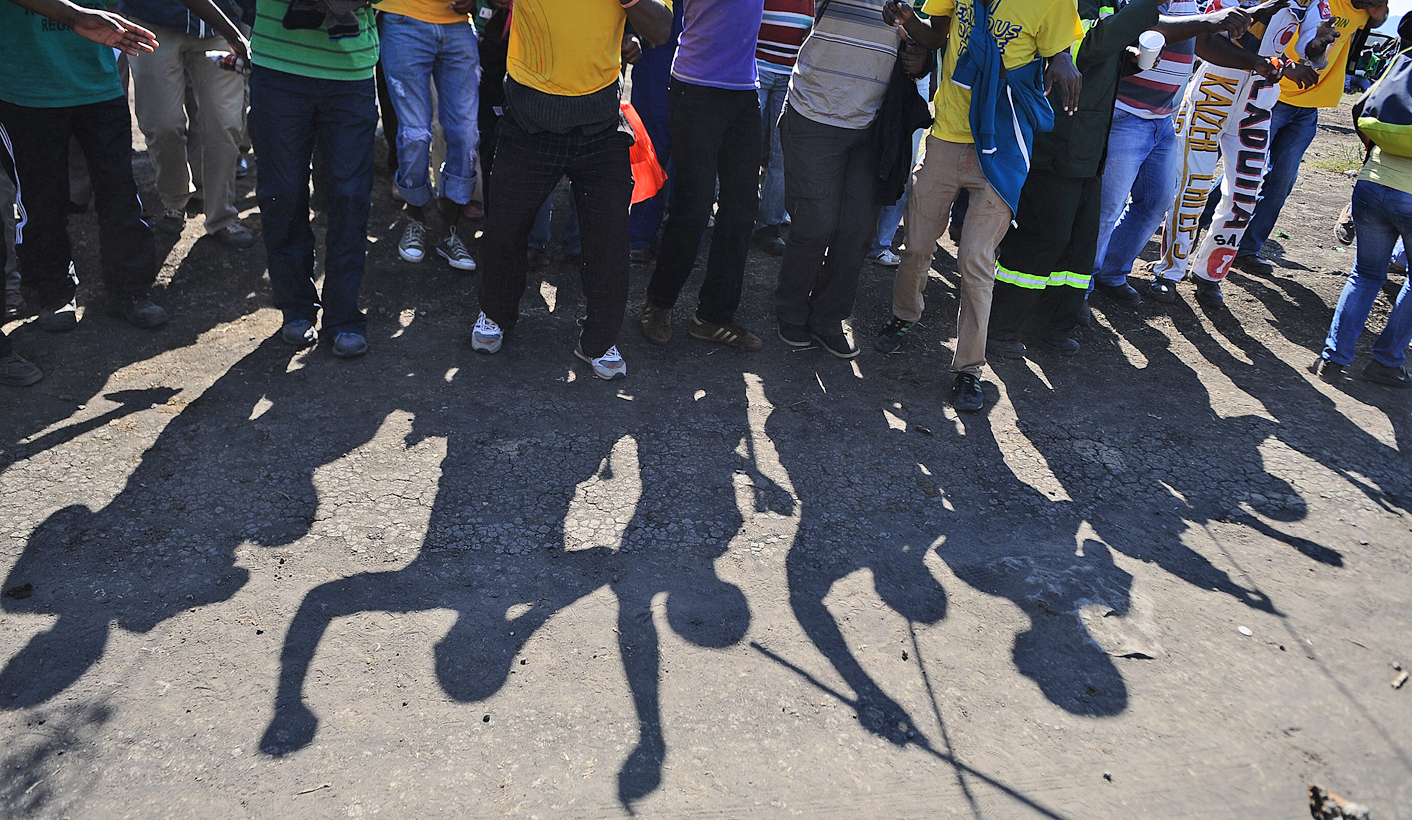 A group assisting the Association of Mineworkers and Construction Union (AMCU) made startling claims on Monday relating to the finances of Lonmin, Impala Platinum (Implats) and Anglo American Platinum (Amplats). As the wage negotiations continue, it’s clear there’s no love lost between the parties. By GREG NICOLSON.

In the wake of the Marikana massacre, the Alternative Information and Development Centre (AIDC) was commissioned by the Farlam Commission to look into Lonmin’s finances to see whether it could have met the wage demands in the 2012 strike. Speaking to media on Monday morning, AIDC said they realised the platinum company had been selling its metals below market prices for 10 years.

During the latest strike, which started on 23 January, AIDC, an economic research group focusing on alternative development options and sometimes assisting unions, decided to also look at Implats and Amplats. They claim that between 2004 and 2013 Implats forfeited R2.8 billion in revenue and Lonmin R1.9 billion by selling platinum below global market prices. Between 2006 and 2008, AIDC claims Amplats sold rhodium at 25% to 40% below market price, contributing to a whopping R9.9 billion in forfeited revenue in just three years.

AIDC director Brian Ashley estimated that had the companies been selling at the global market price, there would have been R15 billion more for wages and improving conditions around the mines. If some of that money had been channelled to increased wages over the period, miners would already be earning over R12,500, the group argued.

“The situation needs an explanation, especially considering the question of affordability in this strike,” said senior AIDC economist Dick Forslund, who conducted the research.

AIDC said they weren’t accusing the platinum companies of illegal activity, but said the companies must explain the practice of underselling. “All possibilities should be investigated. Their books are audited and we accept that, but we need to understand why there’s a systemic underselling, and illegality is a possibility,” said Ashley.

He mentioned the possibility of transfer pricing. Transfer pricing refers to the setting of prices when different parts of a single company, usually a large multi-national, trade between themselves across borders. It’s more generally known as a method of shifting profits to tax havens to avoid paying taxes. As US Senator Carl Levin told Bloomberg, “Transfer pricing is the corporate equivalent of the secret offshore accounts of individual tax dodgers.”

Ashley alluded to the possibility of transfer pricing, claiming some of the mining houses have subsidiaries in notorious tax havens of the Cayman Islands, Virgin Islands and Luxembourg. By selling minerals at a discounted rate to subsidiaries in a tax haven, companies could reduce their taxes in South Africa and increase overall profit by selling at market rates from the foreign entity. AIDC wants the companies to explain the situation and reveal the names of its companies to see that they’re not trading with themselves.

Responding to similar remarks made by Ashley last week, the platinum companies said there’s no truth in allegations of tax evasion. They said they don’t tolerate corruption or fraud and their tax activities are externally audited and also subjected to assessment from tax authorities. They suggested they might take legal action if the allegations continue.

Ashley said AIDC wasn’t scared of being sued and encouraged the platinum producers to engage on the issue and explain what’s going on. The group is confident their figures, gained from information in the companies’ own reports and global average market prices, is accurate. Forslund said the room for error might be R10 million to R15 million.

Implats spokesperson Johan Theron offered an in-depth response and said financial statements on exports, taxes due and foreign currency controls in repatriating money are all available for scrutiny. “Implats is a South African registered and listed company, and is largely owned by South Africans, which brings into question the rationale for such allegations. We don’t want to get bogged down in a public spat, but would like to point out how absurd these inferences are, hidden behind comments like: ‘in our opinion’ and ‘we are still connecting the dots’, which is their right to do, but also protects them from legal recourse for allegations they know to be false. Regardless, we have publicly reserved our rights on this matter,” said Theron.

He said Implats has consistently sold metal at a premium. “Our contracts are based on the average of the prior month’s actual trading price as determined on the London Metals Exchange (LME) and spot sales are made at a premium to the market. To complicate matters further, we also buy and toll-refine secondary material. The market trades daily and, in the absence of knowing when and how much metal the company has bought/sold, it is impossible to calculate relative market performance, specifically as this information is not publicly available. Such information is shared with our auditors and government regulators (Treasury), and we also regularly disclose our relative market performance. So, the inferences drawn from the extremely simplistic sales analysis published in the statement that AMCU’s advisors have issued is clearly wrong and misleading.”

Theron added that Implats sales and inventories are independently audited and measured each reporting period and analysed by over 20 multinational institutions and more than 40 independent analysts. Undersold metal wouldn’t go unnoticed, he said, inviting the AIDC to try to prove their claims to those involved in auditing the information. Theron said Implats was willing to talk to AIDC on their understanding of the market, but questioned the motives of releasing the information without first checking with the platinum producers. “A quick scan of the analysis for Impala clearly indicate an under-recovery of -R1.8 billion in one year (2008), followed by an over-recovery of +R2.1 billion in the following year (2009). This is clearly impossible and speaks volumes to the integrity/authenticity of the analysis,” finished Theron’s response to the claims.

While AIDC was explaining its research, the Labour Court decided to strike AMCU’s application to prevent the companies from communicating directly with employees off the roll for its lack of urgency. The platinum companies believe they should be able to directly inform employees of their wage offers and continue to gauge their willingness to return to work. “The companies have been inundated by calls from employees seeking information, and will now continue to communicate with employees on a regular basis,” said the platinum producers in a joint statement on Monday. AMCU argued that by communicating directly with workers and bypassing the union, the companies seek to divide workers, and it could result in increased violence.

Negotiations continue after new Mineral Resources Minister Ngoako Ramathlodi established a government task team to work with stakeholders on resolving the issue. AMCU is said to be discussing the latest offer from the employers, but the signs aren’t positive for an agreement. The AIDC, who have been working with AMCU, accused the platinum companies of negotiating in bad faith and continuing to repackage the same rejected offer. The companies strenuously deny any allegations of bad faith and say they are attempting to end the strike and doing the best they can. DM

Photo: Scores of Lonmin platinum mine workers dance during a wildcat strike near the scene of the Marikana shooting last year that left 34 miners dead, Rustenburg, South Africa, 14 may 2013. EPA/STR