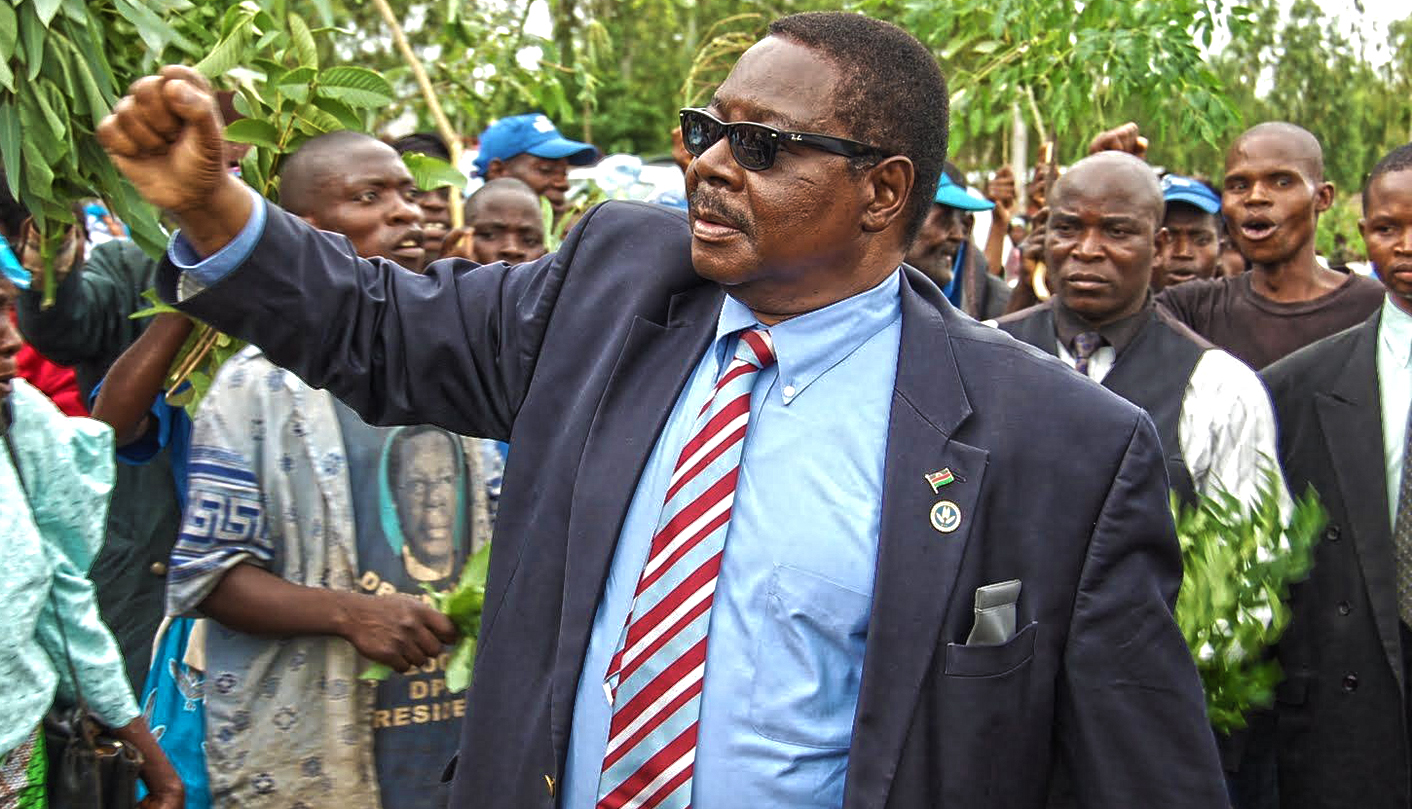 Malawi’s new president has a lot on his plate: rooting out corruption, fixing a broken electoral system and, above all, sorting out the stuttering economy. But before Peter Mutharika can get down to business, he’s got to prove that he really is his own man and not just Bingu’s little brother, with all the negative connotations that association carries. By SIMON ALLISON.

Move over, Joyce Banda: Malawi has a new president. On Saturday, Peter Mutharika was declared the winner of the chaotic presidential election, and on Sunday Mutharika was sworn in – the unseemly haste prompted by the failure of Malawi’s constitution to allow for any kind of transitional period between leaders.

Not that Mutharika would have been bothered by the rush. He’s been waiting for this moment for quite some time, groomed by his brother and former president, the late Bingu wa Mutharika, for the top job. His ambitions have already been foiled once, when Bingu died suddenly in office: the efforts of a clique of senior ruling party officials to maneuver Peter into power and subvert the legal succession were thwarted by a stubborn Joyce Banda, and a military that understood its constitutional obligations. (For his alleged role in these events, Peter Mutharika was charged with treason by Banda’s administration. These charges are now likely to disappear).

Never mind. Two years under Banda clearly convinced enough of the electorate that actually Peter Mutharika was the right man for the top job. His Democratic People’s Party received 36.4% of the vote, compared to 27.8% for the runner-up Malawi Congress Party, and a dismal 20.2% for Banda’s People’s Party. This is by no means an overwhelming endorsement of Mutharika. It’s not even a majority. But it’s enough, thanks to Malawi’s winner-take-all electoral system, to give him at least five years to prove himself.

As for that electoral system – well, the less said about it the better. Under-staffed, under-resourced and under-prepared, the Malawi Electoral Commission (MEC) really struggled to pull off a transparent and credible election. There were some serious difficulties in in the provision of ballots, and irregularities in counting them too. A crash of the MEC’s computer systems fuelled rumours that the results were being hacked. It didn’t help perceptions when, just a few days into the count, President Joyce Banda said the whole thing was so badly flawed that she was calling the entire election off and organising a new one (a court subsequently ruled that she did not have the authority to do so).

Having said this, the MEC has been praised by international and domestic observers alike for making the best of a bad situation. And it was hard not to feel sorry for MEC chairman Maxon Mbandera when he teared up as he announced the final results on Saturday night. Mbandera has been on the receiving end of a lot of vitriol over the past couple of weeks, much of it undeserved and due to circumstances beyond his control, so he can be excused a few tears. But the result he announced was accepted by all the main political parties, and tallied with the estimates produced by independent election observers. Despite the problems, Mutharika’s win was genuine.

Attention turns now to the new president. “I promise peace and security to this country. Malawi is a beautiful country that has to be protected,” he said at a press briefing immediately after being sworn in at the High Court in Blantyre. He had to recite the oath twice, forgetting to place his hand on a Bible the first time round. In an apparent breach of protocol, Joyce Banda did not attend. Mutharika, however, was magnanimous, promising to work with the defeated opposition candidates, noting that he couldn’t fix Malawi on his own. “It’s obvious we have been facing serious problems in this country that no single person can do it. This country is almost on the verge of collapse…but with your help and God’s help we will be able to do it.”

President Mutharika the Second is a lawyer by training, and a highly trained one at that, with degrees from the University of London and Yale. As a professor, he’s taught at some of Africa’s finest tertiary institutions, including Haile Selassie University in Ethiopia; the University of Dar Es Salaam; and Makerere University in Uganda. His specialties are international justice and constitutional law. Mutharika spent much of his career in America, however, where his three children are all practicing lawyers.

James Woods, consultant on African security and development issues, and family friend of the Mutharikas, told the Daily Maverick that Mutharika has always been committed to Malawi, and would often drop in on students in the Malawian diaspora to offer advice and persuade them to return home with their much-needed skills. “He is a person who is really caring. He’s very open to listening to opinions and ideas, so if you have something beneficial, he’d be very open to listening. It’s not about his say, it’s about what is the best thing that can be developed and implemented. He’s not caught up in the whole status issue. He’s very intellectual, very sharp…you can sit down and discuss anything with him. The most fascinating thing is that Professor Mutharika will give you time, even as a young person.”

It was through his older brother that Mutharika got roped into politics, and back into Malawi. He advised Bingu on his successful 2009 re-election campaign, and was rewarded with a cabinet post, as minister of justice and constitutional affairs. This became minister of science, education and technology, and then minister of foreign affairs. The promotions were a very public affirmation of President Bingu’s faith in his little brother (although he’s really not so little, turning 74 this year).

By 2011, President Bingu had made it clear that he expected Peter Mutharika to succeed him as the DPP presidential candidate in 2014, much to the chagrin of other senior party figures, including a most disgruntled Joyce Banda, who took this as her cue to leave the party. The move was also widely criticized both by opposition politicians and civil society groups, who accused Bingu of nepotism; and more damningly, of “doing a Putin”, i.e. evading term limit restrictions by appointing a trusted placeholder.

Bingu’s death, midway through his second and final term, put paid to these grand plans, and also to the ominous turn towards autocracy which Bingu was pushing in his final years. Bingu was succeeded by Joyce Banda, who wasted no time in undoing some of Bingu’s more damaging measures: she opened up political space again (resulting in this past election being Malawi’s most fiercely contested), and lifted restrictions on civil society. She also enticed donors back into the country (40% of Malawi’s budget comes from international aid), and eased restrictions on foreign exchange.

Meanwhile, Peter Mutharika was planning his 2014 campaign. He traded on the Mutharika name, which, contrary to international perceptions, Bingu had not thoroughly trashed. In fact, many Malawians remember Bingu’s first term with great fondness. He was a steady hand on the tiller, and grew the economy rapidly. Under his watch, Malawi enjoyed food security for the first time in decades. It was only in his second term that his decisions became more erratic, and the country suffered as a result.

Peter Mutharika also took advantage of Joyce Banda’s struggles, primarily with corruption (the infamous Cashgate scandal, which is still unresolved, may still come back to haunt her) and with the economy. Her economic reforms may have attracted investment but they were wreaking havoc with the kwacha, causing extreme price fluctuations and a general increase in the cost of living.

“DPP certainly had the resources to carry out a vibrant campaign. There was also the factor of contending with the lame duck presidency of Joyce Banda, which put DPP in pole position. They have leverage in the north where there was greater appreciation of Bingu’s policies. These factors played a pivotal part in the turnaround of DPP’s fortunes,” said Billy Mayaya, a prominent Malawian human rights activist, in an interview with Daily Maverick.

Now that Peter Mutharika has been sworn in, all eyes will be watching to see what kind of president he becomes. While his brother’s politics will doubtless have influenced the new leader, it remains to be seen whether we can expect Peter’s administration to be more like Bingu’s successful first term, or his more ominous second.

The smart money, however, is on the former. “There is a likelihood that Peter Mutharika will continue his brother’s policies particularly as they relate to infrastructure development, agricultural subsidies for rural farmers. As a lawyer, I expect him to be more measured in his approach and that Malawi’s democracy will benefit from his legal insight. So civil society may thrive as a result,” commented Mayaya.

Others close to Peter Mutharika suggest that he is well aware of his brother’s shortcomings, and determined to prevent a repeat performance. There is evidence to back this up. One of Mutharika’s closest advisors, the lawyer Allan Ntata, recently released a book frankly examining some of the things Bingu did wrong, showing that at least some of the people surrounding the new president have learnt the necessary lessons.

The bottom line, really, is that Peter Mutharika is not his brother. And that Malawi today is in a very different place to where it was when Bingu passed away so suddenly. By most accounts, the new president is his own man – now he needs to prove it and, in doing so, deliver to Malawians the peace, stability and prosperity they deserve after the last few years of turmoil. DM