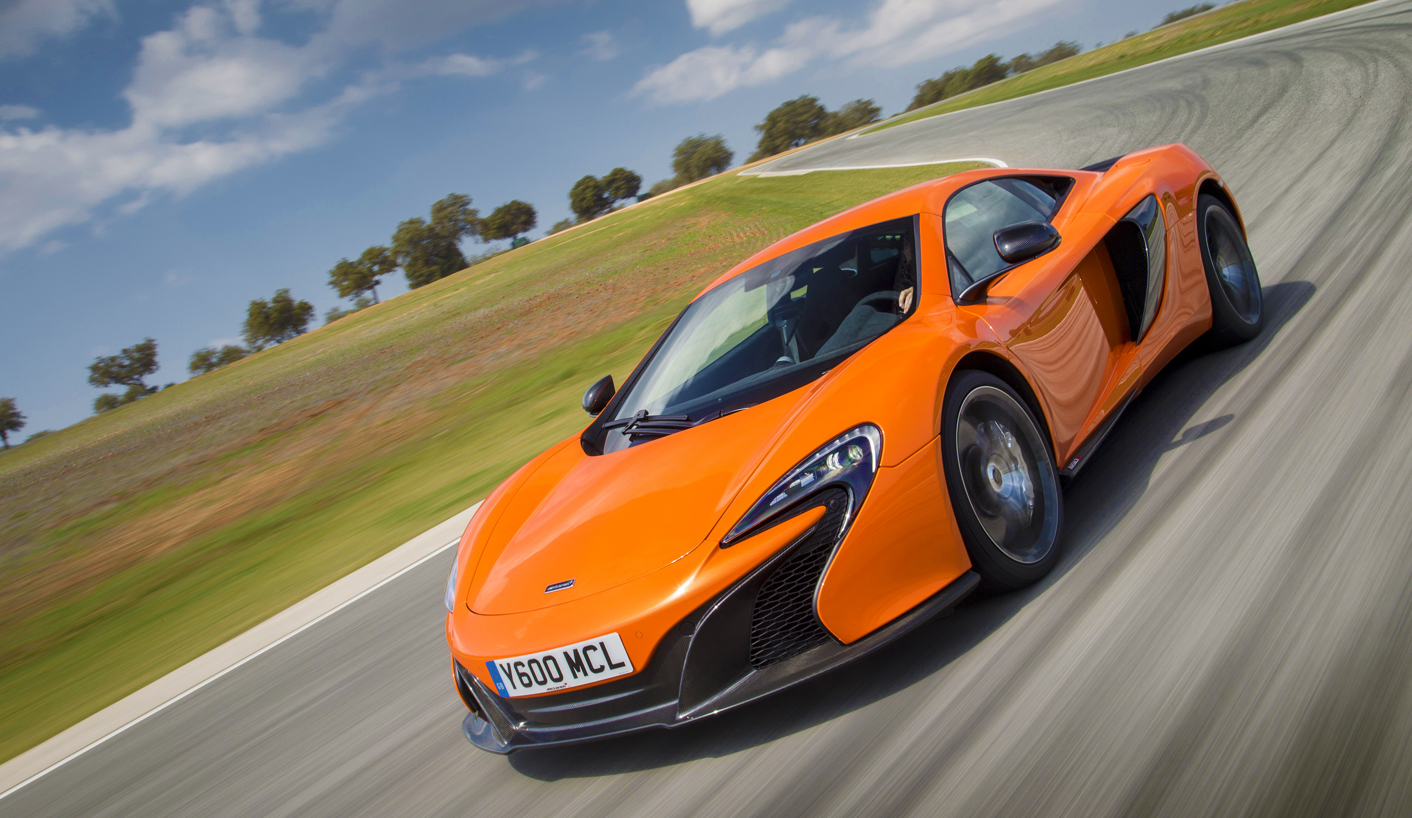 When McLaren launched the MP4-12C supercar in 2011, it created huge expectations. Given McLaren’s Formula 1 credentials, and the legacy of the radical1990s McLaren F1 supercar, the MP4-12C just had to be something special. In reality, the car was sleek, quick and advanced. But it lacked vital soul and engagement. Enter the 650S: the car the 12C should have been from the outset. By DEON SCHOEMAN.

For most petrolheads, McLaren is a world championship-winning Formula 1 team that builds and campaigns F1 racing machines. But McLaren also creates sports cars, the most famous of which remains the legendary 1990s three-seater F1 supercar designed by South African Gordon Murray.

While the F1 is a sports car legend, McLaren’s more recent road car efforts haven’t exuded the same sense of greatness. More specifically, the first of McLaren’s 21st Century supercar efforts, the highly anticipated MP4-12C, simply didn’t provide the kind of rush its ardent would-be fans had been hoping for.

It’s hard to pin down just why the 12C didn’t live up to expectations. Subjectively and emotively, the shape is pretty rather than arresting, with an aesthetic approach too generic to be truly arresting. Yes, it turns heads, but not in the same desire-infused way as a Ferrari, or a Lamborghini.

Dynamically, the 12C is quick, even by supercar standards – and so it should be, given its 460kW twin-turbo V8, and its slippery, lightweight composite body. But perhaps the 12C was always too advanced, too sorted, to engage the driver. Whatever the reason, it lacked outright thrill appeal.

Enter the 650S – a car that looks a whole lot more exciting than the sleek but strangely anodyne 12C. And yet, much of what’s under the skin of the 650S, first revealed at this year’s Geneva Motor Show, is derived from the 12C.

There’s the same ultra-light, ultra-stiff carbon fibre tub, with aluminium subframes at either end providing the mounting points for the race car-pedigreed double-wishbone suspension. And mid-mounted, directly behind the passenger cell, is a variation on the same 3.8-litre twin-turbo V8.

Despite those similarities, the 650S looks like a completely different car. If you’ve seen images of McLaren’s groundbreaking P1 hypercar, you’ll recognise some of that car’s extrovert lines in the somewhat less radical 650S.

It’s the front end that really changes the game. While the 12C was plain-Jane sleek, the 650C exudes aggression, thanks to the symmetrical swirls that link the multi-element LED headlights to the snarling cooling ducts directly below.

It’s no longer merely pretty, or nice: it’s low-slung and menacing, with the front carbon-fibre splitters threatening to snag even the mildest bumps.

Behind the slim spokes of the wheels, the big brake callipers now employ carbon ceramic technology as standard.

The rear is also more brutal than the 12Cs, with a pronounced diffuser that’s more race car than road machine. A transparent engine cover allows a full, and glorious view, of the V8 power plant, so encased in shiny carbon fibre that it’s as much art as it is engine.

The twin-turbocharged V8 has undergone some substantial tweaking, including different pistons, a new cylinder head, revised valves and improved cooling. A new exhaust affords better breathing and greater aural freedom, while the engine electronics have been remapped to make the most of the mechanical changes.

As a result, the V8 now pumps out 478kW of maximum power, combined with 678Nm of torque: 18kW and 18Nm more than the 12C. The differences aren’t huge on paper, but with a kerb weight of just 1,330kg, the power-to weight ratio climbs to an astonishing 359 kW/ton.

Like the 12C, the gearbox is a seven-speed dual-clutch transmission, allowing rapid and seamless cog swaps, but the 650S benefits from improved calibration, resulting in quicker and smoother shifts.

The visual drama created by opening the McLaren’s scissor doors remains a highlight, but clambering over the wide sill into the deep-set, hard-backed carbon bucket seat requires a little practice if any semblance of elegance is to be retained.

Once ensconced, the cabin exudes an even stronger sense of occasion than the exterior, despite the fact that much of the basic layout has been carried over almost unchanged from the 12C.

The all-Alcantara upholstery and carbon fibre trim creates a bespoke and racy aura, with all the controls and instruments within easy reach. Of specific note is the ‘Active’ button, which glows an angry orange when pressed, and allows access to the McLaren’s variable suspension and drivetrain modes.

Suspension and drivetrain can be set to one of three modes – Normal, Sport And Track – independently, allowing the driver to find a suitable combination of damping and performance. Regardless of setting, the active damping is noticeably stiffer in the 650S than the 12C, but without losing vital compliancy, while the drivetrain demands to be sampled in Sport mode at the very least.

In fact, Normal feels like Slumber mode by comparison: the exhaust note is muted, the gearshift is slick but not particularly incisive, and the engine’s urge is delivered with a certain restraint that always hints at more.

Switch to Sport, and the exhaust gets a deeper, more urgent throb, the gearshifts gain a percussive incisiveness, and the throttle response is crisper. Opt for Track, and that growl becomes a roar, the cog swaps are race-car rapid, and the accelerator becomes razor sharp.

McLaren might not admit it in so many words, but it’s obvious that the real reason behind the 650S’s creation is to address the ongoing criticism that the 12C is too benign, too generic and ultimately too uninvolving to woo supercar owners away from their Porsche 911 Turbos or Ferrari 358 Italias.

So, the 650S promises to up the dynamic and emotive ante – and it does, with that extra power making the car feel livelier and edgier. But it’s not so much the power as it is the way it is delivered, and the way the chassis reacts to it, that sets the 650S apart from its sibling.

Driven with verve, it demands more care, more circumspection, and while the limits are higher, even approaching them is more challenging. In Normal mode, it’s amicable enough, but in Sport and Track modes, you need plenty of seat time to build the confidence needed to give it a decent tonk.

No, the 650S has not been turned into a monster, but the driving experience is a lot more immediate, more engaging than the 12C. It’s a real supercar now, with all the capability that title suggests, but with a less easy, and therefore ultimately more rewarding, path to exploring its full potential. In full flight, the 650S is not a car to be trifled with unless you have courage and talent.

As for straight-line performance, the 650S is fast – as one would expect it to be. At 3 seconds dead, the zero to 100km/h dash is over almost before you’ve realised that it’s begun. Perhaps even more impressive is the 0-200km/h dash, despatched in 8.4 seconds. Top speed is 333 km/h, while the quarter-mile time is in he mid-10 second bracket.

Interestingly, the 12C’s straightline stats aren’t far off those of the new 650S, but it never seemed to communicate its dynamic message with the intensity of the new McLaren. In the 650S, you feel car and driver being flung down the road with a ferocity that feels more jet fighter than car. The acceleration is relentless, and even those carbon ceramic brakes feel barely adequate when you arrive at a corner far quicker than expected!

With hindsight, the McLaren 650S is the car the MP4-12C should have been from the very beginning. And no, it’s not just a hot-rodded 12C. The package is more visually and dynamically convincing because it hones, flaunts and fully expresses the power and aggression the 12C only alludes to.

The visual changes make a real difference, adding the muscle and the menace that the 12C so desperately needed. But it’s the immediacy of the 650S, the real involvement it demands of the driver, that makes it the real supercar deal. DM