Clive Derby-Lewis and ‘Prime Evil’: Will the cells be unlocked? 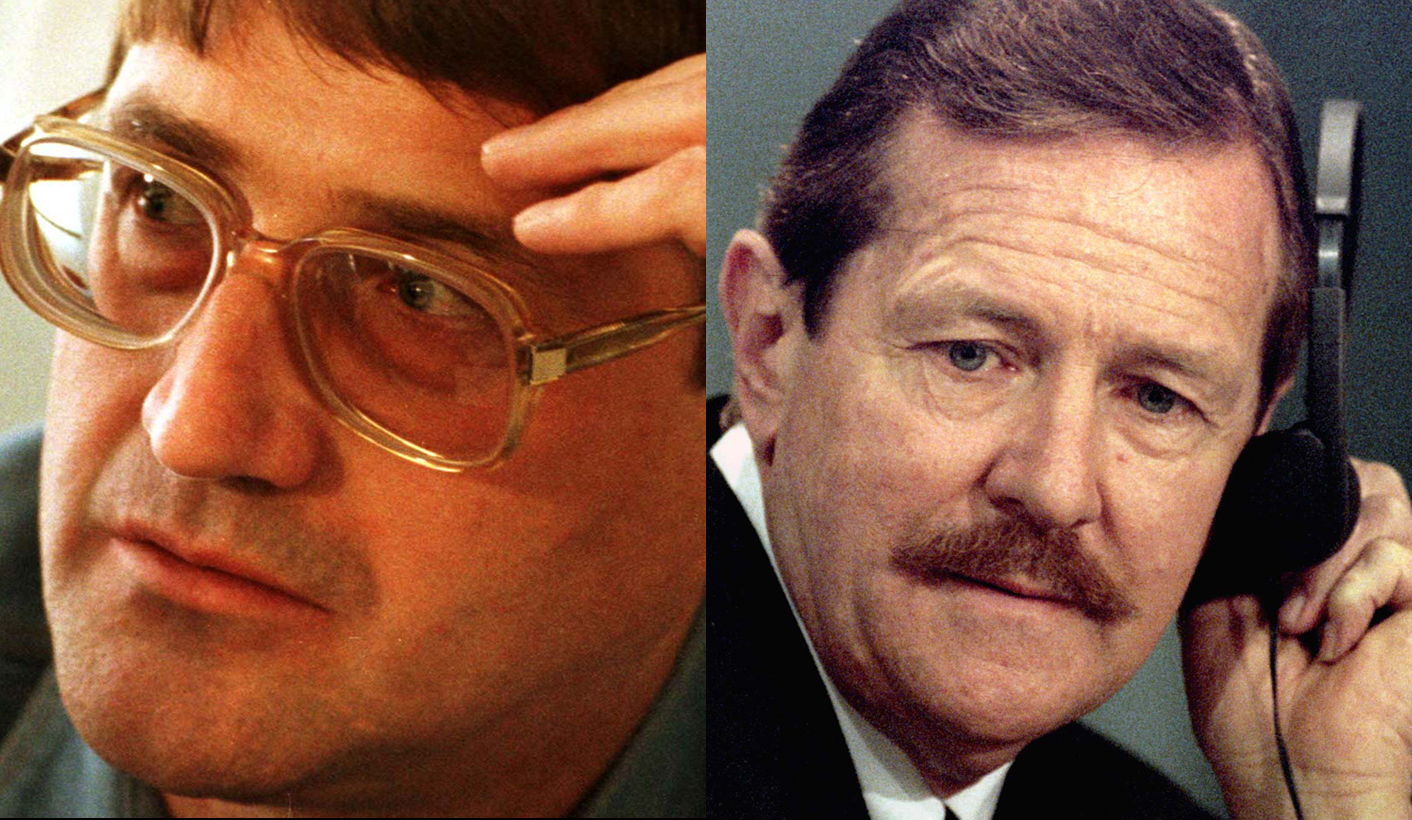 Spare a thought for the new Minister of Justice and Correctional Services, Michael Masutha. In addition to the already weighty portfolio he has just been handed, Masutha is faced almost immediately with a significant decision to make. The North Gauteng High Court ruled on Wednesday that the minister must look into whether to release Vlakplaas death-squad leader Eugene De Kock within the next 30 days. It’s being reported that Chris Hani’s killer Clive Derby-Lewis would probably be granted parole at the same time. Derby-Lewis has served 21 years of a 25-year sentence; De Kock, 20 of a 212-year sentence. Whatever Masutha decides, it could be a political hot potato. By REBECCA DAVIS.

Judge Thokozile Masipa, it appears, is not spending the month-long break in the Oscar Pistorius trial kicking back. On Wednesday Masipa granted an order which gives the new Correctional Services Minister under a month to decide whether infamous Apartheid killer Eugene De Kock should be released from prison on parole.

This forces Masutha to make a decision that his predecessor fudged. Previous Correctional Services Minister S’bu Ndebele was recommended by the National Council for Correctional Services to grant De Kock parole, but failed to make a call on it before his Cabinet term expired. It’s not altogether surprising that Ndebele dithered, particularly as he approached the end of his post. The minister who signs off on De Kock’s release risks finding themselves unpopular in many quarters.

‘Prime Evil’, as De Kock was dubbed, has spent 20 years in prison since being arrested in May 1994 and sentenced in September 1996 to 212 years imprisonment for crimes including murder, culpable homicide, kidnapping and fraud.

De Kock has repeatedly cited what is sometimes known as the Nuremberg Defence in his application to be granted parole: that he was simply carrying out orders from above while commanding the Vlakplaas death squad under Apartheid. In an affidavit submitted in support of his application, De Kock said: “I am the only member of the South African Police Service that is serving a sentence for crimes which I had committed as part of the National Party’s attempt to uphold Apartheid and fight the liberation movements… I would never have committed the crimes if it was not for the political context of the time, and the position I was placed in, and in particular the orders I had received from my superiors.”

Masutha’s headache doesn’t stop there. City Press reported on Wednesday that if Eugene De Kock is to go free within the next month, it’s likely that Clive Derby-Lewis will do likewise. The newspaper quoted a source as saying “[T]he decision to grant both men parole simultaneously was made by President Jacob Zuma”. If true, this makes Masutha’s decision a double-whammy, particularly given the highly significant place occupied by Chris Hani in the pantheon of Apartheid martyrs. Both Derby-Lewis and his co-conspirator Janusz Walus were initially sentenced to death for the 1993 murder of Hani, subsequently remitted upon the abolition of the death penalty in South Africa.

Both De Kock and Derby-Lewis have previously voiced the desire to express remorse to the family members of their victims. In both cases, it has been clear that the pain experienced by the families is still raw, which adds an additionally torturous dimension to Masutha’s decision. In the run-up to the 20th anniversary of Hani’s killing (20th April 2013), Derby-Lewis asked to meet Hani’s widow Limpho. The New Age reported at the time that Derby-Lewis’s attorney Marius Coertze said: “He is very sorry about the whole thing”. It appears that Limpho did not consent to the meeting.

For his part, De Kock wrote a 2012 letter to the family of ANC lawyer Bheki Mlangeni, killed by one of De Kock’s bombs in 1991, begging for forgiveness. “Your forgiveness will mean a lot to me, but it can in no way wash away the pain I have caused,” he wrote. The Star quoted Bheki’s mother Catherine Mlangeni as saying he should rot in jail, while his widow said: “Whether the government releases him or not, it will never bring back my husband”.

De Kock is now 65, while 78-year-old Derby-Lewis’s health is fading. According to Derby-Lewis’s wife Gaye, the 78-year-old was diagnosed with terminal lung cancer in April this year, with chemotherapy scheduled for May. Medical parole has been denied to him twice, following applications in 2011 and 2012.

Questions will certainly be asked about whether the men’s safety can be assured outside prison. Derby-Lewis is being kept at the Kgosi Mampuru Correctional Centre, where he has twice been attacked by fellow prisoners. In the most recent incident, in late March this year, Derby-Lewis was reportedly stabbed in his back with a piece of glass, together with Hani assassination co-conspirator Walus. A month previously, he “suffered lacerations to the head and hand” after being attacked by another prisoner with a spoon (presumably sharpened).

“It is safer to go to war than to be in the Kgosi Mampuru prison,” his lawyer Marius Coertze said at the time.

Minister Masutha will be aware that both the ANC and its alliance partners have previously spoken out strongly against the potential of parole for both men.

In April this year, 2,500 members of the South African Communist Party marched in central Pretoria to commemorate the 21st anniversary of the murder of Hani, a former SACP secretary-general. But the march had an additional motivation: to demand that Derby-Lewis be kept behind bars.  SACP spokesperson Alex Mashilo described Derby-Lewis as “a convicted murderer, who has no remorse and is unrehabilitated”, and who has “only told the partial truth about the assassination of Hani”.

The latter is a claim that has been made repeatedly by the SACP, who maintain that Derby-Lewis did not tell the full truth about Hani’s killing when he appeared in front of the Truth & Reconciliation Commission. Cosatu has also previously backed SACP’s position that Derby-Lewis’s release on parole should be conditional on his full disclosure of the circumstances around Hani’s murder. Conspiracy theories continue to circle about Hani’s killing; at an SACP 2007 congress, Gwede Mantashe reportedly joined in the song ‘Thabo Mbeki, Tell Us Who Killed Chris Hani’.

On the other side of the political spectrum, also in April this year, rightwing Afrikaner group Front Nasionaal staged a small march on the offices of the Department of Correctional Services to demand the release of Derby-Lewis. Their petition cited the length of time served by Derby-Lewis in prison; that he is sick and old; that he is under threat from other inmates; and that the fact that he indicated his desire to meet with Hani’s widow means “his rehabilitation is complete”.

The group has not expressed their desire for Derby-Lewis’s release in political terms; they are careful to stick to a human rights discourse. But every now and then the mask slips a little. The group carried out another protest in early May. “During this action a Communist flag was set alight as a symbol of our protest against the non-co-operation of the Department of Correctional Services in this process,” they reported afterwards.

Prior to Wednesday’s court decision, the Front Nasionaal announced that they would be carrying out a further protest action this Friday, which would include the laying of a wreath in Church Street to commemorate the 19 victims of a 1983 car bomb. It’s not hard to read between their lines: they clearly feel a sense of injustice about the ongoing incarceration of Derby-Lewis’s ilk when former MK fighters who took lives during Apartheid are walking free.

It will be interesting to see what the DA’s position on the potential release of both men will be. In 2010, when it seemed possible that Derby-Lewis could be released on parole, the opposition released a statement calling for Derby-Lewis’s application to be rejected “until he has served at least 25 years of his life sentence”. Erstwhile Shadow Minister for Correctional Services James Selfe said that the fact that Hani’s murder had brought South Africa to the precipice of civil war “constitutes an aggravating circumstance that should be taken into account in rejecting his parole application”.

In the same year, the DA also insisted that De Kock should stay behind bars. “Releasing De Kock could never be in the public interest,” Selfe said at the time.

Minister Masutha’s predecessors in his role have adopted a tough stance towards Derby-Lewis in particular. In November 2008, Correctional Services Minister of the time Ngconde Balfour had some harsh words for Hani’s killer. “I will tell you, you will not go out [of prison],” Balfour said. “Clive Derby-Lewis…you can go to hell. You’re not going to go out until you do your time, it’s as simple as that.”

A number of prominent black commentators have recently made the case that De Kock and Derby-Lewis should be freed, however. Writing in February for Business Day, Jacob Dlamini suggested a pragmatic motivation for granting De Kock parole: “He can use his extensive network from the past to help the prosecuting authorities find missing bodies and to compel criminals to come clean. He can use his vast knowledge of how the security police functioned in the past to help close many cases.”

In late April, meanwhile, Pretoria News executive editor Fikile-Ntsikelelo Moya wrote a powerful op-ed calling for Derby-Lewis’s release. “Denying a man parole solely on the grounds of who he and his victim is, is unfair to all other families that have seen the killer of their loved one released on parole,” Moya wrote. “The most important reason Derby-Lewis must be released is that it would fit with what Hani lived and died for.” DM