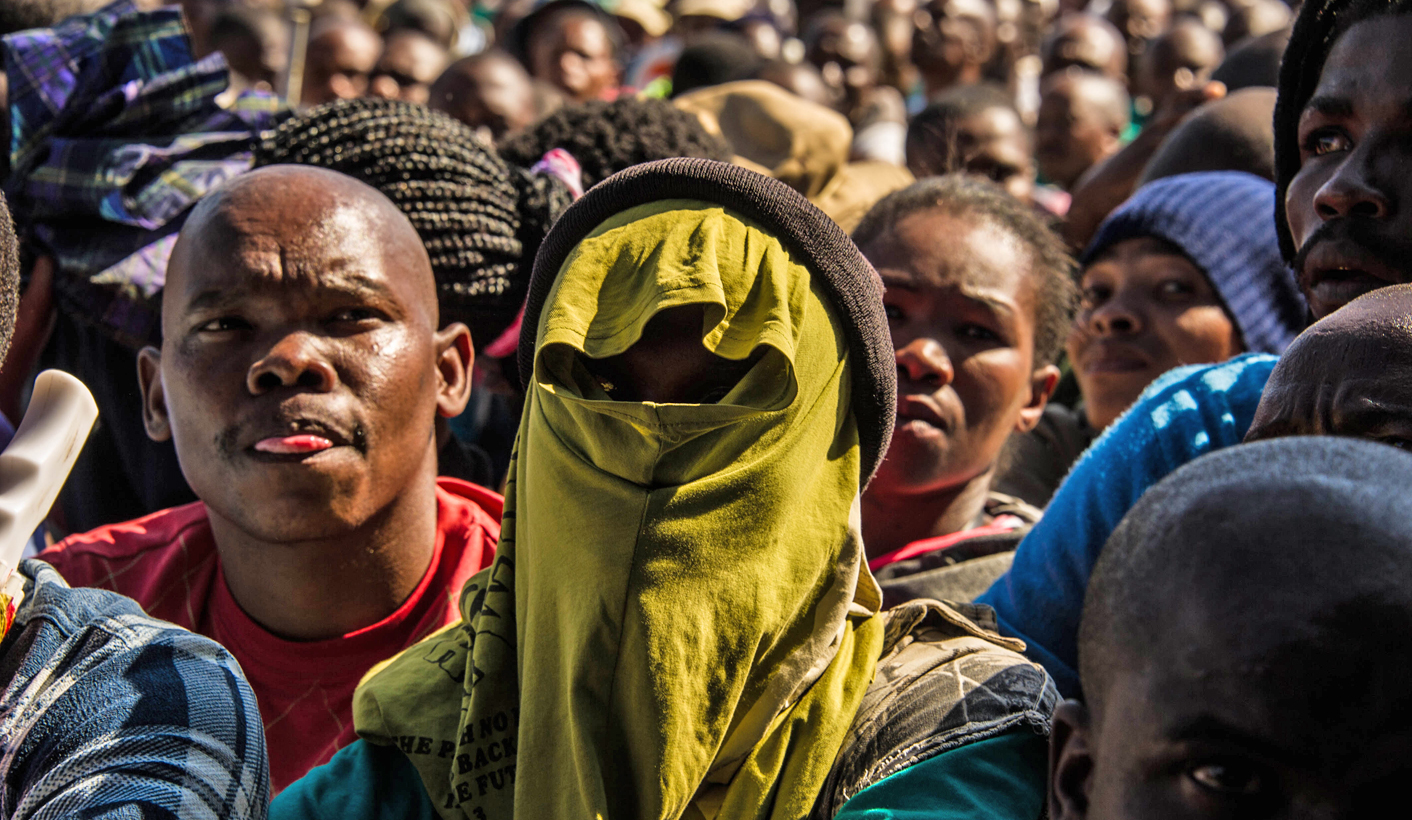 The strike in the platinum sector is just shy of hitting four months, and the turmoil is reaching crescendo. Stakeholders remain outside the gate of resolution as a clamour of voices from competing forces continues to take us down the road to nowhere. As mining communities suffer, food parcels are deployed, a “hit list” circles, and companies play their hand, GREG NICOLSON & THAPELO LEKGOWA try to join the dots. Finally, they’ve taken us back to the bargaining table.

There’s hope that there might be an end in sight for the strike after, on Tuesday afternoon, the parties had agreed to mediation by the Labour Court. The talks begin on Wednesday and will last for up to three days. The mediation will be overseen by Judge Hilary Rabkin-Naicker, who presided over the attempt by the Association of Mineworkers and Construction Union (AMCU) to interdict Lonmin, Impala Platinum and Anglo American Platinum from communicating directly with employees, sending SMSes and other correspondence, about the strike.

Court proceedings stopped on Tuesday as lawyers for the parties entered into discussions with Rabkin-Naicker and it’s understood the interdict attempt will be temporarily suspended during the mediation. The CEOs of the three platinum companies issued a joint comment: “Reaching an affordable and sustainable agreement with AMCU would be in all of our interests, and that remains our preference. We remain committed to ongoing dialogue with AMCU and other stakeholders to find a way to end the strike. The companies welcome the intervention of the Labour Court.”

Negotiations have been stalled since the producers’ latest offer in late April of R12,500 take home wage, including allowances, by 2017. AMCU accused Anglo American Platinum (Amplats) of bad faith, claiming they inflated cost projections on the union’s demands by up to R500 million by including almost 5,000 retrenched workers in their calculations. The union rejected the offer. Those negotiations were held privately, long after the Commission for Conciliation, Mediation and Arbitration (CCMA) process broke down.

Since then, there’s been no progress. The situation is dire, Lonmin CEO Ben Magara told media on Monday. “The company has been bleeding, and there will come a point when that bleeding means death.” Lonmin has dismissed 235 essential services staff that weren’t coming to work and whose jobs weren’t protected under the strike.

The producers still argue the demands are unaffordable in a lacklustre platinum climate. Lonmin believes many workers want to get back to the mines and it has resumed operations. Intimidation is what’s preventing workers from returning, says Lonmin, which won’t release work attendance numbers. AMCU’s president Joseph Mathunjwa says the bosses are too arrogant and greedy to pay an increase they can afford. He’s also called on the state to play a greater role in mediation and often stresses the need to reform colonial-like pay and conditions in mining.

While negotiations stalled and Lonmin tried to get employees back to work, pitting striking workers against those who wanted to resume their duties, intimidation and violence in Marikana was reported to have increased, with reports of fear and desperation pumping through the community.

According to a City Press report this weekend, a list of employees who have returned to work at Lonmin is allegedly being used in Marikana to target strikebreakers. The report said the small groups of striking miners who patrol the area and try to prevent people from going to work were using the hit list. City Press cited unnamed sources within AMCU, the National Union of Mineworkers (NUM) and police as confirming the existence of a hit list. NUM regional secretary Sydwell Dokolwana also said it existed and alleged that AMCU members announced they wanted to kill strikebreakers.

But finding any trace of it proved difficult this week and Daily Maverick wasn’t able to find anyone who had seen such a list. Lonmin has said some details from responses to who might come to work are recorded but the information is not available to unions and it knows of no breach of confidentiality. The SAPS say they don’t know about a hit list and AMCU claims the allegations are part of a smear campaign against its struggle for a living wage.

Daily Maverick spoke to miners in Marikana and no one was able to confirm the list’s existence, yet many had heard the reports from the media and were trying to verify them. AMCU leadership at a local level denies any knowledge of the list. “The reporter who wrote on the hit list might have been totally misinformed and taken for a ride by NUM, as the article claims NUM showed the list to City Press,” said AMCU member and strike leader Bob Nduda.

“The hit list that is being mentioned, we know nothing about it. We don’t know of any workers that have so far planned to go back to work. As workers we know we are united and stand together in this strike,” added L. Nongwanya, a mineworker and AMCU member.

“This hit list story is made up and can only be made up by our old union [NUM]. It is a strategy for them to work their way back into recruiting workers. It is a dirty trick and giving a bad name to AMCU,” Tholakele Dlunga also claimed.

It’s been a dirty week. Amplats CEO Chris Griffith apologised for “inappropriate” comments, when while defending the R17.6 million he took home last year he said, “Am I getting paid on a fair basis for what I’m having to deal with in this company? Must I run this company and deal with all this nonsense for nothing? I’m at work. I’m not on strike.”

The media then turned to AMCU’s Mathunjwa as The Star claimed while miners are in poverty, he is “living in opulence” with cars worth around R900,000 and three properties with bonds totalling R1 million.

The cumulative furore has led to debate on the nature of the mining industry and executive remuneration. It’s also prompted the Gift of the Givers foundation to intervene, offering food parcels to the community at Anglo’s Khuseleka mine where it has found an overwhelming need for help.

While many will be hoping the Labour Court mediation brings relief to the communities, it’s clear that to avoid a cycle of damaging strikes there needs to be meaningful reform across the sector. It’s symbolic that as AMCU and the platinum companies were locked in the Labour Court in Johannesburg on Tuesday, many of the 270 miners arrested for the violence in August 2012 appeared in court in Ga-Rankuwa. Their case was, once again, postponed. DM