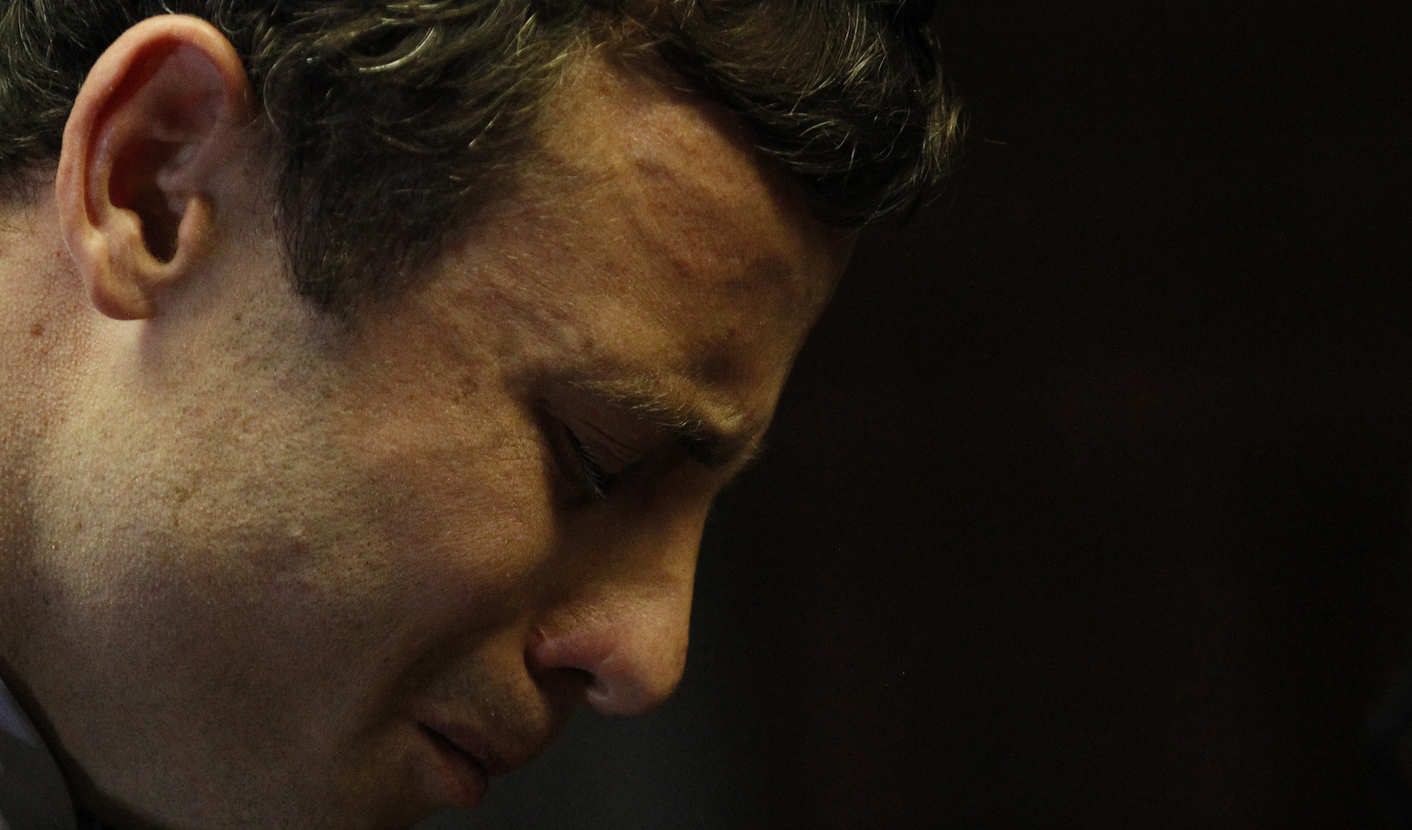 This is the 33rd day of the Oscar Pistorius trial, and it’s the one on which the murder-accused athlete will hear the details of the court’s order that he be sent for mental observation. Last week Judge Thokozile Masipa indicated that it might be preferable for Pistorius to be observed as an out-patient of a facility. Today we should hear whether that’s happening, and the details of the team assigned to assess Pistorius’s mental state. By REBECCA DAVIS

09.00 One wonders what Oscar Pistorius’s feelings are today. On the plus side, he knows he doesn’t have to brace himself for the spectacle of his defence team’s witnesses being subjected to a bruising interrogation by the state’s Gerrie Nel. On the downside, Judge Masipa’s order that he be dispatched for psychological evaluation is likely to mean that court proceedings will have to be postponed for at least a month – and in the interim he will be spending a lot of time in one of the state’s overburdened psychiatric facilities.

Last week we explained a bit about some of the potential outcomes for Pistorius’s observation.

ENCA reports that part of what we’ll be hearing from the court today is the composition of the panel of experts who will be observing Pistorius, which is likely to include the hospital’s medical superintendent, a psychiatrist for Pistorius and at least one other court-appointed psychiatrist.

University of KwaZulu Natal academic Dr Jackie de Wet told the Citizen that despite Judge Masipa’s stated wishes, de Wet believed it most likely that Pistorius would be admitted to a psychiatric hospital as an in-patient.

“You have to observe him every day in group sessions and individual interviews, but his free time must also be observed,” de Wet told the newspaper. “How he interacts with other people, which even includes the orderlies and cooks.”

10.00 After a delay during which Judge Masipa was apparently consulting with counsel in chambers again, the judge has delivered the court order. Oscar Pistorius will indeed be observed as an out-patient, and will not have to stay overnight at the Weskoppies psychiatric hospital in Pretoria.

Pistorius will nonetheless have to put in seven hours a day at the facility, from 9am to 16h00 every weekday, for 30 days. His observation begins next Monday, 26th May.

He will be assessed by a team of four experts, which includes one psychiatrist nominated by the defence. They will be permitted to read the court record of the trial thus far to guide their assessment. What they will be assessing primarily is whether Oscar Pistorius was aware of the wrongfulness of his actions at the time of the shooting, and whether he was capable of acting in accordance with that awareness.

Here’s a bit more detail on the three psychiatrists and one psychologist who’ll be evaluating Pistorius:

Leon Fine, the defence’s choice of psychiatrist, has a speciality in anxiety syndromes and “extensive experience” in giving evidence in court.

Prof Herman Pretorius is one of two Weskoppies psychiatrists appointed by the court to assess Pistorius. In a previous high-profile case he was tasked with assessing a Baviaanspoort prisoner who slit two nurses’ throats. Pretorius told the court in that instance that there was no sign the accused was unable to appreciate the wrongfulness of his deeds.

The other Weskoppies psychiatrist on the matter will be Carla Kotze, who has also testified in some noteworthy cases.

Rounding out the team is psychologist Jonathan Scholtz, who is an Adjunct Professor at the University of Pretoria and the head of psychology at Weskoppies.

It’s clear, in other words, that Pistorius’s mental observation is being undertaken by a team with substantial expertise and experience. Nonetheless, the decision of the court to have Pistorius observed as an out-patient is inevitably causing mutterings that the athlete is the recipient of special concessions: lawyers agree that it’s certainly not normal for an accused in a matter like this to be granted out-patient status.

Among the concerns raised are that Pistorius’s sleeping patterns and interpersonal dynamics (with other patients rather than psychiatrists) may not be assessed if he is an out-patient, and that even seven hours a day may not be enough time to carry out a comprehensive evaluation.

Judge Masipa has indicated, however, that the daily hours can be extended if necessary. It remains to be seen if the 30-day period could also be extended. In the case of the ‘Modimolle Monster’, Johan Kotze – accused of orchestrating an attack on his ex-wife and her son –  a Weskoppies psychiatrist won his request for Kotze’s observation period to be extended for another month.

When the experts have completed their report, copies will be sent to the registrar of the North Gauteng High Court, to the National Director of Public Prosecutions and to Pistorius himself.

The facility to which Pistorius will be reporting, Weskoppies Psychiatric Hospital, is the biggest in the province. It started life in 1892 as the “Pretoria Lunatic Asylum”: a “place of detention of lunatics and the mentally deranged”. Like most Apartheid health facilities, it featured separate wards for black and white patients for much of the twentieth century, but by 1991 integration was complete.

A Wiki page on the subject of the hospital describes the grounds:

“Trees line the roads and create a forest and a sense of isolation from the rest of the world. You are however, reminded of the fact that you are actually in a mainly industrial area in Pretoria the closer you get to the gate.  There are indeed large lawns that in summer are pleasantly green.  The tennis courts and bowls green are in bad condition and the soccer field unattended to.”

Court proceedings are now scheduled to resume on Monday, 30 June. The defence is thought to have just three witnesses left, of which one is yet another psychologist. When the defence’s case closes, there will be a a break for both sides to prepare closing arguments – which could take over a month again. In other words, we’re looking at being well into the second half of the year before we finally hear Oscar Pistorius’s fate from Judge Masipa.

Curious Kids: Do flies really throw up on your food when they land on it?