Analysis: New kids on the block head to Parliament 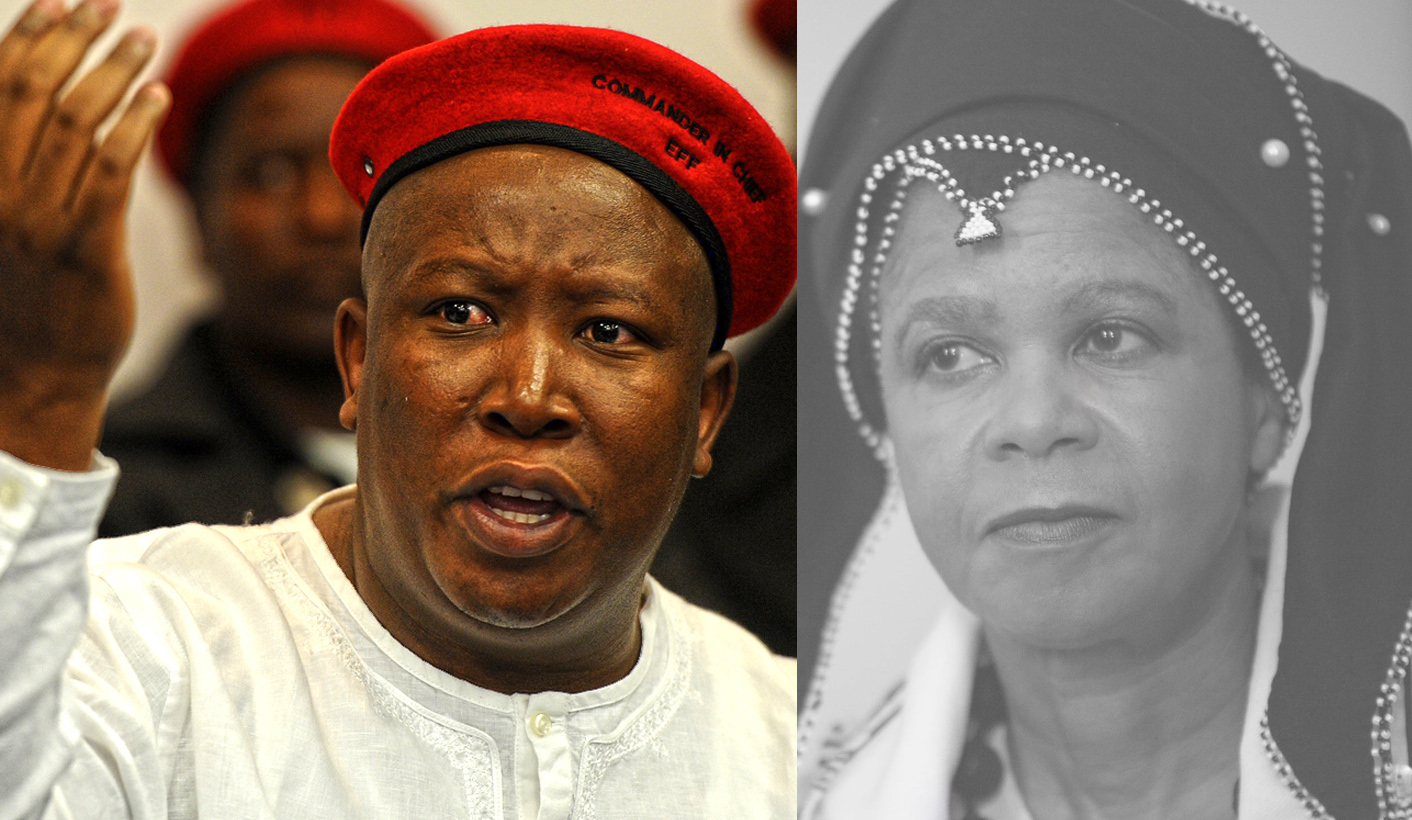 Two new parties, never previously contesting an election, launched relatively late in the day. One went on to confound skeptics’ predictions, ending up with a solid 25 Parliamentary seats. The other has just two to play with. EFF and Agang are readying to send their new Parliamentarians off to Cape Town for Wednesday’s swearing-in ceremony. But even at this late hour, it’s unclear who will be taking up Agang’s two seats after leader Mamphela Ramphele announced that she would be giving Parliament a wide berth. By REBECCA DAVIS.

And if she finds herself in Parliament one day, the lone member of her party of one, like Helen Suzman, she could well be the thorn that hurts the most in the present government’s side.

That’s what publisher Jane Raphaely wrote about Mamphela Ramphele in O Magazine last August, echoing the hopes of many. Agang ended up being a party of two – seats in Parliament, that is – but Ramphele will be no Suzman.

Ramphele’s announcement last week that she would not be taking up a Parliamentary seat was received with distress by many Agang supporters, who had been taking to Twitter with the hashtag #GetMamphelaInTheHouse in the days preceding the elections. As recently as 25 April, Agang’s Facebook page encouraged the country to “send the strongest anti-corruption team in politics to Parliament”, running a banner featuring said team: crusader Paul O’Sullivan, advocate Jock McConnachie, whistleblower Mike Tshisonga, lawyer Andrew Gasnolar – and Ramphele herself.

Voters who took that on faith now face having just one of that bunch – Mike Tshisonga – representing them in the National Assembly. Lack of seats aside, Paul O’Sullivan parted ways with Agang the Friday after elections to “continue to devote his full attention to fighting against corruption as a private forensic investigator”.

Explaining her decision not to go to Parliament, Ramphele said that she had always considered herself the bridge to a new generation of leaders. But perhaps a more immediate reason is found a few paragraphs down in her statement: “After such a taxing journey I do need some time and space to settle my mind and body, enjoy time with family and friends, and reconnect with a personal world I have not had time to enjoy for a considerable time now”.

Maybe it’s the repetition of what she wanted to “enjoy” that has particularly grated with Agang supporters, even though Ramphele is fully within IEC rules in not going to Parliament. “We voted Agang SA so that she can be our voice in parly and now she is too tired to take a seat in Parliament,” was a pretty typical disenchanted voice among many on the party’s Facebook page over the past week, while others voiced disappointment at not having Ramphele get to work on specific Parliamentary committees, such as Higher Education.

Agang spokesperson Mark Peach has repeated that Ramphele is “exhausted and needs a rest”. It appears, though, that the blow Ramphele has suffered through her party’s dismal performance may be more emotional than physical. The Star reported last week that Ramphele stormed out of a discussion about the Parliamentary seats, saying “I feel used, I am tired, I am broke and my children are saying I must just leave this.”

(Given Ramphele’s stated net worth of R55 million, which was claimed to be an undervaluing by as much as R450 million, it’s to be hoped that her profession of being “broke” was hyperbole.)

Whoever runs the Agang Facebook account has been freely dispensing insights into Ramphele’s psychological state at the moment, explaining to numerous disgruntled supporters: “Because of what happened with the DA saga she feels it is her fault we did not do well and the decision to not go to parly will be time spent on the ground with citizens, serving”.

Exactly what form the “service” will take is unclear at this stage. Agang members in Gauteng passed a motion of no confidence in Ramphele on Friday, reportedly led by deputy president Andries Tlouamma, though spokesperson Peach has repeatedly denied that Ramphele is stepping down from the party for good.

One source of the dispute – though frankly, there are multiple possibilities – seems to be the question of who will take up Agang’s two seats in Parliament. Initial reports had it that Ramphele wanted young lawyer Andrew Gasnolar to fill one of the posts, with the Gauteng branch preferring deputy president Andries Tlouamma. Ramphele went on to release a statement definitively naming Mike Tshisonga and Agang’s National Youth Forum Co-ordinator Nyameka Mgozulu – but the IEC apparently has it down that it’s Tlouamma, and not Mgozulu, heading for Cape Town.

Tlouamma would be the expected pick, since he was second on the party’s pre-election list, whereas Mgozulu was 9th. Perhaps Ramphele specifically wanted a young female representing the party, since she claims to be handing on the reins to a “new generation”, and Mike Tshisonga is no spring chicken.

Mgozulu is a former spokesperson of the ANC Youth League in the Western Cape, who joined Agang just a few months before elections. If sent to represent Agang, the party says she will be one of the youngest Parliamentarians ever. Intriguingly, her fiancé is Loyiso Nkohla – best known for coordinating Cape Town’s poo protests over the past year.

On Monday Tlouamma was stating that it was indeed he, and not Mgozulu, who was taking up the coveted seat. But nobody was answering the phone at Agang HQ, and spokesperson Peach was staying mum. Perhaps Tuesday – which is the deadline for finalising seats – will bring clarity.

It doesn’t seem that there will be any surprises from the EFF’s side, though their Gauteng premier candidate Dali Mpofu has indicated that he won’t be going to the Gauteng legislature because the Marikana Commission is reaching a critical stage. Leader Julius Malema has said that the party will be filling its 25 Parliamentary seats as per their pre-election list. Malema is in the top spot, with the second taken by former MK fighter Paul Ramakatsa, who was embroiled in a legal tussle a few years ago with Tokyo Sexwale over funds designated to support former political prisoners.

Other prominent names in their top 10 include Malema’s former ANC Youth League comrade Floyd Shivambu and feisty EFF spokesperson Magdelene Moonsamy. From the North-West, the EFF have confirmed that they are sending Marikana Women’s Group leader Nokulunga Primrose Sonti. Sonti, the mother of one of the miners arrested after the Marikana massacre, has been interviewed by the Daily Maverick on a number of occasions.

One EFF member who got more than his fair share of media attention in the run-up to elections, but who missed out on a seat at number 30 on the party list, is Wiekus Kotze – better known as “the white EFF guy”. They’ll just have to keep the revolutionary fires burning in Parliament without Wiekus.

What awaits the EFF Parliamentarians, like all the others, is a lot of boring, tedious hours spent in Parliamentary committees. Malema has already said that he intends to get himself on to the committee looking into President Zuma’s response to the Public Protector’s report on Nkandla. (That is, of course, if the committee is reconstituted – and you might not want to put a huge amount of money on that.)

Malema has also said that upon EFF’s arrival in Parliament, the party will begin immediately lobbying for Parliament to move to Tshwane, for the expropriation of land without compensation, and the nationalisation of mines. Those 25 seats look set to be filled with loud voices.

The question on all our lips, though, is whether the party will follow through with its promise that its Parliamentarians will wear red overalls to work. In fact, Malema has said that the EFF MPs will also wear hard hats – and its female MPs may arrive for the swearing-in ceremony on Wednesday in domestic worker uniforms. Anything goes for the swearing-in, but once that’s completed, Parliamentarians are not allowed to wear political party branding during sittings of the National Assembly. Parliamentary spokesperson Luzuko Jacobs has been making slightly nervous-sounding noises upholding Parliamentarians’ right to personal expression in dress, but stressing the dignity and decorum of the space.

The last person to really push the boat out when it came to Parliamentary dress was, of course, Nelson Mandela. It remains to be seen whether EFF’s sartorial statement will be greeted as affectionately. DM