Storm warning: Post-election gale-force winds hit the DA and head for the ANC 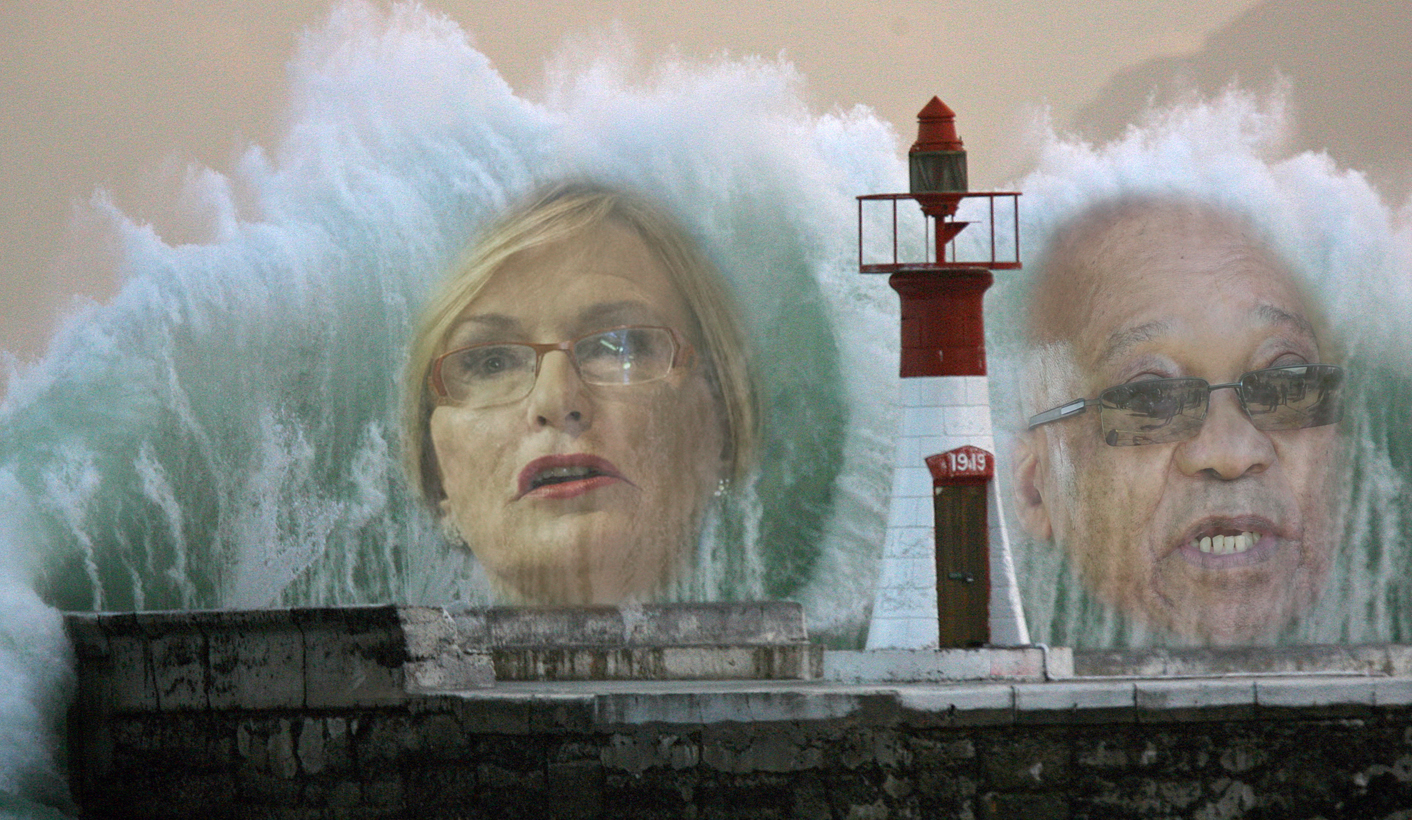 It might be difficult to remember now, but the fallout in the ANC which led to the eventual expulsion of Julius Malema began shortly after the 2009 elections. Election periods lead to parties closing ranks and all forces pulling together to achieve the best results. But the post-election period is when the guts and gore are exposed. The honeymoon is over and any pretence of unity is shattered by ambitious and strategic moves to get ahead. This year, the Democratic Alliance beat the ANC to it, with the fallout over Lindiwe Mazibuko’s departure shaking the party to the core. There is a lot more of that coming in the ANC and the DA, and even Malema’s red army will not be immune to internal machinations. By RANJENI MUNUSAMY.

Perhaps it is an indication that the Democratic Alliance (DA) is finally a fully-fledged political party with a massive leadership battle brewing and that a decision by a senior member to take timeout is able to lead the main Sunday newspaper in the country – on the biggest political weekend of the year. The façade is now shattered that the DA is like a box of Smarties, full of merry people of all colours spreading joy and happiness.

The DA can perhaps be grateful that the story of its former parliamentary leader Lindiwe Mazibuko did not break before the elections, as there could have been serious consequences at the polls. Mazibuko has over the past three years worked hard to build a reputation as a strong, feisty voice in Parliament and has become one of the country’s most dynamic politicians. Her quick ascent and success in keeping the opposition robust has also turned out to be the reason she has earned powerful enemies, inside and outside of the DA.

It is the enemy within however which seemingly drove Mazibuko to look for a reprieve from the hurly burly of South African politics – through an opportunity to study at Harvard University. While the official line from DA leader Helen Zille and the party has been to wish her well and play down the fallout, claiming that all would be well when Mazibuko returns from the United States in a year, the skeletons are now following out of the DA’s ample closet.

The DA has been forced to switch to damage control mode after a “tell-all” column from its former communications head, now Business Day columnist, Gareth van Onselen. In the column, Van Onselen claims that there is a “deep and fundamental divide” between Mazibuko and Zille, and that Mazibuko was sidelined in the DA’s election campaign in favour of the national spokesman Mmusi Maimane.

“In her (Mazibuko’s) place, a golden highway was paved for Maimane, Zille’s heir apparent and the ultimate yes-man. The party’s Gauteng campaign was used to create a platform for his progression and he will now, inevitably, be anointed parliamentary leader — the first time a DA politician has become parliamentary leader without ever serving in Parliament, testament to Zille’s inability to maintain unity in her own caucus,” Van Onselen wrote.

Mazibuko has maintained a steely silence since her announcement through the Sunday Times that she would no longer lead the DA caucus in Parliament, and has not refuted Van Onselen’s claims. Her silence on that matter speaks volumes as she is letting the DA leadership navigate the crisis on its own. Off the record, many senior DA leaders say Van Onselen, though swinging the axe he has had to grind, is not far off the mark.

The DA’s communications director Gavin Davis has now responded to Van Onselen, writing that while it was true that Mazibuko and Zille’s relationship “did become strained towards the end”, this was “not irretrievably so”. He said it was “disingenuous” to claim Mazibuko was shut out of the campaign as she had been away for six weeks on sick leave and was given prominence once she returned.

“What many people do not know is that Lindiwe was the first in our party to be asked to avail herself for the nomination of Gauteng Premier candidate. She declined, later telling people that she turned it down because she saw it as an attempt to ‘sideline’ her,” Davis wrote.

“Had Lindiwe been chosen as the Gauteng Premier candidate, the same resources would have been put behind her. The decision to focus on Gauteng was a strategic one taken by party structures on which Lindiwe sat, and agreed; it had nothing to do with who the candidate was or any future internal elections. To say otherwise is paranoid and delusional.”

Davis also intimates that Mazibuko opted out because of the prospect of losing the parliamentary leadership battle. While that might be true, the problem for the DA is that nobody, including Maimane, in the now extended caucus who can keep the momentum that Mazibuko established. Although the party would want to continue to have a black person as its parliamentary leader, to keep up the image that it is a transforming party, in truth, they do not have a leader of any race with the strong character, voice and respect that Mazibuko commanded.

Maimane seems to be the natural choice to fill the role but he has to start from scratch to build up a reputation in parliamentary politics, in which he has no experience. The DA is however hoping that Maimane would be more endearing to grass roots constituencies than Mazibuko was, as she apparently turned people off with her assertiveness and brazen style. What Mazibuko’s detractors do not realise though is that this is playing into the conservative trap and gender stereotypes. The DA could have done wonders for the gender transformation project by standing behind a bold black woman leader instead of trying to trade up for a “nice guy”.

Mazibuko’s departure, whether temporary or not, is also a setback for racial transformation in the DA. With her gone, the party is exposed for not having an array of other black leaders with mass appeal. Maimane simply cannot be trundled out for every prominent position going, including the leadership of the party. If the DA is the non-racial party it claims to be, surely there should be a selection of senior black leaders to deploy to high profile positions. There truth is there isn’t.

But the DA is not the only party with internal ructions. Storm clouds are also heading for the ANC, particularly the Gauteng leadership, following the drop in support in the elections.

ANC secretary general Gwede Mantashe admitted there would be an intervention from the national leadership in Gauteng to assess why the party performed below their expectations in the polls, despite wall-to-wall campaigning and the deployment of the party’s top leadership to assist with canvassing support. Mantashe however refuted suggestions that the provincial executive committee in Gauteng could be disbanded as a result of poor showing at the elections.

The Gauteng ANC leadership had to contend the native impact of e-tolling on their constituency and the fact that the middle class, which forms a significant part of the population of province, was turned off by the scandals which plagued the ANC government, particularly the security upgrades at Nkandla. The image and utterances by President Jacob Zuma also gave them trouble on the campaign trail.

Despite the national leadership being aware of these heavy crosses to bear, the election results could provide a basis for Luthuli House to deal with the renegade provincial leadership. It has not been forgotten that the Gauteng leadership led the campaign to have Zuma replaced as the ANC leader at the party’s Mangaung conference.

There are also lingering suspicions about whether the ANC Gauteng leadership had been aware that members were planning to boo Zuma at the Johannesburg memorial service for Nelson Mandela in December. The incident remains a source of humiliation, and although the Gauteng leadership has distance itself from the incident, there is still disbelief in some quarters that the booing was spontaneous and not orchestrated.

The ANC leadership in the Western Cape could also be in for a shakeup. Mantashe said they were also disappointed by the party’s performance in the province as the 32.89% was “not equal to effort we put in there”.

The ANC placed an embargo on all provincial elective conferences until after the elections to prevent divisive battles impacting on the party. The ANC Youth League is also due to hold an elective conference as it has been led by an interim task team since April last year. The battles raging in Cosatu are also set to resume after the ANC negotiated a temporary stay ahead of the elections.

In 2009, trouble started brewing in the ANC when the then ANC Youth League president Julius Malema started talking about succession issues and favoured Fikile Mbalula to replace Mantashe as ANC secretary general and Kgalema Motlanthe to succeed Zuma. It remains to be seen how long it would take this time before the succession race for the ANC’s 2017 conference ensues.

Malema and his Economic Freedom Fighters (EFF) will also not be immune to post election turbulence. With the party heading to Parliament and all nine provincial legislatures without having elected structures, jockeying for positions and power are bound to set in. The party achieved an impressive feat by garnering 6.35% of the national vote with minimal organisational machinery and little resources.

However, now the real work begins to build the EFF beyond the militant talk and the focal point of the elections. It will be difficult to keep the momentum going in building support and also concentrating on the work of Parliament. The EFF will hold a national elective conference in December and this will also result in internal battles for positions. It will be a test of Malema’s leadership in terms of how he manages all of these internal dynamics and still keep the heat on the ANC.

There is also the small matter of trying to achieve economic freedom in his lifetime.

So if you thought that after the election, the political commotion is over, think again. There is a lot more to come – messy, brutal, disturbing and crazy.

And this is just the internal dynamics of the three biggest parties. Just wait until the brawling against each other begins.

Blade Nzimande versus Mmusi Maimane versus Julius Malema? Coming soon, at a parliamentary channel near you. DM