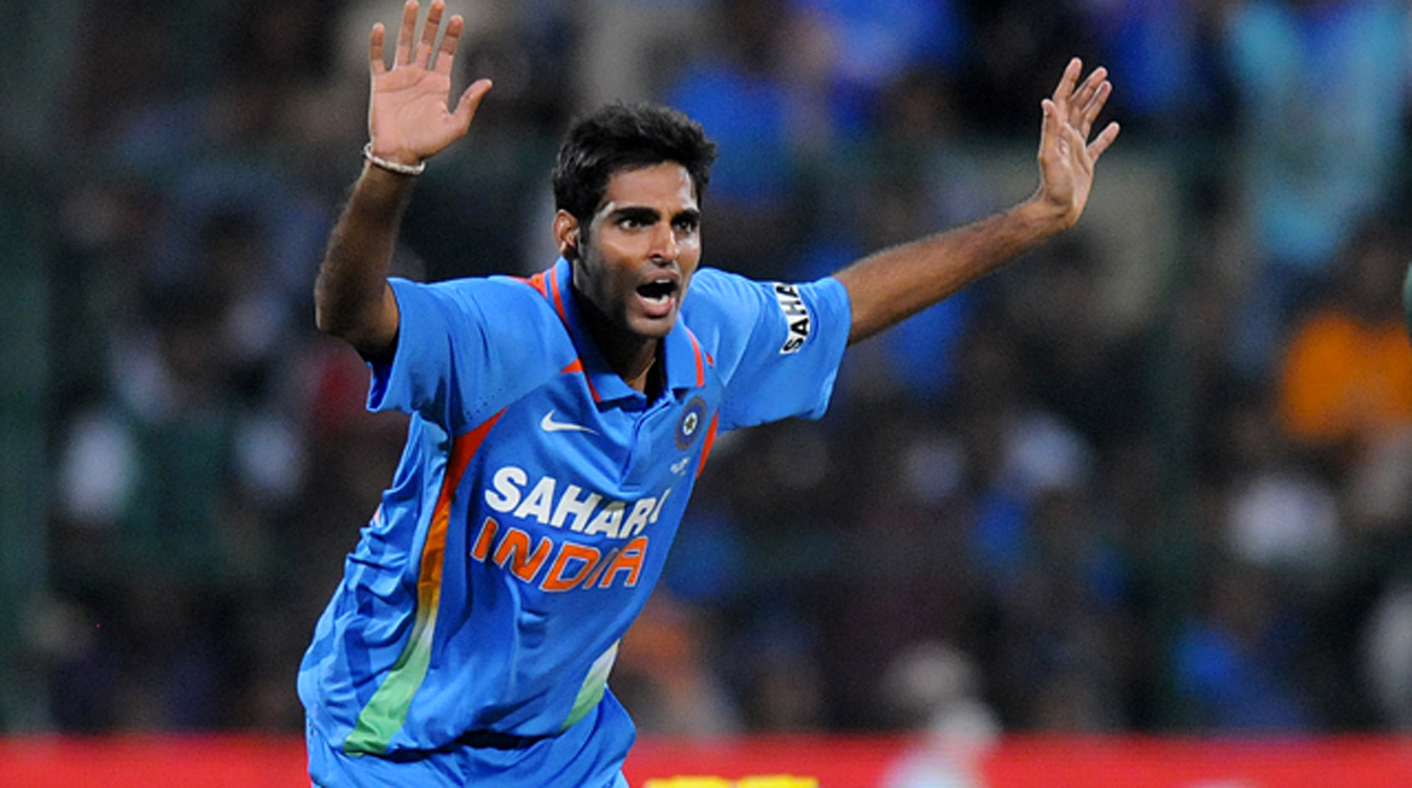 Bhuvneshwar Kumar is having a stellar outing in this year’s Indian Premier League. Paired with the express pace of Dale Steyn, his ability to swing the ball both ways in almost all conditions has been phenomenal to watch. He’s got a long future ahead of him, as long as he learns how to operate independently as a swing bowler, when he doesn’t have a fast bowling partner in crime to help him out. By ANTOINETTE MULLER.

In the Twenty20 format, it’s mostly batsmen who are showered with plaudits. The format lends itself to the thrill of a tight chase and the magic of inventive batting. It’s not to say that bowlers are ignored, but they often have to work far harder than their batting colleagues to be celebrated at the same level.

The Indian Premier League is not much different. The noise cauldron might be more intense, but if you can sift through that, you can find some great tunes. One player who has been playing the right tune is Bhuvneshwar Kumar.

Currently the second leading wicket taker with 17 scalps at an average of just 11.41, he has been one of the true the delights of the competition.

But Kumar is hardly a new face on the global cricket stage, having made his debut for India in 2012. It came on the back of a successful few years in domestic cricket, which included becoming the first-ever bowler to dismiss Sachin Tendulkar for a duck in domestic cricket.

He does not have express pace and his doe eyes are hardly intimidating. But it’s that passive nature that has led him to become one of the most promising youngsters around. He is a silent assassin, who can swing the ball both ways in almost all conditions. It’s a prized skill to possess and while many would like to see him crank up the pace, Kumar is not one for following others.

“My strength is not pace. I rely on swing to get wickets and I continue to do it that way. I have never tried to copy others. I have never looked at the other end, that my partner is working up good pace or not. I just want to bank on my strength and I do that,” he told PTI.

Bowling can often be something which is over-complicated, both by coaches and players. Players who try to mimic others, be it through style of bowling or action, often end up with injury issues because they are trying to force their bodies into doing something that isn’t natural. Coaches who try to adjust players’ run-ups and actions also often end up doing more harm than good. While coaches can often find a yard or so of extra pace by making small tweaks, this is not something which can actually be taught. Therefore players like Kumar, who understand that sticking to the basics and working on getting better at the basics, are a superb asset for any side.

“It’s all about doing the little things right. It doesn’t matter what form of cricket you are playing. Just keep things simple and you will succeed. I have just concentrated on pitching the ball right and have done well so far,” Kumar explains.

That understanding of skill sets is even more impressive for somebody who took to the game quite late, at age 13. With his father too busy at work to take him to cricket practice and his mother having very little understanding of the game, it was his sister who encouraged his career growth and who took him to his first-ever cricket coaching centre.

Kumar had an interest in the game since he was a kid, but it was only when he was in his early teens that his sister took him around to coaching and sports shops to get his equipment. Rekha, seven years his senior, also knew that cricket is a way of life, and even had a word with his teachers to not put too much pressure on young Bhuvneshwar at school.

“The whole process, Steyn going to his run-up, his mindset, his strategy, his follow through, his discipline, everything is a learning in itself. And I am lucky to see him from close quarters,” he said.

Once the IPL is over, Kumar can look forward to one of the most exciting outings of his career. India’s next big assignment is a trip to England in July. With conditions in the country greatly suited to swing bowling, the 23-year-old has much to look forward to.

The last time India visited, they were embarrassed 4-0. Both teams have since undergone transitions. Last year, while England were beaten 5-0 in Australia during the Ashes, India held their own in South Africa during a two-match Test series. Both teams have a group of young players eager to make a name for themselves. Kumar is one of those youngsters and while he has had average returns in Test cricket thus far, he is clearly reaching a stage of his career where he is coming into his own. There will be much expectations on the swing king, especially since he will be one of the leaders of the Indian attack.

While bowling fast is a great skill to have, it’s something that’s currently in Kumar’s Modus Operandi. Since pace is something which simply comes naturally, it would be unfair to expect Kumar to crank it up to 145km/h beamers. He doesn’t need to. He is already forging himself a reputation as being one of the most economical bowlers in limited overs cricket. The wickets that come as a result of that low economy rate will always be more in limited overs, because there is far more pressure on batsmen to hit out when the run rate is slowing. In Test cricket, a low economy rate does not always equal a bunch of wickets. This is where back-up from more aggressive bowlers comes in handy, and it’s something that has worked really well for him in the IPL.

When he is paired with an express pacer, like Steyn at Hyderabad, he is exceptional. With no true pace bowler in the Indian team at present, the biggest challenge for the 23-year-old will be learning how to operate independently as a swing bowler.

Many before him have had exceptional skills, but have often fallen by the wayside due to no support bowlers or not developing their skills full potential. For a youngster of Kumar’s ability, the cricketing world would hope that he doesn’t just end up being another case of what could have been. DM