SA votes 2014: Finished, but not quite klaar 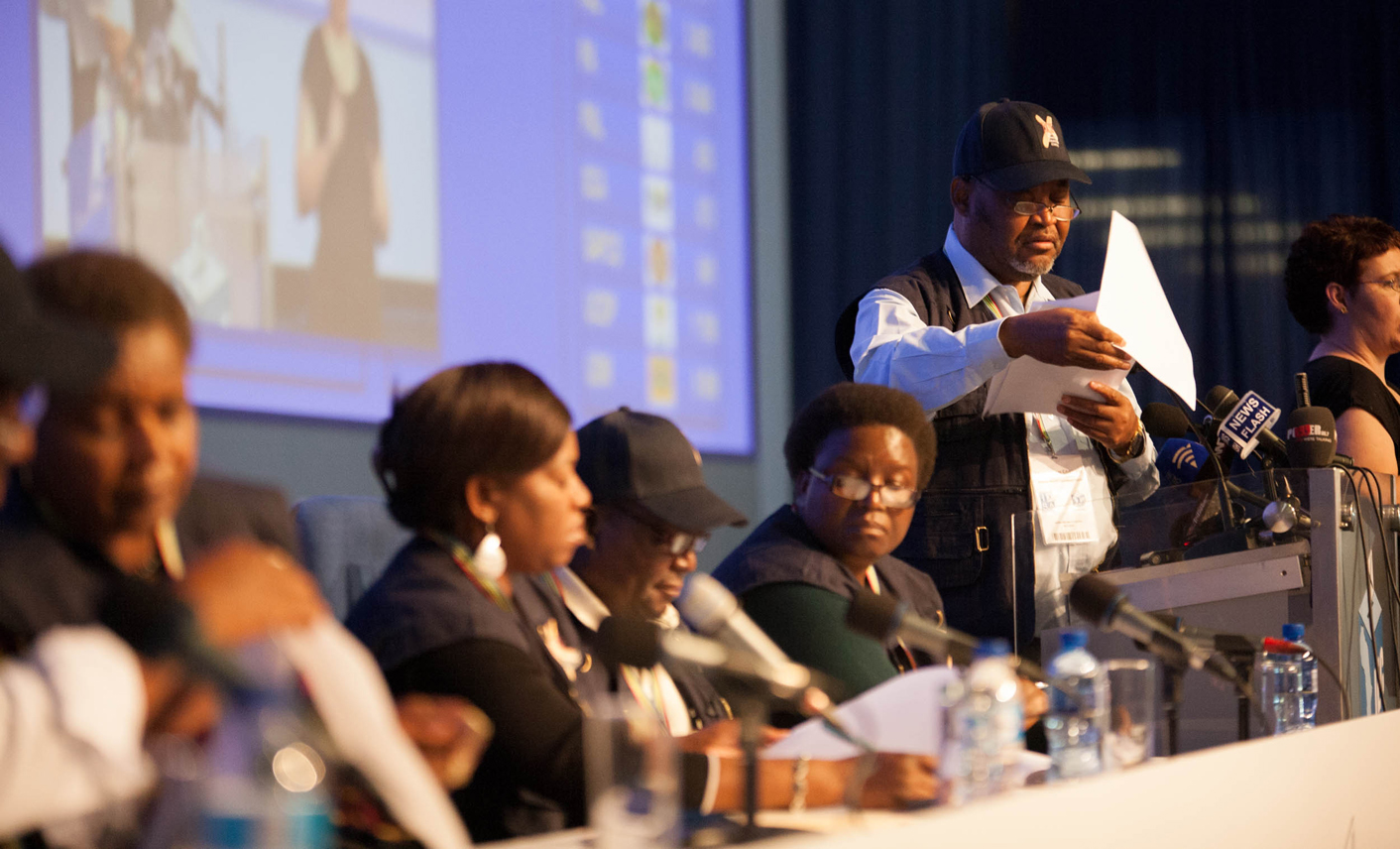 The final tallies are just about in, and the tired politicians are resigned to their fates. There will be no more surprises, and parties are already pushing their post-election spin – which, if one were to swallow every well-crafted line, means that everybody won. Meanwhile, the IEC is basking in the glow of a resounding endorsement of the conduct of the election it worked so hard to organise. By SIMON ALLISON.

The results of the 2014 South African election will be announced at 6pm on Saturday, according to IEC chairperson Pansy Tlakula. The journalists, officials and party agents assembled at the Results Operation Centre (ROC) stifled a groan as she relayed this news – no one’s had much sleep, and we were all hoping to finish things off on Friday. There are, however, still outstanding votes to be counted: some have been held up by legal challenges (there are four: blame the EFF, DA and UDM), while the international votes haven’t all arrived yet. We suspect a postal strike.

All three of these parties have reason to be satisified with their performance. For the ANC, there’s relief that they did not receive the bloody nose that Nkandla threatened to deliver. Their victory party will be tomorrow at the final announcement – as you read this, Jacob Zuma’s speechwriters are crafting yet another interminably boring address. (The after-party, just in case you’re interested, is in Library Gardens next to Luthuli House. Uhuru, Doctor Malinga and AKA will headline).

While the DA did not do as well as it had perhaps hoped, their growth is still remarkable. Their voter base grew by 33.7% since 2009. This translates as 1.1 million new voters – 700,000 of whom are black, as Helen Zille kept emphasising (although it’s still unclear quite how they reached this demographic breakdown). “People’s political attitudes are changing…more and more people are moving away from race as a voting determinant,” she said.

Zille was less impressed with her one-time political partner Mamphela Ramphele, whose Agang SA fared miserably in the polls, securing just one seat (and only just that). Zille argued that Ramphele was a victim of her own bad decisions, and that she has now “destroyed her political brand”. Zille also categorically denied the rumours that the DA and the EFF might be tempted to form a political coalition, although she did say that the DA would cooperate with the EFF on an issue by issue basis (“If there was a vote of no confidence in Zuma, and the EFF were to support that, we wouldn’t object…”). Curiously, Zille’s rationale for refusing to join forces in a coalition with the EFF is that “it’s much better to be a strong opposition than a bad government”. As a veteran opposition leader, she would say that.

A less satisfied press conference was given by COPE leader Terror Lekota, who bizarrely insisted that “COPE has arrived and is here to stay”. No Terror; it arrived in 2009, and has spent the five years since then retreating rapidly back into the political wasteland from which it emerged. It’s only going to get three seats in parliament, down from 30 in 2009 – this the electorate’s humiliating rejection of COPE and its leader.

To his credit, however, Lekota not only braved the cameras (unlike Ramphele, who is still AWOL), but even made good on his promise to “eat his hat” if his party performed worse this time round, taking a theatrical bite out of a grey flatcap. “Special branch knocked all my teeth out,” he said, explaining why he didn’t chew.

While the politicians spun their spin, the IEC was enjoying strong words of commendation from the international observer missions. Given the controversy that dogged chairperson Pansy Tlakula before the vote, this came as a huge relief – in the event that parties make good on their pre-election threats to challenge the legality of the election (EFF, we’re looking at you), the verdict of the observers will play an important role in determining its legitimacy.

The observers were unequivocal in their praise. “The Mission’s preliminary conclusion is that the 2014 National and Provincial elections of South Africa were held in a conducive environment which allowed the electorate to effectively participate in the electoral process and to exercise their right to vote,” said the statement from the African Union observer mission, headed by former Ghanaian President John Kuffour. It came to the prelimary conclusion that the elections were “free, fair, transparent and credible”.

A similar sentiment was expressed by the SADC electoral observer mission. DM